It predominantly occurs in young individuals that are in the second to fourth decades of life.

It affects men and women equally.

APMPPE is usually bilateral, but it can be quite asymmetric and the second eye may not become involved for several weeks after the first eye.

APMPPE is idiopathic, but it has been associated with mumps, secondary syphilis, Lyme disease, streptococcal group A infection and anti–hepatitis B virus vaccination.

The disease has also been called acute multifocal ischemic choroidopathy.

The degree of visual impairment can be variable depending upon the location of the lesions.

Visual loss is due to macular involvement, and there is usually a gradual improvement in vision over the course of a few weeks.

Systemic signs include a flu-like syndrome and headache.

On fundus examination during the acute phase, the lesions are characterized by multiple yellow-white deep plaques, ranging from one-half to one optic disk diameter in size.

Lesions appear to be at the level of the outer retina and the RPE even though the ischemic alterations involve the choriocapillaris.

After a few days, healing starts at the center of the plaques, leaving a pigmented scar or mottled RPE.

New lesions can appear in the posterior pole within the first 3 weeks of disease onset.

Optical coherence tomography (OCT) demonstrates nodular hyperreflectivity at the level of the photoreceptors and RPE.

Interestingly, the electroretinogram (ERG) and electrooculogram (EOG) are normal.

Usually no treatment is required.

In patients with macular involvement, systemic corticosteroids can be initiated to hasten visual recovery and immunosuppressive agents are rarely required.

The prognosis is good with a visual acuity of 20/25 after 6 months although small scotomas may persist.

Recurrences or exacerbations are rare.

Macular localization may be more aggressive.

Figure 8-2. Fluorescein angiography (FA). The early frame shows hypofluorescence (A), and the late frame shows staining and pooling (B).

Figure 8-3. ICG demonstrates hypofluorescence in both the intermediate (A) and late (B) frames.

Figure 8-4. Color fundus photographs in a case of APMPPE with bilateral involvement.

Serpiginous choroiditis is a rare cause of posterior uveitis (<5% of cases in uveitis clinics), and usually occurs in the fourth to seventh decades of life.

The disease is a chronic, progressive, recurrent inflammatory or infectious condition.

Most patients present with unilateral vision loss, but on examination usually have bilateral disease.

The geographic distribution is worldwide.

The etiology is unknown, but autoimmune and infectious hypothesis have been proposed (herpes viruses and TB).

There is no human leukocyte antigen (HLA) association.

Patients with macular involvement or CNV are usually symptomatic and may have metamorphopsia, scotoma and sudden vision loss.

The main finding is a peripapillary choroiditis that has a characteristic serpentine appearance. In some cases, it involves the macula while sparing the peripapillary region.

The lesions are typically not multifocal as opposed to ampiginous or tuberculous serpiginous-like choroiditis.

The areas of active choroiditis appear gray or white-yellow. They often appear to elevate the overlying retina.

The active lesions spontaneously resolve after 6 to 8 weeks and result in atrophy of the RPE and choriocapillaris. Inactive lesions appear as pigmented and atrophic scars that are usually connected to the optic disk.

Patients may have recurrences months to years after the initial lesions and the reactivation occurs at the edges of the previous lesions.

One-third of affected individuals have mild inflammatory cells in the posterior vitreous. Rarely is inflammation seen in the anterior segment.

Occasionally patients may have RPE and serous retinal detachments.

White dot syndromes: APMPPE or ampiginous choroiditis (which have a multifocal presentation of lesions)

Tuberculous serpiginous-like choroiditis (TB-SLC): Patients with TB-SLC come from areas in which TB is endemic, have significant vitritis, and usually have multifocal lesions in the periphery and posterior pole. Patients with serpiginous choroiditis have little to no vitritis, have bilateral involvement, and have a larger, more confluent lesion, which extends mainly from the disk and usually is confined to the posterior pole.

If no CNV is present:

CNV in these cases shows the typical signs of a classic CNV: well-defined early hyperfluorescence with leakage in the late phase.

Hypoperfusion of the choroid is more extensive than shown by FA. It appears as a primary inflammatory choriocapillaropathy.

Lesions not seen on the FA can be apparent on ICGA.

Visual fields can be useful to identify scotomas, which can be absolute and/or relative. The visual field deficit can vary over time.

It is important to exclude TB with a tuberculin skin test (PPD), chest radiograph, and/or interferon-gamma releasing assays (e.g., QuantiFERON), especially before any immunosuppressive therapy is instituted.

Patients with an active inflammatory component benefit from treatment.

Corticosteroids: High-dose systemic steroids, as well as periocular steroids, can be used to control acute inflammation.

Treatment must be adapted to the severity of each situation and must take into account the potential side effects.

Active disease with CNV: Cortico­steroids and immunosuppressive agents are usually used along with other adjunctive measures.

The prognosis depends on macular involvement and complications including CNV formation.

Unilateral or bilateral severe visual loss may be observed in 25% of cases.

Figure 8-5. Color fundus photograph (A) and red-free photo (B) show the sequelae of choroiditis. Note the geographic pigmented and atrophic scars connected to the optic disk. C. The early frame of the fluorescein angiogram shows hypofluorescence likely due to limited perfusion. D. The late frame demonstrates staining and with a hyperfluorescent border, characteristic of inactive serpiginous. 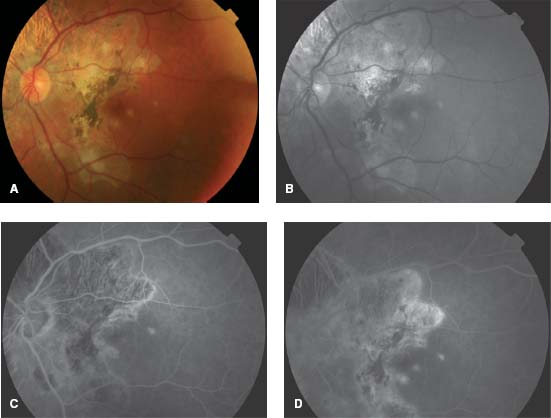 Figure 8-6. This patient with a previous diagnosis of serpiginous chorioretinopathy came in with further vision changes. A. The color photograph reveals darker areas consistent with earlier scarring, as well as yellow areas of active chorioretinitis. B. The early frame of the fluorescein angiogram reveals RPE window defects in the area of previous scarring. The new lesions block early. C. The new lesions stain in the late frames of the angiogram. (Courtesy of MidAtlantic Retina, the Retina Service of Wills Eye Institute.) 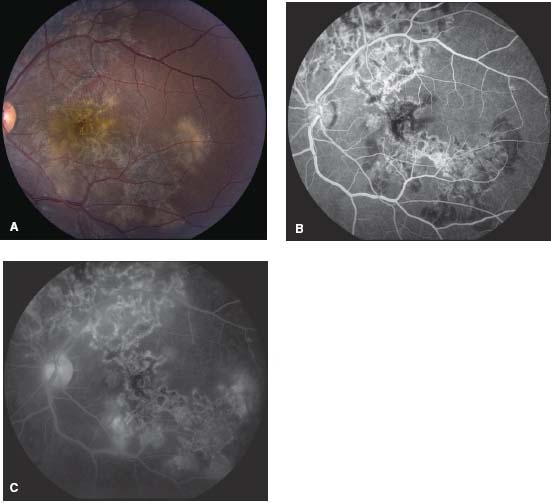 Figure 8-7. A 27-year-old woman had serpiginous choroiditis that progressed despite numerous immunosuppressive agents. Her vision was 20/400 in this eye. (Courtesy of Sunir Garg, MD.) 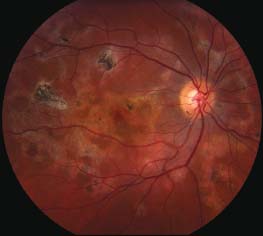 It occurs mainly in young, healthy young women in the second to fourth decades of life.

The etiology remains unknown, however an infectious etiology has been suspected, as one-third of patients have a viral prodrome.

An orange granularity of the fovea

No anterior segment inflammation, but some patients have a mild vitritis

Intermediate/late hypofluorescent spots scattered throughout the posterior pole and mid-periphery.

The lesions are more numerous on ICGA than seen clinically or on FA.

In the acute phase of the disease, there are small areas of hypoautofluorescence around the disk and posterior pole and hyperfluorescent areas corresponding to the white dots. These spots evolve over time and may persist or fade.

The lesions are more numerous than clinically seen.

OCT demonstrates defects located at the level of the outer retina and RPE. The areas corresponding to the white spots show interruption or signal attenuation of the photoreceptor inner segment/outer segment band.

Granularity of the macula

FA shows hyperfluorescence throughout the angiogram.

Observation as MEWDS spontaneously resolves over a period of several weeks to months with return of normal vision in nearly all patients.

Mild pigmentary changes may be seen after recovery, and some patients will have persistent visual field or color deficits. 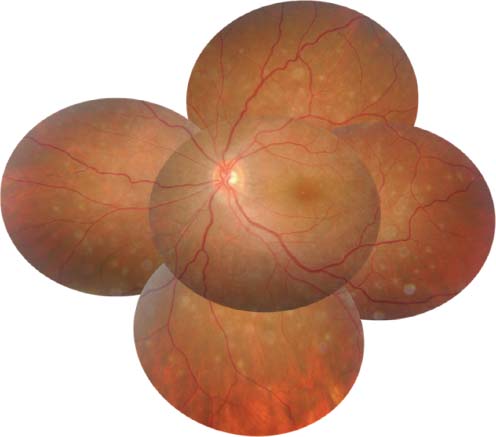 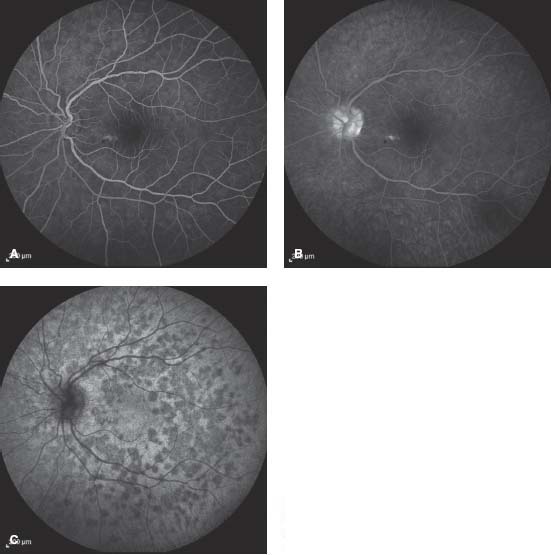 Multifocal choroiditis and panuveitis syndrome (MFCP) was described by Dreyer and Gass in 1984. It is a rare, idiopathic, inflammatory choroidal disease, mimicking presumed ocular histoplasmosis syndrome (OHS), which affects otherwise healthy young adults. MFCP, PIC, MEWDS and AIBES may constitute different clinical presentations of the same disease but this hypothesis has not been validated.

MFCP usually occurs in the third to fourth decades of life, and affects women more than men (approximately 3:1), and most patients have some degree of myopia.

The disease is bilateral in approximately 80% of cases, but it can be asymmetric or unilateral at presentation.

There are usually no other systemic findings.

There is no well-defined HLA-association. It may be virally induced.

Anterior chamber flare and cells are variable in intensity but are usually mild.

Vitreous haze is common and is useful to distinguish MFC from ocular histoplasmosis.

Multiple choroidal lesions (20 to 100) are randomly distributed throughout the posterior pole and mid-periphery. Active lesions have a “creamy” appearance, while older lesions appear atrophic and can become pigmented at their edges. The lesions appear to be at the level of the RPE and choroid.

The lesion size ranges from 50 to 350 μm in diameter. They can enlarge and become coalescent.

CNV is present in 30% of cases. CNV is characterized by the presence of subretinal fluid, subretinal hemorrhage and subretinal exudate.

Subretinal fibrosis may link the atrophic scars and is probably due to subclinical progression of the disease.

Ocular histoplasmosis: Unlike MFC, OHS does not have anterior uveitis or vitritis.

Punctate inner choroidopathy: Many feel that this is a variant of MFC. In PIC, the lesions tend to be deeper and more punched out, and these patients have less vitritis.

Birdshot retinochoroidopathy: These patients are usually HLA-A29 positive, are older, and have larger and less discrete lesions.

Staining of the optic disk and vessels

If a CNV is present, there is well-defined early hyperfluorescence with late leakage.

There are more lesions on ICGA than seen clinically.

Interestingly, there are often hundreds of smaller lesions (<125 μm) that are not clinically apparent.

OCT demonstrates nodular hyperreflectivity at the level of the photoreceptors and RPE.

ERG finding are often normal or mildly depressed and are nonspecific. Multifocal ERG can show diffuse depression in addition to focal areas of greater depression, which correspond to the scotomas on the visual field.

Periocular and intravitreal injections and sustained-release devices may be useful.

Given the chronic nature of MFC, consideration should be given to IMT, especially in cases of inflammation which cannot be controlled with low-dose steroids or for patients who are intolerant to corticosteroids.

Methotrexate, mycophenolate mofetil and azathioprine have been used with success.

IMT has been found to greatly reduce the risk of macular complications, including CME, ERM and CNV formation.

CNV: Corticosteroids and IMT may reduce recurrences by controlling the inflammatory state.

Extrafoveal CVNM can be treated with focal laser.

Juxta- and subfoveal CNVM have been treated with anti-VEGF agents, photodynamic therapy and intravitreal triamcinolone injection. Submacular surgery may still be useful in cases with vision worse than 20/100 that did not respond to other treatments.

Peripapillary CNV may be treated with focal laser for small lesions and anti-VEGF therapy.

Spontaneous resolution of the active neovascularization has been reported.

Seventy-five percent of patients develop permanent visual loss in at least one eye due to subfoveal lesions, CNVM, chronic CME or subretinal fibrosis.

Therapy with systemic corticosteroids and IMT has improved the prognosis:

Figure 8-11. A. MFC with multiple creamy lesions are typical of subacute MFC. The fluorescein angiograms show hypofluorescence in the early frames (B) and staining in the late frames (C). ICGA shows hypocyanescent lesions both early (D) and late (E). Often more lesions are present on ICGA than on color photographs or FA. F. The OCT shows hyperreflective lesions in the outer retina/RPE. There is subretinal fluid temporal to the fovea. 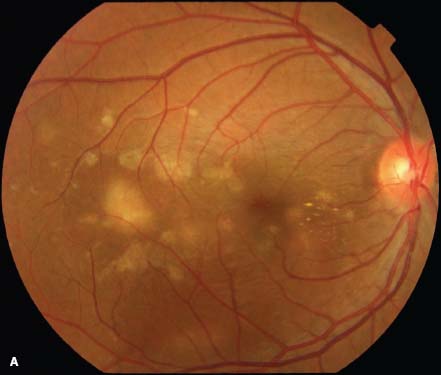 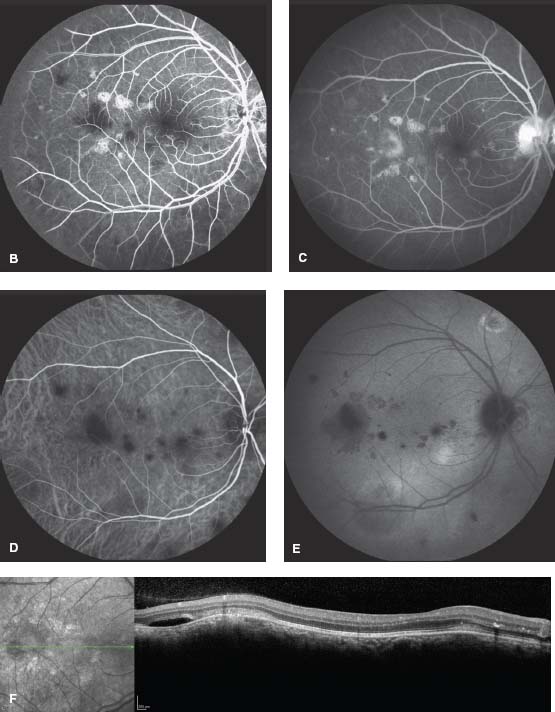