As of 2007, over one million people in the United States, and over 33 million people worldwide are infected with the HIV virus. Men make up 75% of affected patients, and men who have sex with men and racial minorities are disproportionally affected. The HIV virus itself can cause retinopathy. Many of the more serious ocular manifestations of AIDS are due to opportunistic infections.

On histopathology, loss of pericytes, narrowing of the capillary lumen, and thickening of the basement membrane are the earliest manifestations of the disease.

Patients are typically asymptomatic, but they may describe alterations of color vision, visual field changes, and reduced contrast sensitivity.

The prognosis is almost uniformly good.

No specific treatment is required, and it usually regresses with highly active antiretroviral therapy (HAART).

Figure 11-1. A few scattered cotton wool spots in a patient with HIV. 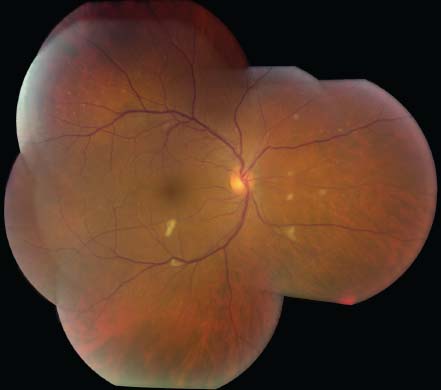 Cytomegalovirus (CMV) retinitis is the most common ocular opportunistic infection in AIDS, and is characterized by yellow-white retinal necrosis and perivascular inflammation.

The primary risk factor is the degree of immune compromise. Patients with a CD4 count below 50 cells/μL have more than a fourfold higher risk of developing CMV retinitis compared to patients with CD4 greater than 100 cells/μL.

CMV retinitis is the most common ocular opportunistic infection in patients with AIDS, and is itself an AIDS-defining illness.

In the pre-HAART era, it occurred in up to 40% of patients with AIDS and most patients died within 1 to 2 years after diagnosis. Fortunately, there has been a dramatic decrease in incidence in HAART era.

Rhegmatogenous retinal detachments (RRDs) are also an important cause of vision loss in patients with CMV retinitis, developing in approximately 20% of patients.

Perivascular inflammation with irregular patches of fluffy white retinitis and necrosis with associated scattered hemorrhages. It usually starts as a single lesion and then spreads outward as granular dots from that focus.

Patients often have a granular lesion with multiple dots around the edge (representing advancing lesions) with central clearing that leads to a stippled retinal pigment epithelium.

Progression typically occurs via expansion of previous retinal lesions, which can advance at a rate of up to 250 microns per week.

Vision loss occurs via macular or optic nerve involvement from primary retinitis or secondarily with macular edema associated with paramacular involvement or due to retinal detachment.

Acute retinal necrosis (ARN) starts as multiple lesions in the mid-peripheral that rapidly progress and is associated with substantial vitritis.

Fundus photos can be used to follow disease progression.

Fluorescein angiography (FA) demonstrates mottled hyperfluorescence of the expanding borders. There can be late staining of the retinal vessels near the area of infection.

AC tap or vitreous tap with polymerase chain reaction (PCR) may be considered.

Without HAART, 50% of patients experience CMV reactivation at maintenance dose of anti-CMV therapy.

The clinician must consider concurrent CMV disease in other organ systems.

Valgancyclovir (900 mg PO b.i.d.) is an orally administered prodrug of gancyclovir, which has an induction period of 2 weeks followed by maintenance (900 mg PO q.d.)

Intravitreal therapy can be useful as systemic therapy can cause bone marrow suppression (gancyclovir and valgancyclovir) and renal toxicity (foscarnet and cidofovir). However, intravitreal injections need to be performed frequently. If a patient needs long-term therapy and systemic treatment cannot be continued, a gancyclovir implant (see below) should be considered.

Fomivirsen (330 g intravitreal every week); withdrawn from the market

Gancyclovir implant (Vitrasert, Bausch and Lomb) is surgically placed in the pars plana and delivers gancyclovir for 6 to 8 months at + 4 concentration of IV injection.

May be a good option in patients with resistance and unilateral disease.

Retinal detachments in these cases are often complex with multiple retinal holes and often require vitrectomy with silicone oil tamponade.

Phenotypic and genotypic resistance can occur to gancyclovir, foscarnet, and cidofovir.

Gancyclovir resistance often secondary to mutations in the UL97 gene.

Rate of resistance has declined in HAART era (from 28% in pre-HAART to approximately 9% in HAART era).

Reports exist of gancyclovir-resistant CMV in serum with susceptible CMV in aqueous and vitreous samples.

Dependent on extent of retina involved, but has dramatically improved in HAART era.

Studies of Ocular Complications of AIDS Research Group, in collaboration with the AIDS Clinical Trials Group. Mortality in patients with the acquired immunodeficiency syndrome treated with either foscarnet or ganciclovir for cytomegalovirus retinitis. N Engl J Med. 1992;326(4):213–220. 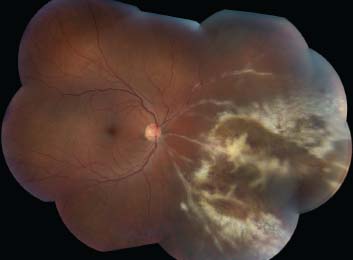 Figure 11-3. CMV retinitis in this case is limited to perimacular area with necrotizing retinitis along the inferior arcade, intraretinal hemorrhage, and granularity surrounding fovea. 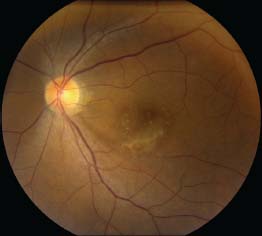 Figure 11-4. This patient with bilateral CMV retinitis confirmed with PCR has extensive white areas of retinitis in the mid-periphery with scattered hemorrhages in both eyes. 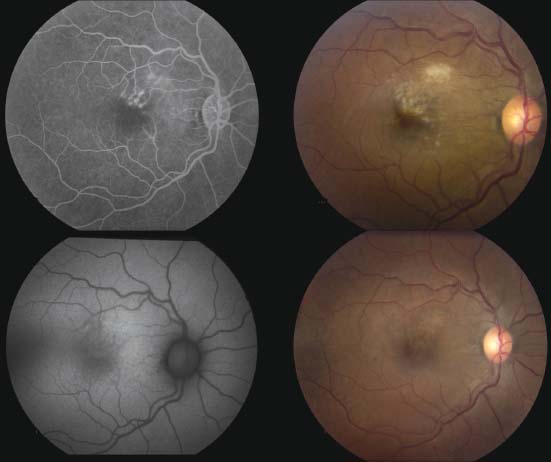 Figure 11-6. CMV retinitis with “brush-fire” appearance along the inferonasal quadrant in a patient with HIV. 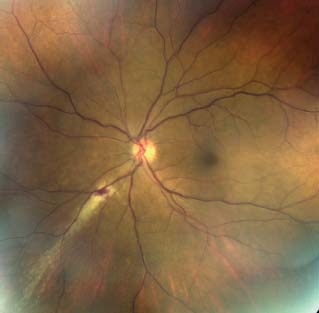