Anterior uveitis constitutes up to 75% of all cases of uveitis and human leucocyte antigen (HLA)-B27–associated uveitis is the most commonly diagnosed cause of acute anterior uveitis. This haplotype is frequently associated with systemic diseases such as ankylosing spondylitis, inflammatory bowel disease, reactive arthritis, psoriatic arthritis, and undifferentiated spondyloarthropathies. This group of diseases is also referred to as seronegative spondyloarthropathies (“seronegative” meaning negative rheumatoid factor, and “spondylo” meaning spine).

The lifetime cumulative incidence of acute anterior uveitis is 0.2% in the general population, but increases to 1% in the HLA-B27–positive population.

Depending upon the population studied, the HLA-B27 haplotype accounts for 40% to 70% of cases of acute anterior uveitis.

More than half of the patients with an HLA-B27–associated acute anterior uveitis present with an associated systemic disease.

HLA-B27–associated uveitis has been thought to be more common in males than in females, but recent work has called this into question.

The risk of developing spondyloarthritis or uveitis in a B27-positive patient is 25%.

In patients with spondyloarthropathy, the prevalence of uveitis is as high as 32.7%.

Most commonly, patients have acute and/or recurrent episodes of uveitis, usually lasting several days to weeks. However, it may be chronic in 25% of cases.

Rarely are both eyes simultaneously inflamed.

Severe anterior chamber reaction with fibrin can occur, and a hypopyon is common and is associated with disease severity (Figs. 4-1 and 4-2).

A fibrin net may form across the pupillary margin.

Posterior segment involvement is underrecognized, even though vitritis, vasculitis, papillitis, and macular edema may occur, especially in chronic, undertreated cases.

Ankylosing spondylitis is a chronic arthritis that mainly affects the spine and sacroiliac joints.

The major symptoms are lower back pain and stiffness.

Uveitis may be the first manifestation of the disease and may occur prior to onset of joint pain.

Nonsteroidal anti-inflammatory medications and physical therapy are the mainstays of treatment. Methotrexate and anti-TNF agents have also been successfully used.

The classic triad is papillary conjunctivitis, urethritis, and polyarthritis (“can’t see, can’t pee, can’t climb a tree”). However, these symptoms may be mild or absent.

Most of the patients are young male adults.

Bacteria such as Chlamydia, Salmonella, Yersinia, and Shigella have been associated with the disease, and may trigger the disease in a susceptible patient, however their role remains controversial.

Ulcerative colitis and Crohn’s disease are the main diagnostic entities.

The risk of developing uveitis is up to five times higher in patients with ulcerative colitis than those with Crohn’s disease.

Patients with IBD who develop uveitis may develop sacroiliitis and are HLA-B27 positive in 60% of cases.

Patients may also have erythema nodosum and pyoderma gangrenosum.

Behçet’s disease and Whipple’s disease are the main differential diagnoses to consider.

One-fifth of patients with psoriatic arthritis may develop sacroiliitis.

Nail changes include nail pitting, ridging, and discoloration can occur.

The rate of uveitis in patients with psoriatic arthritis is 25%.

Uveitis in this subgroup of patients has some specific characteristics such as bilaterality, chronicity, and severity.

There is an HLA-B27 positivity rate of 25%, and uveitis occurs somewhat less frequently in this group.

MRI of the sacroiliac joint and lumbar spine

Swab for chlamydia, Shigella, Yersinia, and other gram-negative bacteria.

Topical corticosteroids are the mainstay of treatment for ocular disease and usually need to be administered every hour for the first 48 hours, then slowly tapered.

If the uveitis is severe, subconjunctival injections of dexamethasone can be considered daily for 3 consecutive days. Sub-Tenon’s triamcinolone injection can also be used.

If there is no improvement on topical/periocular steroids, systemic corticosteroids and/or systemic immunosuppressive agents may be proposed.

Systemic NSAIDs may decrease the recurrence rate as well as exposure to cortico­steroids.

Anti-TNF-α treatment may be useful in treatment-resistant and/or sight-threatening cases.

Uveitis often recurs and may become chronic. Presence of chronic inflammation is the main prognostic factor.

Figure 4-1. A. Slit-lamp photograph shows severe acute anterior uveitis with fibrin in the anterior chamber and 360 degrees of posterior synechiae in a patient with reactive arthritis. B. Remission occurred with maximal topical corticosteroids, cycloplegic and subconjunctival injection of dexamethasone each day for 3 days.

Figure 4-2. Slit-lamp photograph showing acute anterior uveitis with fibrin in the anterior chamber and a hypopyon in a patient who is HLA-B27 positive with ankylosing spondylitis. 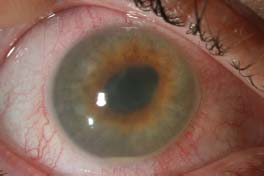 Figure 4-3. Right ankle arthritis in a patient with ankylosing spondylitis. 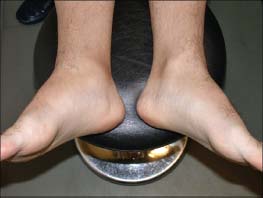 Figure 4-4. Sausage toes of the right foot in a case of seronegative spondyloarthritis. (Courtesy of P. Quartier.) 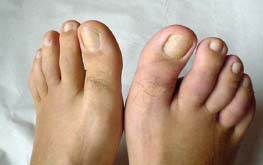 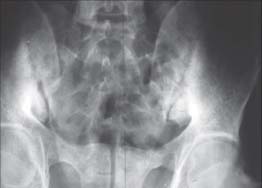 Figure 4-6. A. Lateral lumbar spine radiograph demonstrating a syndesmophyte. (Courtesy of P. Quartier.) B. This person has vertical syndesmophytes on multiple vertebrae causing a “bamboo spine.” (Courtesy of V. Vuillemin.) 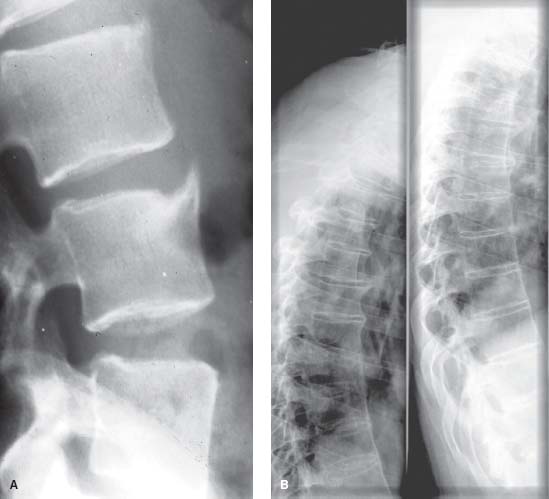 Figure 4-7. Plaque psoriasis on the elbow of a patient with HLA-B27–associated uveitis and psoriatic arthritis. 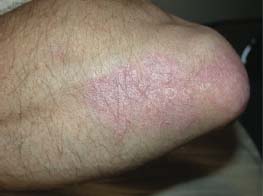 The Posner-Schlossman syndrome (PSS), also known as recurrent glaucomatocyclitic crisis syndrome, is an unusual clinical entity that occurs in young to middle-aged adults. Initially considered an immune-mediated condition, it may be due to a viral infection.

It predominantly occurs in young to middle-aged patients but it may also be diagnosed in the elderly.

There seems to be a clear male preponderance.

The disease remains rare but must be considered in all cases of unilateral uveitis associated with high intraocular pressure (IOP).

Since its initial description in 1948, there has been much speculation regarding its pathogenesis. Despite lack of evidence, developmental abnormalities of the angle, allergic factors, primary vascular abnormalities, sympathetic nervous system defects, and inflammatory mechanisms have all been proposed as possible mechanisms for this disorder.

Recent data based on specific intraocular antibody production and molecular biology suggest cytomegalovirus infection as the inciting agent in PSS.

Patients present with moderate blurred vision, often due to mild corneal edema secondary to an acute rise in IOP.

It is almost always unilateral with recurrent attacks in the same eye.

Posterior synechiae are not present.

The IOP is markedly elevated, ranging from 40 to 60 mm Hg.

The angle is open, although anterior synechiae may be present.

There is usually no iris heterochromia.

Vitritis is absent and there is no posterior segment involvement.

Between the attacks, the examination is unremarkable (with the exception of glaucomatous optic atrophy).

An anterior chamber tap may be performed for viral PCR and analysis of specific antibody production, confirming the presence of CMV.

Visual field testing and/or retinal nerve fiber layer analysis can be used to identify glaucomatous visual field abnormalities that may occur in severe or recurrent forms of the disease.

Ancillary tests to exclude other causes of unilateral uveitis and secondary glaucoma should be performed as clinically indicated.

Treatment to lower the IOP is usually required during attacks in order to protect the optic disc.

Before the identification of PSS as a viral disorder, many authors found the use of short-term topical corticosteroids useful.

In CMV-associated PSS, specific antiviral therapy with topical or systemic drugs may be initiated.

The duration of antiviral therapy depends on the clinical presentation and the severity of visual field alteration. In severe cases with high clinical suspicion, a 2- to 3-month regimen may be considered.

Cycloplegic agents are not required.

Filtering surgery is usually not recommended but may be successfully used to treat glaucoma that progresses despite maximum medical therapy.

However, in the absence of specific ocular antihypertensive medications or surgery, permanent visual loss may occur in approximately 25% of cases due to chronic ocular hypertension.

Figure 4-8. Typical white keratic precipitates that are most concentrated in the central cornea in a case of CMV-induced Posner-Schlossman syndrome. 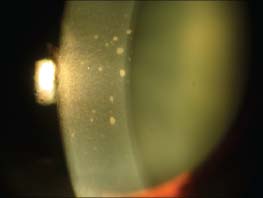