It is thought to be at least as effective as prednisolone acetate 1%, and some evidence suggests that it is approximately twice as effective.

Unlike prednisolone acetate, which is a suspension, difluprednate does not require shaking, and due to its higher potency, it may allow for a less frequent dosing regimen.

The drops should be dosed according to disease activity and can be used as frequently as every half hour while awake.

Brand name Pred-Forte is felt to be more effective than generic prednisolone acetate 1%.

The goal is to eliminate the anterior chamber cell activity whenever possible.

A common regimen is to taper by 1 drop per week, but tapering should not occur until the eye is inflammation free (if able to be achieved within a reasonable period of time).

The main side effects of topical steroids are an elevated intraocular pressure and cataract formation. This risk may be higher with difluprednate.

Patients should not use contact lenses while using topical steroid therapy.

Cycloplegics and mydriatics such as tropicamide, cyclopentolate, scopolamine, homatropine, and atropine dilate the pupil and can prevent the development of posterior synechiae and may ameliorate pain associated with ciliary body inflammation and spasm.

It can be used for all cases with significant anterior chamber inflammation or eye pain suggestive of ciliary body spasm.

Eyes with darker irides or higher levels of inflammation may require stronger/longer acting agents such as scopolamine, homatropine, or atropine, both to facilitate the dilation/constriction cycle and to relieve ciliary pain.

Some pupillary motility should be encouraged. If the pupil is immobile while dilated, posterior synechiae can still form.

These medications are anticholinergics; therefore they may induce dryness of the mouth, facial flushing, headache, and rarely vasomotor or cardiorespiratory disturbances. Patients at risk of such complications may be advised to perform nasolacrimal occlusion for 1 minute after drop instillation.

Triamcinolone acetonide is an injected long-acting steroid suspension, obtained under the brand names Kenalog or Kenalog-40.

Kenalog has been used for periocular injections in an off-label fashion for decades.

It is useful for all types of intraocular inflammation: Anterior, intermediate, posterior, and panuveitis, as well as uveitic macular edema.

The most feared complication is inadvertent ocular penetration.

Patients may develop ptosis, even after a single injection.

Septal atrophy with protuberance of the lower eyelid may also occur.

Figure 14-1. This patient developed a posterior subcapsular cataract due to both her uveitis and periocular steroid injections. (Courtesy of Julia Monsonego, CRA.) 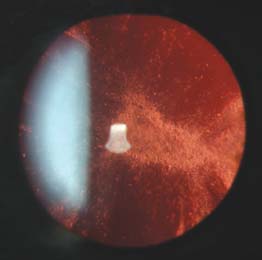 A triamcinolone injection may increase the risk of secondary infections and contact lens use should be discouraged.

Trivaris (Allergan) and Triesence (Alcon) are preservative-free and are FDA-labeled for intraocular use in uveitis and ocular inflammatory conditions.

Preservative-free triamcinolone can be obtained from some compounding pharmacies.

It can be used in cases of intermediate, posterior, and panuveitis, as well as in cases of uveitic cystoid macular edema, in cases in which systemic therapy is insufficient and/or contraindicated.

The traditional dose is 4 mg. However, a lower dose of 1 to 2 mg may be considered, particularly for uveitic macular edema. One mg may also be associated with a lower rate of side effects.

A paradoxical noninfectious inflammatory response to the drug (“sterile endophthalmitis”)

Ranibizumab (Lucentis) and bevacizumab (Avastin) are genetically engineered monoclonal antibodies that bind to and inhibit the biologic activity of human vascular endothelial growth factor (VEGF). Ranibizumab is FDA approved for intraocular injection to treat wet macular degeneration and macular edema associated with retinal vein occlusion. Bevacizumab is FDA approved for IV use for various forms of cancer; the intraocular use of bevacizumab is off label, but its use is well established both in the ophthalmic literature and in clinical practice.

Anti-VEGF therapy may be used in conjunction with steroid therapy (usually sub-Tenon’s or intravitreal triamcinolone) for inflammatory choroidal neovascularization associated with white dot syndromes, sarcoidosis, and other forms of uveitis. It is also useful for peripheral retinal and anterior segment neovascularization.

The typical dosing is a 0.05-mL injection of either ranibizumab 0.5 mg or bevacizumab 1.25 mg.

The standard potential complications of an intravitreal injection apply.

Rarely, anywhere from days to weeks after an injection, patients may develop a mild inflammatory response with anterior chamber and vitreous cells but without significant vitreous haze.

The fluocinolone acetonide intravitreal implant is a long-acting implant marketed under the name Retisert. It is inserted through a pars plana incision performed in the operating room (Fig 14-2).

The FDA label states that the fluocinolone implant is indicated for the treatment of chronic noninfectious uveitis affecting the posterior segment of the eye. In terms of the SUN classification, the implant can be used to treat significant intermediate, posterior, or panuveitis. 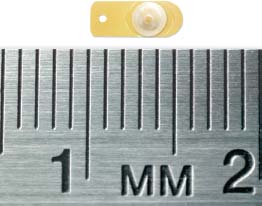