Eye injuries are an important world-wide cause of visual loss, particularly in developing countries. Surveys indicate that there are almost 2.5 million new eye injuries in the United States each year. Of these, between 40 000 and 60 000 patients are diagnosed with trauma-related blindness.1,2 Ocular trauma is the leading cause of monocular blindness2 and the affected population tends to be young, with 58% under 30 years of age.2 Given the potential societal burden, the importance of preventing eye injuries is a point of emphasis in both developed and developing nations.

As noted above, most victims of ocular trauma are in the 18–44 age range.1,2 Most eye injuries to children occur during athletic or recreational activities.3,4 In adults, car accidents, work-related injuries and physical assaults are the most commonly reported causes.5,6 The vast majority of individuals suffering traumatic chorioretinopathies are male (72–90%).2,6 Blunt injuries account for 51–66% of ocular injuries in both prospective and retrospective studies,5 with the majority of retinal lesions being unilateral.1 Previous studies have implicated metal, explosives, and stone as the most common materials contributing to ocular morbidity and blindness in the setting of trauma.6,7

The chorioretinopathies described in this chapter are those due to direct or indirect injury to the eye by blunt forces, without scleral rupture. Penetrating injuries are discussed in other chapters (Chapter 110, Surgery for ocular trauma).

The blunt force acting on the eye can cause a coup injury at the site of impact, and a contrecoup injury in the opposite part of the eye as a result of shock waves acting at the interface of tissues of different densities. Direct blunt trauma also compresses the eye in the axis of the force and significantly stretches the tissues in the perpendicular plane. This stretching effect may also contribute to indirect injury.8

The term commotio retinae was first introduced by Berlin9 in 1873. It is sometimes referred to as Berlin’s edema, as Berlin believed that the whitish appearance of the retina was due to extracellular edema. Commotio retinae is a self-limited opacification of the retina secondary to direct blunt ocular trauma, characterized by a transient whitening at the level of the deep sensory retina (Fig. 91.1). Retinal whitening may take hours to develop before it becomes visible ophthalmoscopically.10 The lesion may involve both the central retina and the periphery.10 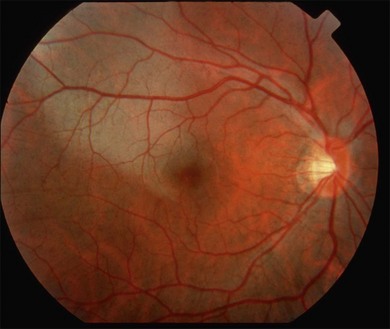 Commotio retinae is a common finding after blunt eye trauma and accounts for 9.4% of all post-traumatic fundus changes.10 Not surprisingly, the vision is more affected when the fovea is involved. No treatment is available or recommended for commotio retinae, other than observation.10,12

Retinal concussion is a milder condition of traumatic retinal opacification. The initial vision is better (usually better than 20/200) and the gray–white change is less dramatic. In addition, the clinical changes are reversible, with vision generally recovering fully with minimal sequelae.11 On fluorescein angiography (FA) the areas of opaque retina block background choroidal fluorescence. Leakage from the retinal vessels is not observed although mild staining is often noted at the level of the RPE, which generally clears within 24 hours.10,13 The retinal whitening on ophthalmoscopy also clears spontaneously in a few days.10,17

In retinal contusion, the retinal whitening is more intense and may be associated with hemorrhages and more persistent visual loss. Visual acuity may be variably affected, from mild to severe, in a fashion that does not correlate with the degree of retinal whitening seen clinically. If the macula is affected, acuity is usually permanently damaged.21

In contrast to retinal concussion, more intense staining or leakage is noted at the level of the RPE on FA.21 Acute pigment epithelial damage leads to permanent pigmented scars in the ensuing weeks.

Choroidal rupture is a tear of the inner choroid and overlying Bruch’s membrane and RPE caused by mechanical disruption when the globe is acutely deformed by blunt trauma causing anterior posterior compression, and subsequent horizontal expansion of the eye.10,22 Choroidal ruptures are noted to be present in approximately 5–10% of blunt ocular trauma cases.23 During the blunt trauma, the fortified collagenous sclera and the naturally flexible retina are less likely to rupture. However, the relatively inelastic RPE, Bruch’s membrane, and choriocapillaris, do rupture.10,22 Direct choroidal ruptures are relatively uncommon; they tend to be parallel to the ora serrata and are found at the direct site of impact, which is usually anterior to the equator.10 Indirect choroidal ruptures resulting from compressive injury to the posterior pole of the eye22 are more common (about 80%),22,24 with the crescent-shaped tears occurring concentric to the disc because of the tethering or stabilizing effect of the optic nerve.25 The majority of indirect ruptures occur temporal to the disc and involve the fovea. Many are isolated, but there can be multiple ruptures (Fig. 91.2).24 Patients with underlying compromise or brittleness of Bruch’s membrane, as can be seen in the setting of angioid streaks, are more susceptible to indirect rupture than the normal population.24 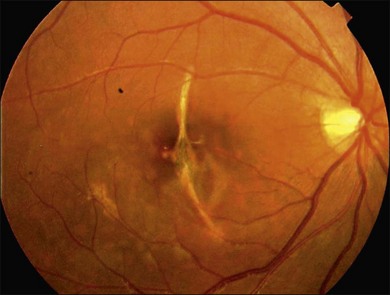 Choroidal rupture is often associated with intrachoroidal, subretinal, and intraretinal hemorrhage. The associated hemorrhage and accompanying commotio retinae may conceal the presence of the rupture, which may become visible only after the blood clears in 2–3 months.25 Occasionally they may not be readily evident ophthalmoscopically, and their presence is confirmed after FA or indocyanine green angiography (ICGA). ICGA appears to have an advantage in diagnosis of choroidal rupture as it often highlights broader areas of pathology and disturbance compared to FA.25 Choroidal ruptures appear as hypofluorescent streaks on ICGA.

In histopathologic studies, Aguilar and Green22 showed that choroidal rupture is followed by bleeding, fibrovascular tissue proliferation, and RPE hyperplasia. The overlying retina is variably affected, ranging from loss of the outer layers alone to discontinuity affecting the full retinal thickness. Areas of choroidal rupture are noted to heal with a fibroglial response. 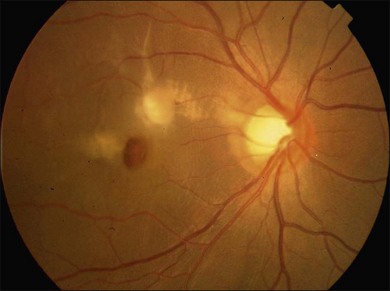 Fig. 91.3 Traumatic macular hole in a 15-year-old boy 4 weeks after being hit by a book during school.

The exact cause of TMH remains controversial. Ho and associates32 outlined four basic historical theories regarding its cause: the traumatic theory, the cystic degeneration theory, the vascular theory, and the vitreous theory. Today, it is recognized that the pathogenesis of macular hole formation is a combination of factors, while vitreous traction may play an important role in some cases of TMH formation.33,34

Macular holes do not always form immediately after trauma, but may appear after several days. In some cases macular edema and cysts develop, and eventually the roof of the cysts erode leading to the formation of a macular hole.30 OCT can help to identify alterations that occur before hole formation and may help to explain the pathogenesis of TMH.35,36

There is no consensus on surgical management for this disease, because some cases demonstrate spontaneous closure of the macular hole and improved visual acuity by 6 months after injury.31,37 Cases that close spontaneously tend to be in younger patients and in patients with smaller holes (less than 1/3 disc diameter) and without a fluid cuff.35 Yamada and associates31 proposed that for young patients with small traumatic macular hole without a fluid cuff, it is probably better to wait at least 6 months from their ocular concussion to allow spontaneous hole closure. Mechanisms of spontaneous TMH closure may include glial cells or RPE cells that proliferate at the margin of the hole and may fill and close the defect.31

Goldzieher introduced the term chorioretinitis plastic sclopetaria, or the shorter form chorioretinitis sclopetaria, in 1901,38 but now the term traumatic chorioretinal rupture (TCR) is deemed to be more acceptable. It refers to a simultaneous break in the retina and choroid resulting from a high-velocity missile passing adjacent to and coming into contact with the globe, entering the orbit without causing a scleral rupture. This injury causes a full-thickness chorioretinal defect and visual loss.39 Simultaneous retraction of the choroid and retina at the site of the break reveals bare sclera. Two mechanisms have been considered: damage adjacent to the pathway of the high-velocity object is responsible for the direct injury, and the indirect injury is caused by the shock waves transmitted to the globe.39

TCR is a rare clinical presentation. Fundus examination may show the chorioretinal defect, bare sclera, pigment proliferation, marked fibrovascular proliferation and scar formation.40 If the foreign body has come to rest deep in the orbit, the TCR is typically oriented radially.41 The visual prognosis depends on the extent and location of intraocular injury. Secondary chorioretinal arterial and venous anastomoses have been reported.42 ICG dye permits visualization of the deeper choroidal vessels and may demonstrate ruptures that are difficult to appreciate clinically.43

Despite severe retinal and choroidal injuries in TCR, the patients have a low chance of retinal detachment, as marked proliferation of fibrous tissue causes firm adherence of retina and choroid to the sclera.40 In addition, the intact posterior hyaloid that is typically present in young patients further mitigates the risk for retinal detachment.41

Management includes observation, and rarely requires surgical intervention to repair a retinal detachment or to remove a non-clearing vitreous hemorrhage.21,41 While confronted with TCR, it is important to make an accurate diagnosis to prevent unwarranted surgical intervention.40

TCR is typically caused by gun injuries resulting in retained intraorbital metallic foreign bodies, which are well tolerated and typically have minimal adverse effect on visual prognosis, and as such can be followed up without surgical intervention.40

RPE tear is a well-known complication of age-related macular degeneration.44 But it is also a rare complication after trauma.45,46 Why? It is thought that the force applied must fit into an extremely narrow window.46 The force must be sufficiently large so as to cause an RPE tear, but not so large as to cause both the RPE and Bruch’s membrane to tear, as in a choroidal rupture. As the elastic torn edge of RPE tends to retract over the adjacent intact RPE, RPE tears are usually prevented from healing, and visual recovery is generally poor.46

Biomicroscopy typically demonstrates a hypopigmented area corresponding to RPE loss and exposed Bruch’s membrane. A scroll of pigmented RPE is usually noted at the margin of the hypopigmented area.45 FA demonstrates a window defect in the area of RPE loss with an adjacent area of blocked fluorescence due to the rolled-up RPE (usually with a sharp edge between these regions).45 OCT is particularly useful in displaying these changes at the level of the RPE.45 Patients with traumatic RPE tears involving the fovea usually have a poor visual prognosis.44

Fok et al.46 reported spontaneous resolution of traumatic RPE tears in a patient who subsequently had good visual recovery. The mechanisms of resolution in this case included a layer of hypopigmented RPE cells, atrophy of the choriocapillaris, and/or deposition of fibrous tissue.