A range of clinical symptoms caused by prolonged oversecretion of PTH and hypercalcaemia vary from inconspicuous (fatigue) to painful (renal colic) and dangerous (hypercalcaemic crisis). Hypercalciuria can lead to kidney stones, nephrocalcinosis, renal impairment and nephrogenic diabetes insipidus. Prolonged reabsorption of calcium from the bones causes osteopenia, osteoporosis and in severe cases bone deformity known as osteitis fibrosa cystica. Weakened bones can cause bone pain and increase risks of fractures of long bones and collapse of vertebrae. Persistently elevated calcium levels can cause abdominal pain, frequently nonspecific but sometimes associated with peptic ulcer or pancreatitis. Other presentations include neuropsychiatric disorders, muscle weakness and pain, depression and fatigue. Very high, untreated calcium levels can cause hypercalcaemic crisis and present as thirst, nausea and vomiting and lead to dehydration, confusion, coma, ventricular arrhythmias and death [3–5].
In the past, most patients presented with severe complications, but introduction of automated multichannel analysers in the 1970s dramatically increased the number of patients diagnosed with high calcium. Nowadays diagnosis of PHPT is made earlier. Approximately, 80–85 % of patients are diagnosed with biochemical abnormalities before they develop any symptoms.

Biochemical tests: The diagnosis of PHPT is established by measuring serum calcium and PTH, which shows hypercalcaemia and inappropriately high PTH levels. Routine biochemical assessment of patients with PHPT should include renal function tests and vitamin D3 levels. In asymptomatic patients presenting with a mild hypercalcaemia, marginally elevated PTH and hypocalciuria, the diagnosis of FHH should be excluded by measuring the calcium-to-creatinine ratio (low in FHH). Genetic testing for mutations of the CaSR could be used in ambiguous cases. This is important, as FHH is a benign disease with no end organ damage and does not need treatment. Bone density scan and ultrasound of the kidneys should be considered.
Genetic mutations causing HPT are rare in adults but frequent in children. Positive genetic test is helpful in establishing diagnosis of familial HPT, planning treatment and initiating biochemical and genetic screening of other members of the family. In patients with positive family history, testing for mutations should start with the menin gene [6] followed by parafibromin (HRPT2) gene [7–9] if the gland is an atypical adenoma or carcinoma. RET mutation analysis is recommended for patients with features consistent with MEN2a [10]. Alternative to sequential genetic screening described above is to perform an analysis of all genetic mutations associated with hyperparathyroidism at once. Currently available panel of genetic tests include MEN1 and MEN2, CaSR, CDC73, CDKN 1A, CDKN 1B, CDKN 2B and CDKN 2C and is cheaper than performing these tests separately.
Imaging of abnormal parathyroid glands is a critical part of the preoperative workup especially in patients with sporadic PHPT. Its role is to identify the position of enlarged gland in the neck or mediastinum and differentiate between single and multiple gland diseases. Identification of a single enlarged gland by using two different imaging techniques (concordant findings) enables the surgeon to plan a minimally invasive approach. Imaging is less helpful in familial and renal HPT when neck exploration and removal of multiple glands are usually required. In these situations embarking on surgery without localization studies is acceptable [11].
Ultrasound (US) scanning of the neck is usually performed using a high-frequency (12–15 MHz) transducer, which enables the detection of enlarged parathyroid glands, description of their size and position in relation to thyroid and other anatomical structures. Adenomas typically appear as homogenously echoic nodules on gray scale (Fig. 12.1) and are highly vascular on colour Doppler imaging.

Ultrasound image clearly demonstrating an enlarged parathyroid gland
Limitations of US include difficulty in identifying adenomas, which are either deep-seated (retrosternal/mediastinal) or related to air-filled structures such as the trachea and oesophagus. In addition, US is an operator-dependent investigation, and therefore outcomes will tend to relate to the level of experience of the centre and individual radiologist.
Nuclear imaging is usually performed with ([99mTc] methoxyisobutylnitrile (MIBI)), which avidly localises in mitochondria present in large numbers in the oxyphil cells of parathyroid tissue. Parathyroid adenomas and to a lesser degree hyperplastic glands demonstrate higher tracer uptake in the early stage and delayed washout in the late image as compared to the surrounding thyroid tissue. The use of SPECT, which produces 3D images from two cameras, has been shown to improve its sensitivity [12] (Fig. 12.2). Nuclear imaging is better than ultrasound at detecting ectopic adenomas. However, in the presence of thyroid nodules, differentiation of the abnormal parathyroid and thyroid tissue can be difficult. A systematic review of 54 studies identified the sensitivity of ultrasound to be 78 % in detecting solitary adenomas, 35 % in hyperplasia and 16 % in double adenomas. The sensitivity of MIBI was 88 % in detecting solitary adenomas, 44 % in detecting hyperplastic glands and 30 % in detecting double adenomas [13]. 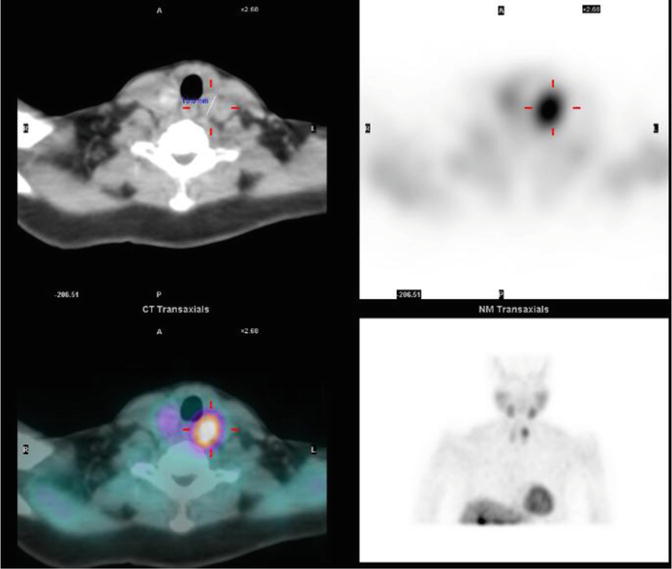 CT/MIBI image of enlarged parathyroid in left upper position
Computed tomography (CT), magnetic resonance imaging (MRI) and venous sampling are rarely required in modern practice and should be reserved for cases where standard investigations are negative or in recurrent HPT requiring reoperation. Axial, thin cuts and contrast-enhanced CT images from the base of the skull through the mediastinum can help to identify abnormal parathyroids in the neck not seen on other scans and ectopic glands in the mediastinum. MRI is limited by similar appearances of cervical lymph nodes and parathyroid adenomas and venous sampling is an invasive test, which is now almost completely obsolete [14].

12.7.1 When to Operate and What Benefits to Expect

Causal links between hyperparathyroidism and its harmful effects are well established in large populations, but asserting whether there is such a link in each individual case could be difficult. There is general consensus that symptomatic patients presenting with end organ damage such as renal stones, severe osteoporosis or pancreatitis should be offered surgery, both on account of seriousness of presentation and consequences of not treating it. The decision to operate is more complex when faced with uncertainty whether subtler symptoms such as fatigue or depression are caused by PHPT or in 80 % of patients who declare no symptoms at all.
When deciding whether to operate, the surgeon should take into account existing Guidelines, evidence from Observational Studies and Randomized Controlled Trials (RCTs). Regularly updated NIH Guidelines advise surgery in asymptomatic patients younger than 50 years, when calcium level is >0.25 mmol/l above upper limits of normal, creatinine clearance GFR reduced to <60 ml/min or bone mineral density T score ≤ −2.5 at any site. Evidence from Observational Studies suggests that even subtle abnormalities of calcium and PTH levels are associated with adverse health outcomes. Between 1/4 and 1/3 of patients with asymptomatic PHPT left untreated for 10–15 years develop progressive disease with worsening hypercalcaemia, hypercalciuria and reduced bone density. Patients younger than 50 years have increased risk of disease progression. Patients who had parathyroidectomy had significant improvement in BMD at hip and lumbar spine but not forearm. Patients with untreated PHPT have increased mortality predominantly from CVD, but in patients who had surgery, there was a decline in mortality. Another study of patients with PHPT showed increased standardised morbidity and mortality for coronary and cerebrovascular diseases and cancer such as colon, kidney and breast. Dyslipidaemia and diabetes are more prevalent in patients with PHPT.
Evidence from RCTs informs us that surgery reduces formation of renal stones, improves BDM and reduces fractures. Although parathyroidectomy improves dyslipidaemia, no overall improvement in cardiovascular events or decreased mortality has been observed. Impact of surgery on quality of life and neuropsychological outcomes is uncertain, as results of studies are contradictory.

The aims of surgery in patients with PHPT are immediate and permanent cure of abnormally high levels of calcium and PTH, alleviation of the symptoms and prevention or reversal of end organ damage. The choice of operating technique, which includes bilateral neck exploration (BNE) or minimally invasive parathyroidectomy (MIP), depends on the underlying parathyroid pathology and imaging results indicating the number and location of glands to be removed. In patients who need removal of 1–3 abnormal glands, normalisation of calcium and PTH levels without postoperative supplementation is the goal. When all four glands are abnormal and have to be removed, the goal is normocalcaemia maintained either by calcium and vitamin D3 supplementation or autotransplantation of parathyroid tissue.

Bilateral neck exploration (BNE) with visualisation of all four parathyroid glands, irrespective of the underlying parathyroid pathology, has been the gold standard surgical treatment for many past decades [15]. It is an effective and safe procedure, able to cure 95 % of patients with sporadic and 80–90 % of patients with familial PHPT. Typically, BNE is performed through a collar incision with exposure and dissection of all the parathyroid glands prior to deciding which glands should be removed. It allows not only direct visualisation of four glands but also enables exploration of sites of potential ectopic glands. Decisions regarding which glands are abnormal and need removing are based on prior knowledge of preoperative imaging and the size of the glands observed during surgery. BNE remains the operation of choice in three distinct scenarios: first, in familial PHPT when multiple glands are expected to be abnormal; second, when all imaging is negative; and third, when MIP fails to identify the enlarged gland and thereby conversion to BNE is necessary. Complication rate after parathyroidectomy is not well quantified but expected to be below 4 % with bleeding and infection accounting for 1 % and transient or permanent laryngeal nerve injury for 2–3 %.
In patients with familial HPT, extent of parathyroidectomy depends on underlying pathology. In MEN1, four-gland parathyroidectomy is often recommended as subtotal (less than four glands) parathyroidectomy is associated with high rates of recurrence requiring further surgery. Sometimes the decision is taken to remove 3 or 3½ parathyroids achieving immediate cure and accepting high risk of recurrence. In MEN2a, where frequently single gland is involved, removal of 1–3 glands can be curative without the risk of permanent hypocalcaemia. As the risk of PHPT in MEN2a is relatively low (10 %), parathyroids removed incidentally during prophylactic thyroidectomy should be reimplanted into the muscle. HPT-JT syndrome has a 15 % risk of parathyroid carcinoma, and surgical options include the removal of the single abnormal gland with subsequent annual surveillance of calcium and parathyroid hormone levels [15] or prophylactic total parathyroidectomy to prevent future malignancy or recurrent HPT. FIHPT is a complex disease associated with mutations in different genes including CaSR, MEN1 and HRPT2. The current recommendation is to remove 1–4 abnormal glands using intraoperative PTH and consider autotransplantation. In neonates with NSHPT, four-gland parathyroidectomy is essential to achieve cure, and in our experience removal of less than four glands results in persistently high levels of calcium and PTH.
< div class='tao-gold-member'>
Only gold members can continue reading. Log In or Register to continue