Minimally Invasive Surgery in the Head and Neck

Miccoli et al. [24] presented a retraction system using conventional surgical retractors, which were used to retract the skin and the strap muscles in order to expose the thyroid gland (Fig. 15.2).

(a) Retraction system using conventional surgical retractors (Miccoli et al.). Retractors (A, B, and C) were used to retract the skin and strap muscles to expose the thyroid gland (T). (b) One retractor (A) is also used as a “wall lifter,” to allow insertion of a 5-mm 30° laparoscope (O) and of 2-mm-diameter laparoscopic and conventional instruments (I) through the skin incision [24]

The CO2 insufflation method creates operating space by insufflating a closed area with CO2. This may cause complications such as severe subcutaneous emphysema, supraventricular tachycardia, and air embolism in case of accidental injury of one of the great vessels [25]. Rubino et al. [26] in their experimental study on pigs observed severe increase in the intracranial pressure with insufflation pressure greater than 15 mmHg, possibly owing to decreased cervical venous flow. These CO2 insufflation-related problems have been reported to be alleviated by lowering the CO2 pressure to 4–6 mmHg [27]. In some procedures, surgeons use short insufflation just to dissect the thyroid space in early phase of the procedure, relying later on, on external retraction only [28]. Ochia et al. [27] performed a detailed study on the safety of this method and used indirect calorimetry to estimate the intraoperative CO2 absorption from the surgical field, with optimal CO2 pressure adjusted to 6 mmHg. Hypercarbia was then eliminated.

Endoscopic operations have several benefits, including reduced tissue damage, improved cosmesis, and fewer wound-related complications. However, such operations are not yet a standard procedure in the head and neck region [29]. Endoscopic surgery has a smaller wound size and enables the positions of the wounds to be moved to places of cosmetic benefit. This technique may also reduce the amount of bleeding and postoperative pain. In thyroid surgery, it obviates the need for a neck scar. An overzealous pursuit of these objectives must not, however, allow the intrinsic surgical treatment to be compromised [30].
Conventional operative scars in the anterior region of the neck are nearly always exposed and therefore visible to others. Minimally invasive surgery places an emphasis on cosmetic benefits. This criterion was satisfied in a report by Park [31] in which a direct approach was made to the thyroid through a succession of neck wounds without a skin flap [30].
The potential advantages of minimally invasive video-assisted thyroidectomy (MIVAT) are better recognition of the anatomic entities during dissection, improved hemostasis, less postoperative pain, reduction of complications, and higher cosmetic satisfaction [32].
Minimal access surgery has, in the past three decades, evolved to be the standard of treatment in various types of operations such as laparoscopic cholecystectomy. It has the merit of less pain, therefore hastening recovery. Being applied in the head and neck region, minimally invasive parathyroidectomy [33–37] and minimally invasive thyroidectomy [38, 39] have the additional benefit of preservation of functions and improved aesthetic outcome. Actually, minimally invasive parathyroidectomy has become the new standard over conventional bilateral neck exploration [40].

The delay of development of endoscopic neck surgery has been attributed to the relatively narrow field with many vital structures in it and to the lack of a naturally occurring cavity to perform the surgery in contrast to the abdominal, pelvic, and chest cavities. Neck surgery requires fine technique to prevent injuries to important surrounding structures. For endoscopic neck surgery to be feasible, two important points need to be addressed: first, how to create a comfortable working space and second, how to avoid bleeding so that a bloodless and clear operating field can be achieved and maintained [41].
A number of significant obstacles had to be overcome before the performance of endoscopic neck surgery. Although several investigators have described their experience with endoscopic surgery of the thyroid compartment, endoscopic surgery in the other cervical compartments has proven to be more challenging [42]. Carreno et al. [43], in 1999, encountered a series of pitfalls in an experimental model and published an honest report of their unfavorable experience with endoscopic neck surgery. Among the major difficulties were the small size of the potential space and the high pressure required to create this space by pneumatic dissection of fascia layers. The high pressures led to serious complications including air embolism, pneumothorax, and pneumomediastinum [43].

The procedure comprises excision of a neck swelling and/or fistula via a video-assisted approach. It is performed under general anesthesia with the patient in the supine position without hyperextension of the neck, but with slight rotation to the opposite side as during conventional lymphadenectomy.

The primary surgeon stands on the same side of the swelling. The second and third assistants stand on the opposite side (Fig. 15.3). 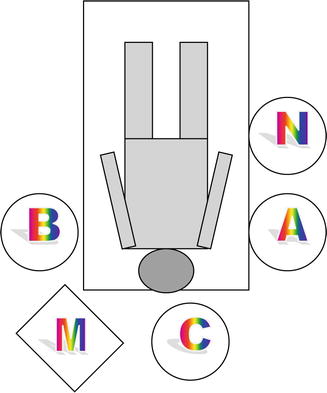 Position of the surgical team in video-assisted neck surgery (VANS) for excision of a right-sided neck swelling through a transcervical skin incision, A main surgeon, B first assistant, C second assistant, N operating room nurse, M video monitor
Two accesses are used. The first main access is a 1.5-cm central transverse incision situated two fingers above the sternal notch. Through this incision, under direct vision, the fascia on the medial border of the sternocleidomastoid (SCM) muscle is incised, and by blunt dissection, the SCM muscle and strap muscles are progressively separated. Two small retractors are used in this preliminary step to gain the superficial operative space. When the jugular vein and carotid artery come into direct vision, the small retractors are replaced by larger and deeper retractors, which allow maintenance of the operative space for the remainder of the procedure via pulling of the vascular trunk medially and the SCM muscle laterally (Fig. 15.4). 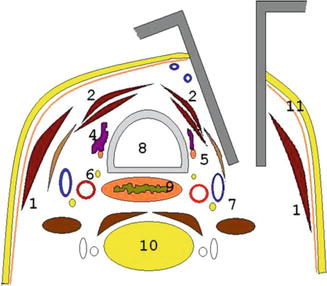 Retractors allow maintenance of the operative space during the entire procedure. By means of these retractors, the SCM muscle is pulled laterally while the strap muscles and vascular trunk are pushed medially. (1) SCM muscle, (2) strap muscles, (3) anterior jugular vein, (4) thyroid bed after thyroidectomy, (5) parathyroid gland, (6) inferior laryngeal nerve, (7) neurovascular trunk (internal jugular vein, carotid artery, vagus nerve), (8) trachea, (9) esophagus, (10) vertebra, (11) platysma
The second access is a 5–7-mm incision along the posterior border of the SCM muscle at the median level. All instruments except the endoscope are introduced through the main access, whereas the camera is inserted into the operative space through the second access. At this point, the lateral 5-mm trocar is introduced under direct vision of the endoscope and temporarily held through the main central incision.
The swelling is then grasped by a suitable instrument according to its nature and mobilized all around maintaining a bloodless field by diathermy or harmonic scalpel. After removal of the specimen, the lateral trocar is extracted. No drain is necessary, and wounds are closed by absorbable stitches. 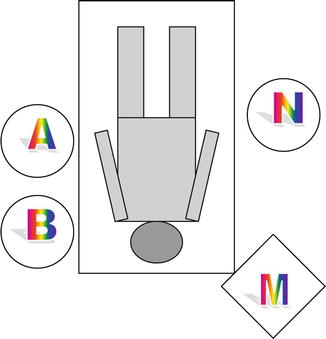 The position of surgical team in VANS through infraclavicular skin incision for a patient with a left neck swelling. A the main surgeon, B the assistant surgeon, N the operating room nurse, M the video monitor
An oblique main incision is made for insertion of the harmonic scalpel and grasper, approximately 3 cm below the clavicle, on the chest wall on the ipsilateral side of the swelling. Through the main incision a wide dissection of the sub-platysmal plane using long protected tip diathermy is carried out. Two pieces of Kirschner wire are inserted horizontally in the subcutaneous (SC) layer of the anterior part of the neck. These two Kirschner wires are lifted up by the mean of two handles connected and fixed to an L-shaped bar to create a tent-like working space (Fig. 15.6). Moreover, two sutures are inserted, one to the upper edge of the main wound and the second to the skin between the two Kirschner wires, and then pulled up to the L-shaped bar to obtain a wider working space. Another anterior neck skin incision of 5 mm length is then made on the ipsilateral side of the swelling, opposite to the medial border of SCM muscle, for the insertion of a 5-mm telescope through a small-sized trocar to facilitate handling of the telescope by the assistant.

The gasless lifting system for VANS consisting of two Kirschner wires, lifting handles, L-shape bar, two skin sutures with protection of skin edges
One of the great benefits of using the video-assisted technique is that magnification helps avoidance of injury of important structures. Figure 15.7 demonstrates the medial aspect of the wall of a branchial cyst and its deep relations that are usually invisible during conventional surgery, while Fig. 15.8 shows how easily the hypoglossal nerve and the glossopharyngeal nerve could be identified. 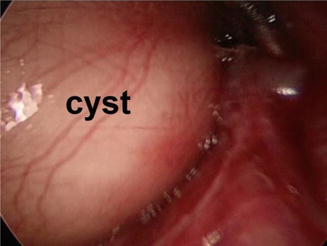 Deep relations of a branchial cyst

The hypoglossal and glossopharyngeal nerves could be easily identified with the video-assisted technique
Another benefit is good illumination especially in deep spaces, a benefit that is very useful in identification of fistulous tracts. Figure 15.9 shows the medial end of a branchial fistula.

Traditional open surgery for lateral neck dissection in patients with head and neck cancers requires a large incision to obtain adequate exposure of the surgical field, leaving an unsightly scar. Over the last decade, surgeons have witnessed dramatic changes in surgical practice as a result of technological advancement.
Several endoscopic modified radical neck dissections (MRND) have been conducted since the introduction of the endoscopic technique to thyroid surgery, attempting at minimizing the extent of dissection, improving cosmesis, reducing postoperative pain, shortening hospital stay, and enhancing postoperative recovery.
Many approaches have been used, mainly in thyroidectomy and neck dissection, either cervical or extra-cervical; the former is applied through the lateral cervical, retroauricular, and submandibular incisions, while the extra-cervical approach is applied through the axillary, infraclavicular, and breast incisions.
The application and feasibility of the endoscopic approach was given a further boost with the availability of various robotic systems such as the da Vinci system. The use of a robot was not tempting at the beginning because of its relatively high cost, bulkiness of the robotic arm, and long operating time. However, since the recent publication demonstrating the feasibility and safety of robotic-assisted thyroidectomy in differentiated thyroid carcinoma, an increasing number of specialized surgical centers worldwide began to accept and perform this procedure. The theoretical advantages of using the robot over the endoscopic approach include the three-dimensional view offered to the operating surgeon, the flexible robotic instruments with seven degrees of freedom and 90° articulation, the increased tactile sensation, and the ability to filter any hand tremors [44].
In a recently published study by Yan and collogues [45], a cervical “scarless endoscopic thyroidectomy” (SET) with ipsilateral levels II, III, and IV dissection via breast approach for papillary thyroid carcinoma (PTC) was performed for 12 female patients. They reported that level II dissection by SET was a feasible and safe procedure, with reasonable costs and satisfactory cosmetic results.
Kang et al. [46] conducted a comparative study of the surgical outcomes of robotic versus conventional open MRND, for PTC with lateral neck node metastasis. They reported that the robotic MRND was similar to conventional open MRND in terms of early surgical outcomes and surgical completeness, but with the additional advantage of leaving no scar on the neck area. Robotic MRND may, therefore, be viewed as an acceptable alternative method in low-risk PTC with LNs. Another study published in 2015 by Sannikorn et al. [18] compared endoscopic-assisted neck dissection via a retroauricular approach versus conventional technique. The study was applied on 70 patients with head and neck cancers. Results were comparable regarding the mean total excised LNs and operative time, but better aesthetic results were in favor of the endoscopic technique.

After the first endoscopic parathyroidectomy, performed and described by Gagner in 1996 [9], several surgeons reported their experiences with minimally invasive and video-assisted surgery of the neck [47–57]. Much of this change in technique has been technologically driven, in addition to the introduction of high-resolution endoscopy [58, 59] and advanced energy devices [60, 61].

Tags: Head and Neck and Endocrine Surgery
Jul 7, 2016 | Posted by admin in HEAD AND NECK SURGERY | Comments Off on Minimally Invasive Surgery in the Head and Neck
Premium Wordpress Themes by UFO Themes
WordPress theme by UFO themes