Anatomy of the submandibular space. It has two subdivisions separated by the mylohyoid muscle: sublingual space inferiorly and submaxillary superiorly

Infection in the submandibular space may be odontogenic in origin (90 %), usually from the second and third molars, or non-odontogenic (10 %) from mandibular fracture, tongue piercing, neoplasms, neck trauma, or sialadenitis. Infection usually starts in the submaxillary space and spreads to the sublingual space via the fascial planes rather than the lymphatics. The organisms most often isolated in patients with Ludwig’s angina are Streptococcus viridans and Staphylococcus aureus. Anaerobes, including Bacteroides, are also frequently involved. Gram-negative organisms that have been isolated include Neisseria, Escherichia coli, Pseudomonas, Haemophilus influenzae, and Klebsiella species.

There is usually history of recent dental procedure and dental pain. As the submandibular space is expanded by cellulitis or abscess, the floor of the mouth becomes indurated (Fig. 7.2), and the tongue is forced upward and backward, causing airway obstruction. There is typically a bilateral submandibular edema, with marked tenderness and, occasionally, subcutaneous emphysema. The swelling of the anterior soft tissues of the neck above the hyoid bone sometimes leads to a characteristic appearance known as “bull’s neck.” Lymphadenopathy and fluctuance are not usually seen in patients with Ludwig’s angina. Typically the patient presents also with drooling, trismus, neck pain, dysphagia, and dysphonia or, more specifically, a muffled tone at higher registers (“hot potato” voice) caused by edema of the vocal apparatus. Hoarseness, stridor, respiratory distress, decreased air movement, cyanosis, and a “sniffing” position (upright posture with the neck thrust forward and the chin elevated) are all signs of impending airway obstruction.

Ludwig’s angina (inflammation and cellulitis of the submandibular space)
In addition to airway compromise, complications of Ludwig’s angina may include cavernous sinus thrombosis and brain abscess. Other reported complications include carotid sheath infection and arterial rupture, suppurative thrombophlebitis of the internal jugular vein (IJV), osteomyelitis of the mandible, mediastinitis, pericardial and/or pleural effusion, empyema, subphrenic abscess, and aspiration pneumonia [7–11].

Plain X-ray (PXR) of the neck and chest often shows the soft tissue shadow, the presence of gas, and the extent of airway narrowing. Panoramic radiographic views of the jaw may show a dental focus of infection. Ultrasonography (US) does not reveal anatomic details but has been used to identify fluid collections in the soft tissues, as has gallium citrate Ga-67 scanning. Moreover, US can help distinguish between phlegmon and abscess, give information about the surrounding vessels, and guide fine-needle aspiration (FNA) attempts.
Contrast CT scan is the gold standard in the evaluation of deep neck infections. It indicates the location, boundaries, and relation of infection to surrounding neurovascular structures. It also shows the presence of gas, fluid collection, and airway compromise. Chest CT may be helpful if extension into the mediastinum is suspected. Although MRI scan provides an excellent soft tissue resolution to help localize the region of involvement, it is not considered to be the initial modality of choice because of the increased time and expense [12].
Differential diagnoses of Ludwig’s angina include angioneurotic edema, lingual carcinoma, sublingual hematoma (following anticoagulation), salivary gland abscess, lymphadenitis, cellulitis, and peritonsillar abscess (PTA).

The airway is the first priority of treatment [13]. Airway management is accomplished by immediate orotracheal or fiberoptic nasotracheal intubation. If the patient is not intubated, a tracheostomy or cricothyroidotomy should be performed for airway control. Tracheostomy should be performed before any attempts at surgical drainage in these patients [14]. Intravenous (IV) broad-spectrum antibiotics should be started before culture results are obtained based on the local resistance patterns and most common etiologies. After completion of an IV course of antibiotics and the patient is clinically improving and has been afebrile for at least 48 h, oral antibiotics are given [15]. Corticosteroids have also been recently added to the therapeutic regimen to reduce edema [16].

Surgical drainage is required in case of suppuration, which takes place in nearly 65 % of cases, and in patients with no improvement after 48–72 h of IV antibiotics. Separation of the superficial lobes of the submandibular gland and division of the mylohyoid muscles are, usually, necessary to decompress the fascial spaces [17]. The most important preoperative considerations are stabilization of a secure airway, volume and metabolic resuscitation, and initiation of antibiotics. Needle aspiration under CT or US guidance may be used in patients with small easily reachable abscesses or in patients who are too unstable to undergo general anesthesia. It may also provide preliminary culture specimens before formal incision and drainage. Postoperatively, the patient should be closely monitored for signs of response to therapy, reaccumulation or impending complications, and for culture and sensitivity results for appropriate tailoring of the antibiotics. The patient’s airway must also be monitored closely for any signs of obstruction.

The prognosis in Ludwig’s angina depends primarily on immediate protection of the airway and then on prompt antibiotic—and possibly surgical—treatment of the infection. Mortality in the pre-antibiotic era, the mortality rate of Ludwig’s angina was 50 %, but with the advent of modern antimicrobial and surgical therapies, the mortality rate has been markedly reduced to less than 5 % [8–10].

Peritonsillar abscess (PTA), also known as a quinsy or quinsey, occurs in the peritonsillar space, which is bounded by the tonsil medially and the superior constrictor laterally. The remaining borders are formed by the anterior and posterior tonsillar pillars. It is the most common DNSI that presents to the otorhinolaryngological emergency department and may spread to the parapharyngeal space if not managed promptly [18].

Peritonsillar abscess usually arises as a complication of an untreated or inadequately treated acute tonsillitis, but may also occur de novo. The commonly involved aerobic pathogens include Streptococcus, Staphylococcus, and Haemophilus. Anaerobic pathogens including Bacteroides have also been incriminated [19–24].
Dental infection (such as periodontitis and gingivitis) may be a risk factor. Other risk factors include chronic tonsillitis, infectious mononucleosis (IMN), smoking, chronic lymphocytic leukemia (CLL), and stones or calcium deposits in the tonsils (tonsilloliths).

Progressive unilateral sore throat and pain during swallowing are usually the earliest symptoms. As the abscess develops, persistent peritonsillar pain, pyrexia, malaise, headache, muffled voice, and distortion of vowels (hot potato voice) may appear. Neck pain associated with tender, enlarged LNs, otalgia, halitosis, dysphagia, and trismus are also common.
General physical signs include mild-to-moderate distress, fever, tachycardia, and dehydration. Locally, there is erythema and edema in the tonsillar area of the affected side (Fig. 7.3) with displacement of the uvula toward the unaffected side as well as enlargement and tenderness of the jugulodigastric LNs.

Peritonsillar abscess in the left peritonsillar space
Complications of PTA include septicemia, retropharyngeal abscess, and extension of the abscess in other deep neck spaces leading to airway compromise. The severity of complications depends on the timing of management, rapidity of illness progression, and characteristics of the affected fascial spaces.

Peritonsillar abscess is usually diagnosed based on history taking and careful physical examination. Laboratory tests and imaging are not used often. Monospot test may be ordered to rule out infectious mononucleosis (IMN) which is associated with up to 20 % of PTAs. Pus from the abscess may be sent for culture and sensitivity to select the appropriate antibiotic. Ultrasound, both lateral and intraoral, even CT scan with contrast (Fig. 7.4) may be ordered to delineate the abscess and determine its extent.

Patients with PTAs who are dehydrated require IV fluid administration until the inflammation resolves, and they are able to resume an adequate oral fluid intake. Antipyretics and analgesics are used to relieve fever and pain. Antibiotic therapy should begin after cultures of pus have been obtained. Infection is frequently penicillin resistant, so it is now common to treat with clindamycin [25] or metronidazole in combination with penicillin G benzathine [26]. Oral antibiotics may be prescribed once the patient is able to tolerate oral intake and should be continued for 7–10 days.
The use of steroids has been controversial. Ozbek et al. reported that the addition of a single dose of IV dexamethasone to parenteral antibiotics significantly lowered the length of hospital stay, throat pain, fever, and trismus as compared to only parenteral antibiotics [27].

Needle aspiration can be carried out in children as young as 7 years, especially if conscious sedation is used. The fluid aspirated may be sent for culture, and in some cases, it may not need to be followed by an incision and drainage (I&D).
Intraoral I&D is performed after localizing the abscess, the opening is left open, and the patient is asked to gargle with saline solution. Successful aspiration or drainage leads to dramatic relief of the patient’s symptoms.
Tonsillectomy with open I&D (quinsy tonsillectomy) has been a subject of controversy. Many studies have reported its safety, while others have shown that immediate or delayed tonsillectomy may not be necessary because of the high rate of success and low rates of recurrence and morbidity associated with intraoral drainage. However, when the abscess is located in an area that is difficult to access, a tonsillectomy may be the only means to drain it [28].

Most patients treated with antibiotics and adequate drainage of their abscess cavity recover within a few days. Patients presenting with recurrent abscess or chronic sore throat after proper I&D may require tonsillectomy.
Wang et al. reported that the risk of PTA recurrence increases with higher frequencies of previous tonsillitis in patients of all ages and in children managed with aspiration only [29].

The parapharyngeal space (PPS) (Fig. 7.5) is shaped like an inverted pyramid, with the skull base superiorly, and the greater horns of the hyoid bone, the apex, inferiorly. The posterior border is formed by the prevertebral fascia and by the posterior aspect of the carotid sheath (posterolaterally), while the anterior boundary is the inter-pterygoid fascia and the pterygomandibular raphe. The PPS can be subdivided into anterior and posterior compartments by a line extending from the medial aspect of the medial pterygoid plate to the styloid process.
The anterior (pre-styloid) compartment contains the internal maxillary artery, inferior alveolar nerve, lingual nerve, and auriculotemporal nerve (ATN). Infections in this compartment often give significant trismus. 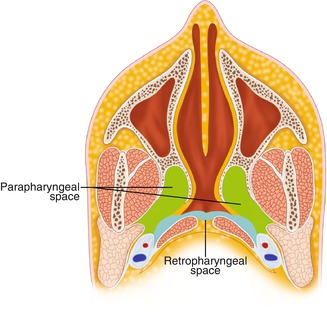 Anatomy of the parapharyngeal space
The posterior (post-styloid) compartment contains the carotid artery, internal jugular vein (IJV), last 4 cranial nerves, sympathetic chain, and lymphatics. This space provides a central connection for all other deep neck spaces. It connects posteromedially with the retropharyngeal space, inferiorly with the submandibular space, and laterally with the masticator space. It is directly involved by lateral extension of PTA, and the carotid sheath courses through this space into the chest.

Infections in the PPS usually originate in the tonsils or pharynx. Spread is by direct continuity or by lymphatic drainage. Thus, a parapharyngeal abscess may be secondary to tonsillitis or bursting of a PTA. Other sources include dental infection (usually from the lower last molar tooth), periostitis, other deep head and neck spaces, and penetrating trauma of the neck [30]. A parapharyngeal abscess may be also iatrogenic, from injection of local anesthetic for tonsillectomy or mandibular nerve block.
< div class='tao-gold-member'>
Only gold members can continue reading. Log In or Register to continue