A variety of congenital optic disc anomalies challenge the clinical acumen of ophthalmologists, internists, and pediatricians. Since some of these abnormalities are known by various names, it is worthwhile reviewing the general categories.

Megalopapilla is a rare anomaly of the optic disc, involving thinning of the nerve fiber across a large optic nerve head, and is often associated with large refractive errors and with midline congenital deformities.1

Aplasia of the optic nerve head is extremely rare, and probably represents an extreme form of optic nerve head hypoplasia, and may be associated with the absence or gross maldevelopment of the globe.1

Optic disc hypoplasia is a congenital underdevelopment of the optic nerve head with a reduced number of axons. Hypoplastic optic discs are often underdiagnosed and may vary in level of development, leading to variable levels of visual acuity and visual field defects.2

Cavities in the optic nerve head

Excavated and colobomatous defects of the optic nerve head encompass a spectrum of abnormalities, including tilted discs, peripapillary staphyloma, morning-glory disc anomaly, colobomas, and congenital optic disc pits. Optic disc pits were regarded as atypical colobomas by Grear,3 who reviewed the subject in 1942.

Optic disc pits should probably be considered one manifestation along a spectrum of cavitary optic disc anomalies. Slusher and coworkers4 described a family of 35 members spanning five generations with an autosomal dominant pattern of congenital optic disc abnormalities. Remarkably, a myriad of morphologic variations of phenotype were expressed, including optic disc pits, morning-glory syndrome, and coloboma of the optic nerve. One gene defect can result in a variety of optic disc abnormalities; therefore the traditional classification schemes that describe varieties of cavitary optic disc anomalies should be reconsidered.

A brief review of the anatomy and embryology of the optic nerve head permits a better understanding of these abnormalities.

The retinal ganglion cells of each retina contribute approximately 1.2 million unmyelinated axons that converge at a point approximately 4 mm nasal to the foveola, through which they exit the globe, acquire a myelin sheath, and form the optic nerve. These axons project to various primary visual nuclei in the brain,5 constitute a fiber tract rather than a nerve, and, as such, have histologic and functional similarities to brain tissue. The optic nerve is enclosed by three meningeal sheaths that are contiguous with the meningeal coverings of the brain. Before exiting the eye, however, the axons of the retinal ganglion cells must converge centripetally, make a sharp turn, traverse the lamina cribrosa, form nerve bundles enclosed by connective tissue septa, and then, once posterior to the lamina cribrosa, become ensheathed by myelin (Fig. 93.1).6 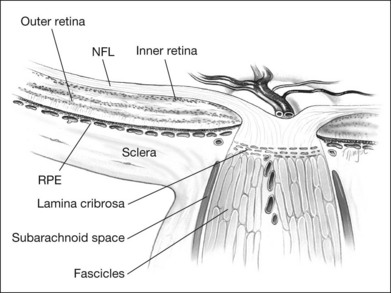 Thus, the optic nerve head is remarkable in several respects. Axons deriving from the retina become part of the nerve, go from an unmyelinated to a myelinated state, traverse the sieve-like lamina cribrosa, are partitioned into groups by glial columns, and go from an area of high (intraocular) pressure to relatively low interstitial pressure. Not surprisingly, anomalies of structure at this critical juncture often lead to marked physiologic consequences.7

Studies suggest that optic pits occur in approximately 1 in 10 000 eyes, although there is considerable variance among studies.3,9 Men and women are equally affected. Approximately 10–15% of optic disc pits are bilateral. Most optic disc pits are nonfamilial; however there are a few reports with an autosomal dominant pattern of inheritance.10 One such report describes a family for which several members had small iris colobomas, some in combination with the pit, providing insight as to the etiology.11 About 70% of the pits are on the temporal side of the disc, and about 20% are situated centrally; the remainder are found inferiorly, superiorly, and nasally.12

Serous retinal detachments can be associated with optic disc pits. These may occur at any age but are most frequent in early adulthood. However, there have been reports of associated retinal detachment occurring as early as 6 years of age and in patients as old as in the ninth decade of life.12 Some have suggested that the clinical course differs and leads to better visual acuity in children as spontaneous resolution is the rule.13,14 Through the analysis of stereoscopic transparencies, it has been proposed that the fluid that enters through the optic disc pit actually travels between the inner and outer layers of the retina to produce a retinal schisis.15,16 Optical coherence tomography (OCT) has shown such inner retinal schises preceding outer-layer detachment.17 Following this, detachment of the outer retinal layer may occur as a secondary process.17 Although no histopathologic studies have confirmed this, the application of OCT has provided compelling evidence for at least two levels of retinal separation (Fig. 93.2).18 OCT has also been used to demonstrate a marked reduction in thickness of the retinal nerve fiber layer in the quadrant corresponding to the optic nerve pit.19

In the series of Brown et al.,12 most optic disc pits were gray in color, although they varied from yellow to black. Their size can range from minute to large, occupying most of the surface of the optic disc.

The optic disc pit is most often associated with two types of visual field defect.20 The first type is typified by arcuate scotomas that probably reflect the absence of the wedge of nerve fibers displaced by the optic disc pit. Larger pits may be associated with large Bjerrum-type scotomas or even altitudinal visual field defects. Nasal or temporal steps are often detectable; less frequently, paracentral scotomas and generalized constriction may be seen.12 However, Walsh and Hoyt21 reviewed several studies that demonstrated only an enlarged blind spot as a forme fruste of the visual field defect in association with optic pits.

Optic nerve head pits that are centrally located are least likely to be associated with retinal changes. Optic disc pits along the rim of the optic disc are usually seen in association with peripapillary chorioretinal atrophy and retinal pigment epithelium changes (Fig. 93.3). These peripapillary changes may develop over time with or without central serous retinal detachments. In following the development of a serous macular detachment, Walsh and Hoyt21 described the appearance of what they termed an “occult hole” in the optic nerve head. 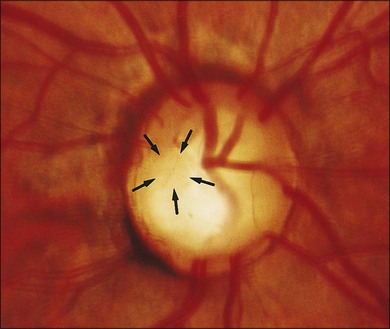 Fig. 93.3 Optic disc pits near the temporal margin are common and are most likely to lead to serous macular detachments (arrows).

Serous detachment of the macula is now known as a common complication of the optic disc pit. The natural history of this complication has been well described by Sobol et al.23 They followed 15 patients with optic disc pits and macular detachments for an average of 9 years and found that 80% lost vision to 20/200 or worse. The visual loss was generally complete within 6 months of presentation. Long-term macular changes included full-thickness or laminar (through the outer retina) retinal holes, retinal pigment epithelium mottling, and general cystic changes of the macula.23

Vascular telangiectasis has been reported in connection with intraschistic hemorrhage from a temporal optic disc pit.24 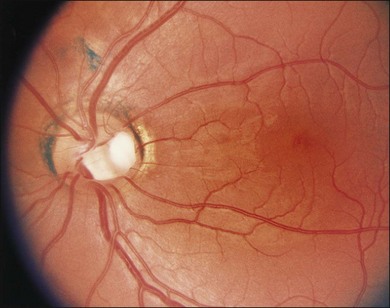 Several investigators have estimated that between 40 and 50% of patients with optic nerve pits have either an associated nonrhegmatogenous, serous retinal detachment or retinal changes suggestive of previous detachment.12,25 The macular serous detachment (or retinoschisis) seen in association with optic disc pits appears most commonly when the pit is located in the temporal region of the optic disc and in larger pits. Conversely, small pits and those located more centrally are less likely to lead to serous retinal detachments.12,22

In 1908, Reis26 described a case of an optic nerve pit with associated maculopathy. However, this association was not taken seriously until Petersen,27 in 1958, described several patients with what he called crater-like holes in the optic disc; these patients also had a central serous chorioretinopathy. This relationship was firmly emphasized by Kranenburg22 in 1960, who described 24 cases of optic disc pits. One-third of these patients had serous retinal detachments, and another third had macular changes that he interpreted as reflecting a previous episode of nonrhegmatogenous serous retinal detachment.

The serous macular detachments are generally low (less than 1.0 mm in height). The elevated retina often contains cystic regions that have been demonstrated on histologic examination to exist within the inner nuclear layer.9 Occasionally the cystic areas rupture outward, producing a lamellar macular hole that, unlike idiopathic lamellar macular holes, retains an intact internal limiting membrane.

The variability of the retinal separation is also consistent with an alternative description of the maculopathy proposed by Lincoff and colleagues.28 In a case report they provide clear OCTs to show a schisis cavity between the inner and outer retina and a larger outer-layer retinal detachment. The two are connected by a hole in the outer layer near the fovea.28