Incidence in the United States has tripled over the last 20 years both in immunocompromised and immunocompetent individuals.

100 new cases of PIOL each year

The incidence of PCNSL is 4 to 5 per 1000 person-years among patients with AIDS and 0.3 per 100,000 persons-years in immunocompetent patients.

25% of PCNSL patients have eye involvement at the time of presentation, whereas up to 85% of PIOL develop PCNSL.

It typically affects an older population, usually in the fifth to sixth decades of life.

Bilateral in approximately 80%, but can be very asymmetric at presentation

Immunosuppression (secondary to AIDS or transplantation) is a risk factor. Infectious agents (Epstein-Barr virus, human herpes­virus 8, Toxoplasma) have been associated with PIOL. However, there have been no clear genetic or infectious markers to suggest susceptibility to PIOL.

The diagnosis is difficult, and requires malignant cells or tissue for diagnosis.

Current therapies are not curative.

Systemic chemotherapy is the mainstay of treatment even when associated PCNSL is not found. Adjunct local chemotherapy can be administered.

Systemic therapy: High-dose methotrexate; cyclophosphamide, adriamycin, vincristine, and prednisone; cytarabine; radiotherapy, and rituximab have all been tried with various degrees of success.

Recurrence and complications tend to be higher with radiation.

Median progression-free survival is less than 3 years, and overall survival is approximately 5 years and appears to be unaffected by treatment type.

Systemic spread outside of the CNS is extremely rare (<10% in autopsy specimens).

Ocular complications can include glaucoma, cataract (both due to inflammation or radiotherapy), retinal and/or optic nerve atrophy, vitreous hemorrhage, and retinal detachment.

Figure 13-1. A. Diffuse, small- to medium-sized keratic precipitates in a patient with PIOL. B. There are large granulomatous-appearing pigmented KPs intermixed with stellate KPs more centrally. 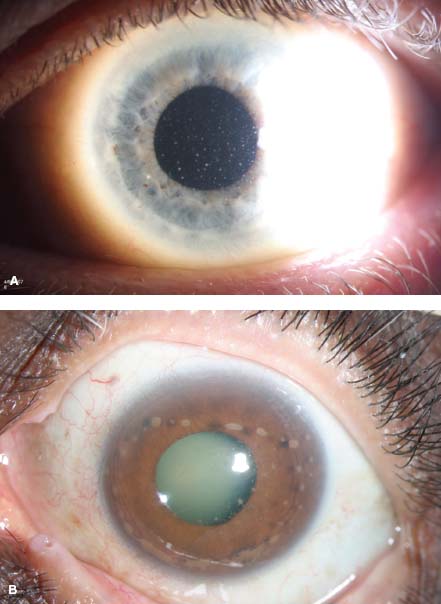 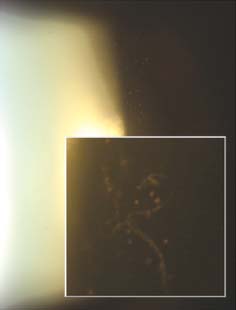 Figure 13-3. Top: A 67-year-old Asian man with PCNSL and PIOL had large subretinal masses in the right eye and diffuse subretinal infiltrates in the left eye with significant vitreous haze. Bottom: The same patient following treatment with resolution of tumor infiltration. 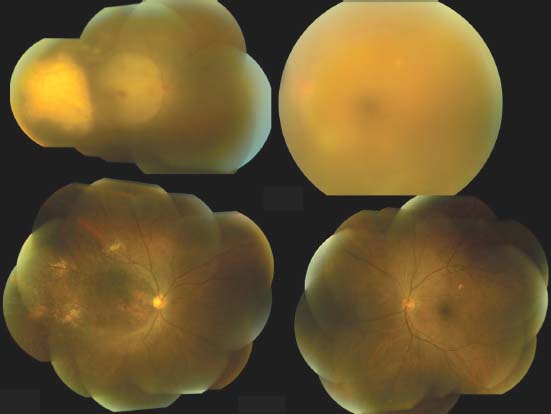 Figure 13-4. A, B. There is a large white-yellowish subretinal infiltrate temporal to the macula. The fluorescein angiogram shows granular (punctate) RPE perturbance throughout (C) and early blockage (D) . E. There is late staining of the large temporal infiltrate. F. MRI shows a solidly enhancing, apparently hypercellular mass in the left temporal lobe with surrounding edema. A brain biopsy was consistent with PCNSL. 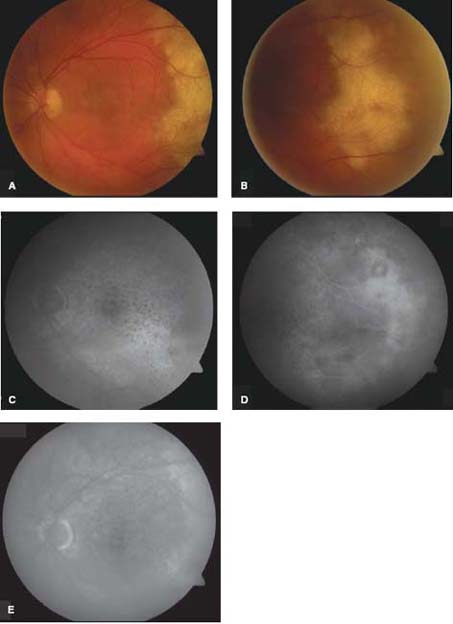 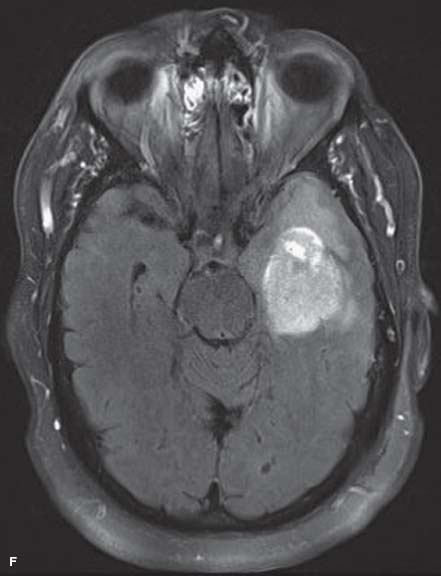 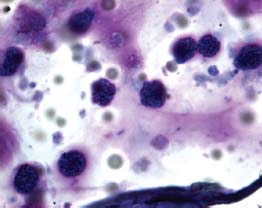 Retinoblastoma classically manifests as a solitary or multifocal, well-circumscribed retinal mass with dilated feeding vessels. Initially, this tumor appears as a subtle, trans­lucent intraretinal mass. As the tumor enlarges, it assumes an exophytic, endophytic, or combined growth pattern. Exophytic retinoblastoma appears as a tumor with overlying subretinal fluid, whereas endophytic tumor appears as a mass with seeding into the vitreous cavity. A rare growth pattern is diffuse infiltrating retinoblastoma where the tumor assumes a relatively flat, ill-defined horizontal growth pattern along the retinal tissue, simulating uveitis or vitritis. Diffuse retinoblastoma seeds into the anterior segment with neoplastic pseudohypopyon and can cause intraocular hemorrhage, further confusing the findings. Often diffuse retinoblastoma is mistaken for uveitis.

Retinoblastoma is the most common cancer of the eye in children. It is estimated that there are over 7000 cases per year worldwide with approximately 1800 in Africa, 4000 in Asia, 400 in Europe, 300 in the United States, and 600 in South America.

The mortality rate from retinoblastoma varies depending on the continent, with 70% mortality in Africa, 40% in Asia, 20% in South America, and <>5% in Europe and the United States. Diffuse retinoblastoma represents <3% of all cases.

In the largest published report on this condition (34 cases), there were no cases of metastatic disease, as the eye was treated promptly.

Often there are no complaints of vision loss, as young children tend to ignore visual compromise.

B-scan ultrasonography: Demonstrates retinal mass with possible intralesional dystrophic calcification. One must look closely for the calcification, as it might just be a fleck of calcium and not be obvious.

Fluorescein angiography: Demonstrates dilated feeding artery and draining vein leading to a retinal mass. The mass might be minimally thickened and subtle.

MRI: Demonstrates the intraocular mass but will not show the calcification.

Fine-needle aspiration biopsy (FNAB): Should be reserved for cases that are diagnostically challenging. If retinoblastoma is present, tumor seeding into the orbit with risk for metastasis could occur as a result of the FNAB. This test should only be used if retinoblastoma is not high on the differential diagnosis. Usually FNAB is performed through the pars plana, but this should not be done in cases of possible retinoblastoma. Instead, the FNAB should be performed into the anterior chamber for an aqueous sample. Care should be taken not to seed tumor cells and cryotherapy should be performed at the entry site at completion of the procedure. If a vitreous specimen is needed, the pars plan route should be avoided. A preferred approach would be through the peripheral cornea, into the anterior chamber, through the peripheral iris, through the zonules (avoiding the lens), and into vitreous in an anteroposterior direction. Cryotherapy to the entry site is performed. This is a difficult procedure. Immediate cytologic preparation with preservative is important.

Most cases of diffuse retinoblastoma are extensive with tumor seeding into the vitreous cavity and anterior chamber, necessitating enucleation.

Administration of intravenous or intra-arterial chemotherapy can be attempted, but the vitreous seeds might not completely respond and could show later recurrence.

External beam radiotherapy can be employed, but a high recurrence of vitreous seeds is anticipated.

Good if there is no invasion of the optic nerve, choroid, sclera, or orbit.

Poor if there is invasion of those structures. Adjuvant systemic chemotherapy to prevent metastasis should be given in cases of invasive retinoblastoma.

Figure 13-6. A young child with blurred vision and a red eye. A. A pseudohypopyon is noted. There are also subtle seeds along the pupillary margin at 9:00. B. Fundus evaluation shows diffuse vitreous tumor cells present. The vitreous cells are white and homogenous in appearance.

Figure 13-7. This child presented with a white eye and decreased vision. A. There is a white pseudohypopyon present. B. On fundus examination there are scattered vitreous seeds (opacities) that are stark white in color.