The immune response is a complex system that protects the body from harm. Ideally, the immune response recognizes pathologic material and then eliminates it with minimal collateral damage. Autoimmune diseases occur when these responses malfunction.

The eye has no lymphatic drainage, so it protects itself in other ways.

The first way is physical protect on from the skin, eyelids, eyelashes, blink reflex, tears, and tear pH.

If the physical defenses do not work, soluble inhibitors, such as immunoglobulin A (IgA) and lysozymes, can block the effects of an antigen.

If that does not work, the body can attempt to kill or neutralize the antigen through both innate and adaptive immunity.

If the body still cannot get rid of a particular pathogen, it can tolerate it through anterior chamber–associated immune deviation (ACAID).

This type of reaction does not improve with subsequent exposures and has a limited repertoire.

In contrast, adaptive immunity is antigen specific. When challenged by a novel organism or virus, the naïve immune system recognizes the material as foreign, processes the material, and then responds with an antigen-specific immune reaction.

BUILDING BLOCKS OF THE IMMUNE RESPONSE

Polymorphonuclear neutrophils (PMNs, or “polys”) are cells that travel in the bloodstream. When recruited toward inflamed tissues, they adhere to the blood vessel wall and exit via diapedesis through gaps between cells that make up the vessel wall.

Figure 1-1. A. Polymorphonuclear leukocytes “neutrophils” are the most common phagocytes and can rapidly leave the bloodstream to engulf bacteria and damaged tissue. They have a multilobed nucleus. B. Macrophages play a critical role in eradicating microbes and damaged and/or dysplastic cells, in antigen presentation, and in inflammatory regulation. They are called histiocytes when they enter tissue. In this example, the cytoplasm is filled with lens material in a patient with phacolytic glaucoma. C. Eosinophils play an important role in fighting parasites and bacteria; they also play a role in the allergic response and in asthma. These cells characteristically have multiple, red cytoplasmic granules that surround a large nucleus. D. Plasma cells are white blood cells that are antigen specific. They can rapidly produce a large quantity of antibodies. (Note the characteristic “cart wheel” appearance.) Plasma cell dysregulation can lead to diseases such as multiple myeloma and Waldenström’s macroglobulinemia. (Courtesy of Ralph Eagle, MD.) 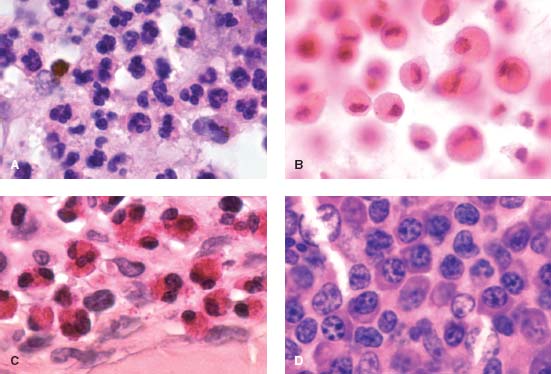 Once in the inflamed site, they engulf (phagocytize) and destroy the targeted antigens.

These cells have a brief lifespan.

These are a second group of cells that phagocytize abnormal material. Examples include monocytes in the blood and Kupffer cells in the liver. These cells live much longer than PMNs. Blood-borne monocytes migrate into tissues and become tissue macrophages (histiocytes).

They play a scavenging role.

They present antigens to T cells (in conjunction with their MHC molecules).

Eosinophils constitute 2% to 5% of blood leukocytes.

They are seen in skin infiltrates (late phase reaction), atopic reactions, asthma, and around parasites.

Certain immune stimuli cause these cells to degranulate and fuse their granules to the plasma membrane.

In theory, large pathogens, such as parasitic worms, are too large to be engulfed. Eosinophils surround them and release their granules into the extracellular space in order to destroy the parasite.

These cells constitute less than 0.2% of leukocytes in the bloodstream.

The IgE receptor is activated by IgE (which is in turn activated by allergens). This leads to cell degranulation (with release of histamine, heparin, leukotrienes, and eosinophil chemotactic factor of anaphylaxis).

When endothelial cells are injured, platelets are attracted to the area and then release serotonin and thrombin. This activates complement, which increases vessel permeability, and attracts leukocytes to the site of injury.

Antigen specificity of the B cell is based on molecular recognition by antibodies.

Upon exposure to an antigen, most B cells become plasma cells (antibody-forming cells), whereas a small group become memory cells (once they are exposed to an antigen, they remember it).

Upon repeat exposure to an antigen, the B cells that have antibodies targeted against the antigen respond and make more antibodies.

Antibodies are molecules produced in response to antigen exposure, and they can bind with a high degree of affinity to the antigen that stimulated its production.

The root structure of any immuno­globulin is made of four polypeptide chains (two identical heavy and two identical light chains).

The heavy chain determines the class and isotype of the Ig (i.e., IgG vs. IgA).

There are several mechanisms that lead to the rich assortment of antibody specificities that may be seen. These range from gene recombination to somatic mutation.

The repertoire is not genetically preprogrammed, but rather the result of amazing molecular genetics.

A brief discussion of each of the major Ig classes follows:

These constitute the majority (70% to 75%) of serum immunoglobulins.

They play an important role in secondary immune responses, and their presence signifies previous antigen exposure.

IgG can cross into the placenta and also passes freely into extravascular spaces.

These make up between 5% and 10% of serum immunoglobulins.

They are important in primary immune responses (signifies recent/current infection).

IgM remains (mostly) in the intravascular space because of its large size.

IgA dimers are actively transported across mucosal membranes and are found in the various mucosal surfaces (i.e., the conjunctiva and the respiratory, intestinal, and genitourinary tracts).

IgE makes up less than 1% of serum immunoglobulins.

IgE binds to eosinophils, basophils, and mast cells, resulting in release of histamine and other pro-inflammatory mediators. It plays a role in helminthic infections and allergic reactions.

T-cell receptors (TCRs) are the basis for T-cell antigen specificity.

Antigen recognition requires that the antigen be presented by an antigen-presenting cell (APC; usually a macrophage or a dendritic cell). Antigenic peptide fragments are presented in conjunction with an MHC molecule on the surface of the APC. A T cell with CD3 protein and either a CD4 or a CD8 protein also needs to be present on the cell for the TCR complex to work properly.

The ability of a T cell to recognize and respond to a specific antigen is critical to an effective immune system. The TCR is the basis for T-cell antigen specificity.

TCRs share some basic molecular building blocks with antibodies, yet they play a different role. Diversification of the TCR results from gene recombination that is similar to that of antibodies.

Large Granular Lymphocytes (not B, not T)

Another subset of lymphocytes that comprises ≈15% of circulating lymphocytes. These cells are adept at killing virally infected cells and tumor cells.

Natural killer (NK) cell activity is not antibody dependent. Instead, cells that do not display a “friendly” MHC are killed by NK cells (this is a form of negative identification).

The MHC holds an antigenic peptide fragment in a binding groove and present these fragments to TCRs. CD4 and CD8 proteins on the T-cell surface function as co-receptors (with TCRs) for the MHC molecule.

The MHC, like TCRs and antibodies, are members of the immunoglobulin super-family with many of the same basic domain structural units as antibodies. In humans, the human leukocyte antigen (HLA) proteins are located within the MHC on chromosome 6.

Each individual has six pairs of HLA haplotypes (six from each parent: there are two HLA-As, two HLA-Bs, etc.).

MHC haplotype affects a number of different aspects of the immune system, including disease susceptibility to specific infections and autoimmune diseases, the ability to produce antibodies, and organ transplant rejection.

Cytokines are a group of more than 200 small signaling proteins that are traditionally named based upon their functions. They allow communication between cells. The main types of cytokines are:

Interferons, which play a role in limiting viral infections

Growth factors, which can mediate cell proliferation and maturation

Complement (aka the complement system) plays a very important role in inflammation and immunity. There are more than 20 complement proteins, and together they constitute 10% of serum proteins.

There are two major pathways for complement activation: the classical and the alternative (innate) pathways.

Complement helps control inflammation, the action of phagocytes, and the membrane attack complex.

Recruitment of PMNs via chemotaxis and induction of inflammation via anaphylotoxins

Coating of antigen/pathogen by C3b to enhance phagocytosis; this process is called opsonization.

These are excessive immune reactions.

A useful mnemonic to remember the different reactions is ACIDS (Type 1 is Anaphylactic, Type 2 is Cytotoxic, Type 3 is Immune complex, Type 4 is Delayed-type hypersensitivity, Type 5 is Stimulatory).

Type 4 is unique because it is T-cell mediated.

This is the production of IgE in response to antigen exposure (i.e., molds, pollens). Antigen cross-links IgE on the surface of mast cells and basophils, which release histamine, leukotrienes, and cytokines.

This is typified by antibodies directed at cell membranes. Together with complement activation, it can lead to cell lysis.

These are antibody–antigen complex deposition-related diseases.

Ocular examples: Effects of the preceding systemic diseases on the eye

This is unique because these are T-cell–mediated inflammatory reactions that take ≥12 hours to develop.

Ocular examples: The PPD test and the preceding systemic diseases

Antibodies directed against receptors activate the receptors. For instance, in Graves’ disease, an antibody against the thyroid stimulating hormone (TSH) receptor is believed to activate the receptor driving hyperthyroidism. Myasthenia gravis provides another example of an antibody that has an effect on a receptor. In this case, anti-acetylcholine antibodies lead to internalization of the acetylcholine (ACH) receptor and a depletion of the number of active receptors.

IMMUNITY AND THE EYE

The eye—along with the brain, the pregnant uterus, the adrenal cortex, hair follicles, testes, and ovaries—resists immune rejection.

There are several passive reasons for this, including the blood–eye barrier, minimal lymphatic drainage, and little MHC expression in the eye. A number of cell-surface proteins also inhibit the immune system in the eye.

Antigens that are delivered into the anterior chamber can lead to an immune response that is different than if the antigen were delivered elsewhere (e.g., the skin).

If the body cannot get rid of an antigen, it can learn to tolerate it without causing an inflammatory response.