Cholesteatoma is an antiquated term that has persisted through generations of use. Cholesteatoma would have been better named keratoma.1 It is a growth of keratinizing squamous epithelium originating from the external layer of the tympanic membrane or ear canal that invades the middle ear cleft (the air-containing space that is medial to the plane of the tympanic membrane) (Fig. 1.1). Cholesteatoma has two components—the acellular keratin debris, which forms the contents of the sac, and the matrix, which forms the sac itself. The cholesteatoma matrix consists of an inner layer of keratinizing squamous epithelium and an outer layer of subepithelial connective tissue (perimatrix). The matrix is the biologically active component of the cholesteatoma: the epithelial layer produces the keratin, whereas the subepithelial layer contains mesenchymal cells that can resorb bone and that give the cholesteatoma its invasive properties.

Cholesteatoma is a destructive process that invades the middle ear and causes damage by passive growth and active destruction of adjacent bony structures. Cholesteatoma first forms when keratinizing squamous epithelium from the external canal traverses the plane of the tympanic membrane. Once this plane is breached, the cholesteatoma sheds squamous debris into its center and grows passively to occupy the middle ear cleft (which consists of the eustachian tube, middle ear, and mastoid air cell system). But cholesteatoma is not merely a passive process; it is actively invasive. The cholesteatoma matrix produces proteolytic (collagenolytic) enzymes that can erode bone. Cholesteatoma can also become secondarily infected, leading to malodorous discharge.

Cholesteatomas can be congenital or acquired, the latter occurring far more frequently. Acquired cholesteatomas can arise by three pathogenetic mechanisms.2,3 By far the most common is retraction, by which the keratinizing squamous epithelium of the tympanic membrane invaginates into the middle ear from the pars tensa or into the attic (epitympanum) from the pars flaccida (Fig. 1.2A,B). Basal hyperplasia may also occur, whereby keratinocytes invade the subepithelium by breaking through the basement membrane.4 A retraction pocket cholesteatoma is termed a primary acquired cholesteatoma. A second mechanism is by epithelial migration from the edges of a tympanic membrane perforation, termed secondary acquired cholesteatoma (Fig. 1.3). The third (potential) mechanism is by squamous metaplasia, transformation of the nonkeratinizing mucosal lining of the middle ear into keratinizing squamous epithelium (the least common mechanism, and some even doubt that this ever occurs). Congenital cholesteatomas are epithelial rests that become entrapped in the middle ear cleft during embryogenesis.5 They appear as a keratin sac behind an intact tympanic membrane (Fig. 1.4). They are believed to occur from failure of the normal involution of embryonic epidermoid tissue; this squamous epithelium trapped within the middle ear during embryogenesis is most commonly attached to the anterior border of the tensor tympani muscle but may also be attached to the stapedial tendon. 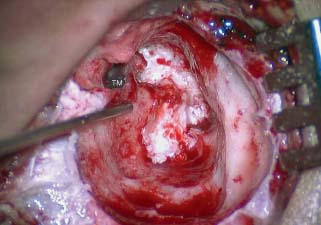 Fig. 1.1 Cholesteatoma should properly be named keratoma. It is an epithelial sac containing keratin debris that grows from the eardrum into the mastoid. As shown here, cholesteatoma can attain quite a large size. TM, tympanic membrane.

The clinical behavior of cholesteatoma can vary over time. Cholesteatoma may grow insidiously at first, and can attain a significant size without causing any symptoms other than hearing loss (Fig. 1.5). Over time, the cholesteatoma will usually become infected, leading to malodorous discharge (Fig. 1.6). The discharge may respond to treatment with antibiotic ear drops, but the improvement is usually only temporary. Recurrent or persistent ear discharge should make one suspect cholesteatoma, even when the lesion is not clinically evident. 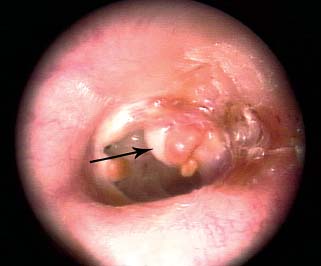 Fig. 1.3 Cholesteatoma may also arise from migration of keratinizing squamous epithelium into the middle ear space from a tympanic membrane perforation (arrow). This is termed secondary acquired cholesteatoma.

Bone erosion is responsible for the invasive nature of cholesteatoma.6–9 Erosion of the lateral epitympanic wall (scutum) occurs early as the cholesteatoma expands into the attic (Fig. 1.7A). Erosion of the ossicles (the lenticular process of the incus and the superstructure of the stapes) occurs as the cholesteatoma grows into the middle ear, and causes conductive hearing loss (Fig. 1.7B). Erosion of the bony septations of the mastoid appears as coalescence on computed tomographic (CT) radiographs; this finding, plus scutum erosion, is the radiologic hallmark of cholesteatoma. Erosion of bony partitions between the mastoid air cell system and inner ear and intracranial structures permit complications to occur (complications are defined as spread of disease outside of the pneumatized portions of the temporal bone and include suppurative (coalescent) mastoiditis, labyrinthitis, facial nerve paralysis, petrositis, and intracranial infections). 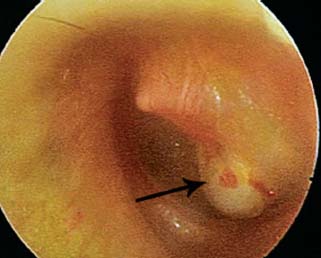 Fig. 1.4 Congenital cholesteatoma is an epithelial sac or pearl behind an intact tympanic membrane (arrow). 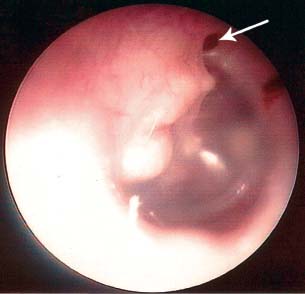 Fig. 1.5 Cholesteatoma can grow insidiously. Here a large sac is seen in the middle ear, which arose from a small attic retraction (arrow). The patient was a young child who had no hearing loss and no history of infection. 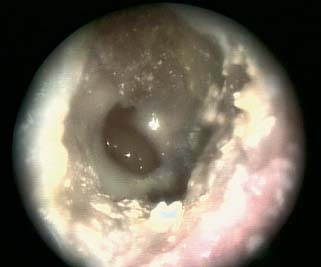 The anatomical patterns of growth of cholesteatoma are determined by the mucosal partitions of the middle ear and attic. A one-cell-thick layer of low cuboidal epithelium lines the middle ear promontory and attic and envelops the ossicles in the same way that the mesentery envelops the intestines. The mucosal folds form the epitympanic spaces of von Troeltsch, which divide the attic into three spaces: a lateral epitympanic space (the Prussak space) situated between the scutum and the malleus head and incus body, the anterior epitympanic space demarcated posteriorly by the bony “cog,” and the posterior epitympanic space surrounding the incus and malleus and leading posteriorly to the aditus ad antrum (Fig. 1.8A–D).

The posterior and anterior epitympanic pouches were first described by von Troeltsch,10 based on the work of Hammar,11 who in fetuses had described the formation of various epitympanic mucosal folds. Prussak12 later described the “superior pouch of the tympanic membrane,” a small air space that is bounded laterally by the Shrapnell membrane, medially by the malleus neck and head, anteriorly by a membrane toward the anterior pouch, superiorly by the lateral malleal ligamental fold. Posteriorly it is open to the posterior pouch. (These spaces are illustrated in Fig. 1.9.) The Prussak space is thus aerated from the superior portion of the tympanic cavity. Siebenmann13 in the 19th century summarized the knowledge of the epitympanic folds, pointing attention to a “transverse membrane,” the tensor fold, which separates the anterior epitympanum from the supratubal recess. In his drawings he depicted the anterior and posterior pouches and showed the division of the lateral attic into an upper and lower compartment by the thin incudomalleal fold. Aeration of the large epitympanic compartments above the diaphragm, as well as of the antrum and mastoid cells is provided by the tympanic isthmus. The isthmus extends from the posterior medial incudal ligament anteriorly up to the tensor tendon (Fig. 1.9).

In 1964, Proctor14 depicted the anterior, posterior, and lateral epitympanic spaces as he understood them, and for years these illustrations have been widely accepted and used to explain the paths of spread of cholesteatoma. Palva and Ramsay15 recently wrote an excellent article that questioned Proctor’s drawings, based on microdissection of 125 temporal bones, histologic study, and rereading of the original descriptions by the early anatomists. Palva’s research group has described in detail the epitympanic diaphragm, which separates the large epitympanic compartments from the Prussak space and from the mesotympanum15 (Fig. 1.10). It consists, in the direction anterior to posterior, of the tensor fold, the anterior and lateral malleal ligamental folds (the latter forms the roof of the Prussak space), the lateral incudomalleal fold, and the posterior incudal folds. The tensor fold and the lateral incudomalleal folds are thin duplicate folds, arising from a fusion of two advancing, opposing air sacs. The ligamental folds arise when the air sacs with the advancing epithelium, deriving from the eustachian tube, passes the preexisting ligaments. The anterior portion of the incudomalleal fold regularly turns inferiorly, uniting with the posterior portion of the roof of the Prussak space in the lateral malleal space. All compartments above the epitympanic diaphragm communicate with the antrum through the aditus. 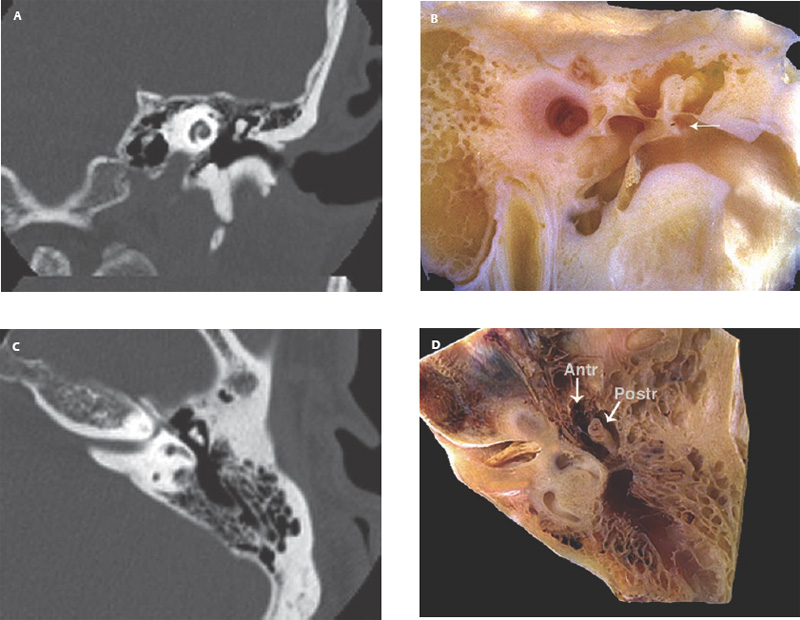 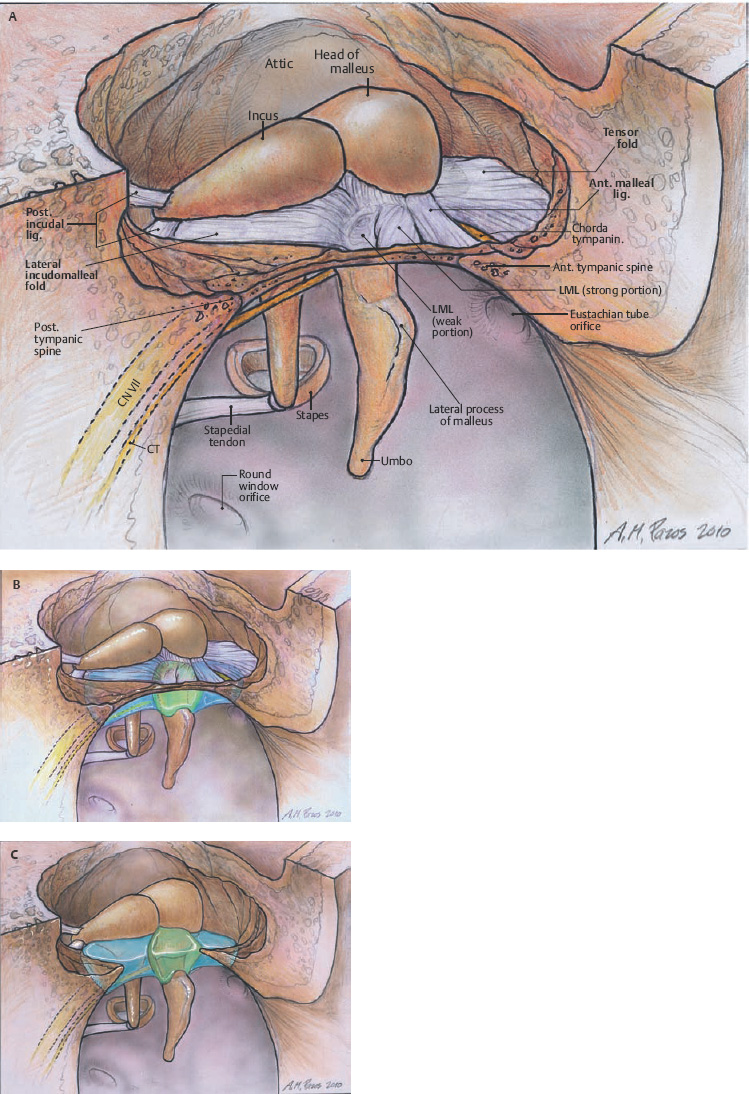 Fig. 1.9 (A) The epitympanic spaces described by von Troeltsch and Prussak, viewed from a lateral perspective, as they would appear to the surgeon, and from slightly above for artistic clarity. The epitympanic diaphragm divides the epitympanum into an upper and lower part. It consists, in the direction anterior to posterior, of the tensor fold, the anterior and lateral malleal ligamental folds (LML), the lateral incudomalleal fold, and the posterior incudal folds. (B) The lateral epitympanic (Prussak) space, shown in green, is bounded laterally by the Shrapnell membrane and medially by the neck of the malleus. The anterior and posterior epitympanic pouches, shown in blue, are separated from the Prussak space by thin membranes and are bounded superiorly by the lateral malleal fold, which forms part of the epitympanic membrane. The epitympanic diaphragm, consisting mainly of the lateral incudomalleal ligament and the duplicate mucosal membranes, separates the attic into upper and lower parts. The upper attic, which is superior to the malleus head and incus, communicates freely with the antrum through the aditus. (C) For clarity, the spaces are shown with the epitympanic diaphragm removed. 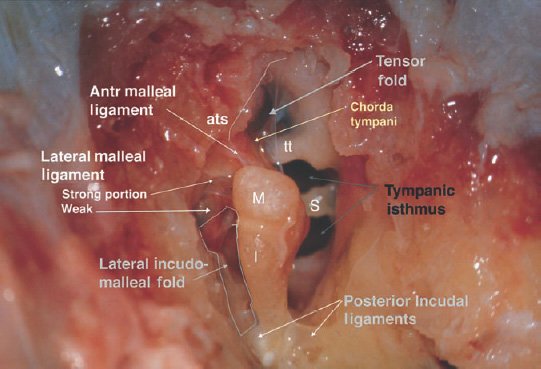 Fig. 1.10 Photograph of epitympanic dissection showing the structures that form the epitympanic diaphragm. This is a left ear, viewed from superiorly, looking down. (From Palva T, Ramsay H, Northrop C. Color Atlas of the Anatomy and Pathology of the Epitympanum. Basel, Switzerland: Karger; 2001. Reproduced courtesy of Professor Tauno Palva.)

The elegant publications of Palva’s group15,16 provide a clear explanation of the potential paths of the spread of cholesteatoma. Attic cholesteatoma that begins as a papillary ingrowth from the pars flaccida into the Prussak space will remain confined to this space if discovered early. Further extension occurs regularly via the posterior pouch, along the medial wall of the tympanic membrane into the superior mesotympanum (Fig. 1.11). Due to the relatively frequent membrane defects in the posterior malleal ligamental fold (36%) extension may also occur directly to the lower lateral attic and to the superior mesotympanum. Extension superiorly can occur via a membrane defect or through the nonligamental weak portion of the roof of the Prussak space, leading to the lateral malleal space; from there the routes are open to all compartments of the epitympanum. Cholesteatoma that begins as a migrating ingrowth from the epidermal cells of the pars tensa can extend into the lower lateral attic and, via the tympanic isthmus, to all superior compartments of the epitympanum (Fig. 1.12). The supratubal recess, located in the anterior mesotympanum above the eustachian tube opening, can be invaded very rarely by a defect in the anterior membrane of the Prussak space, or in absence of the posterior pouch, from the lower lateral attic directly (Fig. 1.13). 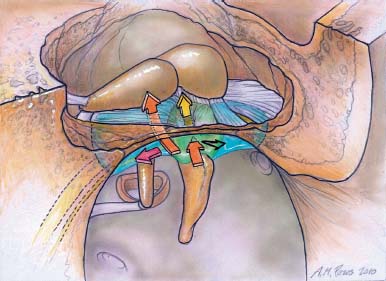 Fig. 1.11 Attic cholesteatomas that begin in the pars flaccida (short orange arrow) will remain confined to the Prussak space if discovered early. These cholesteatomas can enlarge into the posterior epitympanic space, via the posterior pouch (red arrow), or along the medial wall of the tympanic membrane into the superior mesotympanum (green arrow). Extension may also occur superiorly via a membrane defect (long orange arrow) or through the nonligamental weak portion of the roof of the Prussak space (yellow arrow), leading to the lateral malleal space; from there the routes are open to all compartments of the epitympanum. 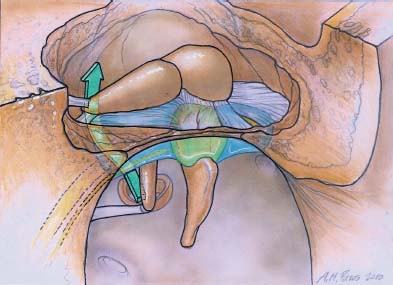 Fig. 1.12 Cholesteatoma that begins from the pars tensa can extend into the lower lateral attic, and via the tympanic isthmus, to all superior compartments of the epitympanum.

These pathways of spread give rise to the patterns of growth of cholesteatoma that are encountered at surgery and have been classified as follows by Fraysse and others (Fig. 1.14A–E):

4. Congenital cholesteatomas begin in the middle ear cleft, usually the anterosuperior quadrant attached to the tensor tympani tendon and processus cochleariformis, but may enlarge in all directions.