Congenital cholesteatomas are usually discovered in infants or young children on routine physical exam. They appear as a white mass behind an intact tympanic membrane (Fig. 9.1). The average age at presentation is ∼4 years. In the original description of congenital cholesteatoma by Derlacki and Clemis,4 the diagnosis required that the ear be otherwise completely normal, with no history of otitis media. Because the incidence of otitis media is high in the general population of children, however, a history of ear infection or the presence of a middle ear effusion should not disqualify the diagnosis, as long as there is no history of otorrhea and the tympanic membrane is free of perforation or retraction. In fact, a certain number of congenital cholesteatomas will first be discovered during a myringotomy for serous otitis.

The treatment of congenital cholesteatoma is surgical. These should be operated on when first discovered, to prevent the potential problems associated with continued growth. Anteriorly situated cholesteatomas can usually be removed via an extended tympanotomy approach, as described by Levenson et al.1 A transmeatal approach can usually be employed, even in younger children, but it is acceptable to use a postauricular incision to gain adequate exposure if the meatus is very small. A standard tympanomeatal incision is made in the posterior canal skin, and is extended anteriorly to ∼3 o’clock in the right ear, or 9 o’clock in the left ear, to create a flap that is pedicled to the anterior-inferior canal skin (Fig. 9.2). After elevating the flap, the drum is separated from the manubrium of the malleus (Fig. 9.3). This is the key step in gaining anterior exposure. This is done by incising the investing mucosa along the length of the malleus with a sharp pick and peeling the drum epithelium downward, like a stocking, toward the umbo. The fibrous insertion of the drum to the umbo can be incised with a Bellucci scissors—this allows the flap to be reflected forward and downward to gain maximal exposure of the anterior middle ear space. 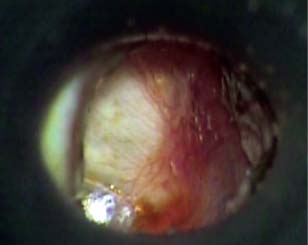 Fig. 9.1 Congenital cholesteatoma: otoscopic view of a white mass in the anterosuperior quadrant of the left ear. 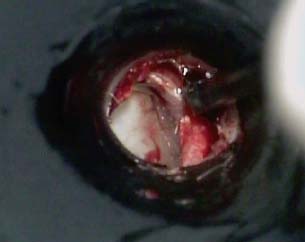 Fig. 9.2 Tympanomeatal incision is extended anteriorly to 9 o’clock (for left ear), creating a flap that will be pedicled anteroinferiorly. 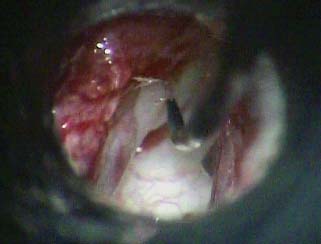 Fig. 9.3 The mucosa is incised along the length of the malleus, and the drum is separated from the malleus working from above downward. The umbo is detached using Bellucci scissors.

This approach should be sufficient to expose the anterior and inferior margins of the cholesteatoma sac (Fig. 9.4A,B). The superior margin may extend upward to the attic and can be exposed by removing the edge of the scutum with a stapes curette. The cholesteatoma is enveloped by a very thin layer of normal mucosa. This mucosal layer is incised along the inferior margin of the sac, and the lesion is freed by blunt dissection using a sweeping motion with a whirlybird (Hough excavator) along the anterior and superior borders, keeping the capsule intact (Fig. 9.5). The lesion is usually attached to the tensor tympani tendon near the processus, and should be separated sharply from the tensor using a Rosen needle. The cholesteatoma can usually be delivered in toto once this is done. 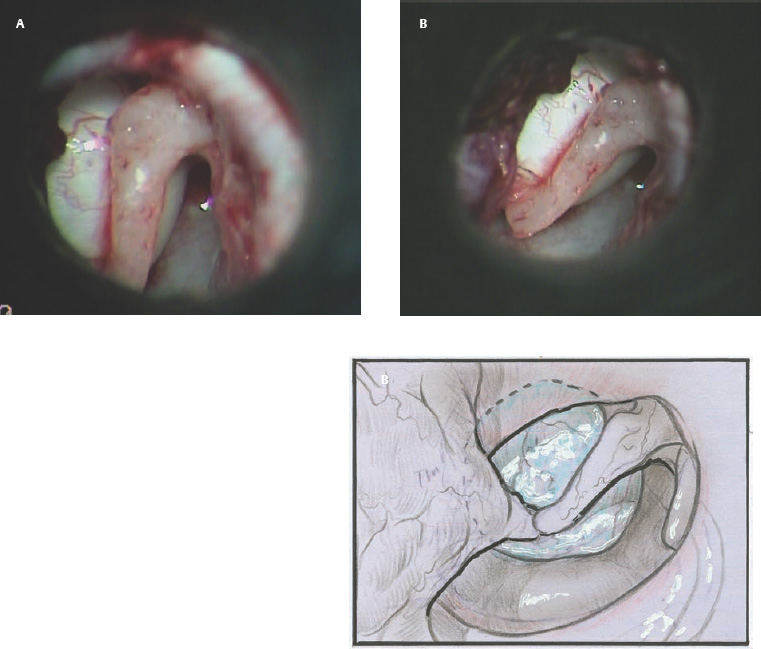 Fig. 9.4 With the extended tympanomeatal flap lifted forward, the entire cholesteatoma can be seen. (A) The anterior and superior, and (B) the interior and posterior extent of the lesion are visualized. 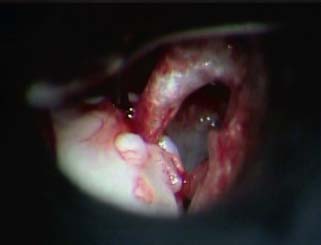 Fig. 9.5 The mucosal envelope is incised, and the lesion is completely mobilized.

Occasionally the lesion cannot be removed without rupturing the sac. If this does occur, the contents (debris) should be carefully evacuated with suction and cup forceps, care being taken not to spill the contents of the lesion into the middle ear, and the capsule should be maintained as completely as possible on the medial (deep) surface. Once the lesion is reduced in size, the capsule can be dissected and the remainder of the sac delivered.

Once the lesion is removed, it is important to inspect the attic and protympanum using a mirror or endoscope to be sure that there is no residual disease (Fig. 9.6A–C). It is also advisable to scrape the anterior surface of the tensor tendon with a sharp pick to be certain that no epithelium is left there. The tympanomeatal flap can be replaced and the external canal packed lightly with Gelfoam (Pfizer, Inc., New York, NY). The ear should heal normally, with normal hearing resulting. 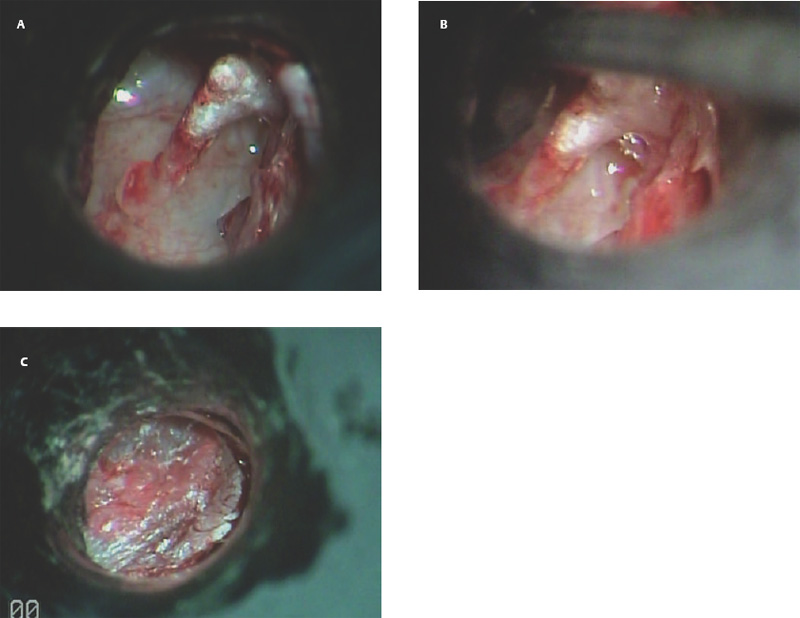 Fig. 9.6 (A,B) The lesion is completely removed. A mirror is used to inspect the tensor tendon, processus, and anterior surface of the malleus to ensure that no epithelium remains. (C) The tympanomeatal flap is returned. 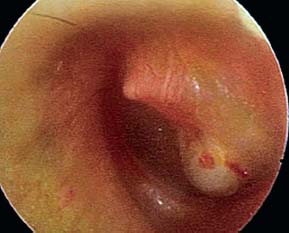 Posteriorly situated cholesteatomas (Fig. 9.7) cannot usually be removed in toto because they usually involve the incus. In this respect they must be handled more like acquired cholesteatomas. After an extended tympanomeatal flap is raised (Fig. 9.8A,B), the posterior and superior bony overhang is removed with a curette, and the extent of the lesion is evaluated (Fig. 9.9A,B). The incus must usually be separated from the stapes and removed if it is enveloped by the disease (Fig. 9.10A,B). If there is considerable superior extension to the epitympanum (Fig. 9.11), a transcanal atticotomy can be performed, removing the scutum with a curette until the posterosuperior margin is identified. The sac is dissected from the medial attic wall toward the middle ear and delivered (Figs. 9.11 and 9.12). Primary ossicular reconstruction can be undertaken, as shown here, or delayed until a second stage (Fig. 9.13). 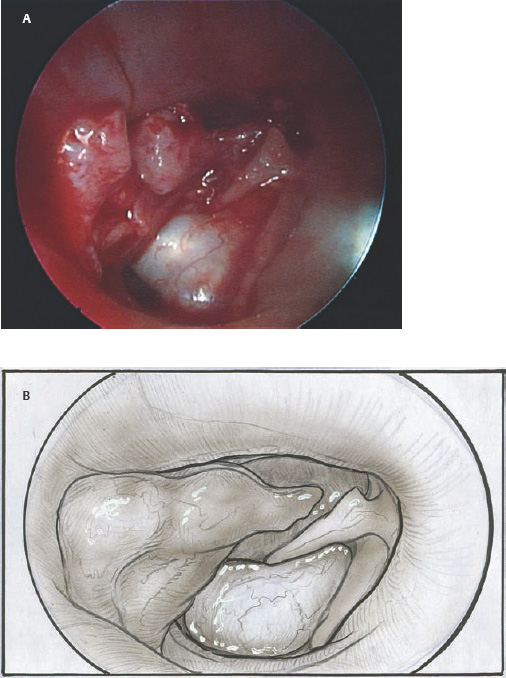 Fig. 9.8 (A,B) Extended tympanomeatal flap. The incision is carried toward 9 o’clock (3 o’clock for a right ear), and the drum is separated from the malleus, allowing anterior exposure. 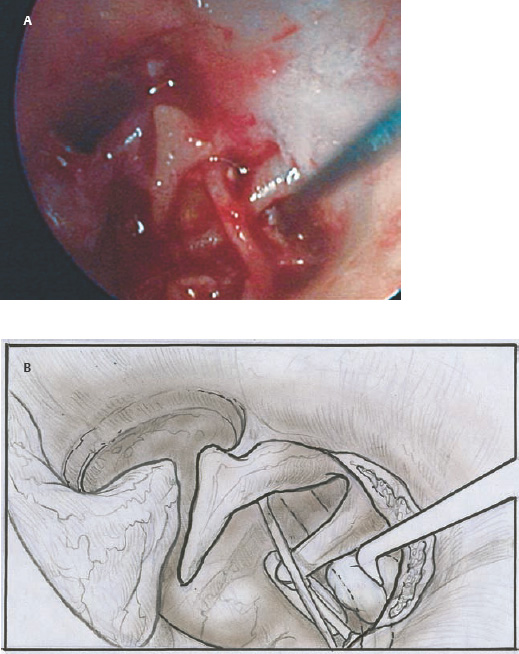 Fig. 9.9 (A,B) After curetting the posterosuperior bony overhang, the posterior aspect of the sac can be dissected forward. The sac travels medial to the incus. 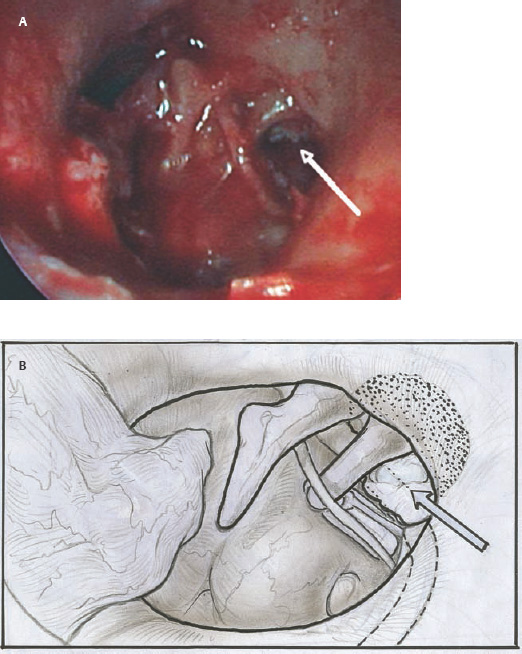 Fig. 9.10 (A,B) The disease extends to the epitympanum (arrow). The incus will have to be removed, as well as part of the scutum, to gain adequate exposure. 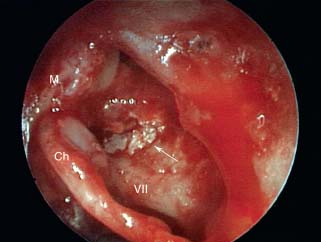 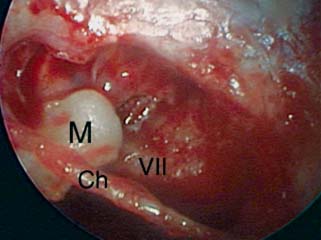 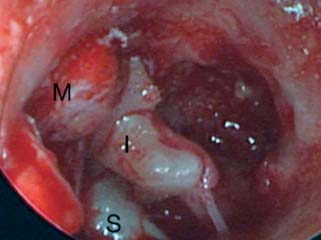 Fig. 9.13 Ossicular reconstruction using a sculpted incus (I) interposed between the malleus (M) and stapes (S).

Large congenital cholesteatomas are handled in the same way as large acquired cholesteatomas. A canal wall up mastoidectomy is created to assess the posterior extent of the disease. A transcanal atticotomy is performed to remove the disease from the epitympanum, and a facial recess opening to dissect the sac from the posterior mesotympanum (Fig. 9.14). If the exposure is still restricted, a decision can be made intraoperatively to convert this to a canal wall down mastoidectomy. 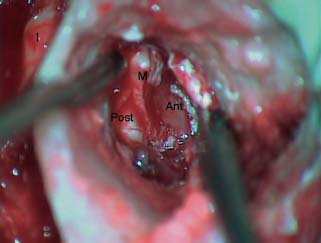