Cavernous hemangioma of the retina is a rare vascular hamartoma. The tumor is composed of clumps of dark intraretinal aneurysms that demonstrate a characteristic “cluster-of-grapes” appearance. It is usually unilateral and rarely increases in size. The hemangioma is almost always asymptomatic, although mild visual disturbance as a result of macular involvement or vitreous hemorrhage has been reported occasionally. Patients with this hamartoma may also have hemangiomas involving the skin and central nervous system. Several pedigrees with varying manifestations of the retinal and systemic characteristics have been reported consistent with an autosomal dominant pattern of inheritance.

Retinal cavernous hemangiomas are composed of clusters of saccular aneurysms filled with dark blood. There is no intervening retinal tissue between the aneurysms. The aneurysms range in size from microaneurysms to a half-disc diameter.1 The typical tumor is isolated, one to two disc diameters in size, and resembles an intraretinal cluster of grapes (Fig. 129.1, see also Fig. 129.3).2,3 However, the clinical appearance can be quite variable; ranging from a single aneurysm to a wide distribution over the entire fundus or following the course of a major vein (see Fig. 129.5). Commonly, layering of the red blood cells within the aneurysms causes a plasma–erythrocytic separation that has been called a “pseudohypopyon.” Often a white or gray fibroglial membrane covers the surface of the tumor (see Fig. 129.5A). The adjacent retinal blood vessels appear unaffected by the tumor, with no evidence of feeder vessels. Although a mild lipid exudate has been reported adjacent to the hemangioma in one case,4 exudation from the tumor is extremely rare either at presentation or with long-term follow-up. The slow circulation through the aneurysms is responsible for the lack of exudation of lipid or fluid. 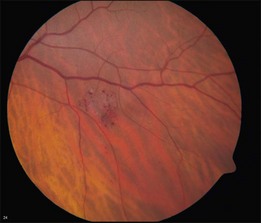 Fig. 129.1 Cavernous hemangioma of the retina. Note the layering of blood within the large aneurysm. Visual acuity is 20/20, and the patient is asymptomatic.

Fig. 129.2 (A) Patient with a combined preretinal, intraretinal, and subretinal hemorrhage. (B) When the blood cleared, a typical cavernous hemangioma of the retina could be seen.

Cavernous hemangiomas have also been reported to be located on the optic nerve head.8–10 These tumors have a clinical appearance similar to the retinal lesions (Fig. 129.3). An enlarged blind spot may be demonstrated on the visual field, but visual acuity is normal. Gündüz et al.11 described a patient with a cavernous hemangioma in the superonasal quadrant of the fundus and unilateral decreased visual acuity, with associated red–green color defect. Cone response and 30 Hz flicker responses were nearly absent. 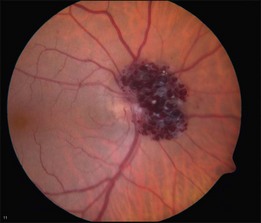 Racemose hemangioma (Wyburn Mason syndrome) is another retinal vascular anomaly where dilation of the larger retinal vessels with direct arteriovenous anastomosis is seen, and this lesion should not be confused with cavernous hemangioma.

Fluorescein angiography may show autofluorescence of the gray-white epiretinal membrane overlying the tumor. The aneurysms will fill slowly and often incompletely up to 30 minutes after dye injection. Dye will rarely extravasate from the tumor in the late phase of the angiogram. In addition, the plasma–erythrocytic separation often seen on clinical examination is dramatically demonstrated in the later phases of the angiogram. The fluorescein collects in the superior portion of the aneurysm, with the gravitated blood cells blocking its accumulation in the inferior area (Figs 129.4 and 129.5B).

Fig. 129.4 Fluorescein angiography of cavernous hemangioma of the retina. (A) Slow and often incomplete filling of the aneurysms. (B) Plasma–erythrocytic separation in the late phases.

Fig. 129.5 (A) Involvement of the veins in addition to the capillaries. (B) Note extensive empty shells of the cavernomas in the vicinity of the veins that do not fill with fluorescein.

Although performing echography is rarely necessary, the ultrasonographic features have been described by Shields3 in cases in which diagnosis was rendered difficult by vitreous hemorrhage. A-scan shows a high initial spike and high internal reflectivity. B-scan shows an irregular surface, large internal acoustic density, and absence of choroidal excavation. Many cavernous hemangiomas are too small to exhibit a characteristic echographic pattern.

Growth of a retinal cavernous hemangioma is exceedingly rare. Klein et al.4 reported the only case of enlargement, and this developed after photocoagulation. Messmer et al.1 noted enlargement of the fibroglial component, which may represent progressive thrombosis of some of the aneurysms. In a later report, Kushner et al.14 monitored two patients over 5–10 years and reported definitive growth.

Visual loss can occur from growth of an associated epiretinal membrane. In addition, macular pucker has been reported separate from the membrane overlying the hemangioma; the membrane and the tumor in this case were probably unrelated.1 Vitreoretinal or vitreopapillary traction may occur occasionally.15