Three genetic forms of retinoblastoma. The vast majority of familial and sporadic heritable retinoblastomas are bilateral. However, 10–15 % are unilateral. Arrow indicates the index child or proband, with the indicated form of retinoblastoma. Males are indicated as squares and females as circles. A horizontal line connects the mother and father and a vertical line connects parents and offspring. The sex of the affected individuals is shown, although it is not relevant. Changing the sex of each affected individual would not change the accuracy of this figure

The remaining 60 % of retinoblastoma patients have nonheritable disease. Their retinoblastoma develops as the result of two somatic RB1 mutations that occur in a single cell sometime after conception.

Variation in incidence among countries, regions, and ethnic groups or over time can provide clues to etiology. Environmental (defined here as nongenetic) factors are implicated in cancers that show great variation in incidence.
The rates of retinoblastoma vary about 50-fold across the continents [9], a degree of variability higher than that for several adult cancers, namely, stomach, colon, cervical and pancreatic cancer, and lower than that for lung and esophageal cancer, among others. Incidence in North America and in much of Europe is relatively uniform, somewhat higher in Central and South America, and varies more widely in Asia and Africa [9]. Overall, the rates are higher in less industrialized countries than in more industrialized countries. In addition, there are enormous variations within some countries. The data suggest variation by economic development, with higher rates in poorer regions of countries such as Brazil and Mexico [10]. Clearly the differences in the incidence rates of retinoblastoma between regions of higher and lower incidences may be due to other factors such as ethnic origin, genetic susceptibilities, and cultural and behavioral practices. A closer examination of the differences in incidence may identify specific risk factors for development of retinoblastoma.

The incidence of retinoblastoma in the United States has not changed significantly from 1975 to 1995 [11]. The rates by race/ethnicity and region generally range from 10 to 14 per million children ages 0–4 per year (Fig. 4.2). Incidence rates were generally higher for African-Americans than for their white neighbors [9]. For African-Americans in Los Angeles, the incidence was lower and for native Hawaiians, incidence was higher, but these rates are based on small numbers of affected children and therefore are imprecise [9]. 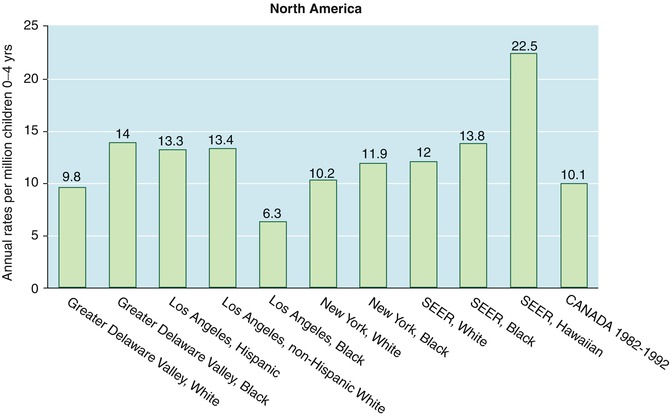 Within Europe, there is some variability in incidence (data not shown). Most countries have incidences in the range of 6–12 per million per year in children ages 0–4. However, there are a few notable exceptions. Bulgaria has a very low incidence (3.4 per million per year), while the province of Valencia in Spain (but not other regions in Spain) has the highest incidence for all of Europe, followed by Norway, Denmark, and Scotland (but not England and Wales) [9]. Although many of the registries have small numbers of cases, these differences within Europe are intriguing and do not appear to follow an easily discernible pattern.

Population-based registries do not exist for all countries in Central and South America, and for some countries, rates are only available within select cities (Fig. 4.3). However, even with these limitations, there appear to be two groups in Central and South America, those regions with incidence under 9.5 per million per year in children ages 0–4 and those with an incidence greater than 15 per million per year [9]. 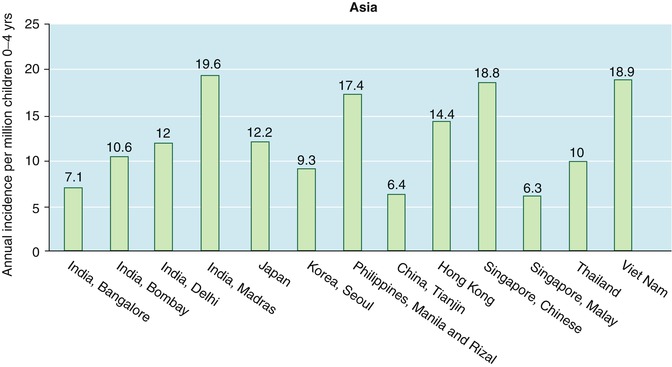 In Africa, where there are few population-based registries, incidence is also quite variable (Fig. 4.5) [9]. Incidence in sub-Saharan Africa is much higher than in Northern Africa. In the Middle East (including Israel) and North Africa, incidence is low and fairly uniform, ranging from 1.4 to 5.2 per million per year in children ages 0–4. However, even within the higher rates of sub-Saharan Africa, there is wide variability with the highest rates in West Africa and generally lower rates in the central and southern regions of the continent. It is noteworthy that the highest rate worldwide is in Bamako, Mali, one of the least economically developed urban centers in Africa. 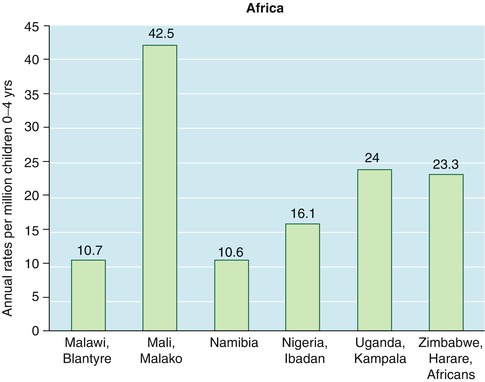 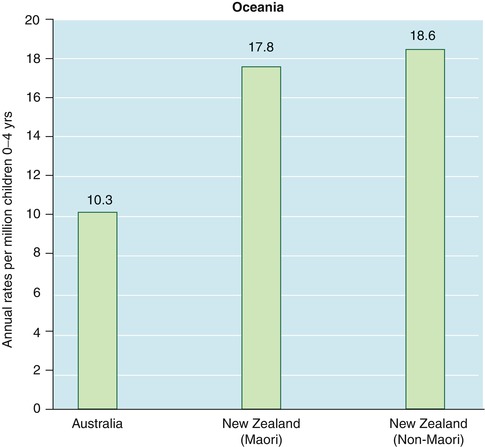 Males and females in most countries of the world have similar incidence rates (Figs. 4.7 and 4.8). Interestingly, in almost every Central and South American country, girls have an elevated incidence when compared to their male counterparts [9]. 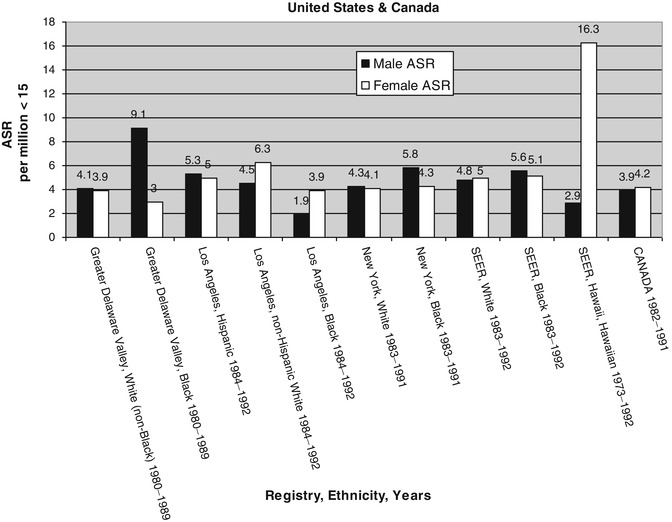 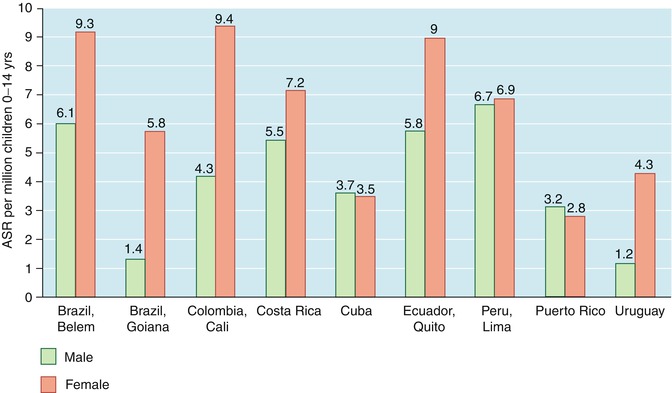 To summarize the extent of variation, it is useful to consider the areas with the highest incidence worldwide [9]. The highest incidence of retinoblastoma is noted in Mali (Bamako), followed by (in descending order) Uganda (Kampala), Zimbabwe (African ancestry), Hawaii (native Hawaiians), India (Madras), Vietnam (Hanoi), the Chinese population of Singapore, New Zealand (essentially equal rates among non-Maoris and Maoris), Spain (Valencia), the Philippines, Colombia (Cali), Ecuador (Quito), Nigeria (Ibadan), Costa Rica, Peru (Lima), Norway, Brazil (Belem), and Denmark (Table 4.1). All of these populations have annual incidences above 15 cases per million children ages 0–4 years. Some global differences are particularly intriguing or paradoxical, given expected similarities in ethnicity and presumed shared environmental exposures: for example, Australia and New Zealand have very different rates which cannot be explained by ethnic differences (Fig. 4.6); one province in Spain has rates much higher than the rest of Europe, higher even than Spain’s former colonies (i.e., the Philippines, Latin America), many of whom also have high rates; some Scandinavian countries (but not Sweden) have rates equivalent to those of Northern Brazil (where a large proportion of the population is of African not European ancestry); and the Chinese in Singapore have a much higher rate than Malays in Singapore or Chinese in China or Hong Kong. There is no clear pattern, but there is a suggestion that environmental factors may play a role, though genetic susceptibility to particular environmental and behavioral risk factors may explain some of the differences.

Regions with the high incidence of retinoblastoma

Sporadic heritable retinoblastoma results from a new germ line mutation that is of paternal origin in over 90 % of patients [12, 13]. By virtue of being a new germ line mutation, the mutation occurs before the child’s conception. Based on these two facts, it seems logical that the search for genetic and nongenetic risk factors for sporadic heritable retinoblastoma should focus on the father’s genes and his exposures before the child’s conception [14]. However, associations with mother’s exposures have been observed as well. Although these associations may turn out not to be real, our understanding of retinoblastoma genetics and etiology is still evolving and we should not dismiss the possibility of effects of maternal exposure. It would be reasonable to hypothesize preconception exposure to mutagens, variants of metabolizing genes that prolong the duration or increase the level of a mutagen in the body and variants of DNA repair genes that result in less efficient repair of DNA damage as possible risk factors.
< div class='tao-gold-member'>
Only gold members can continue reading. Log In or Register to continue