Petrositis and Osteomyelitis of the Temporal Bone

11 Petrositis and Osteomyelitis of the Temporal Bone

Diffuse osteitis of the temporal bone, also known as petrositis, practically vanished from the list of complications of otitis media many years ago in central Europe. Very exceptionally, circumscribed osteitis of the petrous apex or of the subarcuate tract may persist after inadequately treated chronic otitis media.

However, the more dangerous version of this condition, with a marked osteomyelitic component, still occurs, presenting surgical challenges. It is not caused by mucoperiostitis of the middle ear, but is ascribed to a specific, aggressive form of external otitis.

Starting with circumscribed dermatitis of the external auditory canal, “malignant external otitis” (Chandler 1968) soon penetrates the periosteum and underlying bone, spreading by both osteitic erosion and osteomyelitic proliferation through the Haversian canals into the tympanic and mastoid bones, and from there into the adjacent skull base. Meltzer and Kelemen (1959) were the first to describe the morphology of this type of osteomyelitis, which came to represent a specific clinical entity, coinciding almost exclusively with diabetes mellitus and Pseudomonas infection. It has therefore also been termed “Pseudomonas osteomyelitis of the temporal bone” (Nadol 1980). The adjective “malignant” is used for the condition due to the high mortality rate associated with it, which results mainly from concomitant paralysis of the lower cranial nerves and phlebitic occlusion of the jugular bulb or the cavernous sinus. The invasion of the skull base can cross over to the contralateral side, and may extend into the subcranial soft tissues. Davis et al. (1992) distinguished between three stages (Table 11.1).

The typical form of malignant external otitis is not confined to elderly patients or diabetics. In a review of 33 patients seen at our own hospital between 1978 and 1997 (Pfretzschner 1998), the median age was 64.7 years, but the ages ranged from 16 years to 86; 24 patients were male and nine were female. Twenty-two were suffering from diabetes mellitus, but 11 had no diabetes. Chandler et al. (1986) postulated that Pseudomonas aeruginosa is the organism responsible for malignant external otitis. In our own series of 33 typical cases of malignant external otitis, Pseudomonas aeruginosa was present in 39% as a single infectious organism and in 39% as a mixed infection; but 22% of the ears had mixed infections without Pseudomonas.

The presenting symptoms of malignant external otitis are listed in Table 11.2 in the order of their frequency of occurrence in our own series of 33 cases. Constant pain is the cardinal complaint, focused on the ear and ipsilateral skull, followed by, or often accompanied by, discharge from the external auditory meatus that is resistant to local treatment. Swallowing disorders, mostly in combination with neck pain, follow. Deafness and giddiness with vertigo were experienced by only about 30% of the patients. Facial paralysis had been the alarm symptom in 27%. Mandibular pain or trismus, or both, represented 15%, abducent nerve palsy was seen in 6%, and amblyopia occurred in 3%. Only three patients had a bilateral condition at their first examination or later. A few more had experienced remission after otological treatment, but suffered one to three severe recurrences. No explanation for the initiation of the specific malignant external otitis syndrome was provided in any of the cases by previous occurrence of other forms of ear disease or trauma.

Otoscopy usually reveals an eczematized meatal entrance with crusts, and an ulcerated floor of the external auditory canal (Fig. 11.1). Granulations in the swollen skin may raise a suspicion of neoplasia, and any palpation or curettage causes pain. The drum membrane may look normal, but it can be altered by granulating myringitis. Pressure on the mastoid, mandibular joint, or zygoma is often painful. A thorough neurological examination helps assess paresis of the cranial nerves, and recognizing such deficits helps provide an overview of the extent of the skull base affected.

Pathological findings should lead to a systematic check-up including the following steps: 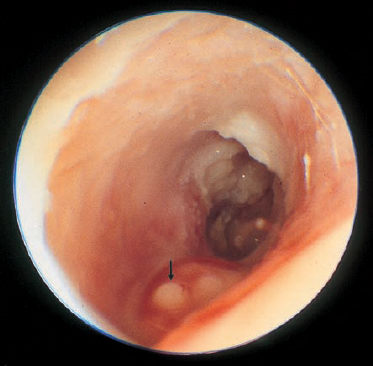 Fig. 11.1 External otitis of the meatal floor, with ulceration (arrow). The right ear of a 68-year-old patient with diabetes and prostate gland carcinoma, showing the initial state of petrous bone osteomyelitis. The myringitic tympanic membrane can be seen at the rear. See also Figure 8.7, p. 117. 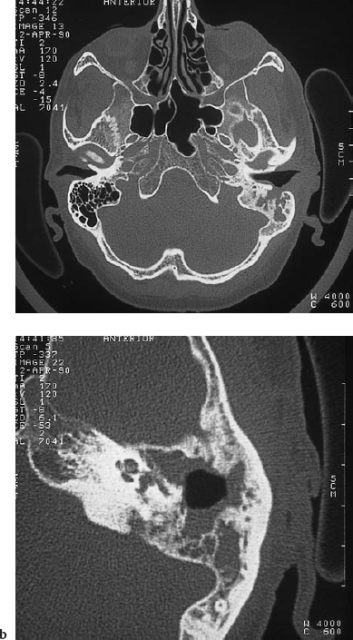 Fig. 11.2 Computed tomograms demonstrating osteomyelitis of the right temporal bone after stapedectomy. a Large lacunas of osteitic bone destruction can be seen in the right petrous bone. b Massive bone destruction around a central cavity after incomplete external mastoidectomy. 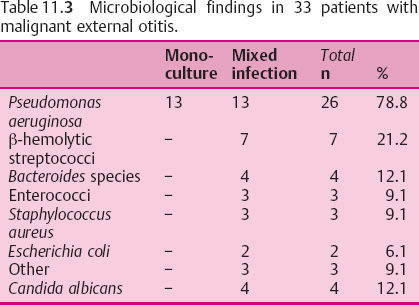 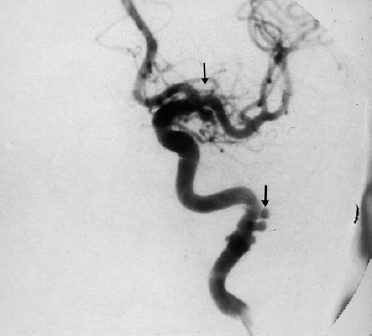 Tags: Restitutional Surgery of the Ear and Temporal Bone
Jun 14, 2016 | Posted by admin in OTOLARYNGOLOGY | Comments Off on Petrositis and Osteomyelitis of the Temporal Bone
Premium Wordpress Themes by UFO Themes
WordPress theme by UFO themes