Penetrating and Blunt Trauma to the Neck

CHAPTER 115 Penetrating and Blunt Trauma to the Neck

• With penetrating neck trauma, emergent surgical exploration is necessary for any immediate life-threatening signs or symptoms (expanding hematoma, nonexpanding hematoma in the presence of hemodynamic instability, hemomediastinum, hemothorax, hypovolemic shock).
• For the stable patient, the choice of treatment for penetrating neck trauma remains controversial. Classifying the neck zone involvement (zone I, II, or III), mechanism of injury, and velocity of the projectile are helpful in determining the risk of major injury. Zone I and zone III injuries usually require arteriography on all stable patients. Because hemorrhage is the leading cause of death for penetrating neck injuries, hemodynamic and neurologic status should always be monitored closely for at least 48 to 72 hours.
• In blunt neck trauma, symptoms can present with a delayed onset and be easily underdiagnosed. Thus careful observation should be made for individuals with significant blunt neck trauma in order to monitor for progressive signs and symptoms of injury.

As the incidence of violent trauma rises in our society, the rate of penetrating trauma to the head and neck also grows. Presently, penetrating neck injury comprises 5% to 10% of all trauma cases. All penetrating neck wounds are potentially dangerous and require emergency treatment.

In the neck, multiple vital structures are vulnerable to injury in a small anatomic area and are not protected by bone. Such vital structures of the neck can be divided into four groups: the air passages (trachea, larynx, pharynx, lung); vascular (carotid, jugular, subclavian, innominate, aortic arch vessels); gastrointestinal (pharynx, esophagus); and neurologic (spinal cord, brachial plexus, peripheral nerves, cranial nerves [CNs]). Signs or symptoms listed in Box 115-1 should alert the otolaryngologist that injury to any of these structures has occurred.

Knowledge of the physical properties and ballistics of the penetrating object can help determine a management plan and predict the risk of injury. The location of penetration also predicts risk and helps in planning for management.1 The magnitude of injury is determined by the kinetic energy that is transferred from the projectile to the target tissue: KE =

Civilian handgun injuries are traditionally from projectiles with low-muzzle velocity (90 meters per second [m/s]). An impact velocity of 50 m/s penetrates skin, and an impact velocity of 65 m/s will fracture bone. These slow-velocity projectiles have been known to push aside vital structures such as arteries. Penetrating wounds caused by small-caliber handguns have a less damaging effect than other projectiles of higher velocity.

Guns are classified by projectile type, speed, and caliber (diameter of muzzle bore). Bullets that travel greater than 610 m/s are considered high-velocity projectiles. Handguns or pistols (.22 caliber to .45 caliber) have muzzle velocities from 210 to 600 m/s. Caliber is a term interchangeable with the designation of the cartridge (i.e., .22-caliber pistol). Handguns can develop up to 1000-foot pounds of energy. A .44-caliber magnum, which has a large powder charge, can create even more hypervelocity. Thus injury from this gun can cause tissue destruction comparable with that caused by a rifle bullet, a larger projectile.

The yaw of the bullet describes the deflection of the projectile around the axis of travel. If the yaw is minimal (not tumbling), with the bullet entering perpendicular to the body surface, the bullet will pass through the tissues with little energy transmitted. A tumbling bullet causes injury in a wider path. The projectile can follow tissue planes and may not injure vital structures. A bullet also can deflect from bones of the mandible or cervical spine. Unfortunately, civilian gunshot wounds increasingly involve heavier projectiles with higher-velocity handguns. In all cases a full inspection of the entire naked body and palpation of the head is necessary to reveal all entrance and exit wounds. This information may be useful in predicting damage.

Low-velocity bullets are usually lead shielded and often leave a radiographic track. A diagnosis based on physical signs of injury, after full and careful organ system evaluation, is often sufficient for these injuries if all presentations are normal. Radiographic confirmation or surgical exploration should follow any uncertainty or deterioration of physical signs.

Most military rifles have a jacket of strong metal, usually copper, that surrounds a lead projectile. This permits smoother and longer flight because of less drag and less aerodynamic compression. Similarly, because of the lack of deformation, these military bullets create a clean hole with a through-and-through wound without a lead track to follow. The M16 military rifle has a bullet that is designed to tumble, and therefore it causes more tissue injury. It is against the terms of the Hague Convention of 1908 for military projectiles to include expanding bullets such as hollowpoint, softnose, or dumdum bullets. These soft-tip bullets expand on contact and cause greater soft-tissue injury. They create a large wound cavity, may not cause an exit wound, and may fragment, with partial projectiles causing injury far from the primary direct path. Hunting rifles use these expanding bullets, and therefore the civilian wounds caused by these projectiles can be more devastating than a comparable wound inflicted by a military weapon.

Most military rifles have a muzzle velocity of 760 m/s. High-velocity missiles (>610 m/s) not only tear tissue but transmit energy to surrounding tissue. A cavity of up to 30 times the size of the missile may be created and pulsate over 5 to 10 ms, with several waves of contraction and expansion of the tissue (Fig. 115-1).2 This may explain the finding of a punctured viscus without direct penetration and should alert the surgeon to examine the trachea and esophagus, even when a bullet wound is 2 inches away (Fig. 115-2). 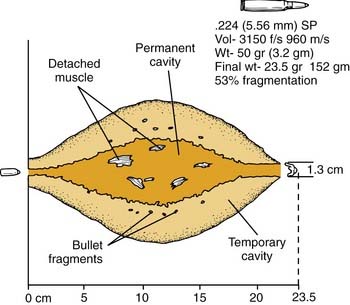 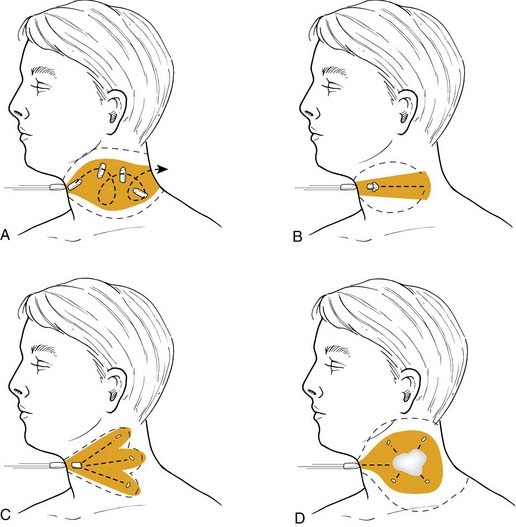 High-energy missiles are not easily deflected and cause significant destruction along their path because the energy is absorbed by the surrounding tissue. Deer rifles fire a projectile designed to mushroom on impact, causing a large amount of tissue destruction within a small area.

The mortality from all high-velocity rifle injuries inflicted directly on the neck is significant. These patients usually do not survive and are not available for study. In view of the expected severity of injury, all known victims of high-velocity rifle injuries who survive on reaching the hospital merit strong consideration for surgical exploration. For stable patients, angiograms should be considered before surgery. In helping to determine if mandatory surgical exploration or further preoperative diagnostic tests are necessary, knowledge of the size and velocity of the intruding missile is helpful.

The severity of shotgun wounds is largely dependent on the distance between the weapon and the victim, the type of weapon used, and the size of the projectile (shot). Pellets tend to scatter as they travel on the basis of the distance to impact and the interior muzzle diameter (choke) of the shotgun. At close range the entire charge can act like a single missile with a KE similar to a high-velocity bullet.3 At further distances, birdshot pellets scatter and act as multiple individual missiles. With larger pellets such as buckshot, significant injuries can occur from individual pellets up to 150 yards away with a standard-length barrel. A sawed-off shotgun leads to early spraying of the shot. Shotguns are low-velocity weapons (muzzle velocity of 300 m/s).

Birdshots are pellets with a diameter less than or equal to 3.5 mm (0.13 inch) and are categorized as No. 4 shot or smaller. Buckshots have a diameter greater than 3.5 mm and have a greater range, causing significant injury up to 150 meters. This is in contrast to birdshots, which have a 12-m maximum range of serious injury (Tables 115-1 and 115-2). Each pellet injury from a buckshot blast is similar to a bullet injury from a handgun. Buckshot wounds are usually more serious than handgun bullet wounds because of the number of missiles involved. 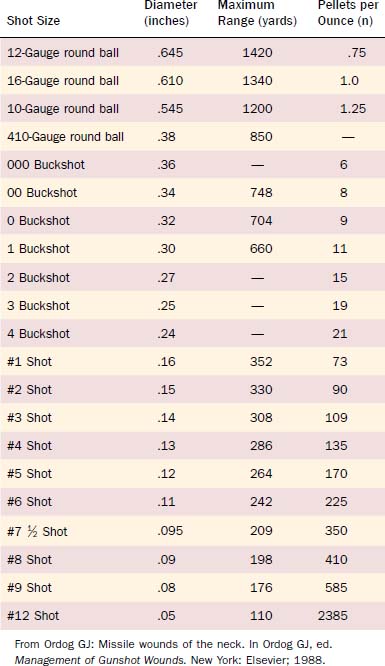 At close range, shotgun injuries cause as much damage as rifle injuries because of the massive blast effect to the tissues. When the distance between the shooter and the recipient is more than 6 m, the details of gauge, shot, powder load, and the choke of the gun become more important. Wadding from the shotgun blast also should be searched for and removed from the wound to prevent infection. Radiography is useful for revealing pellets in unexpected locations such as the intracranial, intrathoracic, or intraorbital cavities. Magnetic resonance imaging (MRI) may be even more valuable than computed tomography (CT) for the stable patient because metal scatter artifact does not occur.

Knife, ice-pick, cut-glass, or razor-blade injuries usually proceed along more predictable pathways. However, what appears to be a single-entry wound may be from multiple stab wounds. The history of the attack may be of some help to the physician in determining whether the blow was overhand or underhand, whether both the attacker and the recipient were standing, and other similar details. Compared with gunshot wounds to the neck, cervical stab wounds have a higher incidence of subclavian vessel laceration.4 This is because stabbings to the neck often occur in a downward direction with the knife slipping over the clavicle and into the subclavian vessels.5 In gunshot wounds the direction of the projectile is more perpendicular to the neck; thus the clavicle can protect the subclavian vessels. In regard to spinal injuries, neck stab wounds have a lower incidence than cervical bullet wounds.5

Penetrating neck injuries should be differentiated into two basic presentations depending on whether or not they are immediately life threatening. The signs of immediate life-threatening injuries include massive bleeding, expanding hematoma, nonexpanding hematoma in the presence of hemodynamic instability, hemomediastinum, hemothorax, and hypovolemic shock. In all of these instances, immediate surgical exploration is mandatory. On the other hand, hemodynamically stable patients who present with non–life-threatening features can undergo thorough imaging investigations to determine the extent of injury.

For the stable patient, the choice of management remains controversial: either mandatory exploration for all penetrating neck wounds or selective exploration with observation. Retrospective studies have supported both mandatory surgical exploration and selective surgical exploration.6,7 For the selective surgical approach, it is emphasized that the clinical status of the patient should be monitored closely by frequent observation and medical examination using diagnostic radiology and surgical endoscopy. In civilian injury this is often possible, but in times of war or civilian catastrophe, resources such as radiography and observation beds may not be available for large numbers of casualties.

Until World War II, the mortality of penetrating neck wounds ranged from 7% to 15%. By the end of the Vietnam War, it was reduced to 3% to 6% (Table 115-3).7 However, mortality remains high if major vascular structures (carotid or subclavian arteries) or the cervical spinal cord is injured. During the Vietnam War, it was customary to explore all patients with penetrating neck wounds below the platysma layer under general anesthesia, regardless of preoperative findings. The idea of mandatory exploration was also advocated by Fogelman and Steward in 1956 for civilian injuries. This philosophy was followed until the mid-1980s by most general trauma centers in large cities in the United States. However, it was realized that in many instances significant injuries to major structures did not occur. This reasoning led some surgeons to follow a more selective approach for these injuries. However, advocates for mandatory exploration believe that exploration has time-proven success. Each of the proponents gives arguments that support their views, both medically and economically (Table 115-4).


Only gold members can continue reading. Log In or Register to continue