The evolution of mastoidectomy has been a defining aspect of the development of modern otologic practice (see the historic review in Chapter 33). However, for a procedure that is often referred to as the most fundamental otologic surgical skill, there is surprisingly little clarity regarding how and when mastoidectomy should be applied in the chronic ear. The following roundtable chapters on mastoidectomy will outline the surgical steps involved with canal wall-up (also referred to in the field as intact-canal wall) and canal wall-down mastoidectomy techniques; additionally, there is a chapter on epitympanectomy that is quite relevant to this discussion as some surgeons perform epitympanectomy combined with or in lieu of other mastoidectomy approaches. It should also be noted that hybrid tympanomastoid surgical techniques (Part 7), which combine aspects of canal wall-up and canal wall-down surgery, are also relevant to this discussion; however, before considering these specific surgical techniques, the reader is urged to review this introductory discussion in which various historical indications for mastoidectomy are reviewed.

Because the middle ear cleft anatomically communicates with the mastoid air cell system, many cases of chronic suppurative otitis media are considered to be part of a spectrum of chronic oto-mastoiditis. Histopathology seems to support this general concept in that diseased mucosa, osteitis, and micro-abscess formation can be commonly observed in archived temporal bone specimens severely affected by chronic ear disease. Post-obstructive phenomena, such as cholesterol granuloma and air cell effusion, are regularly encountered as well. From a radiologic perspective, severely diseased chronic ears frequently demonstrate evidence of diffuse mastoid air cell opacification and indicators of mastoiditis, even when an ear has been made dry and temporarily stable from a clinical standpoint.

Given these associations, it has been standard practice for many otologic surgeons to perform mastoidectomy as a routine part of surgery intended to eliminate chronic tympanomastoid infection, typically alongside tympanic membrane repair. In fact, failure to thoroughly address mastoid air cell disease has been frequently asserted as a reason for surgical failure in both canal wall-up and canal wall-down scenarios. Some surgeons have even endeavored to identify particular air cell tracts that are most commonly associated with mastoidectomy failure, and many experienced otologists anecdotally recall cases where persistent mastoiditis seemed to have contributed to past surgical failure.1,​2

Expert opinion and surgical tradition notwithstanding, a critical review of the literature does not appear to support the therapeutic role of mastoidectomy in chronic suppurative otitis media. In 2012, Albu et al. reported results of the only existing statistically powered prospective randomized trial comparing Type I tympanoplasty alone to tympanoplasty with canal wall-up mastoidectomy for ears with non-cholesteatoma chronic suppurative otitis media.3 In this study, 282 ears that had been actively draining within 6 months prior to surgery were followed for 12 months. No statistically significant benefit was noted from the addition of mastoidectomy with respect to successful tympanic membrane repair or improvement of hearing. Of note, the two treatment arms in this study had been equally stratified according to the Middle Ear Risk Index (MERI), and they were equally matched in terms of perforation size, perforation location, preoperative hearing, age, and gender. In addition to this, in 2013 Eliades and Limb reported results of an exhaustive review and analysis of the existing literature pertaining to therapeutic mastoidectomy in chronic suppurative otitis media, which included 26 articles.4 Following analysis of this data, they concluded “the available literature shows no additional benefit to performing mastoidectomy with tympanoplasty for uncomplicated tympanic membrane perforations.”

Given these findings, it seems most likely that therapeutic mastoidectomy is perhaps useful only in select complicated cases, while the majority of ears appear capable of responding to closure of the middle ear space via tympanoplasty in combination with culture-directed systemic and/or oto-topical antibiotics. Situations where mastoidectomy may yet be possibly beneficial include refractory infection with antimicrobial-resistant pathogens, past surgical failures with radiologic evidence of extensive mastoid disease, or cases that involve an infectious complication, although there is insufficient evidence available to make strong recommendations for any of these indications.

The physiologic role of the mastoid and its air cell system in regulation of tympanomastoid gas pressure is not well understood. Contradictory opinions exist in the literature, with some advocating a vital role of healthy mucosa of the mastoid and epitympanum in maintaining postoperative tympanic gas homeostasis and others suggesting that mucosal gas absorption in these areas is partially responsible for recurrent tympanic membrane retraction and cholesteatoma.5,​6,​7,​8 In addition to the uncertain role of the mucosa, surgeons have for many years proposed canal wall-up mastoidectomy (with or without posterior tympanotomy) as a means of counteracting negative middle ear pressure. The theory behind this is that by expanding the volume of the tympanomastoid compartment via mastoidectomy, according to Boyle’s Law, an effectual “volumetric pressure buffer” can be created that will help resist the acquisition of negative middle ear pressure.9 This concept has been particularly championed in diseased ears having an underlying hypocellular and sclerotic mastoid, as these may be particularly prone towards selective epitympanic and mastoid dysventilation due to bottlenecked narrowing of the epitympanic diaphragm and aditus ad antrum.

Although the creation of a volumetric pressure buffer is an intellectually satisfying concept, evidence to support therapeutic mastoidectomy for this indication is also lacking to a degree, similar to what has been outlined above for chronic oto-mastoiditis. It is unclear whether this lack of evidence is due to an inherently flawed theory regarding the volumetric pressure buffer effect or if other complexities related to the design and execution of properly controlled clinical trials to test this hypothesis are in play. It also should be mentioned that maintaining patency of these surgically augmented communications between the middle ear and mastoid may be problematic as new bone formation and the development of adhesions may generate blockages.

No textbook on chronic ear disease would be complete without some discussion of the classic debate between canal wall-up mastoidectomy versus canal wall-down mastoidectomy. Although the reader will find opinions regarding the relative and controversial indications for these procedures in each chapter in this roundtable discussion on mastoidectomy, a basic decision-making scheme is depicted in ▶ Fig. 32.1, followed by a few of the editor’s general opinions on this controversial topic. 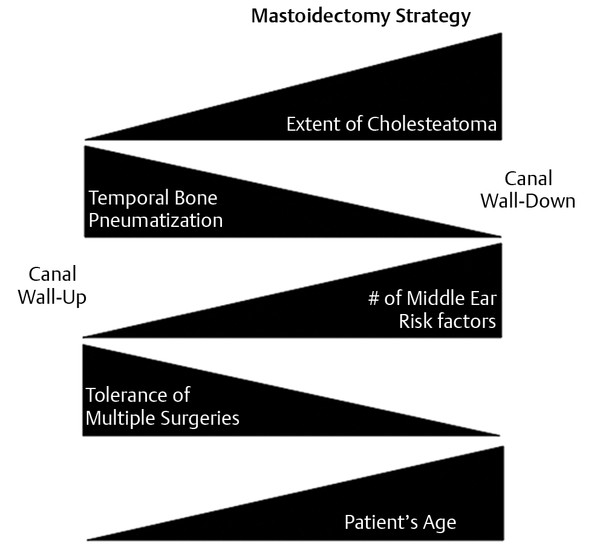