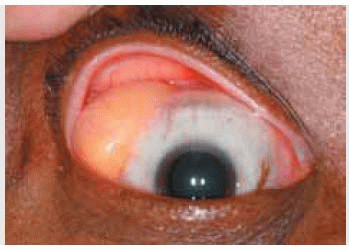 Orbital Fat Prolapse
General Considerations
Weakening of the orbital septum with anterior displacement of orbital fat (“baggy eyelids”) is very common in older individuals. This condition is rarely considered in the differential diagnosis of orbital tumors and is not considered further here. We do discuss, however, a variant that often simulates an orbital or conjunctival neoplasm. This is called orbital fat prolapse.
Orbital fat prolapse is not a true neoplasm, but rather a protrusion of orbital fat through a defect in Tenon’s capsule into the conjunctival fornix (1,2,3,4). It is included here because affected patients are commonly referred with the diagnosis of dermolipoma, lymphoma, or lacrimal gland epithelial tumor. In the authors’ series of 1,264 consecutive space-occupying orbital lesions, the 30 cases of orbital fat prolapse accounted for 47% of lipocytic and myxoid lesions and for 2% of all orbital masses referred to the Oncology Service. However, orbital fat prolapse into the conjunctival fornix is certainly much more common than reflected in that series, which included only more advanced cases that were referred because of suspected tumor. Surprisingly, very little has been published about diagnosis and management of orbital fat prolapse (1,2,3,4).
Clinical Features
Orbital fat prolapse can occur in either gender, but has a predilection for obese elderly men. Clinically, orbital fat prolapse is characterized by a soft yellow mass, almost always in the superotemporal conjunctival fornix and less commonly in the inferotemporal quadrant. Slit-lamp biomicroscopy demonstrates that the lesion is covered by normal conjunctiva and has glistening yellow particles of fat within the mass. Orbital fat prolapse is often confused clinically with dermolipoma, so it is important to emphasize their differences. It occurs in older individuals, is more often bilateral, is more compressible, more elevated, and has visible lipid globules without hair and the anterior border is straight or convex. In contrast, dermolipoma is generally diagnosed in childhood, is more often unilateral, not compressible, sessile in shape, has a gray-pink color, and frequently has fine white hairs on slit-lamp examination; the anterior border is often biconcave, being more parallel to the corneoscleral limbus. Dermolipoma often is associated with Goldenhar syndrome. Conjunctival or orbital lymphoma is also included in the differential diagnosis. If orbital fat prolapse is suspected, it is important to examine the opposite eye because the lesion is often bilateral, although asymmetric.
Diagnostic Approaches
Computed tomography (CT) and magnetic resonance imaging (MRI) show the lesion to be consistent with fat and to be directly continuous with the orbital fat posteriorly. With imaging studies, the prolapsed fat appears hypointense and is continuous with the orbital fat posteriorly.
Pathology
Histopathologically, orbital fat prolapse is composed of normal orbital lipocytes. On occasion, pathologists who are unfamiliar with this entity may make the diagnosis of simple lipoma or pleomorphic lipoma based on the presence of clumps of suspicious cells called florets.
Management
In most instances, orbital fat prolapse can be managed conservatively by periodic observation only. If it attains a large size and produces ocular irritation or is cosmetically unacceptable, then surgical excision is justified. The prolapsed anterior component can be excised by performing a conjunctival incision, exposing most of the fat lobules, clamping the posterior aspect of the lesion with a hemostat, cutting through the clamped fat, and allowing the remainder of the lesion to fall back into the orbit (1,2). Tenon’s fascia and conjunctiva are then closed with running or interrupted absorbable sutures. Recurrence is uncommon if the initial closure is secure.
Selected References
1. Jordan DR, Tse DT. Herniated orbital fat. Can J Ophthalmol 1987;22: 173-177.
2. McNab AA. Subconjunctival fat prolapse. Aust N Z J Ophthalmol. 1999;27: 33-36.
3. Kim YD, Goldberg RA. Orbital fat prolapse and dermolipoma: two distinct entities. Korean J Ophthalmol 1994;8:42-43.
4. Schwarz F, Randall P. Conjunctival incision for herniated orbital fat. Ophthalmic Surg 1980;11:276-279.

Orbital Fat Prolapse
In most instances, orbital fat prolapse is bilateral and fairly symmetric. This bilaterality helps to differentiate it from most neoplasms, which are generally unilateral. Orbitoconjunctival lymphoma can also be bilateral, but it is rarely symmetric and it has a pink, rather than yellow, color.


Orbital/Conjunctival Dermolip
General Considerations
Dermolipoma (lipodermoid) is a choristoma that often affects the orbit and conjunctiva (1,2,3,4,5,6,7,8,9,10,11,12,13,14). It is also discussed in the section on conjunctival tumors. Dermolipoma is a congenital lesion that is often not detected until adulthood; it may even remain undetected throughout life. In the authors’ series of 1,264 consecutive space occupying orbital lesions, the 31 dermolipomas accounted for 3% of all orbital lesions (7).
Clinical Features
Orbital/conjunctival dermolipoma is a light pink to yellow, firm, sessile to moderately elevated lesion, the anterior portion of which is usually visible in the conjunctival fornix superotemporally. Fine hairs often protrude from the surface of the mass and are best seen with slit-lamp biomicroscopy. Although yellow lipid globules may be seen, the lipid is not so strikingly apparent as in orbital fat herniation. The lesion may extend anteriorly almost to the limbus and some patients complain of a visual field defect owing to the elevated lesion. It is occasionally bilateral, but often asymmetric. It is usually asymptomatic and is either noticed by the patient or by the physician on routine examination. It can cause mild ocular irritation or a foreign body sensation. It is generally stationary and significant enlargement is unusual. There is no predisposition for gender or race. Dermolipoma, like dermoid tumor, can occasionally be associated with certain systemic syndromes, such as Goldenhar syndrome, organoid nevus syndrome, mandibulofacial dysostosis, and others (11,12,13).
Diagnostic Approaches
Orbital dermolipoma is generally apparent on external examination and the diagnosis is easily made. In the case of a larger lesion, orbital computed tomography and magnetic resonance imaging can help to delineate the posterior extent of the lesion. These studies disclose a circumscribed oval or elongated mass extending into the orbit superotemporally in close association with the lacrimal gland and orbital fat. It appears solid, rather than cystic, and has attenuation similar to orbital fat.
Only gold members can continue reading. Log In or Register to continue