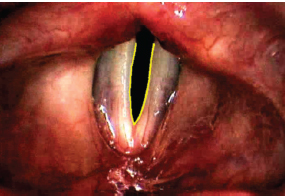 We sometimes think about the normal larynx as if that idealized state of perfection actually exists although we know that the term “normal” does not describe a single condition with set boundaries. Indeed given the opportunity to create the perfectly normal larynx, we probably could not agree on the elements of its design.3

It is generally assumed that normal glottal configuration is marked by complete glottal closure during the closed phase of phonation.4 However, in studies of “normal” larynges, the pivotal finding of most is the variety of glottal configurations identified.5–8 Casper et al. caution that in the absence of vocal fold pathologies, the difference between a normal larynx and one that is thought to be the cause of a voice disorder is indeed difficult to assess with use of stroboscopy alone.3 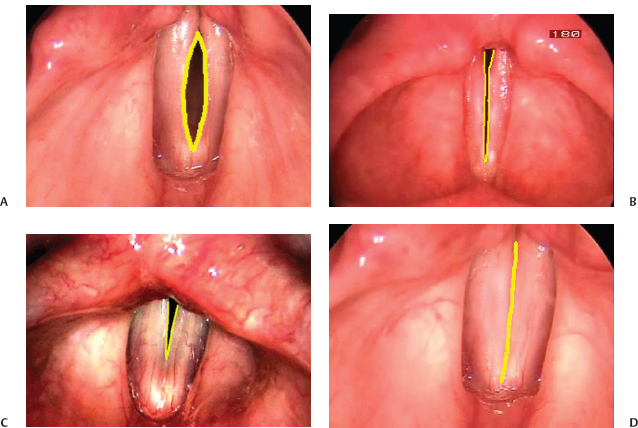 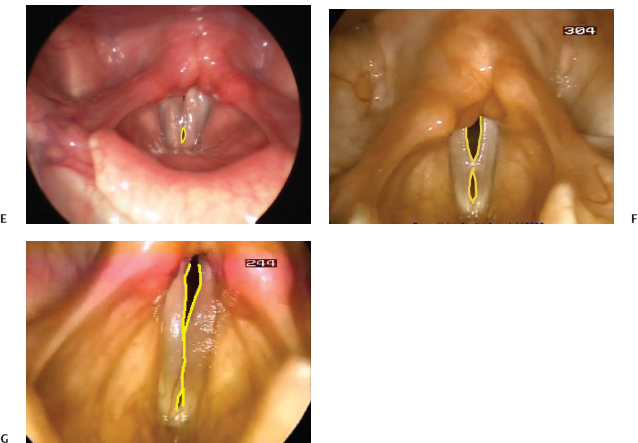 He also recommended that the examiner draw the shape of the glottis during maximum closure.

Bless et al. used seven line drawings of glottal configuration during phonation to develop a clinical evaluation tool to be used to rate the stroboscopic studies.10 The drawings represented frequently encountered glottal configurations and included complete closure; posterior glottal chink; anterior chink; spindle shape; incomplete closure; hourglass closure; and irregular closure patterns. Gelfer and Bultemeyer attempted to test the reliability of this system but included a measure of degree of glottal closure that was based on a three-point rating scale with 1 indicating complete closure and 3 indicating that the vocal folds never closed. They found that intrarater reliability was experience-dependent and perhaps related to the examiner’s visual-spatial skills. Their study also attempted to provide data on vocal fold vibratory patterns in normal adult females. Notably, they found that glottal configuration and glottal closure demonstrated the most intersubject variability of the stroboscopic parameters tested.6 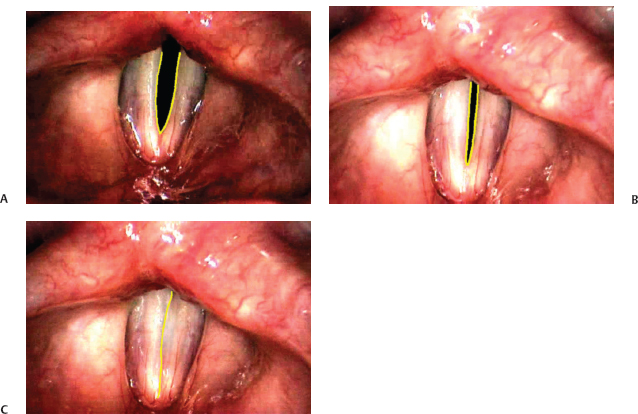 A method to quantitatively measure glottal configuration was described by Secarz et al.15 Frames from the stroboscopic examination that represent the most open glottal width and those representing the most closed glottal width are first identified. A reference mark is made somewhere near the middle of the glottis, and measurements in pixels are made between the reference mark and the glottal edge. Woo used a method of drawing the glottal edge and measuring the glottal area.16 A similar procedure using a laser beam to identify a reference point on the vocal folds to assist with standardizing scope distance from the vocal folds and then using a method to measure glottal width was described by Patel (R. Patel, personal communication, 2008).

Multiple studies in the late 1980s and early 1990s examined the gender differences in glottal configuration during stroboscopy. There was a consensus that there is a difference in the incidence of various glottal configurations between the genders.5,6,12,17 Men demonstrate complete glottal closure more often than women. Women demonstrate a greater incidence of posterior glottal chink, whereas, if present in men, the chink tends to be located toward the mid-membranous or anterior portions of the vocal folds.

Pitch, mode of phonation, loudness, and register will impact glottal configuration. One must consider muscle activation used to produce differences in phonation. Bonilha and Deliyski noted that glottal width irregularities should be expected when examining the vocal folds in any mode other than modal/habitual phonation even in normal, nondysphonic speakers.2 As an example, when the pitch is raised, the cricothyroid muscle is activated and pulls the thyroid and cricoid cartilage together thus lengthening and tensing the vocal folds. Clinicians generally believe that the result of this cricothyroid muscle activity is to prevent complete adduction during phonation thereby producing a complete mid-line glottal gap during phonation. However, Gelfer and Butlemeyer found glottal configuration was idiosyncratic within subjects at different pitches. They noted complete, incomplete, hourglass, and spindle configuration at high pitch, whereas low pitch was marked by complete, incomplete, and posterior glottal gap configurations.6

Register of phonation, or vibratory mode, has been found to impact glottal closure but not glottal shape.4 This phenomenon has been studied in modal and falsetto phonation. Though it is generally accepted that glottal closure is complete in modal register, incomplete in falsetto register, and extended in vocal fry, glottal configuration during both falsetto and modal varies between speakers.4 Once again, glottal configuration appears to be idiosyncratic.

Technical Considerations in the Measurement of Glottal Configuration

The technology of videostroboscopy limits the assessment of degree of glottal closure. Hapner and Johns write that stroboscopy provides only a two-dimensional view of the vocal folds viewed from above, the bird’s-eye view.19 This limits the ability to perceive three-dimensional contours of normal and pathologic tissue.

Videostroboscopy has been found to be useful in determining the outcome of medical, surgical, or therapeutic intervention to correct glottic defects. Serial examinations are used to establish outcomes. The problem is that technical issues associated with stroboscopy make it difficult to compare accurately one examination with a repeat examination. Hibi et al.21 and Peppard and Bless11 proposed a method to increase the reliability of serial examinations by drawing on transparencies overlaid on the video monitor while the monitor displays a chosen image of the vocal folds and using the drawing in a follow-up examination for positioning of the folds on the monitor during the examination.

Though videostroboscopy remains the most useful clinical tool to examine glottal configuration and glottal closure, care must be taken to avoid common technical pitfalls that impact the results of the examination. Bonilha and Deliyski warn that the extent of irregularity considered to be within normal limits should be determined for each evaluation tool used to assess glottal configuration as it may differ between evaluation tools.2 It is also important to be cognizant of the age and gender of the patient; the pitch, loudness, register, and mode of phonation during the examination; to establish a protocol of phonatory tasks to allow for better reliability in serial examination; and to understand the limitations of the stroboscopic examination.

Finally, Elias et al. studied stroboscopic variability in normal healthy singers.22 What was particularly interesting is that they found that 58% of the singers had abnormal videostroboscopy examinations, yet none of the singers reported any problems with vocal performance. In the discussion, the authors note that it is imperative for the examiner to remember that normal can occur in the presence of abnormal findings and that care should be taken before implying causality.

No definitive database of normal, nondysphonic vocal fold behavior has been developed, and most of the research into glottal configuration is at a minimum 10 years old. It behooves the examiner to be educated on normal variability in glottal configuration and glottal closure to prevent overdiagnosing abnormal behavior and referring for intervention.