The term glottal width has been used to describe a phenomenon with characteristics that overlap those of amplitude of vibration. Glottal width, however, does not look at the right and left vocal folds individually. It is defined as the size of the largest opening between the vocal folds during the vibratory cycle and depends on the extent of lateral movement of both vocal folds.

This principle holds true for vocally normal speakers voluntarily increasing or decreasing the pitch of their phonation and should not be applied to persons with voice disorders that cause high- or low-pitched phonation. One can expect this relationship between pitch and amplitude of vibration to be altered with certain types of vocal fold pathology. A key example of the difference can be found in persons who have a low-pitched voice due to vocal fold edema. These individuals may demonstrate a smaller than normal amplitude of vibration, rather than the larger amplitude expected with low pitch, because there is expansion of the tissues with fluid. The fluid under the vocal fold mucosa makes it taught and thus prevents the mucosa from “blowing in the wind” of the exhalation.

Luckily, softer phonation is less complicated with regard to the amplitude of vibration. Softer phonation is associated with smaller amplitudes of vibration due to the smaller force of the exhaled air on the vocal fold tissues. One should remember that this discussion regarding amplitude of vibration holds true for vocally normal speakers voluntarily increasing or decreasing the volume of their phonation and cannot be applied to persons with voice disorders that cause loud or soft phonation. An example of the difference between vocally normal speakers and those with a voice disorder can be found in persons who have a soft voice due to vocal fold atrophy (Video Clips 16 and 17). These persons may have larger than normal amplitude of vibration as there is less tension on the vocal fold tissue to impede the mucosa from moving laterally by the force of the exhaled air (Video Clip 24). It is important to remember that what causes a loud or soft voice in persons without voice disorders may be very different than what causes it in persons with voice disorders.

Typical amplitude of vibration has been defined for stroboscopy by Bless et al. as one third the width of the visible portion of the vocal folds.1 In the clinic, a five-point scale of severely decreased, decreased, typical, increased, and severely increased is commonly used (Fig. 16.1). Quantitative measures of vibration amplitude are available when using high-speed videoendoscopy and the resulting kymography. Because of the restrictions of stroboscopy, measurements of vibratory features using stroboscopy are not accurate or reliable. 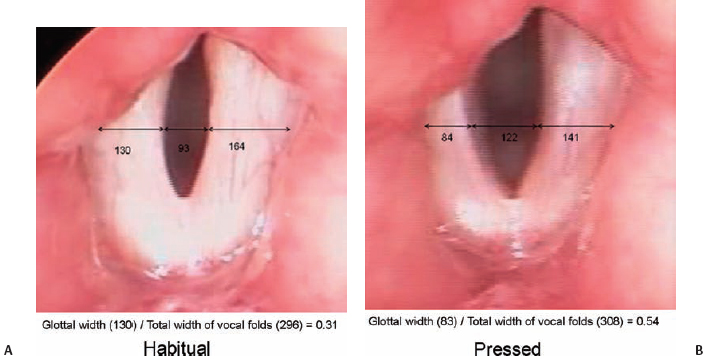 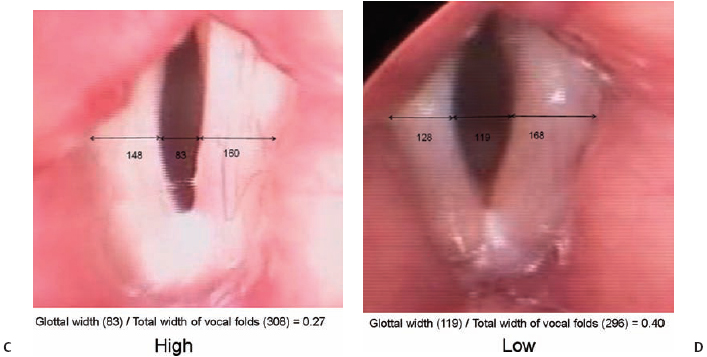 The pliability of the vocal fold mucosa has been considered one of the most important endoscopic indicators of vocal fold health and is directly reflected by the characteristics of the mucosal wave. Furthermore, the mucosal wave depends on the ability of the superficial vocal fold tissues to vibrate independently from the deeper structures and requires that the relationship of the vocal fold histologic layers be in balance. (See Chapter 3 for a more indepth discussion of vocal fold histology.) The mucosal wave is therefore not just an indicator of the health of the superficial tissue. It also provides information regarding the underlying layers of the lamina propria and the thyroarytenoid muscle.

The mucosal wave can be impacted by not only the vocal fold anatomy but also by changes in the loudness and pitch of phonation. High-pitched phonation is associated with a smaller mucosal wave, and conversely, low-pitched phonation is associated with a larger mucosal wave. Clinicians should expect the mucosal wave to decrease when gliding from habitual to high-pitched phonation (Video Clip 5). This occurs with lengthening of the vocal folds due to contraction of the cricothyroid muscle. The superficial vocal fold tissues are placed on stretch at higher frequencies of vibration leading to a decrease in the amount of available movable tissue. The cricothyroid muscle acts like a person pulling on two ends of a rubber band: as the rubber band stretches, the rubber gets thinner. The reduction in mass of the vibratory portion of the vocal folds, which causes them to vibrate faster, also reduces the tissue available for production of the mucosal wave. The opposite is true for lower-pitch phonation. When a person purposefully phonates in a lower pitch, he or she relaxes the thyroarytenoid muscles and allows for an increase in pliable mucosa that can “blow in the wind” of exhalation. 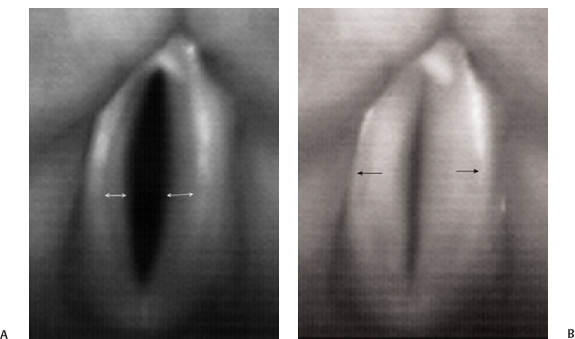 One thing to remember is that the above discussion regarding mucosal wave holds true for vocally normal speakers voluntarily increasing or decreasing the pitch of their phonation and should not be applied to persons with voice disorders that cause high- or low-pitched phonation. The same example used to illustrate this point for the amplitude of vibration can be applied to illustrate this point for mucosal wave. Persons who have a low-pitched voice due to vocal fold edema may have smaller than normal mucosal waves because there is fluid in the lamina propria tenting the mucosa of the vocal fold and preventing the mucosa from “blowing in the wind” of the exhalation. It is important to remember that what causes a high- or low-pitched voice in persons without voice disorders may be very different than what causes a low-pitched voice in persons with a voice disorder.

Mucosal wave is judged with stroboscopy during phonation with a normal pitch and loudness. Mucosal wave should also be judged during high- and low-pitched phonation and during loud and soft phonation to ensure that the changes in mucosal wave, which we may expect from our knowledge of physiology, do occur. Given that the mucosal wave is generally defined as the differential between the lower and upper margins of the vocal folds, as can be seen during the closing phase of vibration, we need stroboscopy, kymography, or high-speed videoendoscopy to be able to see the mucosal wave.