Myringitis is a poorly understood inflammatory disease of the tympanic membrane and external auditory canal. It has been referred to by other names in the literature, including granular myringitis, chronic epithelitis, otitis externa with granulations, granulomatous otitis externa, myringitis granulosa, chronic myringitis, and myringitis chronica.1,​2 The disease involves a de-epithelialization of the tympanic membrane, with replacement by granulation tissue. Despite many historical descriptions of the disease, very little has been written on the topic. Toynbee first recorded a description of myringitis in his 1860 text, describing a method of treatment that involved irrigation of the ear canal followed by leeches to the affected area.1 The next mention is by Politzer in his 1883 text.1 He coined the term granular myringitis. It has since been mentioned sporadically in the literature.

The true incidence of myringitis is unknown due to factors such as misdiagnosis, lack of knowledge of disease, and asymptomatic course in some patients.1,​2,​3,​4 Men and women are affected equally, and myringitis has been reported in all ages.5 Although myringitis may affect both ears, most cases are unilateral.6 Common misdiagnoses include cholesteatoma, chronic suppurative otitis media, or other chronic middle ear diseases.1,​2,​4 Blevins and Neilson reported incidences of 1.2% and 1.7%, respectively, of all patients presenting to an otology-specific practice.2,​7 Stoney reported myringitis in 2% to 5% of all patients diagnosed with otitis externa.1 El-Seifi and Fouad concluded that 1.8% of patients with otorrhea had myringitis.4

The presentation of myringitis is described in various ways in the literature. Otorrhea is the most common presenting symptom and is found in 75% to 86% of patients.1,​2,​7,​8 The drainage has been described as scant, weeping, mucopurulent, and/or foul-smelling. Other complaints include otalgia, itching, aural fullness, hearing loss, and tinnitus.1,​2,​3,​4,​7,​8 Some authors define myringitis as having an intact tympanic membrane with no hearing deficit1,​9 whereas others say that perforations are part of the natural history along with some degree of hearing loss.2,​3,​4,​7 Reported hearing loss associated with myringitis is both conductive and mixed, with an air-bone gap (ABG) of 10–20 dB.2,​6

Imaging is not recommended for patients with myringitis. However, due to its frequent misdiagnosis as chronic middle ear disease, these patients may have obtained prior imaging. Imaging typically shows a diffusely thickened tympanic membrane with a normal-appearing external auditory canal and the absence of middle ear disease. ▶ Fig. 13.1 shows the typical findings on a computed tomography (CT) scan of myringitis. 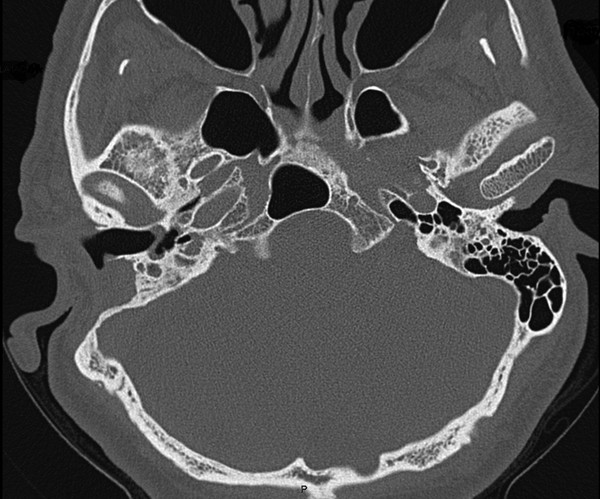 Fig. 13.1 CT scan of a right ear affected with myringitis. The tympanic membrane is diffusely thickened. There is no middle ear disease. The external auditory canal is normal. Interestingly, this patient had a history of a mastoidectomy on the right side for treatment of presumed cholesteatoma.

The pathophysiology of myringitis is not completely understood. Normally, the tympanic membrane has a unique centrifugal epithelial migration pattern that acts as a self-cleaning mechanism. It is thought that this mechanism is altered in chronic myringitis, causing a buildup of keratin material and induction of a granulomatous response.9

Schuknecht was the first to describe the histopathology of the disease. He characterized the disorder as a focal or diffuse replacement of the tympanic membrane and adjacent external auditory canal wall with granulation tissue. The underlying lamina propria remains intact. Histologically, he showed a dense infiltrate of small round cells, polymorphonuclear leukocytes, edema, and vascular channels.10

Various authors have proposed mechanisms to explain the disease process, including trauma or infection to induce the granulation reaction. Several papers report an increased rate of myringitis among patients with a history of pressure equalization tube placement or tympanoplasty.2,​11,​12 Blevins reported that 60% of patients in his series had a history of a previous otologic procedure, with most symptoms appearing within 1 year after surgery.2 In a pediatric study, Levi et al showed that 87% of children had a history of pressure equalization tube placement and 53% had a history of myringoplasty.11 As for possible infectious sources of chronic myringitis, several studies have cultured otorrhea for bacteriology. Pseudomonas aeruginosa has been the most common finding, with Staphylococcus aureus the second most common. Other bacteria found include Staphylococcus epidermidis, Proteus, Cornybacterium, Providencia, and Enterobacter species.1,​6,​8,​11 There is also an idiopathic form of chronic myringitis with which no inciting factors or comorbidities have been associated.2 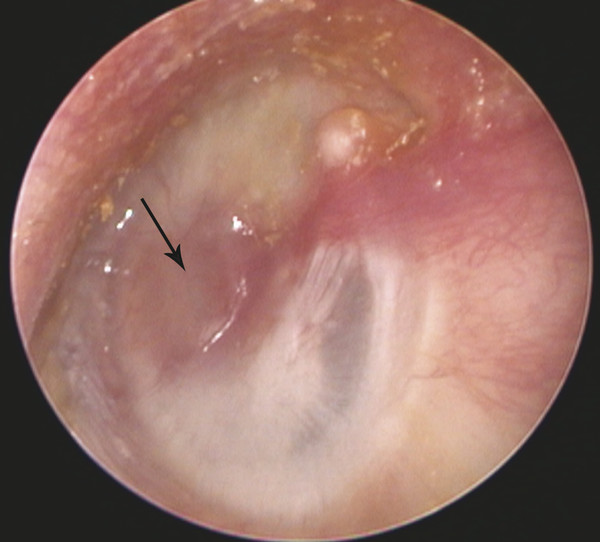