Otitis media is defined as inflammation of the middle ear and mastoid, and the duration of the process defines the subtype: acute (<3 weeks), subacute (3–12 weeks), and chronic (>12 weeks). Acute otitis media (AOM) (▶ Fig. 5.1) is the most common bacterial infection of children, affecting an estimated 72% of those age 3 years and younger.1 Acute otitis media is considered to be recurrent if it happens 4 or more times in a year, or 3 or more times in a 6-month period. Otitis media with effusion (OME) is diagnosed when an effusion, which can be serous or mucoid, is present in the middle ear. This is commonly a sequela of AOM (▶ Fig. 5.2). Chronic suppurative otitis media (CSOM) refers to a draining ear due to chronic inflammation of the middle ear and mastoid, with tympanic membrane perforation or an ear tube present, with or without cholesteatoma (▶ Fig. 5.3). The duration of drainage necessary for diagnosis varies, but 3 months is a commonly accepted length of time to constitute a chronic condition. The prevalence of CSOM varies depending on the population being studied, with rates as high as 30% reported for high-risk populations like the Inuit, but estimated at <1% for the United States.2 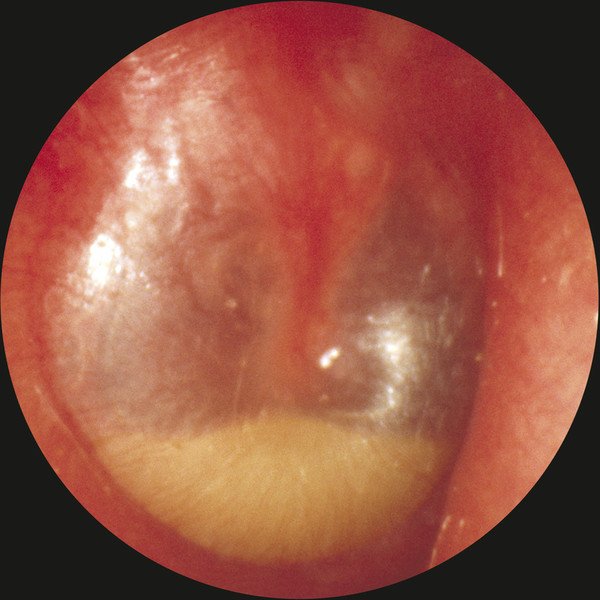 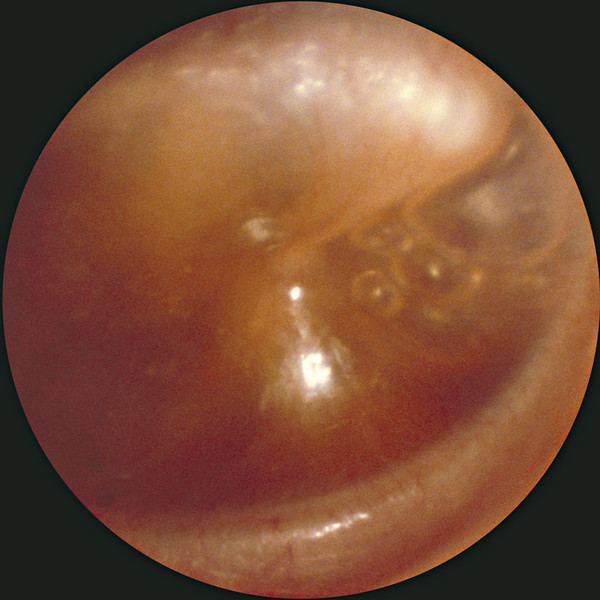 Fig. 5.2 Otitis media with effusion. Fluid appears behind an intact tympanic membrane. Gas bubbles can be seen anterior to the malleus. 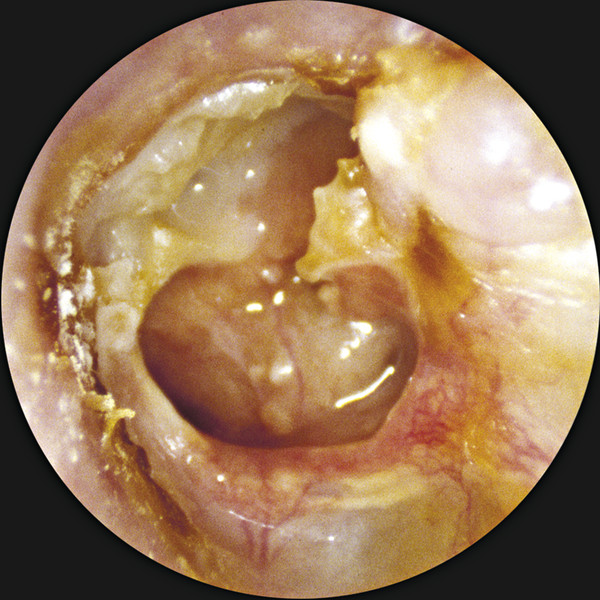 In contrast, the bacteria most commonly cultured from chronically draining ears due to CSOM are distinctly different aerobic and anaerobic organisms (▶ Table 5.1). The aerobic organisms identified most frequently are Pseudomonas aeruginosa, methicillin-resistant Staphylococcus aureus (MRSA), methicillin-sensitive S. aureus (MSSA), and coagulase-negative Staphylococci.7 Different studies show variability in the frequency of those four species, but they are consistently reported as the most commonly cultured organisms from chronically draining ears, with P. aeruginosa and MRSA being the most common.7,​8,​9,​10,​11,​12,​13 In addition, a host of other bacteria can be cultured, including Enterobacter, Proteus, Acinetobacter, Klebsiella, Alcalineges, Serratia, Streptococcus, and Corynebacterium. In one large study of 1102 patients in Korea, P. aeruginosa was cultured most frequently (31.8%), followed by MRSA (24.2%), MSSA (16.4%), and coagulase-negative Staphylococci (16.4).10 Of interest, these percentages remained similar even when their cohort was divided into those with and without cholesteatoma.

In patients with cleft palate, the results were slightly different, with 35% P. aeruginosa, 15.5% S. aureus, 14% Enterobacter faecalis, and 12% Proteus mirabilis.9 The higher percentage of gastrointestinal organisms suggests that nasopharyngeal reflux may play a role in the pathogenesis of infection in these patients.14 Surgery may also change the microbial environment, with one study showing that, compared with preoperative cultures, postoperative cultures on ears that continued to drain grew the same bacteria 22% of the time, different bacteria 51% of the time, and showed no growth 24% of the time.8 There is some geographic variation in the microbiology, with a study showing that the three most commonly cultured bacteria in CSOM in Nigeria were Klebsiella, Escherichia coli, and Streptococcus.15

There is also evidence of changing microbiology over time, with one study showing an increase of community-acquired MRSA causing CSOM from 0.7% to 11.4% during the years 1998 to 2006.16 Importantly, anaerobic bacteria have been cultured from 50% of chronically draining ears, including Peptostreptococcus spp., Bacteriodes fragilis, Fusobacterium spp., Prevotella spp., and Porphyromonas spp.17 Of note, anaerobic bacteria have been shown to act synergistically with both S. aureus and P. aeruginosa, increasing their virulence.18 Antibiotic coverage of anaerobic organisms has also been shown to improve time to resolution of ear drainage in CSOM.19 It is interesting to note that the most commonly cultured aerobic bacteria, namely S. aureus and P. aeruginosa, are also the most commonly cultured organisms in otitis externa, suggesting that direct inoculation from the external auditory canal is responsible for some of the microbiological milieu in CSOM. Some have suggested that the nasopharynx may be a reservoir of pathogenic bacteria for ear disease, and one study comparing cultures from the middle ear and nasopharynx in patients undergoing operations for CSOM found that cultured bacteria were the same 26% of the time.20

Fungi are implicated in approximately 5% of cases of CSOM.10 Aspergillus species, including niger and fumigatus, along with Candida species, including albicans and parapsilosis, are the most commonly cultured isolates.12 These infections are commonly a result of prior antibiotic treatments for bacterial CSOM. Of interest, in one study 80% of fungal infections showed concurrent bacterial infections, and 62% of the time the classic otoscopic findings of fungal infection (e.g., visible spores) were absent (▶ Fig. 5.4).21 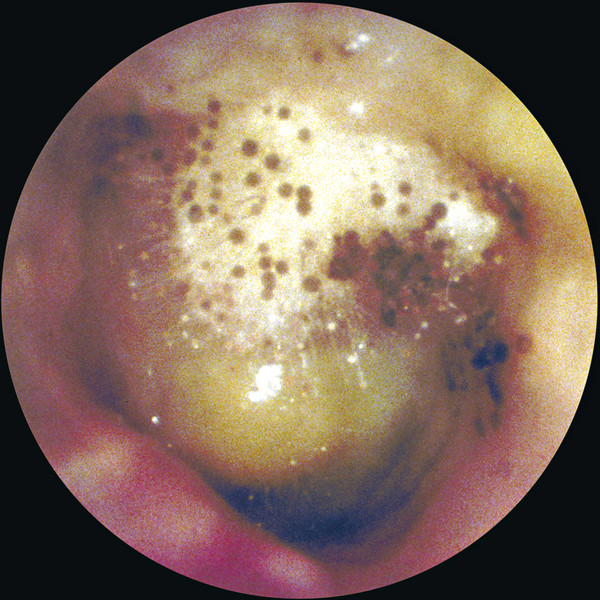 Fig. 5.4 Otomycosis. White and black fungal spores are visible in the external auditory canal, along with purulence.

Tuberculous otitis is estimated to cause less than 1% of chronic ear infections.22 It is difficult to diagnose because clinical signs and symptoms are variable. There is not always an association with pulmonary or systemic tuberculosis (TB), and TB is difficult to culture. However, diagnosis is important because treatment with anti-tuberculous medication can be successful. In a large study, including 53 cases of tuberculous otitis, the duration of symptoms varied between one and 10 years, with otorrhea reported most commonly, followed by hearing loss, otalgia, tinnitus, dizziness, and facial palsy.23 Tympanic membrane perforations, which varied in configuration from total, subtotal, central, multiple, and marginal, were commonly observed. In addition, 70% of patients had erosion of the ossicular chain, most commonly the long process of the incus. In that series, histology obtained during surgery was the most reliable method of diagnosis, and it showed granulomas, Langerhans giant cells, and caseous necrosis. Stains for acid-fast bacilli and culture for Mycobacterium tuberculosis were frequently negative from both discharge fluid and operative specimens. Polymerase chain reaction (PCR) was positive in the 7 of 8 cases in which it was used. Of note, 11 patients who were diagnosed with TB did not undergo surgery and were treated medically with a combination of isoniazid, rifampin, ethambutol, and pyrazinamide. All of these patients were treated successfully after a mean of 6.5 months, arguing that anti-tuberculous medication alone is successful in treating uncomplicated tuberculous otitis.23

Cholesteatoma is present in an estimated 40% of cases of CSOM.24,​25 Cholesteatomas (▶ Fig. 5.5) are keratinizing epidermal tissues within the middle ear or mastoid. Over time, they can grow, producing hearing loss and bone resorption, which can lead to facial nerve paralysis, labyrinthine fistulae, or intracranial complications. 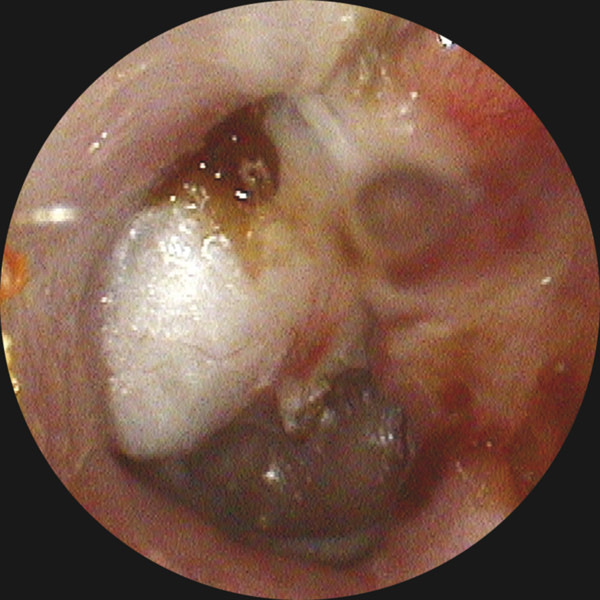 Fig. 5.5 Cholesteatoma. A white mass is seen in the posterior-superior quadrant, along with significant scutal erosion.