Melanocytoma of the Optic Disc

Chapter 135 Melanocytoma of the Optic Disc

Melanocytoma of the optic disc, a lesion best known to ophthalmologists, has received considerable attention in the literature.1–38 Since the last edition of this textbook, there have been only a few noteworthy publications in the English language literature related to this tumor.20,34–38 Most statistical information on optic disc melanocytoma was derived from a review of 115 patients from one center, which elucidated statistically the clinical variations and chances of visual loss, tumor growth, and malignant transformation.18

The term melanocytoma was originally coined by Zimmerman to describe a tumor with specific clinical and pathological features that was located partly or completely within the optic nerve head.30–32 Since the clinical and histopathologic nature of this lesion was clarified by Zimmerman and Garron,32 tumors of similar type have been recognized in extrapapillary locations throughout the uveal tract.20,21 Melanocytoma is now best defined as a specific variant of melanocytic nevus, located in the optic disc or anywhere in the uveal tract, characterized clinically by a dark brown to black color, and composed histopathologically of deeply pigmented round to oval cells with small, round, uniform nuclei.

Historically, melanocytoma was often confused clinically and histopathologically with uveal malignant melanoma.4,31,32 An important difference between the two is that melanocytoma appears to have an equal incidence in all races, whereas uveal melanoma is uncommon in black people.20 Furthermore, it is also uncommon for melanoma to be confined to the optic disc or to secondarily invade the optic nerve.

Most melanocytomas do not cause severe visual impairment. However, slight visual loss related to the tumor can occur in about 26%, usually due to mild retinal exudation and subretinal fluid.18 More severe visual loss can rarely occur, secondary to central retinal vein obstruction and/or spontaneous tumor necrosis6,24,28,31,39 or malignant transformation.1,18,20–22 In some cases, such visual loss is reversible with time.28 From 10–30% of patients with optic disc melanocytomas have an afferent pupillary defect (Marcus Gunn pupil) in the involved eye.14,18 This can occur even when the visual acuity is good. It is probably due to compression of the optic nerve fibers by the melanocytoma cells, a factor that also explains the associated visual field defect. Melanocytoma is usually unilateral. Bilateral cases have been rarely reported, usually in children but these cases may not be true melanocytomas.7,17,18,27 There has been some controversy as to whether they should be called true melanocytomas or disc pigmentation in association with other congenital disc abnormalities.2,3,17

Ophthalmoscopically, optic nerve melanocytoma has typical features.15,20,21,33 It is characteristically a dark brown to black lesion that is located partly in the optic disc. It is relatively small and confined to the disc in 15% (Fig. 135.1). More characteristically, it extends over the margin of the optic disc to involve the adjacent choroid (54%) (Fig 135.2) or into the adjacent sensory retina (30%) (Fig. 135.3).18 In some cases, the choroidal component is more pronounced than the papillary component. Although optic disc melanocytoma is generally believed to have few local complications, a recent study showed that there is some degree of disc edema (25%) (Fig. 135.4), intraretinal edema (16%), subretinal fluid (14%), yellow intraretinal exudation (12%), focal hemorrhage (5%), vitreous seeds (4%), and retinal vein obstruction (3%). These local complications can produce visual symptoms or visual loss in 26% of cases.18 This is generally mild, and severe visual loss is exceptional. Vitreous seeds from necrosis of the melanocytoma can extend into the anterior chamber, sometimes producing a black pseudohypopyon.29 The statistical risk factors for visual loss include retinal extension of the tumor and the presence of subretinal fluid. There have been recent reports of choroidal neovascularization adjacent to optic disc melanocytoma.37,38 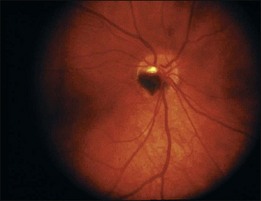 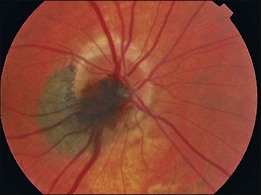 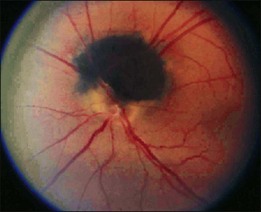 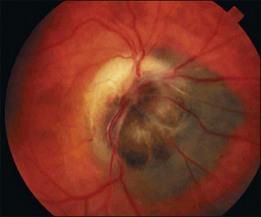 Melanocytoma of the optic disc traditionally was recognized to be a stable lesion with no tendency to grow. However, serial fundus photographs have documented that 11–15% of them show subtle enlargement over several years. This mild growth should not be misconstrued as malignant transformation.5,10,18 In one report, an eye with a progressively growing melanocytoma underwent enucleation and the lesion proved to be benign, despite progressive growth.12 Multivariate analysis has shown that the main predictive risk factor for growth is an initial thickness of ≥1.5 mm at the time of first diagnosis.18 Some tumors can grow slowly and produce ischemic optic neuropathy associated with tumor necrosis, resulting in severe visual loss.9,26,28 Others can cause central retinal vein obstruction and visual loss.6,24,30 In rare cases the tumor can present as neovascular glaucoma secondary to retinal vein obstruction.6

There are usually no systemic associations with optic disc melanocytoma. It has been reported in association with intracranial meningioma27 and type 2 neurofibromatosis,23 but it is still uncertain whether such associations are coincidental.