n unusual-looking nodule at the limbus should always lead you to suspect a malignancy, and it must be removed in toto. It is important to achieve clean margins when removing these nodules, so as not to leave any tissue that might prove malignant later on. A nodule may have excessive vascularity, which must be addressed during excision. Bipolar cautery or heat cautery can serve this purpose, but these often cause unnecessary trauma to the tissues. The following cases illustrate how the Fugo blade can be used in removing limbal nodules.

A 60-year-old farmer had noticed the formation and growth of a “white thing” at the limbus for over 6 months. A 5-mm hard white lesion sitting astride the lateral limbus appeared heavily vascularized.

Make a hole was made in the conjunctiva with a 100-µm Fugo blade tip. Administer lignocaine 2% through a cannula to inflate it around the lesion. 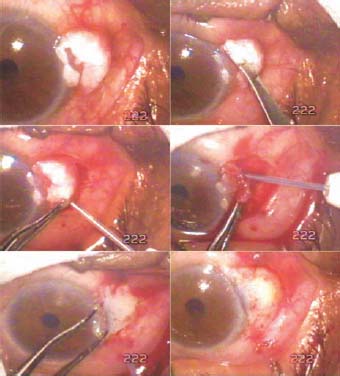 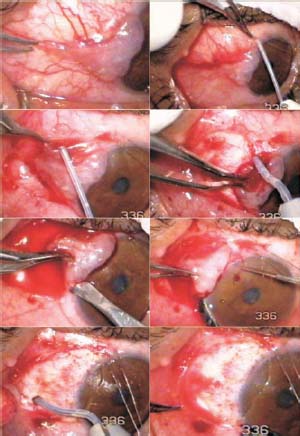 Prescribe mitomycin 0.02% for instillation seven to eight times a day for a period of 7 days, along with antibiotic–steroid ointment three times a day. In our case, the histologic examination report received after 1 week was negative for malignancy, and the patient had an uneventful recovery.

A 57-year-old truck driver presented with a fleshy vascularized nodule on the medial side of the cornea. The appearance of the nodule was unusual, almost the reverse of a commonly seen pterygium with the fleshy base situated toward the cornea and the apex toward the medial canthus. The nodule was removed in a manner similar to that used in Case 1 (Fig. 12.2). The histologic examination report received after 1 week was negative for malignancy. This patient, too, had an uneventful recovery.

Use of the Fugo blade to remove unusual limbal lesions has one great advantage: the ability to remove the finest visible remains of pathologic tissue with greater accuracy and with minimal damage to normal tissue.