The Eustachian tube in humans is a complex and dynamic organ with a small, but proportionately long, lumen and relatively weak muscles of dilation, all of which make it commonly prone to dysfunction.1 It is believed that the principal function of the Eustachian tube is to provide for adequate ventilation of the middle ear, but it is also recognized for its role in clearing secretions from the middle ear with its mucociliary flow and, when closed, for protecting against reflux of material and sound from the nasopharynx.1

Eustachian tube dysfunction is believed to be chiefly due to inadequate opening of the lumen. Failure of adequate tubal dilation is known to be associated with chronic negative middle ear pressure, difficulties with equalization of middle ear pressure, and otitis media with effusion. Over time, complications of tympanic membrane retraction may occur, including adhesive otitis media, cholesteatoma, and tympanic membrane perforation. These diseases affect roughly 1% to 3% of the population.2

The rates of developing pressure changes within the middle ear in the absence of a patent Eustachian tube have been recently measured in humans. Three healthy volunteers who avoided swallowing or yawning for up to 2 hours demonstrated steadily decreasing pressures down to 150 daPa on successive tympanometry measurements.3 Eleven patients undergoing parotidectomy who volunteered to have a catheter placed into the mastoid for 24 hours demonstrated similar rates of progressively negative middle ear pressure over time although three subjects showed increasing pressure from an initially negative baseline. The reasons for rising pressure within the middle ear space remain uncertain and under investigation.4

Assumptions have been made in the past that Eustachian tube function may be limited by its narrowest static lumen, which, although occurring in the cartilaginous portion just adjacent to the bony-cartilaginous junction, has been previously thought to be within the osseus portion.5 Surgical procedures intended to improve its dilatory function have been attempted since the 18th century,6 focusing on widening the osseous portion of the Eustachian tube using approaches from the middle ear, preauricular region, and even by middle fossa craniotomy. Poor long-term results (even with stenting) and life-threatening complications led to abandonment of these approaches. In the past three decades, submillimeter and slow-motion endoscopic evaluations of the Eustachian tube have demonstrated an association between Eustachian tube dysfunction and pathology affecting the dynamic dilatory process within its cartilaginous portion. Disorders involving the nasopharyngeal orifice of the Eustachian tube and the area in which the mucosal surfaces are in approximation at rest, termed the functional valve, are now believed to be the principal source of Eustachian tube dilatory dysfunction.7

Mucosal disease, with edema and other inflammatory changes within the cartilaginous Eustachian tube, is thought to be the most common cause for dilatory dysfunction. The source of the inflammation remains uncertain, but associations have been made with adenoid hypertrophy, reflux, allergic rhinitis, and chronic rhinosinusitis.6,​8 A mechanism for adenoid hypertrophy causing functional obstruction has been observed in which the swollen inflamed torus tubarius becomes compressed between the enlarged adenoid and the lateral pharyngeal wall during swallowing, thrusting it anteriorly to cover the tubal orifice at the time that it should be dilating.9 Disorders of the muscles, such as limited movements of the tensor veli palatini (TVP), early relaxation of the levator veli palatini (LVP), or lack of coordination between the two, have been observed. The LVP is the first to contract during swallows or yawns and it medially rotates the torus tubarius, holding it in position as a scaffold against which the relatively weak final dilator of the Eustachian tube, the TVP, then contracts. Lastly, benign or malignant tumors of the nasopharynx should be considered in cases of Eustachian tube dysfunction, especially in adults with unilateral middle ear effusion.

Chronic Eustachian tube dysfunction, despite maximal efforts to control possible underlying etiologies, may imply that the mucosa has become irreversibly injured. The reasons for the persistent disease remain uncertain. Bacterial biofilms have been identified in the middle ear and adenoid of patients with middle ear effusions, and these may play some role in mucosal disease within the Eustachian tube.10,​11

Patients in whom medical therapy failed are commonly offered tympanostomy tubes or adenoidectomy, but a substantial number fail to improve after extrusion of one or more tubes. Although tympanostomy tubes are known to be effective in relieving negative middle ear pressure, non-adherent tympanic membrane retraction, effusion, atelectasis, or other symptomatic Eustachian tube dysfunction, tube insertion does not treat the underlying problem. In addition, tympanostomy tube insertion carries some risk of complications, including otorrhea and recurrent infections (10 to 26%), tympanic membrane perforation (2%), and cholesteatoma (1%).12 Adenoidectomy may provide significant relief for children with otitis media with effusion associated with adenoid hypertrophy, especially if the adenoid is in contact with the torus tubarius.13 Endoscopic-assisted adenoidectomy permits careful but more complete removal of the tissue in contact with the torus tubarius and allows for light cauterization of the “cobblestoned” hyperplastic mucosa that may also involve the torus.

Patients who have failed maximal medical therapy and conventional surgical treatment, if appropriate, may be candidates for Eustachian tuboplasty. Patients may typically have persistent otitis media with effusion despite having had one or more tympanostomy tubes; recalcitrant non-adherent tympanic membrane retraction; troublesome or symptomatic negative pressure within the middle ear (documented on a tympanogram); or difficulties with pressure equalization during flights, scuba diving, or with other rapid changes in altitude. These patients usually have associated subjective symptoms, such as a sensation of ear pressure, otalgia, or conductive hearing loss.

Caution is needed for patients whose only complaint is a sensation of ear pressure or fullness, despite having normal tympanometry; the absence of objective ear pathology; or failure to improve with a tube. In such cases, the underlying problem is something other than Eustachian tube dilatory dysfunction and further evaluation is indicated. The most common differential diagnosis is temporomandibular joint disorder with associated musculoskeletal effects. It is noteworthy that the medial pterygoid muscle, which is immediately adjacent to the TVP muscle, may cause discomfort that radiates to the ear and Eustachian tube. Furthermore, a patulous Eustachian tube, Minor’s third labyrinthine window syndrome, semicircular canal dehiscence syndrome, and endolymphatic hydrops need to be considered in the differential diagnosis.

The authors have not selected younger children for Eustachian tuboplasty because it remains unknown whether reflux of pathogens is an important cause of acute otitis media and at what age they may outgrow the tendency to reflux. Eustachian tuboplasty may be indicated in adults with recurrent acute otitis media if there is significant evidence for mucosal inflammation or other compromise around the tubal orifice and valve area.

A comprehensive history and physical examination are important in the evaluation of Eustachian tube dysfunction. Patients should be questioned about inflammatory disorders, such as allergies, chronic rhinosinusitits, laryngopharyngeal reflux, or vasomotor rhinitis. Tobacco use or smoke exposure also negatively affects mucociliary clearance.

Typically, the tympanic membrane appears abnormal and there may also be middle ear effusion. Tympanometry findings include type B or C curves, unless the patient’s complaints are limited to air travel, scuba diving, or driving through mountains. A thorough endoscopic-assisted examination, assessing the nasal mucosa, nasopharynx, pharynx, larynx, hypopharynx, and subglottic space for signs of inflammation or underlying allergy, as well as granulomatous, laryngopharyngeal reflux, or other diseases, should be performed in addition to evaluating the Eustachian tube in detail.

The Eustachian tube orifice can be readily identified just posterior to the inferior turbinate by the prominence of the torus tubarius, also known as the posterior cushion. It is important to differentiate between the tubal orifice and the fossa of Rosenmüller just posterior to the torus tubarius. An important surgical landmark is where the internal carotid artery (ICA) courses just deep to the apex of the fossa; in some cases it may be located immediately under the mucosa.15 The condition of the Eustachian tube mucosa and the function of the peritubal muscles should be evaluated. To best inspect the tubal valve during swallowing and yawning, the endoscope should be directed down the longitudinal axis of the lumen, which courses approximately 45 degrees laterally and superiorly from the floor of the nasal cavity (▶ Fig. 45.1). Optimal views can be obtained by angling a fiberoptic endoscope, sometimes even by passing it through the contralateral nares and behind the vomer, or by passing a 30- or 45-degree angled rigid endoscope through the ipsilateral nasal cavity.

Preoperative high-resolution, non-contrasted computed tomography (CT) imaging, including temporal bone and nasopharynx CT imaging, is currently recommended before proceeding with balloon dilation. This test helps to exclude other possible pathologies that may compromise Eustachian tube function, including nasal and sinus diseases, middle ear disease, and nasopharyngeal tumors. Additionally, the position of the internal carotid canal should be assessed for any possibilities of an aberrant course that may bring it into proximity with the cartilaginous Eustachian tube. The distance between the Eustachian tube and the ICA is lowest at the osseous portion of the Eustachian tube, where the artery can even be dehiscent into the lumen. The distance between the nasopharyngeal orifice of the Eustachian tube and ICA is an average of 23 mm, but, in certain cases, it may be as little as 10 mm with an aberrant ICA.15 Presently, balloon dilation is not being performed in patients with significant dehiscence of the ICA into the bony Eustachian tube, even though the balloon catheter should theoretically be introduced only into the cartilaginous portion.

Currently, there are three commonly used surgical approaches to restore Eustachian tube dilatory function: laser-assisted tuboplasty, microdebrider (powered-shaver) tuboplasty, and balloon dilation tuboplasty. Any of these procedures can be combined with sinonasal surgery (e.g., septoplasty, inferior turbinectomy, adenoidectomy) for treatment of disease or for access.

This procedure is based on the hypotheses that dilation of the lumen by surgical debulking may facilitate the dilatory function of the TVP muscle and that removal of irreversibly thickened mucosa may allow it to regrow in a healthier and thinner state.

The surgery may be performed with local or general anesthesia. Nasal vasoconstriction is carried out with a topical decongestant spray, and submucosal injection of lidocaine with epinephrine is performed along the luminal surface of the torus tubarius. The Eustachian tube orifice can be viewed with a 30- or 45-degree 4-mm diameter endoscope, and the operation performed while watching a surgical video monitor.

Kujawski introduced the laser cauterization of inflamed mucosa and submucosa along the luminal side of the posterior-medial wall, where the inflammatory disease is typically most prominent.8 Cauterization begins from the leading edge of the torus tubarius and continues up to the valve region, and, in cases with disease extending well into the valve, submucosal ablation of the valve region may be done. If a patient is under general anesthesia, distending forceps may be used to achieve a better view and gain better access to the valve region. Cartilage is exposed; if a prominent cartilaginous bulge compromises the lumen, it can be removed by sharp dissection via laser vaporization. Complete circumferential cauterization is avoided, and only the lumen of the posterior-medial wall of the Eustachian tube should be cauterized to avoid synechiae formation (▶ Fig. 45.2). The ICA lies in increasingly close proximity to the Eustachian tube as it courses superiorly, and care should always be made to protect and avoid the artery. 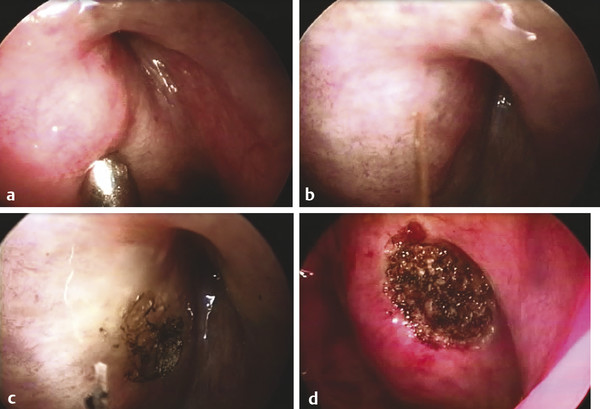