Dermoid of the Orbit 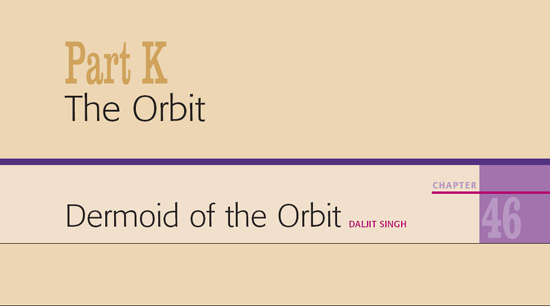 he patient in this case presented with a huge orbital cyst that appeared at the upper lid. She also had severe hypotropia and ptosis. She was a poor man’s daughter, and they could not afford to travel to seek help from an orbital or oculoplastic surgeon. We used the Fugo blade to excise the cyst. 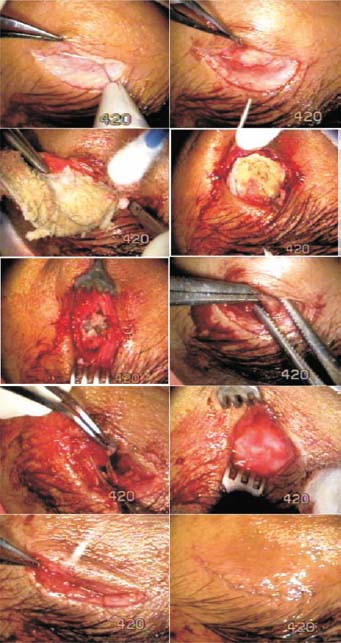 Figure 46.1. The cyst is incised over the most prominent projection and separated from the surrounding tissues with a 100-µm Fugo blade tip. A 1-cm incision is made in the cyst, and a large amount of cheesy material and hair is expressed. The visible cyst wall is excised to expose and remove more contents. The emptied cyst is held with artery forceps, and further isolation and excision of the wall is done with a scissors. The smooth bed of the cyst is visible. The incision is closed in two layers with 80-µm steel sutures.

This surgery was a unique and exhilarating experience for me because I had never ventured so far into the orbit. Subsequently, I discovered that blunt dissection could be done bloodlessly using a 600-µm Fugo blade tip. If I were to encounter a similar case tomorrow, I would alter the surgical technique slightly as follows.

Tags: Ocular applications of the Fugo blade
Sep 11, 2016 | Posted by admin in OPHTHALMOLOGY | Comments Off on Dermoid of the Orbit
Premium Wordpress Themes by UFO Themes
WordPress theme by UFO themes