Chronic Otitis Media in the Setting of Congenital Ear Disease

With only a single reported patient in the literature, middle ear cholesteatoma in CAA is extremely rare.1 Logically, it does not seem possible for skin to become trapped in the middle ear space when the ear canal did not open, an eardrum did not develop, and ectoderm/skin never invaginated into the temporal bone from the branchial apparatus. If Michaels’s [Epidermoid Formation Theory of congenital cholesteatoma] (see below) is true however, then it is theoretically possible for epithelial cells to become trapped in the tympanic cavity.2

The diagnosis in this single pediatric patient was made only at the time of surgery for CAA when an unusual soft tissue mass was noted in the middle ear space (▶ Fig. 47.1). This soft tissue was not expansile and did not appear to be skin, but on pathological examination, keratin was identified (▶ Fig. 47.2). 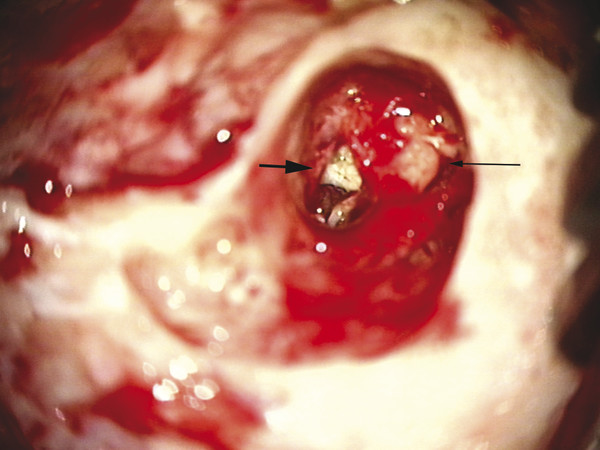 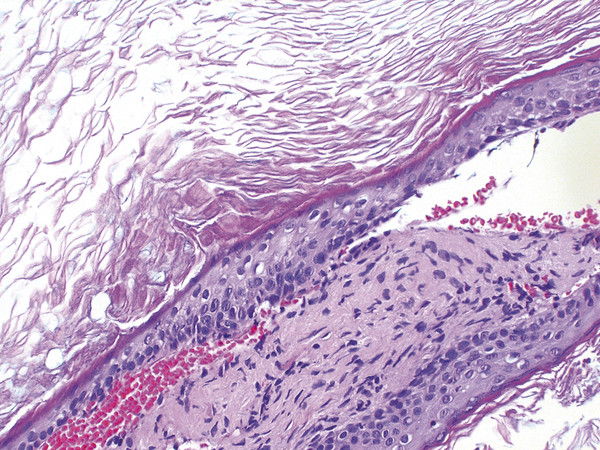 Preoperatively, the high-resolution temporal bone computed tomography (CT) scan showed a discrete rounded density in the middle ear space (▶ Fig. 47.3) that was not expansile or erosive. In almost all patients with CAA, opacification in the epitympanum or mastoid represents either fluid or mesenchymal tissue, not cholesteatoma. Nevertheless, any opacification in an ear with CAA needs close scrutiny with a follow-up CT scan in one year, especially in the ear with stenosis of the canal and opacification lateral to the middle ear space (see below). Opacification in an ear with CAA disqualifies the patient from surgical repair (the opacity in the above patient was small and limited, with no bone erosion and otherwise favorable anatomy); if the opacification is fluid, the Eustachian tube may be immature, and hearing results will be poor. Interestingly, acute otitis media in patients with CAA is rare, and patients generally do not develop “classic” acute otitis media symptoms. Although it is certainly possible to have fluid in the middle ear space, the patient will, in general, not have pain because there is no tympanic membrane. 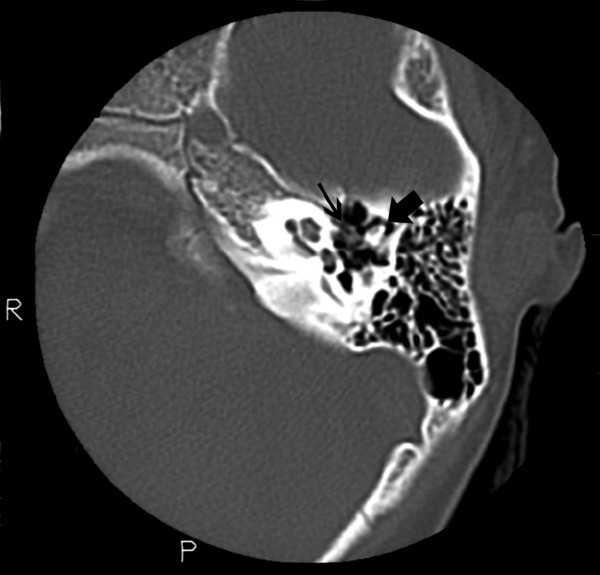 If the opacification is mesenchymal tissue, this tissue will impede the vibratory capacity of the ossicles and prevent a good hearing outcome. This tissue will remain unchanged on serial radiographic examinations. Although Eustachian tube dysfunction in CAA is rare, any opacification of the middle ear or mastoid is a relative contraindication to surgery, but must be followed with a second CT scan (generally in 1 year) to ensure it is not expansile and does not erode or remodel bone. Alternatively, magnetic resonance imaging (MRI) with diffusion-weighted sequences can often differentiate between cholesteatoma and fluid or soft (mesenchymal) tissue.3,​4

In summary, opacification in the middle ear space of the patient with CAA should raise minimal concern for cholesteatoma (as mentioned, this is extremely rare in the middle ear and much more common laterally, in a stenotic ear canal, as described below). Features of cholesteatoma include a rounded density exhibiting bony remodeling or bony expansion. Opacification extending from a stenotic ear canal into the middle ear is more concerning. Options for evaluation include MRI or repeating the high-resolution CT imaging in 9–12 months.

In an ear with CAA, opacification of the middle ear or mastoid in the absence of bony erosion can be followed with repeat high-resolution CT imaging in 1 year. If the scan is stable, the opacification most likely represents fluid or primitive mesenchymal tissue, a relative contraindication to surgical repair of CAA, but a safe ear nonetheless. 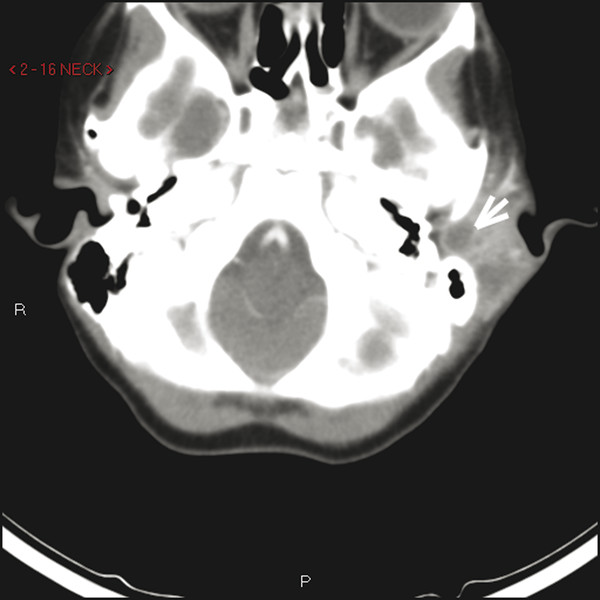 Findings on physical examination may include keratin debris noted at the meatus, drainage from the meatus, or pain in the ear. Any ear canal measuring 2 mm or narrower should raise the suspicion of canal cholesteatoma and prompt high-resolution CT scanning of the temporal bone (▶ Fig. 47.5).5 The recommended age for high-resolution CT imaging for the evaluation of a child’s candidacy for CAA repair is generally around the age when surgery is being considered (5–7 years). Some practitioners recommend earlier scanning, but radiation doses cover a greater surface area in smaller children. CT scanning certainly does not need to be performed before the age of 3 years, even in the patient with canal stenosis. On the other hand, drainage from a stenotic ear canal should prompt earlier CT scanning, but canal cholesteatoma is often not seen or identified until the age of 4 years.5 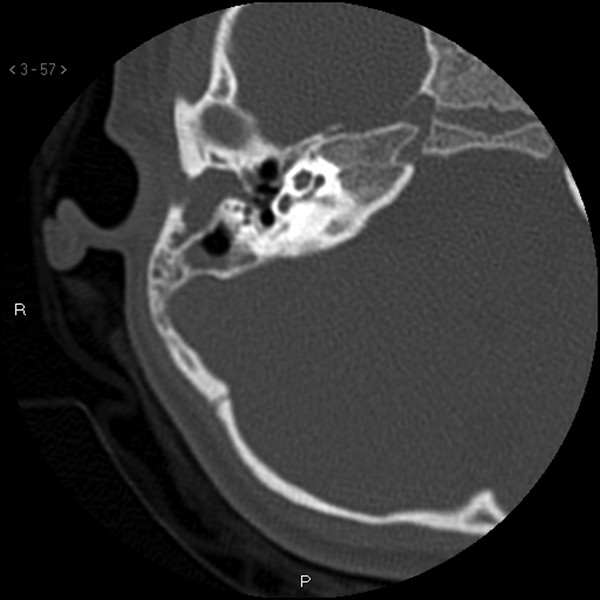 High-resolution CT shows a rounded density in the lateral temporal bone, medial to the meatus. The rounded density remodels bone but is not invasive (▶ Fig. 47.6; ▶ Fig. 47.7). The patient may also have a rudimentary tympanic membrane that can bulge into the middle ear space (▶ Fig. 47.8). 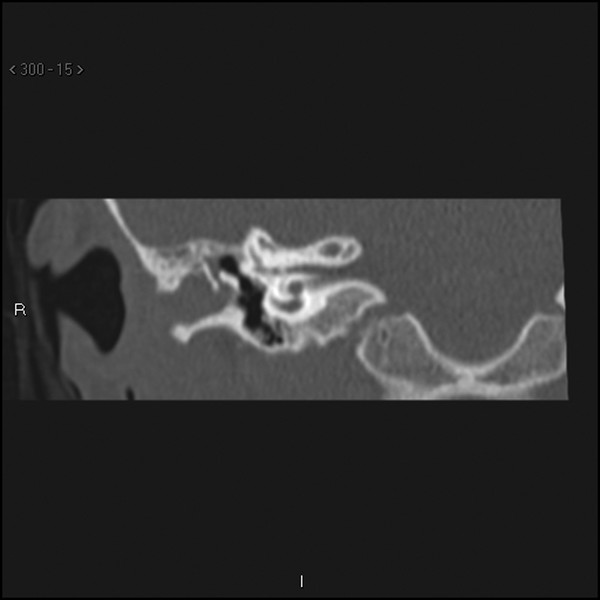 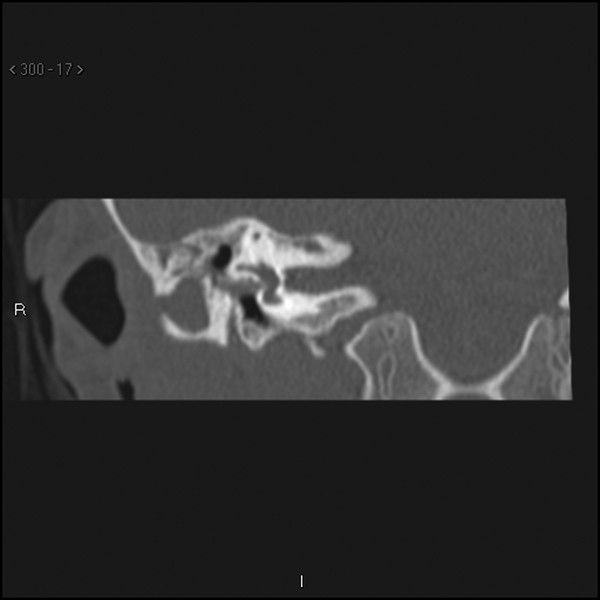 Fig. 47.7 Coronal high-resolution CT scan of the right temporal bone anterior to the section in ▶ Fig. 47.6, showing the rounded density of a canal cholesteatoma. 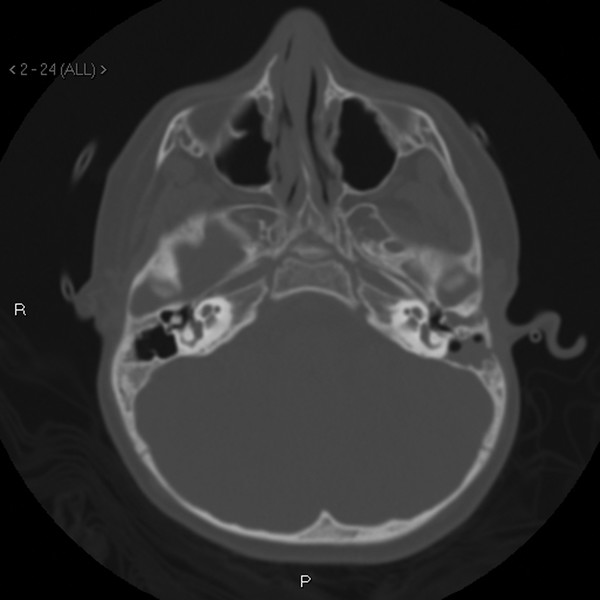 A linear opacification running in the bony canal without bony erosion is sometimes seen extending from the meatus to the middle ear or rudimentary tympanic membrane (▶ Fig. 47.9). Surgical exploration has shown this to be a fibrous band down to the mesotympanum and not cholesteatoma. This fibrous band can be a helpful landmark to the middle ear when drilling the canalplasty, but care must be taken as the drilling proceeds medially, as this band may be connected to the manubrium of the malleus. 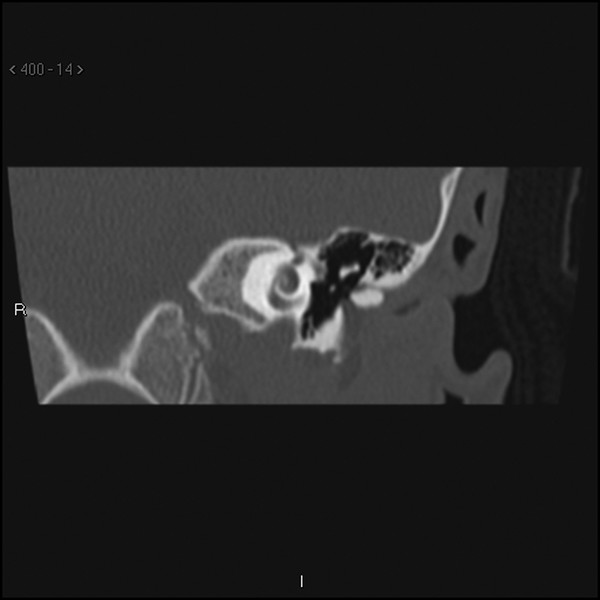 Fig. 47.9 Coronal high-resolution CT scan of the left temporal bone showing a thin linear opacity extending from the lateral canal to the mesotympanum in a patient with ear canal stenosis. This linear density was not cholesteatoma. Note the lack of bony expansion or remodeling.

Surgical management of ear canal cholesteatoma requires a postauricular incision, with standard mastoid periosteal incisions along the linea temporalis and perpendicular down to the mastoid tip. The periosteum is elevated to the posterior canal skin, and the skin is incised transversely at the bony-cartilaginous junction. When the canal is entered, squamous debris is identified and removed (▶ Fig. 47.10). The debris is suctioned to the medial bony canal or to a rudimentary tympanic membrane. Once the squamous debris is removed, the eardrum can be assessed and elevated with a standard tympanomeatal flap, and the middle ear and ossicles evaluated. 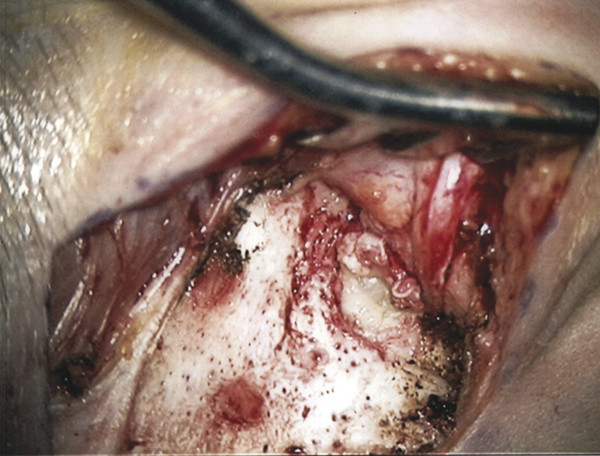 The canal must still be addressed so that the cholesteatoma does not recur. Canal skin can be elevated medially and a canalplasty performed, widening the canal superiorly, inferiorly, and anteriorly. Mastoid air cells should not be opened. Alternatively, the stenotic canal can be addressed as an atretic ear, with removal of the canal skin (or saving a strip of canal skin anteriorly) and drilling the canal superiorly to identify the tegmen. Once identified, the tegmen is followed medially into the epitympanum (as in a standard atresia operation), where the malleus and incus (often fused) are identified. The final area to drill is a bony bridge between the head of malleus/body of incus in the epitympanum and the rudimentary eardrum opening into the mesotympanum. The ossicles are freed from the surrounding bone. Temporalis fascia can be placed medial to the native eardrum remnant, draped over the malleus/incus and up onto the canal wall in a lateral surface fashion. Placement of the skin graft, ear canal packing, and wide meatoplasty proceed similarly to a standard atresia operation.6

Prevalence of cholesteatoma in external auditory canal stenosis is high, with estimates ranging from 19% to 50%.5,​7,​8 Risk factors and exam findings include a canal 2 mm or narrower (especially in patients 12 years or older), female gender, otorrhea, otalgia, and mastoid swelling or abscess.5,​7,​8 Age does seem to be a factor, as older patients with external auditory canal stenosis are more likely to develop cholesteatoma, probably because they come to diagnosis after years of growth and manifest more urgent symptoms.7 No cholesteatoma has been found in children 3 years of age or younger.5

47.4 Chronic Otitis Media as a Postoperative Complication of CAA Surgery

Surgery to repair CAA for the purpose of hearing rehabilitation involves drilling the tympanic bone to identify the middle ear space, freeing the ossicular chain from the surrounding bone and atretic plate, placing an overlay temporalis fascia graft for eardrum reconstruction, and using a thin split-thickness skin graft to cover the temporalis fascia graft and bony canal wall. Meatoplasty is performed, and the skin graft is delivered through the newly created meatus and sutured to the native skin of the concha circumferentially.6,​9 Despite meticulous technique, the most common complication of surgery is canal stenosis, which occurs in 15% to 30% of patients.10,​11,​12

Canal stenosis takes two forms: lateral soft tissue stenosis is usually seen within the first 6–12 months after surgery, and bony stenosis secondary to new bone growth is seen during and after puberty. Even though the skin graft in the canal does not migrate, the skin is alive and produces dead skin, which is why the canal requires cleaning 1 to 2 times a year. If the dead skin cannot be cleaned, either because the meatus has stenosed or new bone has formed trapping skin behind the new bone, it accumulates over time, can cause infection and drainage, and can begin to erode the bony canal or push into the middle ear space.

In these two instances where the skin cannot be adequately cleaned (meatal stenosis and new bone growth), a high-resolution CT scan is advised. CT imaging may show lateral soft tissue stenosis with a widely patent medial bony canal (▶ Fig. 47.11). Imaging may also show exuberant new bone growth with opacification (trapped skin) behind the new bone growth just lateral to the middle ear space (▶ Fig. 47.12). For these two conditions, revision surgery is recommended. Goals of revision surgery include removal of all accumulated keratin debris, and either closing off the canal (with compulsive technique to remove all epithelium) or reopening the canal by resecting the fibrous tissue, causing the lateral stenosis (and usually skin re-grafting) or drilling away the new bone growth (and most often replacing the skin graft).10 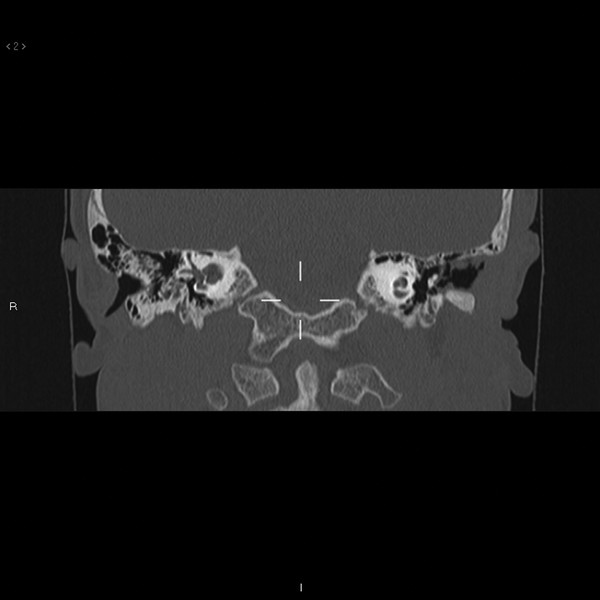 Fig. 47.11 Coronal high-resolution CT of the left temporal bone showing stenosis of the soft tissue of the lateral canal with a widely patent bony medial canal after prior CAA repair. Note debris in the medial, bony canal.