This chapter will cover the underlay tympanoplasty, defined as the reconstruction of the tympanic membrane via placement of graft material medial to the tympanic membrane defect, with the graft positioned medial to any remnant middle fibrous layer and the annulus. This is the most commonly utilized tympanoplasty technique and is in contrast to the lateral graft (overlay) technique, which places the graft lateral to any remnant middle fibrous layer and the annulus. The over-under technique, also addressed in this chapter, is a variation of the underlay approach that allows management of anterior or large central perforations involving the malleus. With this technique, the periosteum and epithelium are taken off the malleus, thereby improving exposure of the anterior mesotympanum. The graft is then placed lateral to the malleus but still medial to the annulus. A summary of the advantages and disadvantages of the various techniques for tympanoplasty is shown in ▶ Table 23.1.

The key to a successful underlay technique is secure anchoring of the graft, either under the annulus and/or with support of middle ear packing material. The two most important factors in determining the likely outcome are the etiology of the perforation and the status of the middle ear once all disease has been eradicated. Traumatic tympanic membrane perforations demonstrate a spontaneous healing rate of 78%–95% at 12 months, with an increase in healing with paper patch myringoplasty.1,​2,​3 Some perforations may be managed in the office setting with a fat myringoplasty. These would be small, posterior perforations (5%–10% in size) in patients who may not wish to undergo surgical repair. The success rate, especially with chronic perforations, is improved with surgical repair using a formal tympanoplasty technique.

It is important to distinguish dry central perforations with a good middle ear space and aeration from other complicating factors, such as cholesteatoma, severe mucosal disease, Eustachian tube dysfunction, tobacco usage, and ossicular chain abnormalities. These other factors may decrease the likelihood of success with tympanic membrane reconstruction. Absolute contraindications for tympanoplasty include poor health, uncontrolled severe middle ear or mastoid infection, and uncontrolled cholesteatoma necessitating mastoidectomy as well. The status of the contralateral ear should always be considered because operating on an only-hearing or better-hearing ear should be avoided except in rare cases due to the risk of irreversible hearing loss with surgery. Relative contraindications included Eustachian tube dysfunction and smoking, where long-term failure approaches 60%.4

The traditional underlay grafting technique can be used in most perforations, especially those posteriorly located (▶ Fig. 23.1). Difficulty arises when working with perforations that are anterior or adjacent to the malleus (▶ Fig. 23.2). The improved exposure with the over-under variation is ideal in total perforations, large anterior perforations, perforations involving the malleus or umbo, or where better visualization of the anterior mesotympanum is necessary. Placement of the graft and packing material is easier with the over-under variation, compared with the traditional underlay technique given that one can anchor the graft under the annulus and “lock” it into position over the malleus, preventing medialization of the graft. 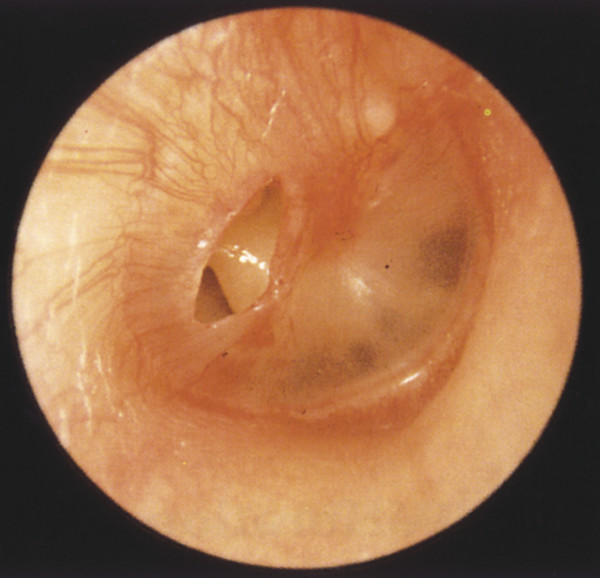 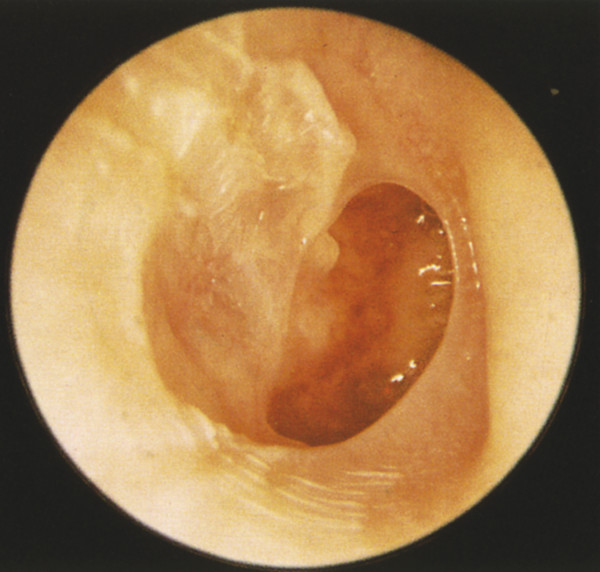 The lateral grafting technique has similar benefits but requires more work on the canal for wider exposure and is technically more difficult to teach.

The first decision the surgeon must make is whether the tympanoplasty can be performed purely transcanal or if a wider approach, such as postauricular, should be used. A transcanal approach may be an option if the canal is of adequate size, usually accommodating at least a 5 mm or larger speculum. The anterior overhang must also be considered in relation to the location of the perforation given that it can obstruct the view substantially. Finally, an incision must be made to harvest temporalis fascia, and enlarging the incision to perform a complete postauricular approach can often ensure a significantly better view and, hence, a better outcome.

Approximately 1 mL of 1% lidocaine with 1:100,000 epinephrine is injected into the posterior/superior ear canal in the area of the vascular strip. Inserting the needle laterally into the thicker soft tissue of the canal and infiltrating the solution slowly will help to prevent formation of blebs in the ear canal. Most surgeons make canal incisions, whereas some will raise the canal skin from behind prior to making any canal incisions. If canal incisions are made first, the vascular strip medial incision is made approximately 4 mm lateral to the tympanic annulus. Incisions are then made superiorly along the tympanosquamous suture line at approximately 12 o’clock and posterior-inferiorly along the tympanomastoid suture line at approximately 4 o’clock in a left ear (▶ Fig. 23.3). An epinephrine-soaked piece of absorbable packing is placed into the canal for hemostasis. 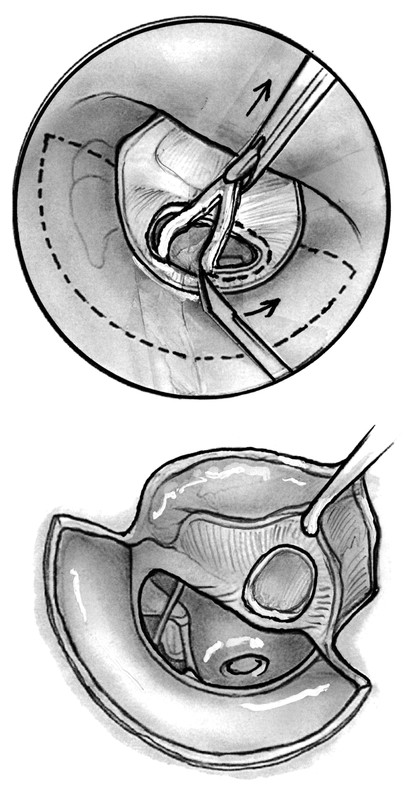