The epitympanum is an important anatomical region in otologic surgery, particularly in the treatment of cholesteatoma and chronic suppurative otitis media. Its relevance in the treatment of lesions that extend or impact on the structures within the epitympanum cannot be overemphasized. These include tympanosclerosis, glomus tumor, facial schwannomas, neoplastic lesions from the external auditory canal (such as squamous cell carcinoma), and meningoencephaloceles, among others.

The epitympanum is bounded laterally by the scutum, the malleus, and the pars flaccida. The tegmen tympani serves as its roof and the tympanic diaphragm and tensor canal its floor. It communicates with the incudal fossa posteriorly. The facial nerve and the ampullae of the lateral and the superior semicircular canals are the most important structures within this space medially.1 Anteriorly, the tegmen tympani courses inferiorly to the level of the tympanic diaphragm and attaches to the tensor tympani bony canal. There are several variations in the anterior epitympanic region, depending upon the size of the cog (the bony plate extending from the tegmen), the space anterior to the cog (often called the epitympanic sinus), the length of the tensor fold, and the size of the supratubal recess superior to the Eustachian tube.2 At the medial wall of the anterior epitympanum, the facial nerve may be dehiscent due to disease or from an anatomical variation. We have shown the most consistent landmark leading into the epitympanum is the cochleariform process. The facial nerve curves in a consistent fashion posterior-superiorly around the cochleariform process within 2 mm. Past this point, the cochleariform process is on average 7.81 mm from the nerve at the geniculate ganglion. As it deviates from the cochleariform process superior-medially, the facial nerve makes a mean angle of 30 degrees from the tensor tympani tendon.3

Epitympanectomy can be performed alone or in combination with more extensive temporal bone dissections. It is useful in the context of limited disease, particularly when encountering a sclerotic temporal bone that requires a more strategic approach. Of course, such a determination can only be made through the use of a computed tomography (CT) assessment. Atticotomy is a term often used synonymously with epitympanectomy. However, in our opinion, atticotomy implies a procedure designed to access the posterior portions of the epitympanic space, whereas an epitympanectomy includes exposure of the anterior epitympanic space and the supratubal recess.

An epitympanectomy can be performed as the sole procedure or in combination with a mastoidectomy. Accessing the epitympanum directly through the ear canal (endaural), through a posterior corridor (canal wall-up), or when the facial ridge is lowered (canal wall-down) depends on those clinical decisions relative to the disease, its extent, and the degree of temporal bone pneumatization. By far the most common indication for an epitympanectomy is removal of a pars flaccida retraction pocket or cholesteatoma.

The preoperative workup should be conducted with a thorough history, microscopic examination of the ear, audiologic testing, and high-resolution CT scanning of the temporal bones. Magnetic resonance imaging (MRI) may be performed if the diagnosis of a cholesteatoma is in doubt, particularly in evaluating recidivism. It is also useful in the diagnosis and in defining the extent of a meningoencephalocele. Although the true extent of the disease may only be confirmed intraoperatively, a CT scan is integral in the process of informed consent, vis-a-vis complications, and in planning the surgical approach. The feasibility of middle ear reconstruction, posterior canal preservation, or the need for a postauricular incision is part of this decision process.

There are two primary approaches to an epitympanectomy: endaural and postauricular. Both utilize a two-handed technique with a standard surgical microscope and are familiar approaches to the ear used commonly for tympanoplasty, mastoidectomy, and cochlear implantation. Each technique has advantages and disadvantages (▶ Table 34.1). The endaural approach results in a smaller and less cosmetically visible scar but allows a smaller lateral working space. A postauricular approach requires a larger incision but allows a more lateral working space. A well-placed postauricular incision can also be cosmetically acceptable, and a previous postauricular approach may steer a surgeon towards using the same incision.

Accessing the epitympanic space through a postauricular approach usually aims to preserve the canal wall. It requires identifying the mastoid antrum and continuing the dissection anteriorly between the canal wall and the tegmen tympani to remove the bone lateral to the epitympanic space. This can then be combined with an endaural dissection to remove the disease in a so-called combined approach. The endaural approach, our preferred technique, requires stepwise removal of the scutum and variable amounts of the canal wall to expose the epitympanum. The benefit of this is that the exposure required is tailored to the extent of the disease, with less surgical time and overall morbidity. A partial or complete epitympanectomy may be performed depending upon the volume of disease. Complete epitympanectomy requires the removal of the incus and head of the malleus and complete removal of the lateral epitympanic bone to expose all the boundaries of the epitympanum. The endaural approach also allows for harvesting of reconstructive material, such as temporalis fascia (through the superior extension of the incision) or cartilage and perichondrium (from the tragus or the concha). 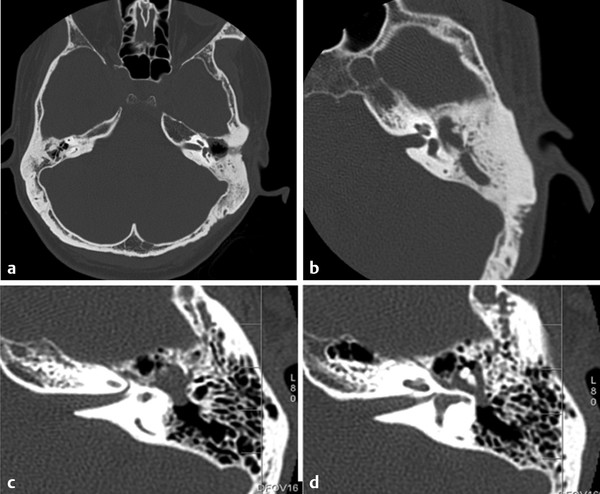 Once the patient has been prepped and draped, local anesthetic with epinephrine is used to infiltrate the terminal incisure, conchal bowl, and the external auditory canal. Shaving is not needed.

A #15 blade is used to mark out an incision between the tragus and root of the helix (▶ Fig. 34.2). This is carried down into the bony ear canal at the 12 o’clock position. A Lempert periosteal elevator is used to expose the bone beneath. A transverse incision is then made just deep to the conchal cartilage, along the posterior wall of the canal from the 12 o’clock to the 6 o’clock position (▶ Fig. 34.3). Sharp dissection of the skin to undermine the conchal bowl cartilage and root of the helix is performed to remove this tissue to create an appropriately sized meatus (▶ Fig. 34.4; ▶ Fig. 34.5; ▶ Fig. 34.6; ▶ Fig. 34.7). Because this maneuver provides the exposure for the operation, the size of the meatoplasty will depend upon how much dissection is needed. An aggressive dissection and bony exposure is usually required. Two double-pronged endaural retractors (Fisch endaural retractors with anti-reflective coating, Karl Storz GmbH & Co KG, Tuttlingen, Germany) are used both in an anterior-posterior position as well as in a superior-inferior position (▶ Fig. 34.8; ▶ Fig. 34.9). Performing a meatoplasty early means it need not be done at completion of the surgery, where bleeding can obscure the surgical field. Tragal cartilage and temporalis fascia can also be harvested at this stage. Undermining the meatal flap is also advised at this stage to help preserve meatal skin for reconstruction. 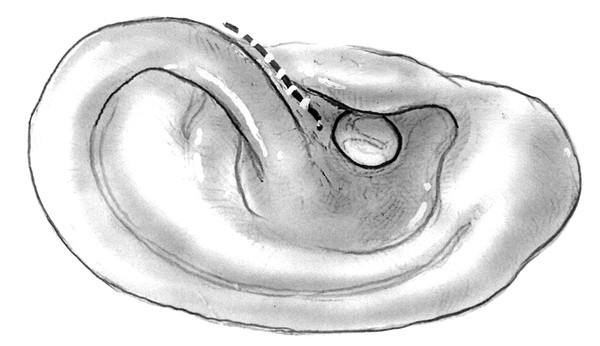 Fig. 34.2 Endaural incision, right. The incision is made from the 12 o’clock position to the groove between the tragal cartilage and the root of the helix.