Chronic Ear Disease in the Modern Era: Evolution of Treatment, Epidemiology, and Classification

Prior to the modern era of antibiotics, otitis media was very often accompanied by deleterious outcomes, as evidenced by this quote from Hippocrates: “Acute pain of the ear with continued strong fever is to be dreaded for there is danger that the man may become delirious and die.”1 Surgery for chronic otitis media likely dates from antiquity, and drainage of abscesses by military surgeons and others was probably commonplace; however, little evidence of this remains. The history of chronic ear disease is well covered by the works of Milstein and Briggs.2,​3,​4,​5

Recorded mastoid drainage dates from Rolianus (1671), followed by Petit (1774). The pain of the procedure probably dictated little more than a lancing or short incision. Drainage would have involved a proportion of cholesteatoma cases; these no doubt did worse than the non-cholesteatoma cases, but the earliest sources did not discern between cholesteatomatous or chronic infection conditions before the recognition of cholesteatoma in the 19th century. The modern era of mastoid surgery began with Wilde’s (1853) postaural incision and drainage. Without anesthesia, these were very likely the rapid but agonizing procedures of the time. Before Lister and the advent of antiseptic technique, many would have suffered surgical sepsis and its consequences.

Advances in other fields (pathology, microbiology, anesthesia, and antiseptic technique) permitted the more complex cortical mastoidectomy techniques. In 1873, Schwartze and Eysell were the first to publish an article describing the procedure of mastoidectomy, including the utilization of a chisel and hammer to remove bone. They also postulated clear indications for performing a mastoidectomy, including active infection and hearing loss as well as tinnitus, the surgical treatment of which was controversial.2 Despite this advance, cholesteatoma would have continued to cause problems until the underlying pathology became better appreciated; as such, mastoidectomy procedures of this era were primarily utilized to afford outward egress of pus.

Although likely first described by Duverney (in 1683), the term “cholesteatoma” was coined by Muller (1838), who noted the presence of cholesterol and fat in a tumor present in the ear. Much debate ensued in the 1800s as to the origin of this tumor in the ear canal. Several theories arose including dedifferentiation of bone cells (Virchow), direct extension of epidermal debris from the external auditory canal (Von Troeltsch), metaplasia of the middle ear mucosa (Gruber, Wendst, and Rokitansky), and others. At the end of the 19th century, Bezold and Habermann reached the conclusion, while examining pathologic specimens, that cholesteatoma could arise from skin migrating into the middle ear through a perforation and undergoing desquamation. Bezold also identified Eustachian tube dysfunction with resulting retraction pockets as a way for cholesteatoma to form.6

With a better understanding of cholesteatoma and chronic otitis media, the surgical aim of sac exteriorization arose and, with it, the development of “open” ear surgery as the radical mastoidectomy procedures of Kuester, von Bergmann and Zaufal, then Stacke (1888–90), in which the posterior canal wall was removed to permit drainage via the external canal. Subsequently, modified radical techniques, intending to preserve hearing by retention of some of the tympano-ossicular elements, emerged with the works of Bryant, Heath, and Bondy (1904–10). Variants of radical and modified radical mastoidectomy techniques remain in use today.7,​8 Despite the benefits of avoiding serious cholesteatoma-related morbidity and mortality, canal wall-down (CWD) procedures induced substantial alteration of normal anatomy. Resultant cavity symptomatology was often due to failure of another key function: epithelial migration. Split-skin (Thiersch)9 and full-thickness (Wolfe) grafts failed to correct cavity problems; they did not self-clean, and they were prone to chronic dermatitic degeneration.10 Canal wall-down surgery continued as the standard to the mid-twentieth century but progressively became more refined with the introduction of the operating microscope by Holmgren in 1923 and power drills.

Such refinement prompted the next phase of ear surgery that would endeavor to restore full ear function. This began with the introduction of “combined approach” canal wall-up (CWU) surgery by Jansen in 1958.11 Also termed intact–canal wall (ICW) surgery, this was directed at maintaining both anatomy and function. Concurrently developed in several American centers by surgeons such as Sheehy and Jako,12,​13 CWU surgery was designed to avoid the above cavity problems of the CWD procedures, but it was quickly recognized that CWU surgery had its own inherent problems of residual and recurrent cholesteatoma.14,​15,​16 In addition, continued Eustachian tube dysfunction often led to failure to achieve an aerated middle ear space.15 These drawbacks made the procedure controversial at its inception. The principle of staging the surgical procedure alleviated some of these concerns and led to wider acceptance.17 Despite improving outcomes, however, some surgeons remained skeptical and reverted to CWD procedures. The controversy between CWU and CWD procedures continues today.

With progressive focus on the function of the tympano-ossicular mechanism, the concept of tympanoplasty was introduced by Zollner and Wullstein in the 1950s, which not only addressed tympanic reconstruction by the application of skin grafts, but also further expounded on the “plastic technique” of shaping the external auditory meatus. This initial concept of tympanoplasty relied on principles of overlay grafting with skin grafts, a technique that was later refined by Sheehy in a form that is still utilized by some surgeons today as overlay or “lateral graft” tympanoplasty. Further development of tympanoplasty would explore the utility of other grafting materials. In 1958, Hans Heermann was the first to use temporalis fascia as a grafting material, which allowed placement of graft medial to the tympanic membrane in an underlay technique.

With the success of tympanoplasty came the advent of ossicular reconstruction to further rebuild the middle ear mechanism. Initially, various metallic and plastic implants were utilized. Results were promising, but poor long-term outcomes were achieved secondary to extrusion of implants. Autotransplantation of ossicles was the next step in the development of ossicular reconstruction. Removed ossicles were reshaped and reinserted to reestablish continuity. Incus transposition is a popular technique that is still used today,18 although preparation of the graft for reimplantation is often cumbersome and time-consuming.

In search of a more simple technique and improved results, Janeke and Shea, in 1975, reintroduced the use of alloplastic materials in the form of biocompatible prostheses (partial ossicular replacement prosthesis [PORP] and total ossicular replacement prosthesis [TORP]).19 Extrusion rates decreased when cartilage grafts were placed lateral to the prostheses.20 Over the past several decades, the materials used for prostheses have undergone a variety of changes.

Still often driven by advances in technology and in other medical fields, otologic surgery continues its development in modern times. Hybrid tympanomastoid surgical techniques, which consist of the removal of part of the canal wall for cholesteatoma dissection followed by replacement or reconstruction to ultimately provide CWU anatomy, are evolving rapidly. Techniques to obliterate CWD mastoidectomy cavities have also advanced to minimize many of the negative factors associated with an open cavity. The use of rigid fiberoptic endoscopes is an example of an innovation that has begun to serve as an adjuvant to CWU and mastoidectomy-sparing techniques.21 Advances in imaging, particularly MRI, have allowed the possibility of avoiding second-look surgery.22 Tissue engineering poses the potential for reliable tympanic membrane reconstruction via a simple office procedure. Perhaps the most significant surgical aim pertaining to the chronic ear that remains elusive is correction of the dysfunctional Eustachian tube; nevertheless, efforts in this field are ongoing. The next century will likely see development of new strategies and continued innovations of existing techniques to improve the results of chronic ear surgery.

Age is a well-recognized risk factor for otitis media. Younger children are more prone to otitis media due to the short length, small caliber, and horizontal orientation of their Eustachian tube. In addition to this anatomical disparity, children are more likely to have an immature immune system, making them more susceptible to viral and bacterial pathogens.24 Other risk factors include frequent upper respiratory tract infections, history of allergies, and family history of otitis media. Social and environmental influences are also important. These include exposure to smoking and day care attendance. Improvement of housing, hygiene, nutrition, and other social factors have shown to result in a significant decrease in prevalence of chronic suppurative otitis media in some societies.25

Several ethnic groups have been found to have a higher risk of developing otitis media and, consequently, going on to develop chronic suppurative otitis media. These include Southwestern American Indians, Australian Aborigines, Greenlanders, and Alaskan Eskimos.25

Otitis media has been examined heavily over the past several decades given that it is one of the most common diagnoses in primary care clinics worldwide. Its disease burden is pervasive; both developed and developing countries are affected. Studies examining the prevalence of the disease are usually population-based and, therefore, the overall prevalence is difficult to ascertain.

When reviewing the multiple population-based studies performed in the past several decades, it appears that several groups arise based on the prevalence rate of chronic suppurative otitis media. The populations with the highest prevalence (as mentioned previously) include Inuits (7% to 46%), Aborigines (12% to 33%), and Native Americans (4% to 8%), followed by populations in the South Pacific Islands (4% to 6%) and Africa (2% to 6%). A lower rate is found in the Asian and Middle Eastern countries (1% to 2%). The lowest prevalence rates occur in developed countries, including the United States, United Kingdom, Finland, Denmark, and Israel, all of which have prevalence rates of less than 1%.26

Fewer studies have examined the population prevalence of cholesteatoma. A study of patients in Iowa showed a prevalence of 0.01% and an incidence of 6 per 100,000.27 Interestingly, the prevalence rates of cholesteatoma are often the reverse of those for chronic suppurative otitis media and are often found to be more common in developed countries. This may be secondary to the neutral middle ear pressure provided by a chronic perforation. As one example, a study performed in Sierra Leone, where the chronic suppurative otitis media rate among a population of 2,015 children was 6.4%, found only one child with cholesteatoma.28

Several classifications of otitis media have been described. For several decades, an agreement on the consistency of definitions and terminology has been sought to standardize research efforts. The classification method most commonly used now relates to the timing of symptomology as well as the complications involved. Consequently, a great deal of overlap exists in the terminology used to refer to chronic ear conditions.

Chronic suppurative otitis media has been informally subtyped according to several unofficial indicators. Infection, for example, may be regarded as active, intermittent, or quiescent depending on the frequency and duration of otorrhea.30 A further division can also be made between a cholesteatomatous and non-cholesteatomatous chronic ear. Lastly, some surgeons have also classified COM as being predominantly tubotympanic (▶ Fig. 1.1), atticoantral (▶ Fig. 1.2), or mixed (▶ Fig. 1.3) in subtype. Tubotympanic chronic otitis media tends to be typified by disease of the pars tensa and mesotympanum, whereas atticoantral disease primarily involves the pars flaccida and epitympanum; however, this terminology is admittedly ambiguous and of uncertain utility. 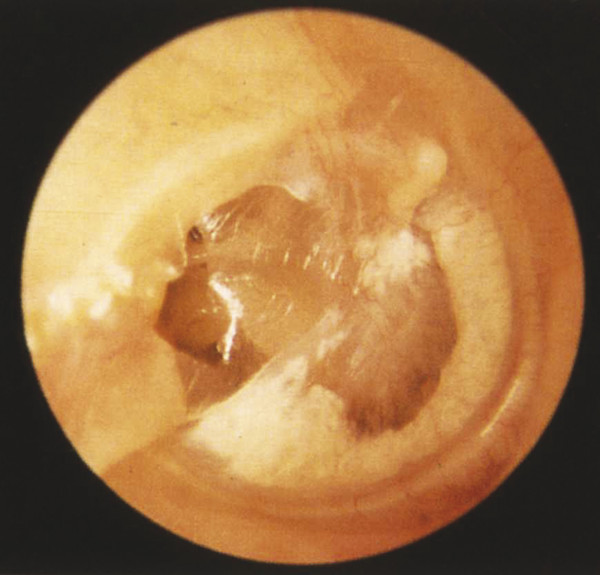 Fig. 1.1 Early tympanic membrane collapse invoving the pars tensa (Black Stage I). Limited posterior retraction into the mesotympanum and diffuse myringosclerosis are present. The pars flaccida is not involved. Pars tensa collapse such as this may progress to pars tensa cholesteatoma that originates within the posterior mesotympanum, having early involvement of the retrotympanum, most notably the sinus tympani. This collapse is commonly associated with ongoing Eustachian tube dysfunction.