Videos corresponding to this chapter are available online at www.expertconsult.com.

The use of cartilage in middle ear surgery is not a new concept; it has been recommended on a limited basis to manage retraction pockets for many years.1–5 More recently, the use of cartilage has been increasingly described for the reconstruction of large portions of the pars tensa of the tympanic membrane in cases of recurrent perforation, atelectasis, and cholesteatoma.6–8 Although one might anticipate a significant conductive hearing loss with cartilage because of its thickness and rigidity, several studies have reported results to the contrary, suggesting hearing results with cartilage to be no different than results with fascia.6–8 It has been shown in experimental and clinical studies that cartilage is well tolerated by the middle ear, and long-term survival is the norm.9–12 Cartilage grafts seem to be nourished largely by diffusion and become well incorporated in the tympanic membrane.3 Human and animal studies have shown that although some softening occurs with time, the matrix of the cartilage remains intact, but with development of empty lacunae, showing degeneration of the chondrocytes.13,14 The cartilage graft retains its rigid quality and resists resorption and retraction, even in the milieu of continuous eustachian tube dysfunction.

Two distinct techniques are commonly employed for cartilage reconstruction of the tympanic membrane: the perichondrium/cartilage island flap, which uses tragal cartilage, and the palisade technique, which uses cartilage from the tragus or cymba. The choice of technique is typically dictated by the specific middle ear pathology or, in cases where the tympanic membrane reconstruction is in conjunction with ossiculoplasty, the status of the ossicular chain. The palisade technique is preferred in cases of cholesteatoma, and when ossicular reconstruction is needed in the situation with the malleus present. In this situation, an exact fit is necessary to prevent cholesteatoma recurrence. The perichondrium/cartilage island flap is preferred for management of atelectatic ears and high-risk perforations. This chapter describes the two techniques in detail, followed by descriptions of modifications in response to specific surgical indications.

Generally, cartilage is used as a graft material in any ear considered to be at high risk for failure with traditional techniques using temporalis fascia or perichondrium. Included in this group would be high-risk perforations, atelectatic ears, and cases of cholesteatoma. High-risk perforation comprises a revision surgery, a perforation anterior to the annulus, a perforation draining at the time of surgery, a perforation larger than 50%, or a bilateral perforation, all of which have been shown to be associated with increased failure rates using traditional techniques.15,16 The atelectatic ear is one of the most important indications for cartilage tympanoplasty, and numerous reports have established its efficacy over fascia in this situation.1–3 For similar reasons, the use of cartilage to reconstruct and reinforce the scutum and posterior half of the eardrum in cholesteatoma surgery has reduced the incidence of recurrent atrophy and retraction pockets in these difficult cases.

As part of the preoperative preparation, all patients are encouraged to perform the Valsalva maneuver (or use the Otovent [Invotec International, Jacksonville, FL] in younger children). Patients unable to insufflate the ear are placed on nasal steroids 6 weeks before surgery, and these are continued in the postoperative period until an aerated middle ear cleft is documented. Although we have found no difference in graft take between patients who can and cannot perform the Valsalva maneuver, we have found a slightly increased need (7%) for postoperative tube insertion in the Valsalva-negative group. Likewise, an attempt is made to optimize concomitant sinonasal disease (allergy, chronic sinusitis) before ear surgery, and smoking cessation is encouraged where applicable. The draining ear is treated with antibiotic/steroid-containing topical solutions and aural toilet for 6 to 8 weeks before surgery. Although every attempt is made to dry an ear before surgical intervention, it is not considered a prerequisite for tympanoplasty.

The surgical approach for cartilage tympanoplasty does not differ from the approach for traditional otologic surgery and is dictated by the extent and location of the disease. The postauricular approach is used in most patients because these cases, by definition, tend to have more extensive middle ear pathology. A small, localized, posterior retraction or perforation can be performed through a transcanal or endaural incision, but great care must be taken to ensure that the depths of the retraction can be reached. Likewise, the placement of the cartilage graft uses the underlay technique, so no special tympanomeatal flaps or skin incisions are required.

Some general observations should be made regarding the differences in cartilage that occur with aging. The cartilage thickness of the tragus and cymba are not appreciably different between children and adults, but the perichondrium seems to be more adherent in children. For this reason, when the perichondrium is removed from one side when fashioning the graft (described later), care must be taken to ensure the correct plane is dissected, especially in children. Likewise, cartilage is more pliable in children, making it slightly easier to work with than adult cartilage, which can become brittle in patients older than 65 years. For this reason, during the fashioning of the graft, it is generally a good practice to manipulate and hold the cartilage with fingers instead of forceps, and toothed forceps should never be used to grasp the cartilage to avoid fracture.

The general technique of reconstruction using the perichondrium/cartilage island flap begins with harvest of the cartilage from the tragal area (see Video Clip 10-1).21 This cartilage is ideal because it is thin, flat, and in sufficient quantities to permit reconstruction of the entire tympanic membrane. The cartilage is used as a full-thickness graft and is typically slightly less than 1 mm thick in most cases. Although it has been suggested that a slight acoustic benefit could be obtained by thinning the cartilage to 0.5 mm,22 this advantage is offset by the unacceptable curling of the graft, which occurs when the cartilage is thinned, and perichondrium is left attached to one side.

An initial cut through skin and cartilage is made on the medial side of the tragus, leaving a 2 mm strip of cartilage in the dome of the tragus for cosmesis (Fig. 10-1). The cartilage, with attached perichondrium, is dissected medially from the overlying skin and soft tissue by spreading a pair of sharp scissors in a plane that is easily developed superficial to the perichondrium on both sides. It is necessary to make an inferior cut as low as possible to maximize the length of harvested cartilage. The cartilage is grasped and retracted inferiorly, which delivers the superior portion from the incisura area. The superior portion is dissected out while retracting, which produces a piece of cartilage typically measuring 15 × 10 mm in children and larger in adults. 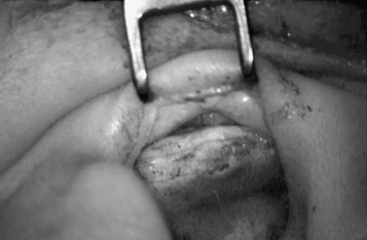 The perichondrium from the side of the cartilage farthest from the ear canal is dissected off, leaving the thinner perichondrium on the reverse side. A perichondrium/cartilage island flap is constructed in the following manner. Using a round knife, cartilage is dissected from the graft to produce an eccentrically located disc, approximately 7 to 9 mm in diameter, which is used for total tympanic membrane reconstruction. A flap of perichondrium is produced posteriorly that eventually drapes over the posterior canal wall. A complete strip of cartilage 2 mm wide is removed vertically from the center of the graft to accommodate the entire malleus handle (Fig. 10-2). The creation of two cartilage islands in this manner is essential to enable the reconstructed tympanic membrane to bend and conform to the normal conical shape of the tympanic membrane. When the ossicular chain is intact, an additional triangular piece of cartilage is removed from the posterosuperior quadrant to accommodate the incus. This excision prevents the lateral displacement of the posterior portion of the cartilage graft that sometimes occurs because of insufficient space between the malleus and incus. 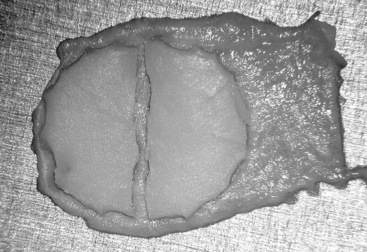 The entire graft is placed in an underlay fashion, with the malleus fitting in the groove and pressing down into and conforming to the perichondrium (Fig. 10-3). The cartilage is placed toward the promontory, with the perichondrium immediately adjacent to the tympanic membrane remnant, both of which are medial to the malleus. Failure to remove enough cartilage from the center strip causes the graft to fold up at the center instead of lying flat in the desired position. Likewise, if the strip is insufficient, the cartilage may be displaced medially instead of assuming a more lateral position in the same plane as the malleus. 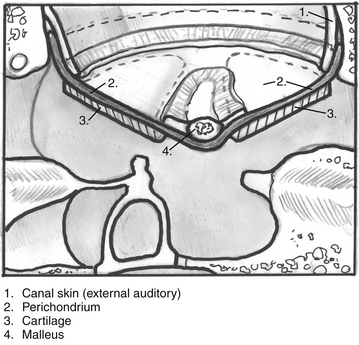