As mentioned in Chapter 36, there has been a trend in the development of hybrid techniques that combine the advantages of canal wall-down and canal wall-up surgery for cholesteatoma. Many of these techniques start by following the disease from its origin in the epitympanum into the mastoid by drilling the posterior canal wall in a retrograde or in-out type fashion. If the mastoid is sclerotic, the resulting small open cavity is an excellent solution and reconstruction of the middle ear is undertaken. However, in situations where there is a well-aerated mastoid, the canal wall-down procedure may result in a large cavity with many postoperative care problems, so reconstruction of the canal wall is undertaken in these situations.

To reach the goal of anatomical and functional reconstruction of the canal wall after safe cholesteatoma removal, the use of biomaterials in many cases is necessary. There are several options, including cortical bone, reimplanted posterior canal wall, cartilage, and alloplastic materials. In theory, a patient’s own tissue should be the best material for reconstruction, and, originally, the reimplantation of the temporarily removed posterior wall or the use of cortical bone seemed to be adequate. However, because of the nutritional requirements of the devascularized bone, the results of bony reconstruction were not encouraging.

Due to its bradytrophic nature, cartilage has been used in all types of tympanoplasty reconstructions and is a well-established tissue for the reconstruction of the posterior wall. Excellent wound healing is possible, even under adverse situations, because of cartilage’s low needs for nutrition. However, the adhesion forces in the diseased middle ear can cause it to retract into the cavity, so combining it with other alloplastic materials is being investigated, including cements such as hydroxyapatite (HA)1 and ionomeric cement,2 solid ceramic cements,3,​4 and metals such as titanium. The latter can be formed into a “cage” and combined with cartilage plates for reconstruction.5

This chapter highlights the advantages and disadvantages of these biomaterials (see Chapter 8 for a further discussion), while featuring a technique of canal wall reconstruction using the titanium mesh cage.

The hybrid bone substitute ionomeric cement is derived from its application in dental medicine. This is a glass-based material that is available in a preformed design, but it is also available as a moldable consistency for the reconstruction of the posterior canal wall. This material has an excellent compatibility with bone,2 but epithelialization is problematic. Even if the cement is covered with a soft tissue (Palva) flap, a high rate of nonepithelialized posterior wall results. Thus, a failure rate in up to one-third of patients has occurred, and the recommendation for this material was reduced for selected cases only.2

Pure HA is a demineralized bone matrix that has been used as a material for ossicular replacement prostheses since the 1980s. Two types are in use: high-density HA and regular HA. Preformed canal-shaped implants are individually adapted using the drill.3 Also nonrigid implants have been used, which are composite flexible HA sheets consisting of a polymer in combination with HA.6 For epithelialization purposes, periosteal flaps or temporalis fascia flaps have been proposed.7,​8 Proper epithelialization could be achieved in 60% to 80% of patients.9,​10 Histographic studies in animals showed no inflammatory response or foreign body reaction using HA cement.1 Micrographic scans of explanted specimens in humans showed biodegradation by osteoclasts. In an experimental setting, demineralized bone matrix that naturally consists of HA was used for mastoid obliteration and posterior canal wall reconstruction. Wound healing was uneventful, but the material was not rigid enough to withstand retraction and adhesive forces.11

Bioactive glass ceramic was first introduced as biomaterial for ossicular replacement prostheses. The material has good body acceptance but is degraded by osteoclasts and macrophages, causing instability in ossiculoplasty. In a series of 20 patients with a posterior wall reconstructed with bioactive glass ceramic, four patients suffered from consistent otorrhea, leading to the removal of the material.4

Mersilene (Ethicon, Inc., Cincinnati, Ohio) is a polyester nonabsorbable fiber suture that has been used in a net configuration for reconstruction of the posterior canal wall. Proplast, a combination of carbon fibers and polytetrafluoroethylene, is a stable material with a porous surface designed to help connective tissue ingrowth, which should help to integrate the material. However, both of these materials have shown low tissue integration rates, and healing disturbances were reported in 30% to 50% of patients. Histological studies showed a high number of giant foreign body cells as obvious signs of non-acceptance.12,​13

Titanium, with its tissue interactive surface of titanium dioxide, is a well-known material widely used in osteosynthesis and for replacement of bone. It has seen wide usage for construction of artificial joints in orthopedic surgery. Because of its stability and the possibility of creating delicate structures, it is an excellent material for ossicular replacement prostheses. In addition, due to its demonstrated biocompatibility,14 titanium has gained popularity for canal reconstruction in the form of solid plates15 and in mesh form.16

Titanium has also been combined with HA for reconstructing the posterior canal wall. A titanium net covered with a porous HA coating was fixed with screws to the mastoid tip and zygomatic root. In a small number of patients, good results could be achieved.17

The desire to restore the original anatomical situation by reconstructing the posterior wall and, to some extent, the mastoid cell system, led to the concept of the titanium cage. Titanium mesh is bent to form a cage-like structure to imitate the mastoid cells and to stabilize and support the posterior meatal wall. This cage is placed in the antrum and mastoid and additional fixation is not necessary. The cage is covered with cartilage plates and chips. Nutritional support reaches the cartilage through the openings of the cage. Wound healing and epithelialization are shown to be uneventful. The advantage of the cage over a pure canal seems to be the anatomical restoration of the mastoid. Wound healing disturbances have not been observed.5

Patients with cholesteatoma in a well-pneumatized mastoid are candidates for mastoid reconstruction with the titanium cage as are patients who failed primary cartilage reconstruction of the posterior wall because of massive adhesion or cartilage retraction. Cholesteatoma in a poorly pneumatized mastoid should be treated with an open cavity technique as a first choice.

Canal wall reconstruction using the titanium mesh cage begins with a postauricular incision for exposure of the mastoid and external bony canal wall. The middle ear is entered and the ossicular chain is examined and disarticulated if still intact. The growth pattern of the cholesteatoma is noted. A canalplasty is performed until the mastoid air cells are just visible through thin bone and drilling is then commenced in the posterior-superior direction, following the cholesteatoma back from the middle ear into the aditus ad antrum and mastoid. Drilling is continued until the back edge of the cholesteatoma is seen or cholesterol granuloma is encountered behind the sac.

Initially, reconstruction of the posterior canal wall was performed with cartilage plates supported by a titanium total ossicular replacement prosthesis (TORP) acting as a scaffolding. Because of some failures due to collapse of the cartilage reconstruction into the mastoid cavity, the technique was changed by reinforcing the cartilage reconstruction with titanium mesh. A 1-mm thick titanium mesh (Synthes Corporation, Tuttlingen, Germany) is used to build a size-adapted cage to rebuild the posterior canal wall, including the mastoid (▶ Fig. 40.1). The major part of this cage is created to support and stabilize the soft tissue reconstruction of the posterior wall. Other parts are bent as “legs” that are placed within the cavity (▶ Fig. 40.2). Thus, the titanium cage is rigid enough to keep a space open for aeration, while allowing passage through the antrum. 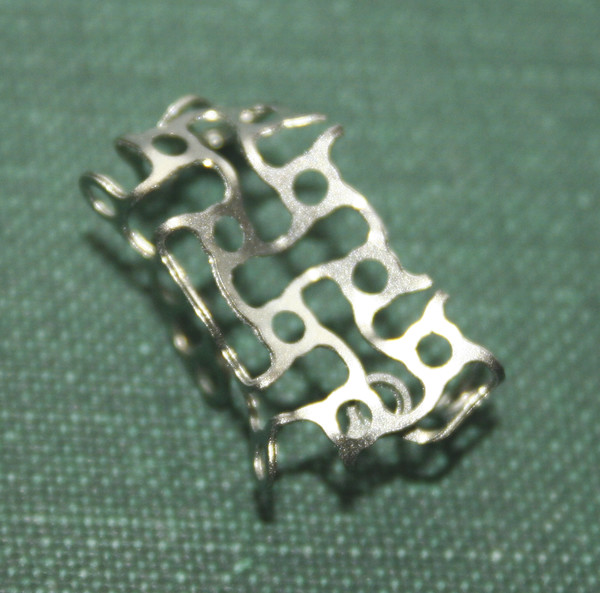