Tumors and Tumor-Like Lesions of the External Ear

12 Tumors and Tumor-Like Lesions of the External Ear

The auricles form part of the composite of facial structures, and are an important part of human physiognomy. Surgery in this region therefore has a considerable impact on an individual’s aesthetic appearance. All of the aspects discussed in relation to malformations of the ear in Chapter 6 are therefore also implicitly applicable to tumor operations in the pinna and its vicinity. Based on our philosophy of restoring as much normality in function and form as possible, we have added a few specific principles in the surgical techniques we use, which may differ considerably from the rules of general tumor surgery:

Benign lesions of the auricle (Table 12.1) are rare, but can occur throughout life, from earliest childhood to old age. It is not always easy to assess whether or not they are malignant from their appearance alone.

Congenital hemangiomas, which sometimes present as mixed hemangiolymphangiomas, are the most frequent benign lesions of the external ear. These often develop in continuity with other facial hemangiomas, or disseminate from them. Their growth pattern may be flat and cicatricial, or it can have a verrucose, racemose, or even nodal form (Fig. 12.1). Some congenital hemangiomas grow very slowly, remaining stationary for years, but others show rapid expansion and can be histologically aggressive, with infiltration into cartilage or bone without a capsule. It is a common experience that prominent congenital hemangiomas, which have a very threatening appearance in newborns, flatten and become pale after a few months. Corticoid administration has proved valuable in encouraging spontaneous resolution.

For these reasons, the treatment approach in children is staged. Taking a precise patient history helps identify the spontaneous course of the lesion. Observing the lesion for a period, with check-ups at three-week intervals, provides evidence of growth, standstill, or resolution. During this period, otopediatric corticotherapy is administered. If the lesion remains stationary, surgery is postponed until the patient is 16, after puberty. In cases of marked aesthetic disturbance, argon laser irradiation can be used. The hemangioma can be dried out and rendered practically invisible with cautious, repeated laser exposure. If the lesion is situated at the pinna, however, there is a risk of heat necrosis of the underlying cartilage.

Another alternative is instillation of magnesium seeds into the hemangioma, as recommended by Staindl (1989, 1991) for facial hemangiomas. We have had excellent results with this form of treatment for large hemangiomas of the lip and tongue, but have no experience with it at the pinna. Cryosurgery has also proved successful in arresting marked growth of hemangiomas.

As soon as fast, aggressive growth is observed, surgery becomes necessary. In adults, spontaneous resolution of a hemangioma is unlikely. If the patient complains that the lesion has an unattractive appearance or is growing noticeably, active treatment is indicated. An initial attempt can be made with argon laser therapy, but if the lesion is situated over thin cartilage, it is better to resect it and carry out subsequent dermatoplasty. The principles of this procedure are identical for the different types of benign lesion. An attempt at preoperative embolization is justified for large hemangiomas, but this is often unsuccessful due to the multiple vascular supply. Excision of the tumor is carried out under local anesthesia; endotracheal anesthesia may be necessary with large tumors. Ultrasound or magnetic resonance imaging (MRI) should be used to identify the borders of the lesion if there is any suspicion of parotid gland involvement. For example, a thick extension may reach deeply into the glenoid fossa, compromising the temporomandibular joint. Trismus can therefore be a presenting symptom. 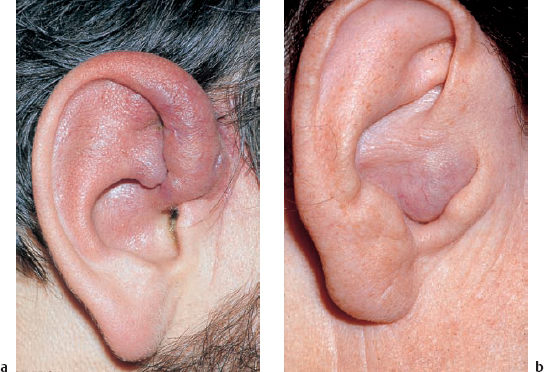 Fig. 12.1 Hemangioma of the pinna. a A diffusely growing lesion at the superior root of the helix, infiltrating the adjacent temporal skin without sharp margins. Treatment options include: embolization, cryosurgery, or excision and dermatoplasty. b A cavernous-type hemangioma occluding the external auditory canal. Surgical removal was indicated.

A circular or oval incision is made in the overlying skin, without leaving a broad margin. In rare instances, the skin can be dissected from the tumor along a clean cleavage plane, but in most cases it has to be sacrificed, as it is atrophic and involved with the lesion. Using a sharp no. 15 scalpel and a semisharp dissector, it should be possible to encircle the hemangioma along a healthy cleavage plane and remove it completely. Constant forward destruction of the lesion using bipolar electrocoagulation is helpful for this maneuver. The resulting skin defect is immediately closed using a free full-thickness graft from the ipsilateral or contralateral postauricular fold (Fig. 12.2). If it is doubtful whether the graft will take, or when the conchal cartilage has been sacrificed, a postauricular, inferiorly pedicled skin flap is pulled through to the anterior conchal surface (Fig. 12.3).

Other benign neoplasias, such as histiocytomas or papillomas, or tumor-like lesions such as keratoacanthomas or cysts, are treated in the same way. These are more frequently situated at the meatal entrance or in the external auditory canal (Fig. 12.4). In such cases, excision is carried out under the microscope. The resultant skin defects can be closed with split-skin grafts here, or can be covered with pedicled pretragal skin flaps, using the methods described in Chapter 6.

Postauricular osteomas with asymptomatic growth may become remarkably large before a patient presents for relief of pain when wearing glasses, or simply for aesthetic reasons. Osteomas begin to grow in the external mastoid cortex, but they can penetrate the pneumatization and can encase the sigmoid sinus and cerebellar dura. High-resolution computed tomography (CT) can delineate the borders of the lesion and help in the planning of a definitive resection. Figure 12.5 shows an example of the appearance and of the postauricular exposure after a skin incision along the hairline, with formation of an anteriorly pedicled periosteal flap. In this case, the mastoid bone had to be taken down to the sigmoid sinus. 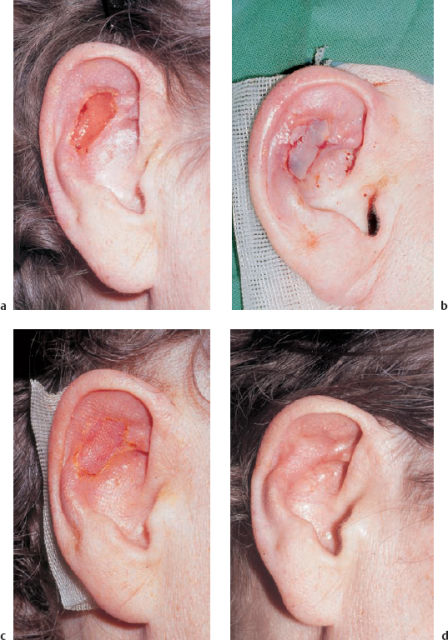 Fig. 12.2 Closure of a small anterior conchal defect using a free graft of thin postauricular skin, glued onto the perichondrium with fibrin tissue adhesive (Tissucol). a The defect. b The skin graft glued into the defect c On the first postoperative day, the glued graft already has a blood supply. d Three weeks postoperatively. 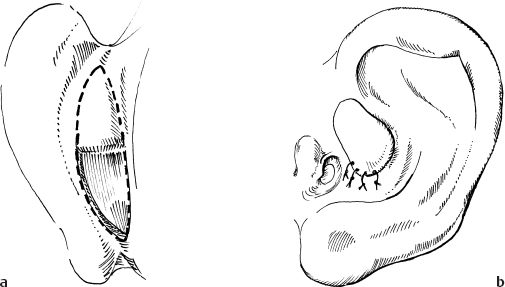 Fig. 12.4 Benign tumors of the conchal fossa. a A verruca resembling a basal cell carcinoma. b Sebaceous adenoma. c Papilloma. 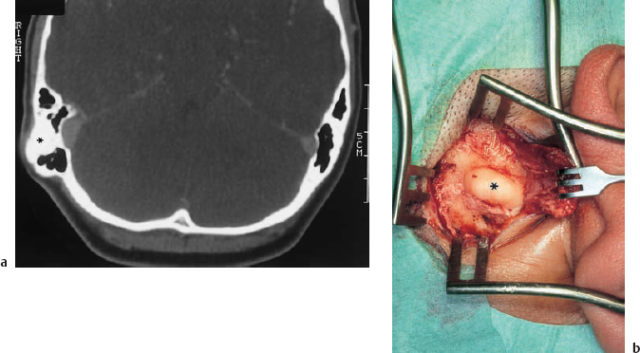 Fig. 12.5 Postauricular osteoma. a Computed tomography shows deep expansion into the mastoid. b Exposure of the tumor (*) after a curved skin incision at the hairline, with retraction of an anteriorly pedicled periosteal flap.

Exostoses of the External Auditory Canal

Exostoses of the external auditory canal are not really neoplasias or osteomas, but belong to the group of tumor-like lesions. When specimens undergo histopathological examination, they are always classified as “normal bone.” It is thus apparently not possible to differentiate between local exostosis and adjacent tympanic or mastoid bone. There is a broad consensus in the literature that the tissue represents reactive bone hyperplasia.

The pathogenesis is unanimously ascribed to exposure of the ear canal skin to low-temperature water, which apparently provokes an osteoblastic reaction in the meatal periosteum. Neither warm water nor dry coldness are capable of stimulating this hyperactivity in the same way. There may be some inherited individual sensitivity, but this is not dominant. Eysholdt (personal communication, 1996) carried out otoscopic examinations of members of wild-water canoeing clubs in California and in Yugoslavia. About 50% of the active club members had bilateral formation of exostoses of different sizes. The lower incidence of exostoses among the Californian canoeists in comparison with the Yugoslavian group was attributed to the marked difference in the average water temperature (lower in Yugoslavia and higher in California). Chaplin and Stewart (1998) recently reported similar observations in surfers. A review of our own series of 27 patients who underwent surgery shows that all of the patients had been frequent swimmers during adolescence, and that the lesions had a characteristic local appearance.

Smaller, presumably incipient, exostoses were located around Shrapnell’s membrane. These small, whitish humps might easily be misdiagnosed as initial cholesteatomas (Fig. 12.6a), but gentle palpation under the microscope in the office will reveal the osseous nature of the prominence. In the advanced stages, three main sections of the circular process can be identified: there is a large posteroinferior hump, with a smaller posterosuperior protuberance and a broader anterior one (Fig. 12.6b). A distinction is made in the literature between medial and lateral exostoses (Fig. 12.7). These types are occasionally apparent, but they have no clinical significance. In rare instances, a medial tubercle may impinge on the tympanic membrane, displacing it into the tympanic cavity. 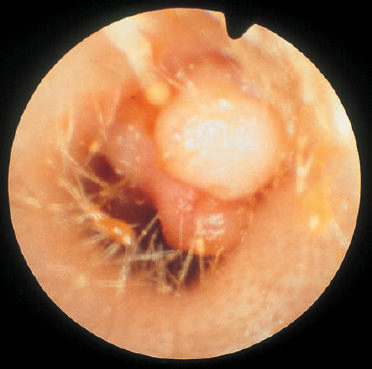 Exostoses of minor or moderate size do not cause any symptoms. The physiological self-cleaning mechanism of the meatal skin, created by the lateral migration of its epithelium, remains undisturbed, and air conduction continues to be normal until there is occlusion of the last 2–3 mm of the diameter and the transport of squamous detritus becomes critical. The debris is soaked by water, so that hearing is impaired after a bath or shower and there is a subjective sensation of having a full ear. Repeated ear eczemas can also be caused, producing itching or even pain. Otoscopy reveals the cause, with the typical appearance of partial or complete obstruction of the external auditory canal and an almost invisible drumhead (Fig. 12.6b


Tags: Restitutional Surgery of the Ear and Temporal Bone
Jun 14, 2016 | Posted by admin in OTOLARYNGOLOGY | Comments Off on Tumors and Tumor-Like Lesions of the External Ear
Premium Wordpress Themes by UFO Themes
WordPress theme by UFO themes