The orbital venous system is complex, highly variable, and confusing. In the orbit, unlike other parts of the body, there is no direct correspondence between the arteries and veins, except for the superior ophthalmic vein which has some correspondence with the ophthalmic artery. Also, the orbital veins, unlike the orbital arteries, have a highly variable and inconstant pattern and formation of venous networks at several places, resulting in marked uncertainty and controversy as to their number, nomenclature, and pattern. The latest detailed studies on the orbital venous system are those of Henry [1] and Cheung and McNab [2].
The orbital veins can be divided into two categories: (1) main veins and (2) inconstant veins.

Main Orbital Veins
Superior ophthalmic vein: This is the largest orbital vein and is the principal route of orbital venous drainage. Anteriorly at the superomedial corner of the orbital margin, it is usually formed by the union of two veins – the supraorbital and angular – just posterior to the trochlea [2]. It runs posteriorly along with the ophthalmic artery and leaves the orbit through the superior orbital fissure to join the cavernous sinus. Therefore, like the ophthalmic artery, its intraorbital course can be divided into 3 parts (see Chap. 1). Main venous tributaries draining into it include the medial palpebral, superior vortex, anterior ethmoidal, lacrimal, central retinal, muscular, and inferior ophthalmic veins. Brismar [3], on orbital phlebography, has described the anatomy and variations of the superior ophthalmic vein. Its pattern on orbital phlebography has been used for diagnosis of orbital mass lesions; however, Brismar [3] cautions that since the pattern is not symmetrical between the two orbits, care must be taken in the diagnosis of space-occupying orbital lesions from the venous asymmetries.
Inferior ophthalmic vein: This usually originates at the anterior, medial part of the orbital floor, from a venous network draining the lower lid, lacrimal sac region, inferior vortex veins, and inferior rectus and oblique muscles. In most cases, the vein runs posteriorly close to the orbital floor on the surface of the inferior rectus muscle, to join either the superior ophthalmic vein or the cavernous sinus directly [4].
2.

Anterior Collateral Vein: This runs along the medial wall of the orbit, connecting the anterior medial network at the orbital floor and the angular vein.
(ii)

Medial Collateral Vein: This is situated between the eyeball and medial rectus, connecting the anterior medial network at the orbital floor and the superior ophthalmic vein.
(iii)

Lateral Collateral Vein: This lies on the lateral side of the muscular cone, connecting the inferior venous network and the lacrimal vein.
(iv)

Posterior Collateral Vein: This is located in the posterior part of the orbit, connecting inferiorly located orbital veins and the superior ophthalmic vein.
On orbital phlebography, Brismar [3] found an anterior collateral vein in 91 % of eyes, medial in 97 %, lateral in 72 %, and posterior in 19 %.
Cheung and McNab [2] divided the orbital venous system essentially into superior and inferior orbital venous systems, with superior and inferior ophthalmic veins, respectively, comprising the two, with several variations. They described the presence of only two collateral veins – medial and lateral, connecting the superior and inferior venous systems.
Apart from those, there are orbital venous networks. Among them, the most widespread one is the inferior venous network, which has been further subdivided into an anteroinferior network, located in the muscle cone, and a posteroinferior network [1]. A superior network, located above the superior rectus and levator muscles, has also been described.
Apart from the above, there are named venous tributaries of the main veins; these include the palpebral, vortex, lacrimal, muscular, ethmoidal, and central retinal veins. The central retinal vein, which drains blood from the retina and optic nerve, may join the superior or sometimes the inferior ophthalmic vein, or even the cavernous sinus directly. In my study [6], I found that the central retinal vein, after emerging from the optic nerve, may run for some distance in the substance of the dural sheath. The development of optic nerve sheath meningioma at or near the site of exit of the central retinal vein from the sheath results in a gradual occlusion of the central retinal vein, and that may cause the development of typical retinociliary collaterals on the optic disc – a well-known sign of optic nerve sheath meningioma.
The intraorbital veins have multiple communications with the surrounding extra-orbital veins, e.g., anteriorly with the facial and frontal veins, posteriorly with the cavernous sinus, inferiorly with the pterygoid plexus, and medially with the nasal veins via the ethmoid veins. 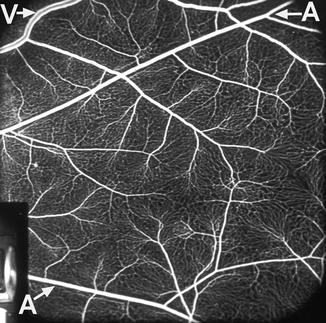 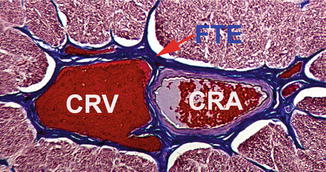 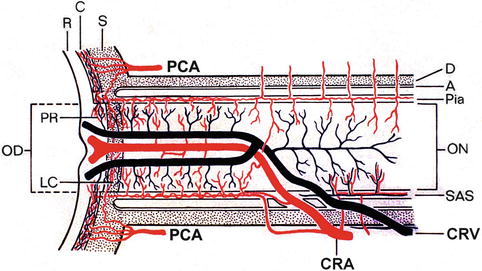