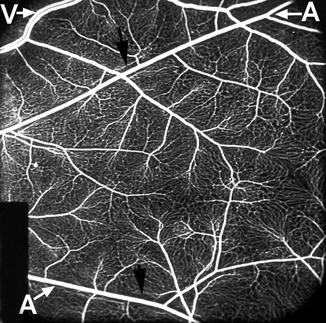 Fluorescein fundus angiogram, during arteriovenous phase, shows main retinal vessels and retinal capillary network. A retinal arteriole, V retinal vein. Note alternating pattern between the arterial and venous vessels. Black arrows indicate capillary-free zone by the side of the retinal arteriole (Reproduced from Hayreh [13])
According to Michaelson and Campbell [3], this basic pattern of two layers is modified at other places. Retinal precapillaries are of arterial and venous types, and the venous ones have much larger caliber than the arterial ones. Following is the modification in the basic two-layered retinal capillary network pattern.

Posterior Retina: The retinal capillary network is most modified in the posterior, thicker part of the retina. There is no change in the deeper layer. However, the superficial layer becomes two layers, so that there is a three-layered pattern in this region which is particularly well developed in the macular region.
2.

Around the Optic Disc: Where the nerve-fibre layer is thick, an additional, most superficial, and extremely dense net of close-set, radially arranged capillaries appears (Figs. 8.2 and 8.3). Precapillaries and capillaries in this layer lie on the surface of the nerve fibre layer. This network is the densest of all those in the retina. Therefore, in this central zone there are four capillary networks at four different levels: (1) the most superficial peripapillary radial network, lying in the superficial part of the nerve-fibre layer, (2) the superficial network in the deeper part of the nerve-fibre layer, (3) the reduplication of the superficial network at the inner border of the inner nuclear layer, and (4) the deep network at the outer border of the inner nuclear layer. The peripapillary radial net extends on the nasal side for 4 mm from the optic disc and on the temporal side for 7 mm. It circumvents the macula, so that its lateral margin is deeply indented, and in the horizontal plane, it only extends 2 mm lateral to the optic disc. Michaelson and Campbell [3] called these radial peripapillary capillaries (see below radial peripapillary retinal capillaries).

Fluorescein fundus angiogram, during arteriovenous phase, shows the peripapillary radial retinal capillaries and their origin on the optic disc
3.

The Foveal Region: In 1874, Samelsohn [14] and Nettleship [15] reported that the fovea normally is without vessels (Figs. 8.2, 8.4, and 8.5). According to Nettleship [15], that area is equal to about 1/4,200 square inch and is irregularly oblong. Michaelson and Campbell [3] also reported that this has no vessels and that the area varies from 0.4 to 0.5 mm in diameter (according to them, this agrees with the generally accepted view of Leber [2]). 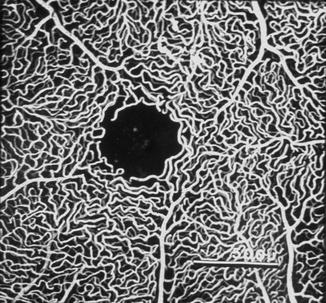 A cast of retinal capillaries in the macular region of a monkey showing the foveal avascular zone in the center (Produced by courtesy of Professor Koichi Shimizu)
4.

Retinal Periphery: From the optic disc, the two layers of the retinal capillary network extend peripherally for 11.5–14.5 mm – maximum in the horizontal temporal region and least in the inferomedial region. Toward the periphery the capillary mesh becomes wider and the periarterial space increasingly prominent. Finally, the two-layered pattern becomes intermittent, with the deep network present only around the veins. At the extreme periphery the deep network disappears completely, and there is only one layer of wide mesh and wide caliber capillaries. The peripheral margin of the retinal vascular system, about 1 mm behind the ciliary body, has wide caliber capillary arches joining the terminations of the arteries and the veins. There are no blood vessels in a narrow peripheral zone of the retina.
Michaelson [4, 5] showed that the formation of retinal capillaries is preeminently a function of the retinal veins and that if a vein and an artery are close to each other, growth takes place predominantly from the side of the vein remote from the neighboring artery. He pointed out that the capillary-free zone exists around the arteries, both in the immature and in the mature retina. To Michaelson these anatomical facts were clearly associated with each other and suggested to him the presence in the retina of a vasoformative factor. Campbell [6] tested the hypothesis by placing one-day-old rats in a low-pressure environment and found that the capillary-free zone around the arteries became significantly narrower than in control animals. The converse of this finding is that raised oxygen tensions lead to widening of the capillary-free zone. Ashton et al. [16] evaluated the effect of hyperoxia on the retina of the kitten. They stated that vasoformative factor arises in areas of lower oxygen tension, but not in areas of higher oxygen tension. According to Ashton [17], thus, it becomes apparent why vessels invade the developing retina at the 100-mm stage; why growth is predominantly on the venous side; why there is a periarterial capillary-free zone; and why vessels never transgress, despite the absence of an anatomical barrier, the macula, the outer layers, or the periphery of the retina which are adequately oxygenated from the choriocapillaris. He discovered in experiments on the kitten that oxygen in high concentrations can produce a partial or total obliteration of the retinal vessels in the immature eye [18]. It commences as a marked constriction of the arteries and arterioles; the arterioles and arteriolar side of the capillary circulation are the first vessels to be obliterated; this is followed by disappearance of the entire capillary bed; then the main arteries and finally the main veins close, leaving an apparently avascular retina. In general, this process begins peripherally and spreads posteriorly, the disc region being the most resistant and the last area to be completely obliterated. This phenomenon is confined to the growing retinal vessels, occurring neither in the other vessels of the eye nor in those of other organs [16, 19].
Kuwabara and Cogan [8] reported that human retinal arteries show side-arm and dichotomous branching that appears to serve the massive capillary plexus posteriorly and the sparser capillary plexus anteriorly with an equal head of pressure. The capillary walls have both endothelial and glial cells incorporated within them and are occasionally connected by strands, which they called intercapillary bridges. With age the cellular population decreases, especially toward the retinal periphery where some loops eventually show complete loss of cells. The periphery of the human retina also contains spider-like bodies, which have processes surrounding the vessels. The acellularity and spider-like processes may be related to peripheral cystoid degeneration.
Toussaint et al. [9] reported that the capillary and precapillary branches of superficial horizontal retinal arteries and veins plunge precipitously into the retina, often at nearly right angles to the surface of the retina. The retinal capillaries have a relatively thick basement membrane. Like Michaelson and Campbell [3], they described areas of the retina which have distinctive vascular patterns, but unlike the four areas reported by Michaelson and Campbell [3], they divided them into the following three areas:

Peripapillary Area: Capillaries in this region apparently come from the optic disc and, according to them, probably correspond to the two most superficial layers reported by Michaelson and Campbell [3]. These capillaries follow the course of the nerve fibers, forming a double Bjerrum arc. They differ from the capillaries elsewhere in the retina as being long and approximately parallel. They do anastomose with each other, and to some extent with the deeper vessels, and pass over the veins without interruption (see below radial peripapillary retinal capillaries).
B.

Macular Area: The capillaries about the macula form arcades, divide, and subdivide at all levels of the retina. In the perimacular region, the capillary plexus is especially dense, but rapidly becomes less dense toward the macula, eventually disappearing altogether to form a central avascular zone of less than 0.5 mm in diameter.
C.

Peripheral Retina: Toward the periphery, as the retina becomes thinner, the capillary meshwork also becomes much less dense.
Kuwabara et al. [10] reported the effect of age on the retinal capillaries. According to them, age produces the following three types of change:

Diffuse Acellularity: The most characteristic index of aging was widespread loss of cellularity. It is a constant occurrence in the peripheral capillaries of old people and is often found in otherwise normal persons as early as 50 years. It was manifested first by a loss of endothelial cells.
2.

Individual Capillary Acellularity: In this there is a loss of cells from single capillaries in the posterior or equatorial retina. It is seen relatively frequently in persons of 50 years or over and is not known to be associated with any visual complaint nor with any systemic disease.
3.

Cluster Acellularity: In this there is a loss of cells from a group of capillaries in one localized area supplied by a single arteriole. It is not uncommon in senile eyes.
Schellini et al. [20] reported age-related morphologic, ultrastructural, and morphometric changes in the capillaries of the superficial and deep plexuses of the rat retina. Their study suggested that age-related morphologic alterations start occurring in the retina of rats at about 12 months of age. Increased glycogen deposits, pinocytotic vesicles, residual bodies, and cell debris were observed in both the endothelial and pericytic cells of 12- and 15-month-old animals. In addition, heterogeneous osmiophilic accumulations, and electron-transparent spaces were observed in the basement membrane as well as projections of the basement membrane toward the neighboring cells. Morphometric examination of the two vascular plexuses studied did not show differences in the area of the endothelial or pericytic cells, basement membrane, or vascular lumen between rats of different ages.
Powner et al. [21] investigated basement membrane changes in capillaries of the aging human retina. They reported changes in capillary basement membranes at the vessel-glia interface in all samples, from both the normal and diseased cases. They concluded that vacuoles in the basement membrane are a normal feature of adult human retinal capillaries and do not indicate disease. Their incidence increases with age and might be a contributing factor to late-onset pathologies of the retinal vasculature.
The wall of the retinal capillaries consists of endothelial cells, pericytes, and basement membrane. Their diameter varies from 3.5 to 6 μ. The endothelial cells have tight-cell junctions, which exercise a blood-retinal barrier, as discussed in Chap. 9.
Cogan [12] discussed at length the chronologic sequence of the development of the retinal vasculature during fetal, infantile and childhood, mature, and senescent periods.

These retinal capillaries in man were first reported by Michaelson and Campbell [3] and Michaelson [4] (see above) and later by Toussaint and others [9]. Henkind [22–24] investigated them further. He found that these capillaries are present in man, monkey, cat, pig, and species with maculae and have the following characteristic features, which distinguish them from other retinal capillaries:

They are limited in distribution to the posterior pole, where they seem to be intimately associated with the superficial nerve fibers. They are most numerous superotemporally and inferotemporally along major retinal vessels, but are sparsest in the nasal quadrants (Fig. 8.6). They are absent in the central macular region.
3.

They rarely anastomose with each other in their superficial location.
4.