The pioneer worker in the study of the ophthalmic artery, particularly its branches and their variations, was Meyer [1] (in 1887); his observations on 20 cases were accepted more or less as classical, and most accounts of the ophthalmic artery in the textbooks have been essentially based on his study of those 20 specimens, ever since. Apart from occasional reports of various abnormalities, there was no systematic study of the ophthalmic artery until my systematic anatomical studies in human beings [2–4]. I investigated its origin (in 170 specimens [2]), intracranial and intracanalicular course (in 106 specimens [2]), intraorbital course (in 61 specimens [3]), and its branches (in 59 specimens with satisfactory filling of all branches [4]). My studies revealed several discrepancies in Meyer’s [1] description, particularly about the branches, presumably because of his small number of specimens. A Medline search reveals that no further detailed, systematic anatomical study on a large number of specimens has followed mine, so that the following description is essentially based on my findings, with the addition of some later information. 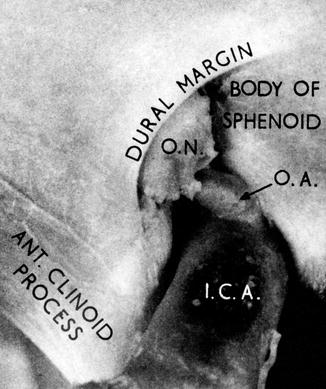 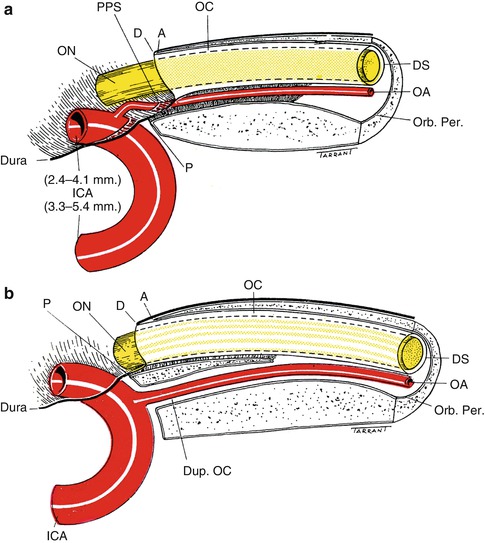 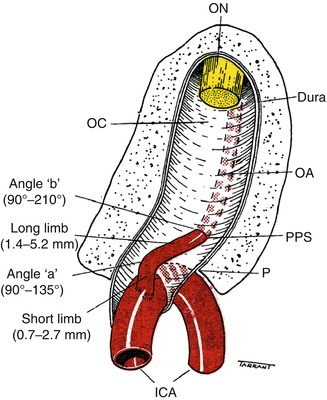 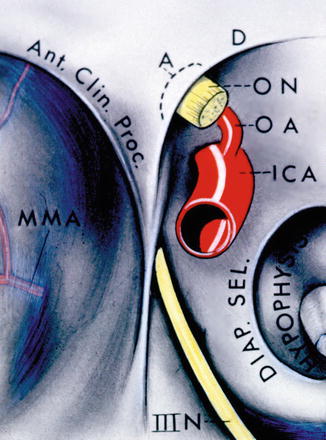 Caliber of the Ophthalmic Artery

Abnormal Origins of the Ophthalmic Artery 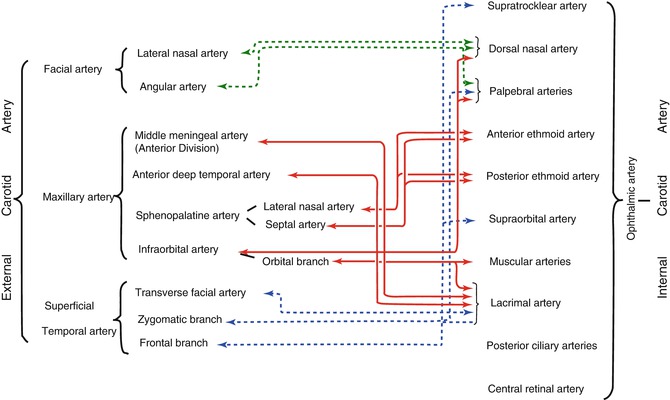 From the Middle Meningeal Artery

From the Intracavernous Part of the Internal Carotid Artery

From the Middle Cerebral Artery

This rare occurrence has been reported when the ipsilateral internal carotid artery is missing [47, 49]. In the case cited by Lowrey [49], the right internal carotid was absent, but the left vertebral artery was larger and so also was the right terminal division of the basilar which supplied the middle cerebral artery in addition to the usual distribution.

From the Anterior Cerebral Artery

From the Basilar Artery

This was reported on angiography in one case [98].

From the Posterior Communicating Artery

From the Facial Artery

From the Infraorbital Artery

There is an anastomosis between the orbital branches of the infraorbital branch of the maxillary artery, passing through the inferior orbital fissure or infraorbital groove, and various branches of the ophthalmic artery, particularly the muscular branches, but no instance of the ophthalmic artery arising from the infraorbital artery can be found in the literature. Winslow [100], however, in 1776 wrote as follows: “The same external carotid, by means of the branch called internal maxillary artery, sends into the orbit through the fissure orbitalis inferior or the sphenomaxillaris, a notable branch, which is distributed in the periorbit, the muscles of the eyeball, in the proper retractor of the upper eyelid, in the fat, in the lacrimal gland, in the conjunctival membranes of the eyeball and the eyelids, in the caruncle, etc. It communicates with the internal carotid.” Haller [84] commented on this as follows: “Surely the utterances of Winslow, who had written rather too loosely, that the artery from the spheno-maxillaris, which to us is infra-orbital, is sent to the muscles, and ball of the eye have been misleading to clinical men.” There is no other mention of the ophthalmic artery arising as a branch of the infraorbital artery. Meyer [1] suggested that Winslow probably based his description on one exceptional case. No such mode of origin was seen in my series, though the anastomosis was very frequently present.

From the Anterior Deep Temporal Artery

The anastomosis between the ophthalmic artery and the anterior deep temporal artery through small canals in the zygomatic bone is not usually well developed, and no example is known of the ophthalmic artery arising from this source, although there are a few references in the literature to an abnormal origin of the lacrimal artery from the anterior deep temporal artery [87, 89]. No such case was seen in my series.

This is described in detail elsewhere [2, 3]. The entire course of the ophthalmic artery can be divided into three parts: (a) intracranial [2], (b) intracanalicular [2], and (c) intraorbital [3].

This section extends from the point of origin to the opening of the optic canal. In my study, it was investigated in 56 specimens. During this part, the ophthalmic artery is intimately related to the proximal part of the internal carotid artery (Fig. 1.1), to which it frequently adheres for some distance [2]. In seven specimens, the intracranial section was absent; in three of these cases, the ophthalmic artery was extradural, and it had no chance of entering the subdural space (Figs. 1.3b and 1.6). The length of the intracranial section was very variable. The subdural part of the ophthalmic artery is always attached to the under surface of the optic nerve by a loose meshwork of vascular connective tissue. In my study, in about 85 % of the specimens, the whole of the intracranial course lay in the subdural space, in about 10 % partly in the subdural space and partly within the substance of the dural sheath, and in 5 % it was extradural (Figs. 1.3b and 1.6). The relationship of the site of origin with the inferior surface of the optic nerve was not affected by the distance between the point of origin and the optic canal in my series, but it was observed that, when the site of origin was further from the optic canal, it tended to be located below the medial side, and vice versa. The initial part of the ophthalmic artery (which may be entirely or partly intracranial) follows a characteristic course, which I divided into 4 parts – from the origin onward, these are the short limb, angle “a,” long limb, and angle “b” (Fig. 1.4). Those are discussed at length elsewhere [2]. The origin the initial parts of the ophthalmic artery, or both, may be closely related to the sphenoid bone (Figs. 1.1, 1.2, and 1.5). Therefore, the likelihood of involvement of the ophthalmic artery and optic nerve in sphenoidal sinus disease must be kept in mind.

This section lies in the optic canal, usually inferolateral to the optic nerve (Figs. 1.2b, c, 1.4, 1.6b, and 1.10). In the region of the optic canal, the two layers of the dura mater are fused, but they split up in the cranial cavity to form the cavernous sinus, while in the orbit the inner layer forms the dural sheath of the optic nerve, and the outer layer forms the orbital periosteum. In the cranial cavity, the ophthalmic artery mostly lies in the subdural space, but in the orbit it lies always between the two layers. In the optic canal, the ophthalmic artery usually lies partly in the subdural space (0.3–4.8 mm) and partly within the substance of the dural sheath (Figs. 1.2b, c and 1.4), less often entirely within the dural sheath with no subdural course (Fig. 1.6).

A diagrammatic representation of the origin, course, and branches of the ophthalmic artery (Reproduced from Hayreh SS [100a]). Ant. Sup. Hyp. Art. anterior superior hypophyseal artery, CAR central artery of the retina, Col.Br. collateral branch, CZ circle of Zinn and Haller, ICA internal carotid artery, LPCA lateral posterior ciliary artery, LPS muscular artery to the levator palpebrae, LR muscular artery to the lateral rectus, Med. Mus. medial muscular artery, MPCA medial posterior ciliary artery, OA ophthalmic artery, Rec.Br.CZ recurrent branches of the circle of Zinn and Haller
Haller [84] quoted Cassebohm [101] as having described a special bony canal separate from the optic canal through which the ophthalmic artery might pass. A similar special canal was also described by Dubrueil [63]. Meyer [1] saw no such canal in his series, but Le Double [102] found twelve cases reported in the literature which occurred singly and bilaterally and in either sex. White [103] saw three such cases and found the artery more commonly grooving the posterior part of the floor of the canal. According to Whitnall [14] and Wolff [37], this is a very rare anomaly, and Whitnall [37] called it a “double optic foramen.” In eight specimens in my series, the ophthalmic artery arose extradurally, and in three of them (two in one subject) it traveled from the cranial cavity to the orbit in a special canal separated by a bony lamina from the optic canal (Fig. 1.3b). This special canal was lined by dura; it was thought to have been formed by ossification of the fibrous tissue between the ophthalmic artery and the optic nerve [1, 14, 37]. The ophthalmic artery, instead of passing through the optic canal or this separate canal, may also pass through the superior orbital fissure [1, 14, 37]. This was seen in one of my specimens, where it lay in the most medial part of the superior orbital fissure medial to the oculomotor nerve and then lay against the inferolateral aspect of the nerve and thereafter ran the usual intraorbital course.
When the artery arises in the subdural space, it always pierces the dural sheath of the optic nerve on its inferior aspect (Figs. 1.2 and 1.4). This penetration, as seen in 50 specimens with subdural origin in my study, occurred in the optic canal in 68 %, under the cranial opening of the optic canal in 20 %, and intracranially in 12 %. This site of penetration was under the lateral aspect of the nerve in 72 % and under the center in 28 %. Haller [84] once saw the ophthalmic artery passing over the optic nerve in this part of its course, but this was not seen in my series; nor was it reported by anyone else.
The ophthalmic artery runs within the substance of the dural sheath until it emerges at the apex of the orbit, where it usually lies at the inferolateral aspect of the optic nerve. During its course in the dural sheath, the artery is separated from the surrounding dura by areolar tissue (Figs. 1.2c and 1.6b), except where it proximally pierces the dural sheath (Fig. 1.2b, c). It can be very easily separated from the sheath and picked up from its bed. In my series, the walls of the ophthalmic artery were seen to be very thin during its course within the substance of the dural sheath. It was, in fact, so thin and transparent that the lumen of the artery was usually seen through it, and it was easily torn on handling.
In the optic canal, the optic nerve is attached to the surrounding dura by fibrous bands (Fig. 1.11); through these bands run the fine branches from this part of the ophthalmic artery. In the event of fracture of the canal, if these fibrous bands are torn, the vessels they contain are also torn, resulting in optic nerve ischemic damage. 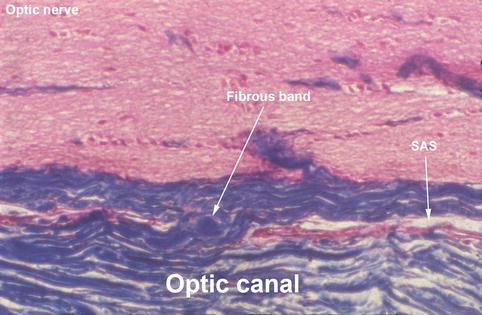