The management of orbital disease in children

Chapter 22 The management of orbital disease in children

Orbital abnormalities in childhood may be congenital or acquired. Congenital abnormalities related to a developmental problem can be confined to the orbit or be part of a more widespread craniofacial malformation. For instance, proptosis may be related to a shallow or small orbit, or the relationship between the orbits may be disturbed: in hypertelorism the orbits are widely separated; in hypotelorism, they are set close together. An orbital wall defect may allow prolapse of intracranial tissue with pulsating exophthalmos or enophthalmos. The orbits develop throughout childhood and congenital absence of the globe, enucleation, or radiotherapy results in failure of normal orbital growth.

Children with acquired orbital disorders most commonly present with signs and symptoms of a mass leading to proptosis or non-axial displacement, soft tissue signs, and/or a palpable orbital mass. Other presentations include reduced vision, restriction of ocular movements, pain and inflammation. Occasionally, a child may present with enophthalmos following orbital trauma.

The relative frequency of the conditions causing proptosis in childhood varies considerably 1–8 depending, in part, on the source of the material. Series from eye hospitals3 are different from those from neurosurgical2 or pediatric units.6 Geographic factors vary: the major causes of proptosis in African children4 are different from those seen in Europe and North America. Series that rely solely on tissues specimens1,5,7,8 reflect the incidence of lesions that are excised surgically and exclude the many conditions that can be diagnosed and treated without biopsy or surgery, such as infantile periocular hemangioma, or those in which biopsy may be more conveniently obtained at another site of involvement, such as neuroblastoma or histiocytosis. In that sense, they are not helpful in formulating the differential diagnosis of an individual child with proptosis.

Within the childhood years, defined here as ages up to and including 16 years, important trends in the incidence of the causative disorders at different times of life can help the diagnostic process.

We have reviewed the clinical data of 326 children seen by the orbital service in Vancouver, Canada since 1976 (Table 22.1). This period includes the introduction of the computed tomography (CT) scan, a watershed in the non-invasive investigation of orbital disease. Neoplasia and structural abnormalities (including cysts) account for the great majority of children presenting with orbital disease (Fig. 22.1). This is quite different from adults, in which over 60% of presentations are due to inflammatory causes: structural abnormalities account for less than 15% of cases. However, the distribution of orbital disease in children aged over 11 years is similar to the adult pattern (Fig. 22.2). 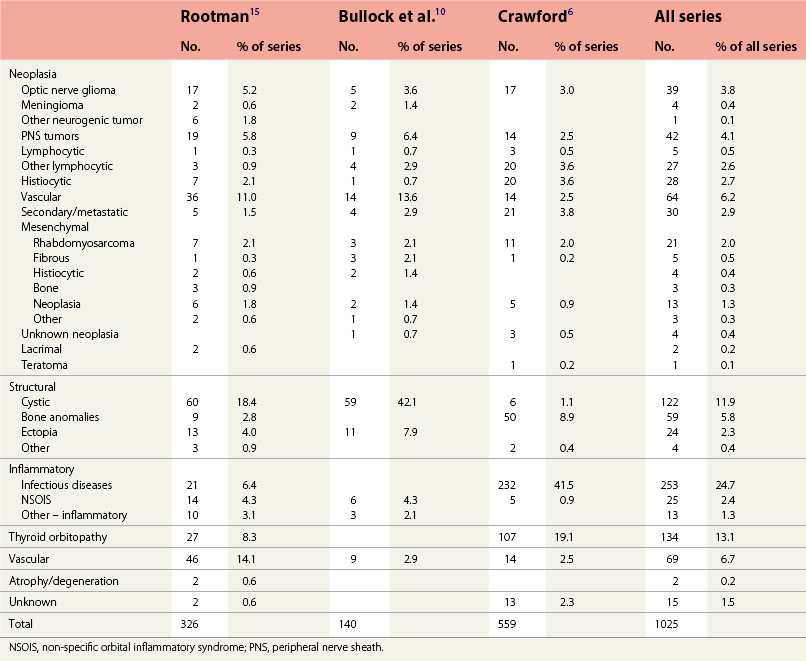 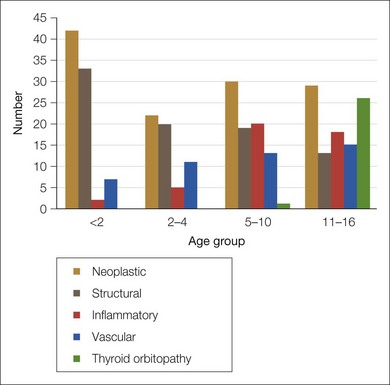 Fig. 22.1 Distribution of orbital disease by age group in patients less than 17 years of age. 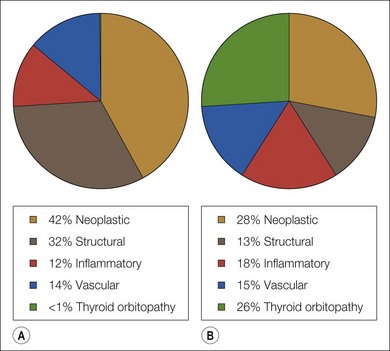 Fortunately, only a small proportion of the neoplasia can be considered malignant, which concurs with published series.6,7,9 Under 2 years of age, the major causes of proptosis are infantile hemangiomas and venous lymphatic malformations (lymphangioma), inclusion and dermoid cysts, and other structural abnormalities. Figure 22.3, which shows the distribution of the major diagnostic groups by age at presentation, indicates that while some lesions are distributed evenly throughout childhood (venous lymphatic malformation, varices, and arteriovenous malformations), others tend to occur within a specific age range. Seven patients with rhabdomyosarcoma were seen, whose ages ranged from 2 to 11 years. The seven patients with Langerhans cell histiocytosis ranged in age from 3 to 9 years. Infantile hemangioma was overwhelmingly more common in early infancy. Inflammatory conditions were increasingly frequent after the age of 5 years, especially orbital cellulitis, non-specific orbital inflammatory syndromes (6 years and over), and thyroid orbitopathy (11 years and over). It is noteworthy that there were two cases of lacrimal gland carcinoma and four of Wegener’s granulomatosis in this series, a reminder that, although rare, these potentially lethal conditions do occur in children. 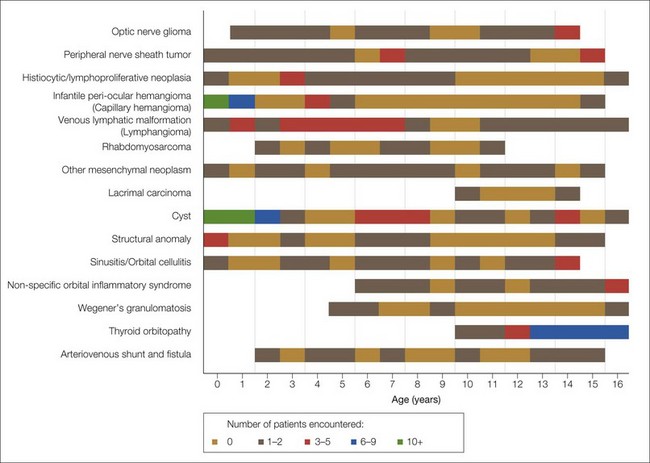 When assessing a child with orbital disease, a history, examination, and differential diagnosis in the context of the child’s age are essential before investigations can be planned.

The age of onset, laterality (unilateral or bilateral), and the tempo of onset are important clues to the diagnosis. The duration may be difficult to determine accurately and a review of old photographs may be helpful, but proptosis alone is frequently not obvious on photos.

Bilateral proptosis in early infancy is often due to orbital shallowing in craniofacial malformations. This can occasionally be unilateral, as in plagiocephaly. Usually, however, unilateral proptosis is due to the globe being displaced forward by a mass within the orbit.

Some masses such as optic nerve glioma or dermoid cyst grow slowly. Rapidly increasing proptosis suggests a metastatic deposit or rapidly growing tumor such as rhabdomyosarcoma. Rapid tumor growth may be associated with necrosis and hemorrhage resulting in periorbital ecchymosis. The presence of bilateral ecchymosis is suggestive of metastatic neuroblastoma.

A catastrophic onset (within hours) implies a bleed within an (often unsuspected) pre-existing lesion such as a venous lymphatic malformation (lymphangioma). Occasionally, the onset of orbital cellulitis may be very sudden. It is usually accompanied by pain, local inflammation, and limitation of ocular motility in a child who is generally ill and febrile. The presence of clinically detectable orbital and periorbital inflammatory symptoms and signs in childhood is overwhelmingly associated with infection or non-specific orbital inflammatory disease. Although inflammation is part of the classical description of rhabdomyosarcoma, it is not typical and was absent in all six patients in our series, all of whom did have rapid onset.

Most round-cell tumors in childhood, including rhabdomyosarcoma, granulocytic sarcoma (chloroma) and Ewing’s sarcoma, present as a mass developing over weeks in a subacute manner. Neuroblastoma can present with onset of proptosis over days.

Tags: Pediatric Ophthalmology and Strabismus
Jun 4, 2016 | Posted by admin in OPHTHALMOLOGY | Comments Off on The management of orbital disease in children
Premium Wordpress Themes by UFO Themes
WordPress theme by UFO themes