Safe and effective surgery for chronic ear disease demands an understanding of temporal bone anatomy and its relevance to function and pathophysiology. Whereas knowledge of surgical anatomy informs the technical processes needed to navigate middle ear and mastoid structures without additional morbidity, an understanding of the mechanisms of chronic otitis media (COM) should guide decisions that reduce recrudescent disease.

Ventilation of the middle ear and mastoid air cells supports the transduction of sound to the cochlea. Whereas the Eustachian tube serves as the primary conduit of airflow into and out of this closed system of air spaces, continuity from one chamber to the other is required to preserve a healthy and functional ear. Acute otitis media usually follows the interruption of middle ear ventilation at the level of the Eustachian tube and consists of a metabolic cascade in the lining of the middle ear and other spaces within the temporal bone that leaves it susceptible to bacterial invasion and empyema. This series of acute and reversible events is comparable with post-obstructive changes in a lung segment after aspiration of a foreign body, for example.

Chronic hypoventilation of the middle ear and mastoid, however, can lead to COM characterized by persistent mucosal changes that support bacterial colonization and recurrent superinfection. Akin to the consequences of chronic obstructive lung disease, such as bronchitis, COM can be associated with an overproduction of secretions and the generation of purulent discharge. Degradation of the ossicular chain, particularly the long process of the incus, and the tympanic membrane (TM) occur during acute exacerbations of COM. A single nutrient vessel of the long process of the incus is susceptible to thrombosis and bone necrosis in the setting of otitis media.1,​2 When persistent hypoventilation occurs at the level of the Eustachian tube, changes in the mesotympanic area may include retraction of the pars tensa with effusion, TM perforation with mucosal hypertrophy, and polypoid changes of the middle ear with otorrhea. Similar mucosal changes occurring in the attic, antrum, and other temporal bone air cells result from hypoventilation in these areas but are not as readily appreciated on physical examination.

These hidden changes can occur even in the setting of normal Eustachian tube function if ventilation pathways between the mesotympanum and remaining air-filled spaces throughout the temporal bone are narrowed or obstructed. Restricted airflow through the attic to the antrum may, for example, result from space restrictions imposed by contracted bony walls of the attic and aditus ad antrum or by a relatively large incus body and malleus head. Restricted ventilation through the attic is more likely, however, the result of soft tissue stenosis imposed by inflammatory effects on the system of ligaments and mucosal folds associated with the ossicular chain. Whether congenitally narrowed or restricted by inflammatory changes and scarring following recurrent infections, obstruction of airflow in the attic region produces chronic mucosal changes in the mastoid. The resulting negative pressure in the attic region creates favorable conditions for attic retraction of the TM and migration of keratinized epithelium, leading to cholesteatoma formation. In addition to eliminating cholesteatoma and its health risks, the goal of otologic surgery should be to establish a healthy well-ventilated ear.

As the epicenter of chronic ear disease, the attic and the antrum are the primary targets of surgical intervention (▶ Fig. 7.1). From the beginning of the mastoidectomy procedure, the goal of establishing a well-ventilated ear should at all times be guided by landmarks and surgical principles that preserve the cortical lining of the middle fossa and, depending on the approach, the external auditory canal (EAC).3 Starting with the soft tissue dissection, the cortical surface of the mastoid process should be exposed as far anteriorly as the root of zygoma, thereby giving access to the region immediately superior to the bony EAC, deep to which the attic will be found. Review of coronal computed tomography (CT) scans through this area will provide information about the space available between the middle fossa and EAC cortex to access the attic. If too narrow, limited access through the mastoid can still be accomplished. Appropriate placement of the anterior-posterior periosteal incision adjacent and tangential with the EAC, followed by the elevation and retraction of the temporalis muscle, provides access to important cortical landmarks needed to perform a safe mastoidectomy. 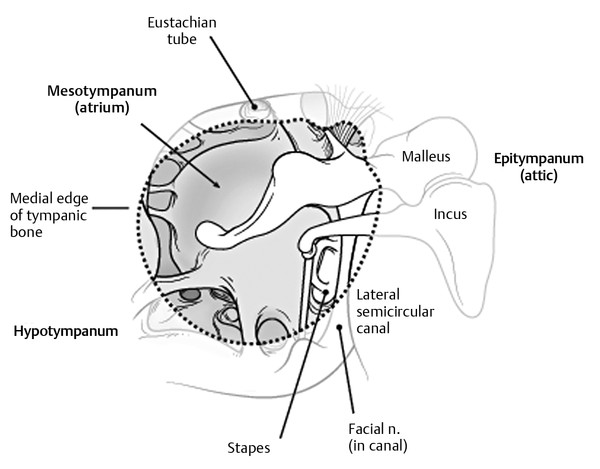 Fig. 7.1 The aperture normally occupied by the tympanic membrane encompasses the mesotympanum. The epitympanum is the superior space occupied by the head of malleus and body of the incus, and which communicates posteriorly with the mastoid antrum.

Following placement of a superior-inferior incision and elevation of the mastoid periosteum to the bony EAC, landmarks for the underlying mastoid antrum become visible. The spine of Henle is a cortical extension of the bony EAC that presents as a ridge at the superior posterior edge of the canal rim (▶ Fig. 7.2a).3,​4,​5,​6 Posterior to the spine of Henle is a depression in the cortical bone known as Macewen’s triangle, also known as the cribrose area for the multiple bony perforations that accommodate small emissary veins from the antral mucosa found deep to this area. The linear ridge oriented in an anterior to posterior direction superior to the EAC is known as the temporal line and serves as an estimate for the lowest level at which the middle fossa floor can be found within the mastoid. The so-called mastoid tegmen corresponds to the cortical lining of the middle fossa and starts laterally above the temporal line before it curves inferiorly to form the roof of the mastoid and attic spaces. With this in mind, the tegmen should first be identified superficially above the temporal line and followed inferiorly and medially into the mastoid cavity, where it often bows before ascending to take a more superior position within the antrum (▶ Fig. 7.2b).3 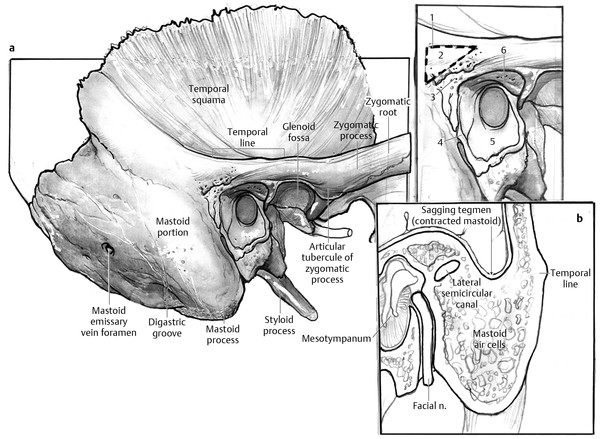 Fig. 7.2 (a) Lateral view of the temporal bone showing relevant bony landmarks of the mastoid operation and suture lines within the bony external auditory canal (inset; 1, Macewen’s triangle; 2, cribriform area; 3, spine of Henle; 4, tympano-mastoid suture line; 5, external auditory canal; 6, tympano-squamous suture line). (b) Coronal section through mastoid showing low hanging tegmen in contracted mastoid and the increased vulnerabilty of the labyrinth and facial nerve if not carefully sculpted as the antrum is opened. Laterally, the tegmen is best found superior to the temporal line where it is most superficial.

The temporal bone has a pyramidal shape with the squamous, mastoid, and tympanic portions forming the base and the petrous bone forming the apex medially (▶ Fig. 7.3a). Medial to the labyrinth, the petrous apex is marrow-filled in children and becomes ventilated to varying degrees with maturation (▶ Fig. 7.3b).5 Meckel’s cave is located within a depression on the superior (middle fossa) surface of the petrous apex. The internal auditory canal (IAC) traverses the petrous apex from the opening of the porus acousticus in the posterior fossa. The abducens nerve is located within the bony Dorello’s canal at the petrous apex.7 Extension of COM to the petrous apex can produce inflammation of adjacent structures, causing the symptom triad of abducens palsy, retro-orbital pain, and otorrhea, known as Gradenigo’s syndrome. The lateral sinus becomes the sigmoid sinus within the bony sulcus on the medial posterior surface of the temporal bone and exits the cranium through the jugular foramen located at the junction of the petrous and occipital bones.3,​4,​6 Lateral to this foramen, the dome of the jugular fossa forms the floor of the hypotympanum.

7.3 The Tympanic Membrane and Middle Ear

The TM is a translucent window to the mesotympanum of the middle ear and the input for sound conduction to the middle ear transduction mechanism. Whereas the diminutive pars flaccida occupies the notch of Rivinus superior to the lateral process of the malleus, the pars tensa makes up the remainder of the TM (▶ Fig. 7.4). Both parts of the TM are lined by cuboidal middle ear epithelium medially and keratinized epithelium laterally.2,​8,​9 The pars tensa, however, has an intervening fibrous layer that attaches the TM onto the manubrium of the malleus centrally and the tympanic ring peripherally. The annular ligament is continuous with the fibrous layer, which consists of radial and circumferential fibers, and occupies a groove within the tympanic bone from the anterior to posterior spines. 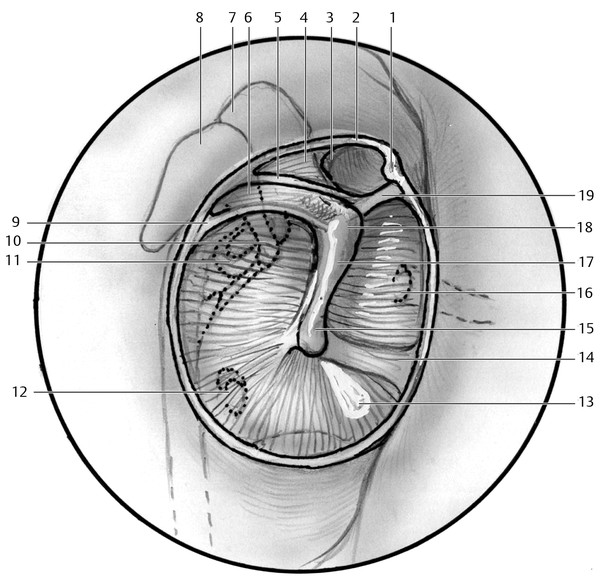 The middle ear contains the ossicular chain, its ligamentous attachments, and the tendons of the tensor tympani and stapedius muscles and is traversed by the chorda tympani.8,​10 The bony confines of the middle ear consist of the tympanic ring circumferentially and the labyrinth and facial nerve medially. Other fixed anatomic landmarks of the tympanic cavity include the cog, the cochleariform process, and the pyramidal process as well as intervening recesses, all of which have surgical relevance. Connected to the ossicular chain, mucosal folds arise, creating different middle ear compartments that shape the mucosal physiology and ventilation pathways of the middle ear.8,​10 The advent of middle ear endoscopy and its increasing use as a surgical tool in cholesteatoma surgery has led to a greater awareness of the intricacies of bony and membranous anatomy of the middle ear and its importance in the pathogenesis and treatment of cholesteatoma.

The retrotympanum is an important middle ear location that encompasses different ridges and spaces lying in the posterior aspect of the tympanic cavity. The anterior limits of the retrotympanum include the tympanic segment of the facial nerve and the stapes posterior crura superiorly and the promontory inferiorly. Several authors have studied this region and have proposed different anatomic names over the years.8,​10,​11 An understanding of the retrotympanic anatomy is crucial for the effective use of middle ear endoscopy given that this is the most frequent location for recurrence of cholesteatoma. 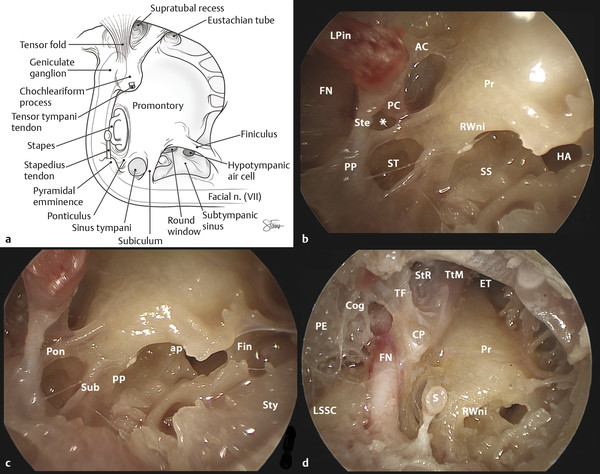