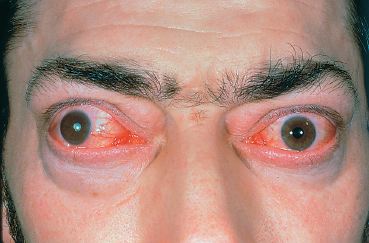 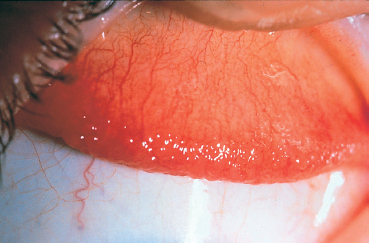 Fig. B Papillary hyperplasia of the superior palpebral conjunctiva 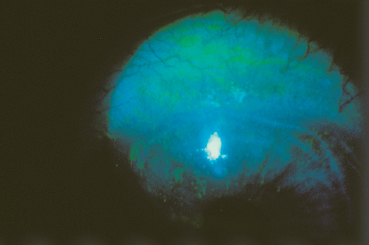 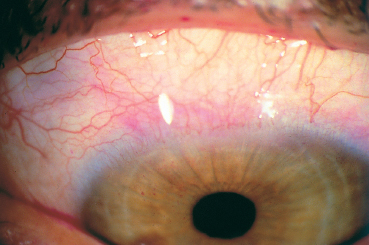 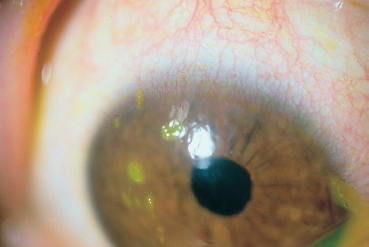 Superior limbic keratoconjunctivitis (SLK) is a cause of chronic conjunctival inflammation that is too often overlooked, yet its diagnosis is relatively simple, based on the topographical pattern of corneoconjunctival dye staining, which is highly characteristic and specific. The diagnosis of SLK must be evoked in patients with filamentary keratitis. Its pathogenesis is unclear and is the subject of many discussions. The fact that SLK often goes misdiagnosed or undiagnosed is particularly regrettable, as it can be highly incapacitating and effective treatments are available.

Superior limbic keratoconjunctivitis was first recognized as a separate entity by a New York ophthalmologist named Theodore, who gave his name to a form of keratoconjunctivitis associated with filaments, of which he observed several cases in 1961.1,2 A similar form of keratitis had in fact been described 8 years previously by Braley and Alexander.3 A certain confusion has since existed between Theodore’s keratoconjunctivitis and Thygeson’s keratitis, which were considered as particular forms of a single entity.4,5 Theodore’s SLK is now clearly defined. It is a chronic recurrent disease affecting the superior bulbar and pal-pebral conjunctiva and the adjacent cornea, in the form of epithelial punctate keratitis that can be filamentary.6–9

Superior limbic keratoconjunctivitis affects all age groups, but has a higher prevalence in middle-aged adults and females ).10 A case of affected twins has been reported.11 Usually bilateral (70%), it can also be asymmetric. It is associated with hyperthyroidism (Fig. A) in 20-50% of patients.2.10.12

Ocular symptoms are poorly specific, generally consisting of discomfort, a foreign-body or burning sensation, and photophobia. The eye is red and there is mucus discharge. The intensity of symptoms is highly variable. Patients with severe forms can have blepharospasm and pseudoptosis.

Importantly, the lesions only affect the upper part of the eyeball. They classically consist of papillary hyperplasia of the superior tarsal conjunctiva (Fig. B), hyperemia of the superior bulbar conjunctiva that appears edematous and poorly adherent to the underlying sclera, and epithelial punctate keratitis of the upper third of the cornea. If fluorescein, rose bengal, or lis-samine green stainings are not used, the diagnosis of SLK can easily be missed, because the eye otherwise appears strictly normal in most cases. A punctate pattern of dye uptake by the superior limbal conjunctiva and the upper part of the cornea is highly characteristic of the disease (Figs. C and D). The presence of corneal filaments (found in 33-50% of cases) reinforces the diagnosis (Fig. E).6,9,10 A quarter of patients have deficient tear secretion, as shown by Schirmer test.10

The disease course is chronic, with exacerbations and quiescent periods for 1 -10 years. The length of remissions gradually increases and the disease generally subsides spontaneously.

When filamentary keratitis is present, one possible differential diagnosis is keratoconjunctivitis sicca, although the filaments predominate on the inferior cornea.

The histological and ultrastructural characteristics of SLK are well known, because the conjunctiva is easily accessible to sampling (scrapings, biopsy, and impression cytology).8,10,19,23 All these examinations show squamous metaplasia of the superior bulbar conjunctival epithelium with a loss of goblet cells and acanthotic degeneration of epithelial cells. The latter have a condensed nuclear chromatin whose appearance on conjunctival impression cytology is highly characteristic (“snake-like” chromatin)24 and they are glycogen-rich.23 The conjunctival stroma, which is edematous and rich in dilated lymphatics, is only weakly infiltrated by inflammatory cells.25 Ultrastruc-turally, epithelial cells from the bulbar conjunctiva contain secondary intracytoplasmic lysosomes, together with kerato-hyalin granules and increased numbers of microfilaments that are condensed and strangle the nucleus, giving it a polylobular or polynuclear appearance.25 In contrast, the palpebral conjunctiva is rich in goblet cells; its epithelium is normal and its chorion is infiltrated by inflammatory cells (polymorphonu-clear neutrophils, lymphocytes, and plasma cells).17

The pathogenesis of SLK is unknown, but evidence supporting a viral cause was sufficiently convincing for Smolin and Thoft to classify this disease in the section of their book, The Cornea, devoted to presumed infectious diseases.26 However, no infectious agent has been found, either by culture or by histological and ultrastructural examination.4,8,13,25,27 Other authors have raised an immunological mechanism,15 but the rare inflammatory components in conjunctival biopsy specimens, the absence of immunological markers, and the poor therapeutic response to corticosteroid eyedrops argue against this hypothesis.17,28 Another cause could be a dye eye syndrome, but only 25% of patients appear to be affected.17 According to Wright, chronic inflammation of the superior palpebral conjunctiva would lead to defective maturation of its bulbar counterpart, in turn generating keratoconjunctivitis.17 Many specialists favor a mechanical cause.26 The current theory is that an allergic29 or mechanical stimulus (e.g., hyperthyroid exophthalmia) leads to inflammatory edema of the superior conjunctiva with secondary laxity of the bulbar conjunctiva. A vicious circle would then occur, mutually irritative friction of the superior bulbar and palpebral conjunctival surfaces maintaining the symptoms. The frequency of the association between SLK and hyperthyroidism (20-50% of cases),2,12–17 the disappearance of ocular symptoms during treatment of the endocrinopathy,10,26 and the efficacy of treatments promoting adherence of the superior bulbar conjunctiva all argue in favor of this mechanical theory.

Several topical treatments have been tried, with very inconsistent results; they include antivirals, antibiotics, corti-costeroids,9 methylcellulose, acetylcysteine,17 vitamin A,14 sodium cromoglycate,30 and pressure patching.31 Wide soft hydrophilic therapeutic contact lenses can relieve the symptoms,31 but necessitate special monitoring and can themselves induce conjunctival toxicity with a clinical aspect similar to that of SLK.18–22

Treatment of thyroid dysfunction, and orbital decompression in severe forms, can by themselves cure the keratocon-junctivitis.10,12,26

Silver nitrate solution at a concentration of 0.5 %, first recommended more than 30 years ago by Theodore, is still one of the most effective treatments. It must be freshly prepared and used immediately. It acts by retracting the conjunctiva and consolidating its adhesion to the underlying tissue. It must be applied to the superior bulbar and palpebral conjunctiva with a cotton tip, taking care not to touch the cornea (risk of tattooing with silver deposits). The ocular surface must be rinsed 2 minutes later.2 Silver nitrate therapy can be repeated every week according to symptoms.

Surgery is an option when silver nitrate therapy is ineffective or unavailable. Some measures generally have only transient efficacy, such as thermal cautery of the superior bulbar conjunctiva32 or recession of the involved bulbar conjunctiva. The method that gives the best long-term results is resection of the superior limbic conjunctiva (peritomy from the 10 o’clock and 2 o’clock position, and resection of an arcuate segment of conjunctiva and Tenon capsule measuring 5 mm in the 12 o’clock meridian). Anchoring the conjunctiva to the sclera does not seem to be beneficial.13,25,33 Adverse effects are rare or very rare, consisting of pseudoptosis or scleral thinning in patients with a severe dry eye syndrome.34

1. Theodore FH. The Collected Letters of the International Correspondence Society of Ophthalmologists and Otolaryngologists. 1961; 6 : 89