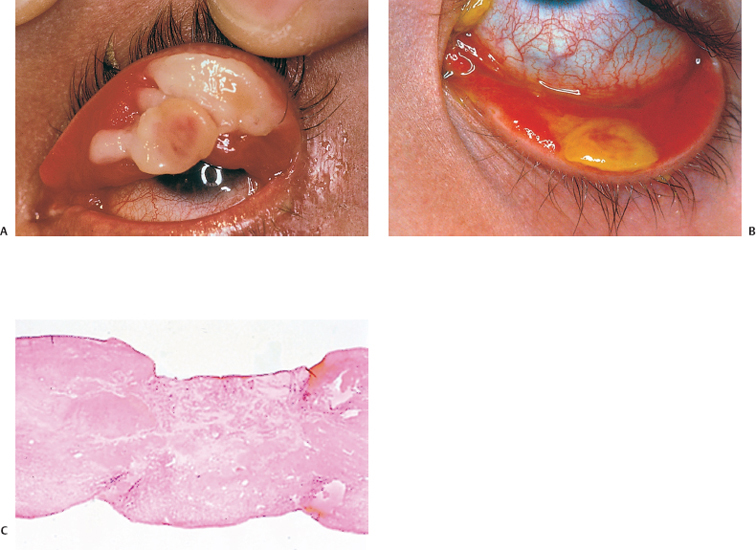 Ligneous conjunctivitis, a chronic inflammatory disease of the conjunctiva, is both mysterious and astonishing in its clinical manifestations. More than half a century after its first description, and despite all the scientific progress made around the turn of the millennium, we know little of its pathogenesis. This accounts for the large number and diversity of treatments attempted empirically and without reproducible success. Ligneous conjunctivitis is particularly worrying when it affects young children, and when the membranes extend to the inter-palpebral fissure, recurring as soon as they are removed, and threatening blindness due to corneal complications.

The term “ligneous conjunctivitis” was first used by Borel,1 who in 1934 described the case of a 3-year-old girl with recurrent bilateral membranous conjunctivitis associated with induration of the eyelids that had a wood-like feel (the Latin lignum means “wood”). The description of this form of conjunctivitis resembles that made by Bouisson,2 who, a century earlier in 1847, had described a case of hyperacute pseudo-membranous conjunctivitis. Since these initial publications, this disease of unknown cause remains just as mysterious, and there is still no consensus on its clinical definition, pathogenesis, or treatment.

Ligneous conjunctivitis is a rare disease that classically affects children, with a higher prevalence in females.3 However, a review of the literature comprising 84 cases underlined that it is not only young girls who are affected.4,5 Indeed, ligneous conjunctivitis has been observed from birth up to the age of 85 years.6–9 Familial cases affecting one1.5–7.10 or even two generations11 have also been described.

Often bilateral, ligneous conjunctivitis is initially characterized by the formation of a false membrane (occasionally a true membrane), which is thick, salient, usually located on the superior tarsal conjunctiva, and recurs almost immediately after its ablation. The false membrane is composed of loose fibrino-cellular tissue that is poorly adherent to the underlying epithelium, from which it is easy to detach. A true membrane cannot be detached without removing the epithelium and leaving the chorion naked and bloody. In the long term, the lid develops an induration with the formation of a lesion that has a granulomatous aspect and is sessile or pedunculated. It can be very large; its flattened shape and smooth surface are due to its permanent friction against the eyeball during blinking (Figs. A, B and Figs. 11.1,11.2). Ligneous conjunctivitis progresses for periods ranging between 4 months and several decades. The discomfort can be minimal, with no visual impairment. A third of patients have spontaneous regression.3,7 Corneal complications such as opacities and even perforation can occur.6,12,13,14 The ocular signs are often preceded by a general febrile syndrome; concomitant involvement of other mucous membranes has been described, such as those of the upper respiratory tract,15,16 middle ear,17 vagina, cervix,18 and even the fallopian tubes.19 Some forms can be life-threatening. 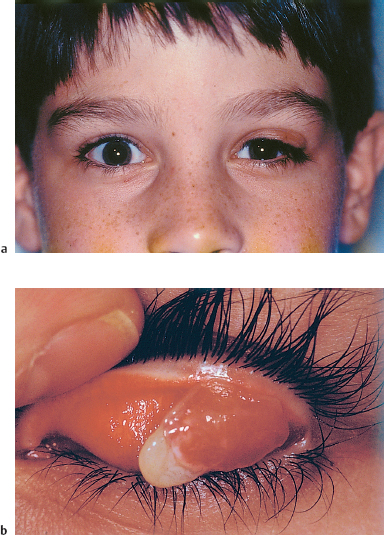 Figs. 11.1 a and b Ligneous conjunctivitis in a 10-year-old child 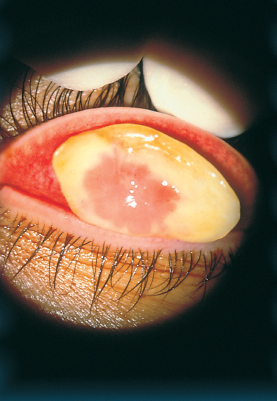 Fig. 11.2 Ligneous conjunctivitis: note the smooth surface of the membrane in contact with the eyeball

The first detailed histological description of ligneous conjunctivitis was made by Lijo Pavia in 1924.21 The epithelium covering the membranes is usually fine and atrophic, but can be hyperplastic in places. The membranous formations have an aspect of acute or chronic fibrinous inflammation, with multiple layers of fibrin containing large numbers of plasma cells, eosinophils, lymphocytes, polymorphonuclear neutrophils, mast cells, and fibroblasts. Some areas are avascular, and are occupied by acidophilic hyalin material which is stained by periodic acid-Schiff (PAS), while others contain highly vascu-larized granulation tissue rich in inflammatory cells, recalling the histological aspect of pyogenic granulomas (Fig. C and Fig. 11.3).7,12,22,23,24 The membranes being rich in acid mucopolysac-charides, some authors have attempted to treat ligneous conjunctivitis with topical hyaluronidase and α-chymotrypsin.6,8 The ultrastructural aspect of the amorphous subepithelial material resembles fibrin3. Immunopathological examination of ligneous conjunctival lesions in two patients showed a predominance of activated T cells and local infiltrates consisting of plasma cells and B lymphocytes that appeared to reflect an excessive immune response. In the same study, direct immuno-fluorescence revealed abundant IgG within the amorphous hyalin material. On the basis of these results, the two patients received topical cyclosporine.25 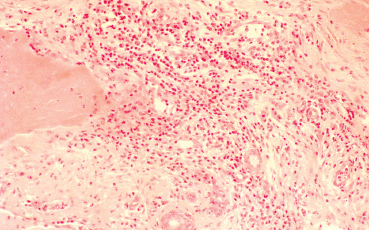 The pathogenesis of ligneous conjunctivitis is unclear. However, there is growing evidence that plasminogen deficiency and hypofibrinolysis play an important role.26,26a-d,27 One hypothesis is that the serofibrinous transsudate from the conjunctival new vessels coagulates, leading to the formation of a granulation tissue rich in hyalin material, which would be responsible for the induration and the formation of more consistent membranes.24 The activated T cells and the marked vascularization point to the inflammatory nature of the disease.25 Conjunctival trauma is sometimes incriminated in this aberrant exudation of fibrin and plasma constituents, following chalazion treatment,28 conjunctival surgery,28,29 pterygoid8 and pinguecula9 excisions, and strabismus surgery.30 The presence of large numbers of polymorphonuclear eosinophils and mast cells could partly explain the vascular hyperpermeability.16 Some authors consider that certain familial cases of ligneous conjunctivitis argue in favor of a certain hereditary determinism.1,5,7,10,11,12 For others, the existence of similar extraocular lesions and the association with diseases such as toxic epidermal necrolysis31 and hydrocephaly point to an underlying systemic disorder. A case of ligneous conjunctivitis with concomitant gingival and peritoneal involvement has also been reported following intake of tranexamic acid, an antifi-brinolytic drug indicated in menorrhagia.33 Finally, although an infectious cause has often been suspected, no firm evidence has been obtained.21

Since its first description, ligneous conjunctivitis has been treated with a plethora of approaches that have produced variable results. The main difficulty in treating this disease is that we know very little about its pathogenesis. Among the ineffective empirical therapies previously attempted are injections of antidiphtheric serum and application of iodized alcohol or silver nitrate. The literature also contains anecdotal therapeutic successes that have never been confirmed. One case of remission from ligneous conjunctivitis associated with laryngeal involvement was attributed to immunosuppressive treatment with azathioprine.34 Surgical excision has sometimes proved effective, when followed by several months of beta irradiation in divided doses,35 cryopexy and fibrinolysin instillation,7,24 cauterization, or conjunctival grafting.36 When analyzing the results of treatment it is important to keep in mind the fact that the disease heals spontaneously in about a third of cases.3,7 Surgical removal of the membrane is usually followed by relapse a few days later, and such relapses occur faster as the number of attempted excisions increases. 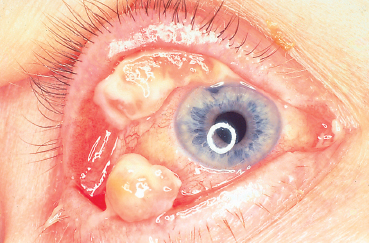 Fig. 11.4a Right unilateral ligneous conjunctivitis in a 68-year-old woman after chalazion surgery 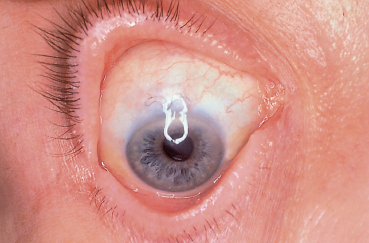 Other authors, among whom Jules François was one of the first, have reported the beneficial action of topical hy-aluronidase and α-chymotrypsin, a treatment approach based on histochemical observations of acid mucopolysaccharides in the ligneous membranes.3,6,8,37 These mucopolysaccharides are not, however, found in all patients, or at least are not always the main component of the lesions.28 This would explain the variable results obtained with this treatment.23 The presence of a marked inflammatory infiltrate within the membranes has led some authors to try (with some degree of success) topical cyclosporine, a drug which acts by selective immunomodulation of T cell activation.25,38–40 However, its efficacy is inconsistent.41 Adjunction of disodium cromoglycate has been proposed when mast cells are abundant.16,42

The treatment recommended by De Cock et al.28—surgical resection of the membranes followed by careful hemostasis, immediate heparin instillation (1000-5000 IU/mL every hour), and topical corticosteroid therapy until reepithelialization— seems very promising and has a certain pathogenic basis. These authors cured 13 out of 17 patients with ligneous conjunctivitis, sometimes after three attempts. They also used topical α-chymotrypsin in 12 patients, but this compound is no longer manufactured. We successfully treated our last three patients using this approach, but without α-chymotrypsin (Fig. 11.4). Fibrin indeed seems to be a good treatment target-perhaps the most logical target—given its abundance in the lesions.9,14,17,22,28. Heparin binding to antithrombin III, a natural anticoagulant, promotes antithrombin III binding to thrombin and prevents fibrinogen transformation into fibrin. It also prevents thrombin formation from prothrombin by inhibiting factor Xa.