The word cholesteatoma is connected to Johannes Mueller, a German pathologist who introduced it in the year 1838 as a term for a “tumeur perleé,” which had previously been described by the French pathologist Jean Cruveilhier in 1829.1 Prior to this, in 1683, the French physician Joseph Guichard du Verney had observed and published a case of cholesteatoma and named it steatome. Also, Craigie in 1828 and Virchow in 1855 had each used the ancient Greek term margaritoma, which means “pearly tumor,” to describe cholesteatoma.2 Today the terms epidermoid cyst or epidermoid3 are also widely used, especially by pathologists, to describe the microscopic findings of this pseudo-neoplasm. The term epidermoid is also commonly used in clinical medicine to describe these lesions when they are encountered outside of the tympanomastoid compartment, such as in the case of an epidermoid of the cerebellopontine angle.

The retraction pocket theory posits that low pressure in the middle ear due to Eustachian tube dysfunction or epitympanic dysventilation leads to a retraction of the tympanic membrane, which eventually evolves into a trapped compartment that is unable to maintain a self-cleansing mechanism. The result is a medially advancing cholesteatoma sac.

With the proliferation theory, inflammation stimulates the basal cells of the stratum corneum of the pars flaccida of the tympanic membrane, resulting in papillary ingrowth into the attic space. Similar to the retraction pocket theory, the mechanism of this theory ends with a disrupted self-cleansing mechanism and medially advancing cholesteatoma sac.

The metaplasia theory proposes that otitis media stimulates the middle ear mucosa into hyperplastic transformation and dedifferentiation that generates squamous epithelium, which starts to cornify and epidermalize. Evidence to support the metaplasia theory is weak.

Additionally, iatrogenic or implantation cholesteatomas are other possible etiologies for acquired cholesteatoma. These are cholesteatomas that develop secondary to displacement of unwanted epithelial tissue into the middle ear space during surgery or trauma. 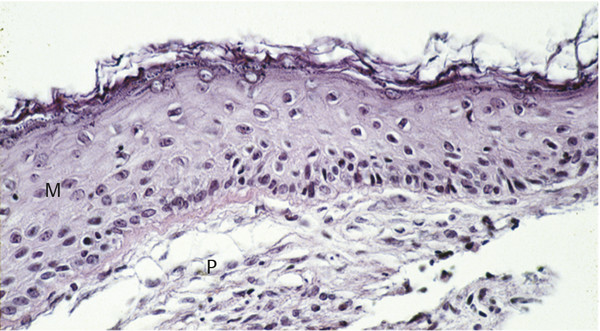 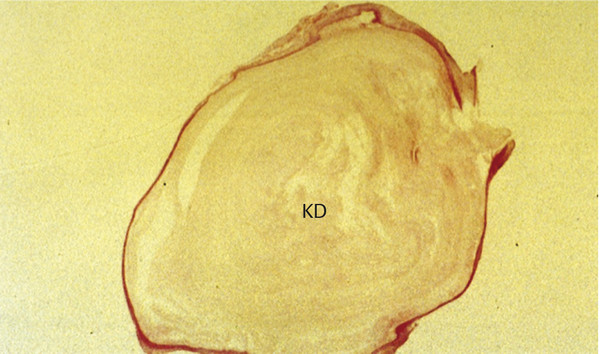 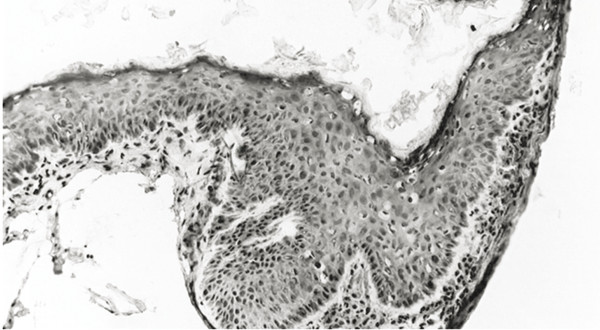 Fig. 4.3 Papillary ingrowth of the epithelium.

In almost all cholesteatoma specimens, a nonhomogeneous staining is observed for Ki67 that depicts areas of high and low proliferative indices in the basal and suprabasal epithelial layer (▶ Fig. 4.4; ▶ Fig. 4.5). In contrast, EGFR staining shows a more homogeneous spread in all areas of the matrix and perimatrix independent of the thickness of the epithelium and degree of papillary ingrowth (▶ Fig. 4.6).8 In addition, staining cholesteatoma for collagen IV and α-laminin, both components of a mature epithelial basal membrane, demonstrates gaps and interruptions of the collagen structure and basal membrane (▶ Fig. 4.7). Such interruptions suggest an immature basal membrane, as would be expected in a hyperproliferative disease state.9 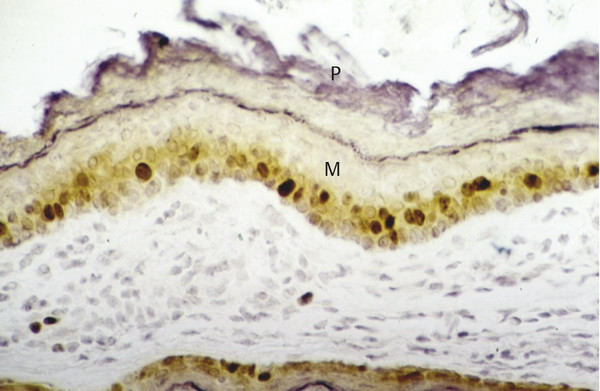 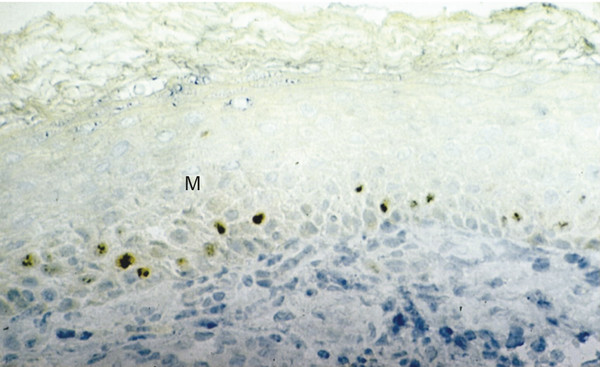 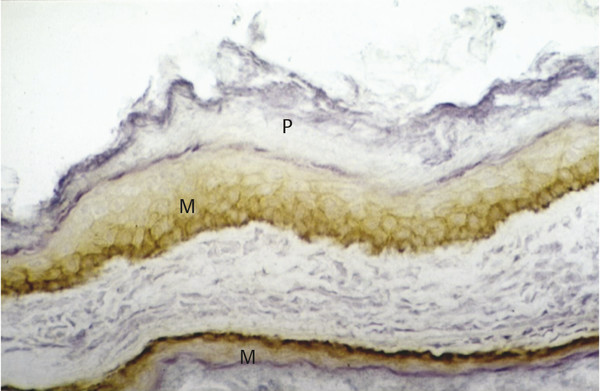 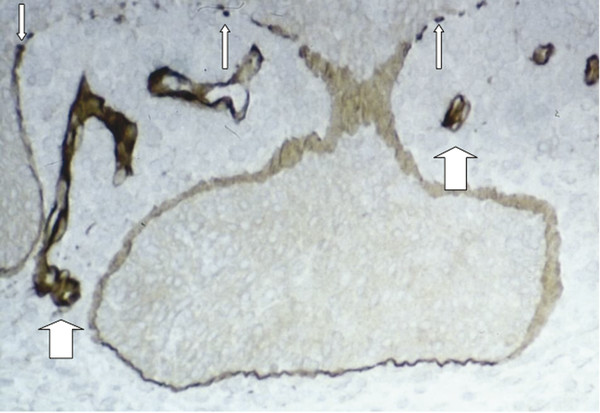 Fig. 4.7 Basal membrane stained with a laminin antibody showing a fragmented membrane (thin arrows) of the epithelial matrix and some vessels (thick arrows) in the perimatrix.

Inflammation in cholesteatoma is characterized by the presence of CD1a-positive Langerhans cells, the most potent antigen-presenting cell in the matrix of cholesteatoma (▶ Fig. 4.8). Also present are a high number of T-helper cells (CD4), with a relatively lesser number of CD8-positive T-suppressor cells. Collectively, these findings compose a picture of an antigen/antibody-mediated host immune response to cholesteatoma. All components of the reaction are present, and cell-cell contacts between Langerhans cells and T-helper cells and between T-helper cells and macrophages in the perimatrix can be observed using double-staining techniques (▶ Fig. 4.9; ▶ Fig. 4.10). Gaps in the basal membrane allow the cellular migration of interdigitating cells as well as of T-cells (▶ Fig. 4.11). 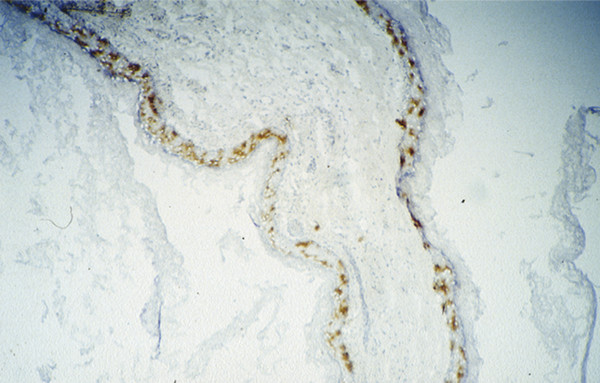 Fig. 4.8 CD1-positive Langerhans cells in the matrix of cholesteatoma. 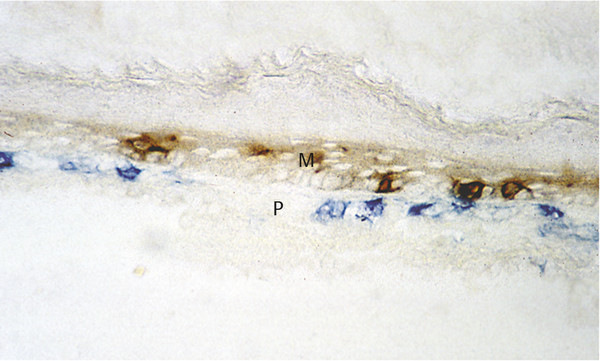 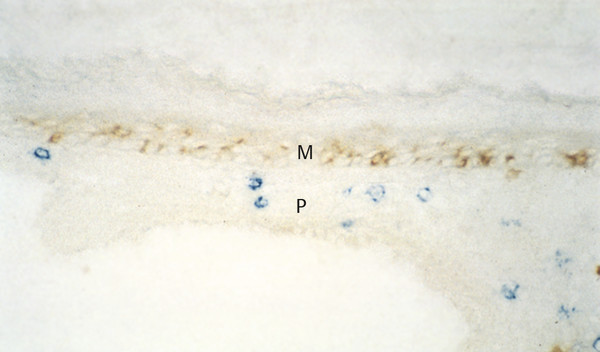 B-cells and MHC class II-positive macrophages in higher numbers complete the findings of the immune response. Possible antigens, such as keratin,10,​11 bacterial antigens, viruses,12,​13,​14 or foreign bodies, have also been considered to potentially play a role in the immune response. Via inflammation, various cytokines and mediators are produced that stimulate osteoclasts to resorb bone and fibroblasts to proliferate. Factors like interleukin (IL)-1, IL-2, IL-6, tumor necrosis factor, matrix metalloproteinase (MMP)-2, MMP-3, and MMP-9 have been detected in cholesteatoma tissues.15,​16,​17,​18,​19,​20,​21,​22 Recently, some publications have underlined the role of the fibroblasts in the perimatrix of cholesteatomas, noting their secretion of keratinocyte growth factor and MMP-2 and MMP-9.23,​24

The higher occurrence of MMP and expression of CD31 as a marker for angiogenesis in children indicate a clear difference in the cholesteatomas of this age group and may explain a higher amount of recurrences and aggressive disease behavior in the younger patient.25 However, the clinical findings of aggressive cholesteatoma do not clearly correlate with the immunohistochemical or molecular biological findings (author Hoppe’s unpublished data).

Cholesteatoma can be observed to generate destruction of bone via a process of absorptive osteitis. Due to the inflammatory reaction spurred by exposure to various antigens, activated macrophages produce cytokines, such as IL-2, IL-6, and TNF-α, which in turn cause the expression of Receptor Activator of NF-κB Ligand (RANKL). This process leads to the activation of osteoclasts and the production of MMP-2, MMP-9, and endopetidases, all of which can degrade the extracellular matrix of bone. These cytokines also interact with hexaminidase, an enyzme that induces the secretion of N-acetyl-d-hexosamine and influences bone resorption directly.26,​27 A stronger expression of MMP in the perimatrix correlates with a higher amount of bone destruction,17,​28 especially in sinus tympani cholesteatomas.

One question for surgeons is the possible use of autologous ossicles in patients undergoing surgery for cholesteatoma. In a group of 80 cases, 76% of specimens demonstrated ossicular bone destruction histologically. This was characterized by bone remodeling and a predominance of osteoclastic destruction. The epithelium never showed direct contact to the bony surface, but, instead, a layer of connective tissue was located between the bone surface and epithelium. Scanning microscope findings illustrate this clearly (▶ Fig. 4.12). Histology demonstrates the subepithelial inflammation typical of cholesteatomas and the osteitis in the haversian canals (▶ Fig. 4.13). In comparison to non-cholesteatomatous chronic otitis media, the findings of ossicular erosion in cholesteatoma are more severe (▶ Table 4.1).29 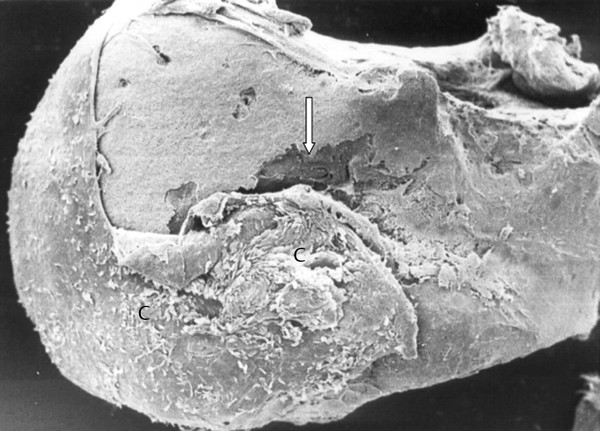