Overview of Relevant Clinical Disorders and Their Relation to Keratoprosthesis

A 30-year-old with bilateral Stevens-Johnson’s syndrome with hand motion vision in both eyes (a) with keratinization of the ocular surface which improved to 20/125 (b). Postoperatively there is mucous underneath the front plate

Improvements in the design of the Boston Kpro have yielded better device retention. Introduction of holes in the back plate allows better permeation of aqueous humor to the corneal endothelium and stroma [7]. Use of broad-spectrum long-term antibiotics and large bandage contact lenses has decreased infection rates and improved surface wetness, resulting in less tissue melt and implant extrusion. Nonetheless, SJS affecting the ocular surface remains difficult to treat. In a study of 16 patients undergoing Kpro surgery for Stevens-Johnson’s syndrome, Sayegh et al. report an average of 3.6 years of good postoperative vision (20/200 or better) in patients without preoperative glaucoma as compared to 1.3 years of good postoperative vision in patients with preexisting glaucoma. Overall, 20/200 or better vision was maintained for a mean period of 2.5 ± 2.0 years [5].
Ocular cicatricial pemphigoid is an autoimmune disease characterized by chronic inflammation, which presents with similar challenges as SJS. SJS and OCP are both characterized by a dysregulation of the immune response, expressing abnormal levels of various interleukins and cytokines and having a common end result of ulcerative tissue necrosis [8]. Outcomes of the Boston Type I Kpro in OCP are poor, and Boston Type II or OOKP may be necessary [9]. In one study [1] of 15 eyes receiving a Boston Type II Kpro for OCP, eight eyes required reimplantation at an average of 3.5 years or corneal patch grafting after approximately 1 year. Six eyes had 20/200 or better vision for more than 2 years and two eyes for more than 5 years. Complications included retinal or choroidal detachment, wound leak, and end-stage glaucoma.

Ocular surface disease associated with severe keratoconjunctivitis sicca may preclude the use of penetrating keratoplasty due to increased risk of persistent epithelial defects, secondary infectious keratitis, graft failure, and rejection. Additionally, long-standing uveitis from systemic immune disease such as lupus and rheumatoid arthritis may lead to corneal inflammation, band keratopathy, corneal neovascularization, and limbal stem cell deficiency, but these disease processes generally must be far advanced, and patients must have failed other treatment modalities prior to consideration of Kpro surgery.

Aniridia is a form of ocular dysgenesis associated with the absence of the palisades of Vogt and limbal stem cells, which results in conjunctivalization of the cornea with subsequent scarring (Fig. 5.3). Patients with aniridia often have aniridic keratopathy, which may be treated with keratolimbal allograft followed by penetrating keratoplasty or Kpro surgery. Visual potential may be limited by foveal and/or optic nerve hypoplasia and glaucoma associated. 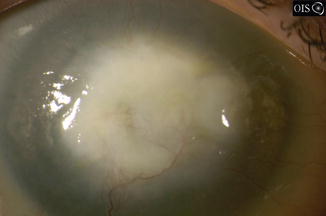 A 37-year-old with aniridia with dense corneal scarring with preoperative vision of 20/1000 left improved to 20/300 at 1 year being limited due to glaucoma
In one study, 15 of 16 patients with aniridia experienced visual improvement after implantation of a Boston Type I Kpro at or near their best-corrected visual acuity [7] with no cases of implant extrusion over a median of 17 months. Another study using the AlphaCor in 28 eyes demonstrated 62 % retention of prostheses up to 2 years after surgery [10]. The relative success of Kpros in aniridia and other non-autoimmune diseases is likely attributable to the lack of chronic inflammation and limited degree of dryness. Kpros may be considered as primary form of surgical intervention in aniridia due to the lack of need for systemic immunosuppression.

Chemical and thermal injuries can have a devastating impact on both intra- and extraocular structures resulting in corneal epithelial defects, stromal scarring, limbal stem cell deficiency, and glaucoma (Figs. 5.4 and 5.5). The loss of limbal stem cells results in conjunctivalization of the corneal surface, symblepharon formation, corneal melt, and neovascularization which result in a poor prognosis for graft survival with penetrating keratoplasty. 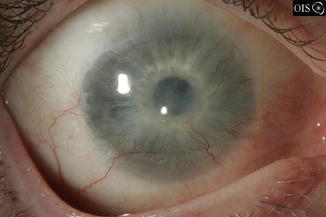 Chemical keratoconjunctivitis: a 37-year-old with anhydrous ammonia exposure bilaterally with resultant limbal stem cell deficiency with corneal opacification and neovascularization. Vision improved to 20/60 from hand motion postoperatively with a keratoprosthesis

A 36-year-old with bilateral thermal burn (fire) with preoperative vision 2/200 in the right eye (a) and hand motion in the left eye (b)
Kpro surgery has been shown to have better outcomes in the setting of chemical injury and noncicatrizing graft failure, with patients attaining better postoperative visual acuity for longer periods of postoperative follow-up as compared to penetrating keratoplasty [11, 12]. In one study, 17/20 eyes with chemical injury achieved a best-corrected visual acuity of 20/200 or better after undergoing Boston Type I Kpro surgery. Sixteen eyes maintained this vision over an average follow-up of 8.5 months [11].

Modern surgical management of pseudophakic (PBK) and aphakic bullous keratopathy (ABK) has focused on replacement of only the diseased endothelium. As such, Descemet’s stripping automated endothelial keratoplasty (DSAEK) and Descemet’s membrane endothelial keratoplasty (DMEK) are the procedures of choice for bullous keratopathy. In advanced cases with stromal scarring, lamellar or full-thickness procedures may be required, while Kpros may be considered after serial graft failures.

Herpetic keratitis, characterized by recurrent epithelial defects, neovascularization, and recurrent episodes of graft rejection, is an indication for Kpro surgery. Improvements in medical management in the 1980s and 1990s have reduced the need for penetrating keratoplasty in herpetic keratitis and have also improved the likelihood of graft survival in patients undergoing repeat transplantation. Primary or repeat penetrating keratoplasty has a poor prognosis with high chance of graft failure [15]. Kpro after graft failure from herpetic disease has been shown to be successful in achieving better visual outcomes and better retention, possibly from less graft antigenicity due to the punched-out donor cornea that is fit around the PMMA optic (Fig. 5.6) [16]. Furthermore, though patients with herpetic disease are more likely to be neurotrophic and have difficulty re-epithelializing the ocular surface, epithelialization is not necessary in the setting of a Kpro, particularly when a bandage contact lens is in place. Several studies evaluating Kpros as a primary or secondary procedure in the setting of herpetic keratitis have shown good visual improvement with retention of the Kpros and no significant complications up to 39 months postoperatively [4].

Tags: Keratoprostheses and Artificial Corneas
Mar 20, 2017 | Posted by admin in OPHTHALMOLOGY | Comments Off on Overview of Relevant Clinical Disorders and Their Relation to Keratoprosthesis
Premium Wordpress Themes by UFO Themes
WordPress theme by UFO themes