Oromandibular dystonia (OMD) is a neurologic disorder affecting both males and females with onset primarily in the fifth and sixth decades of life. It is characterized by repetitive, involuntary, patterned contractions or spasms of the masticatory, lingual, and perioral musculature. Typically the dystonic movements are action induced and can impair speech, mastication, and swallowing, and cause significant social embarrassment. OMD is a subset of cranial-cervical dystonias, and when the symptoms of OMD are coupled with blepharospasm, the condition is known as Meige’s syndrome. Like other focal dystonias, it is usually a primary condition thought to be related to an underlying disorder of the basal ganglia. However, it may also occur as a result of secondary causes such as drug exposure, Wilson’s disease, and peripheral injury such as dental procedures.1–3

Oromandibular dystonia may be classified as jaw opening, jaw closing, jaw deviation, and tongue protrusion sub-types, with most cases representing a combination of these subtypes. Perioral movements (depressor anguli oris [DAO], platysma) and head turning (sterno-cleidomastoid muscle [SCM]) may also be associated, but it is not clear whether they are compensatory to the OMD or part of a more complex multifocal dystonia such as Meige’s syndrome.

Patients should be evaluated for a family history of dystonia or the presence of other dystonias. A detailed drug and psychiatric history is also very important to exclude the possibility of tardive dystonia secondary to dopaminergic antagonists or neuroleptic drugs.1

Some OMDs may be alleviated by a sensory trick,4 or geste antagonistique, such as singing, chewing on a toothpick, placing an olive pit into the gingivobuccal sulcus, or scratching the chin. These sensory tricks afford only temporary symptomatic relief.

Oral agents remain one of the first-line medical treatments for OMD, and evaluation by a neurologist for consideration of such treatment is a prudent initial step. Botulinum neurotoxin (BoNT) injections can also be used to reduce or eliminate involuntary movements and are well established as a treatment since their first description by Brin and Blitzer5,6 in 1987. Patients with jaw-closing OMD tend to respond better than patients with the other types of movements. Imaging may reveal evidence of prior head trauma or basal ganglia abnormality. Blood tests are not routinely performed prior to initiation of BoNT therapy, although low serum ceruloplasmin and certain genetic markers may be consistent with the diagnosis of dystonia.

Involuntary spasms of the external (lateral) pterygoid muscles are responsible for jaw-deviation and jaw-protrusion movements. Treatment of these OMD movements begins with injecting the external pterygoids. This muscle consists of two heads; the superior head originates on the greater wing of the sphenoid bone, and the inferior head originates on the lateral surface of the lateral pterygoid plate and runs posterolateral. The superior and inferior heads converge to insert into the medial aspect of the condylar process of the mandible (Fig. 5.1). Unilateral action of these muscles causes lateral jaw excursion to the contralateral side. Bilateral action of these muscles causes jaw protrusion or jaw opening. The internal (medial) pterygoids are primarily jaw closers but can work with the external pterygoids in jaw deviation (Fig. 5.2).

Involuntary actions of the masseter, temporalis, and internal or medial pterygoid muscles are responsible for jaw-closing OMD movements (Fig. 5.3). Initial treatment involves injecting the masseter and temporalis muscles first and adding treatment of the internal pterygoid for nonresponsive cases or suboptimal results.

The masseter originates from the anterior two thirds of the zygomatic arch and the zygomatic process of the maxilla. It inserts on the inferior and lateral surface of the angle and lower ramus of the mandible (Fig. 5.4). The internal (or medial) pterygoid originates from the medial surface of the lateral pterygoid plate, pyramidal process of palatine bone, and maxillary tuberosity. It inserts on the medial angle of the mandible, forming a U-shaped sling around the inferior mandible border with the masseter. These two muscles elevate the mandible, enabling forced closure of the mouth.

The temporalis muscle is a broad fan-shaped muscle originating from the temporal lines on the parietal bone of the skull and inserting into the coronoid process of the mandible after passing medial to the zygomatic arch. It is covered by a strong thick fascia that can be felt as resistance when administering injections. It elevates and retracts the mandible (Fig. 5.5). 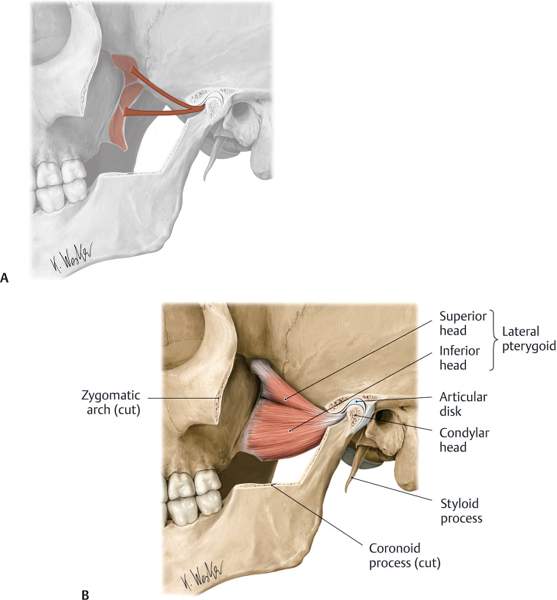 The OMDs of jaw opening are mostly due to involuntary movements of the submental muscles (digastrics, genioglossus, geniohyoid, mylohyoid, hyoglossus) and the external pterygoids (Fig. 5.6). The platysma can also function as a jaw opener, and its treatment is addressed in another chapter.

The digastric muscle has two bellies that insert into an intermediate tendon on the greater horn of the hyoid bone. The anterior belly originates from the digastric fossa on the anterior internal mandible, and the posterior belly originates on the mastoid process of the temporal bone. The muscles open the jaw when the temporalis and masseter are relaxed.

Tags: Botulinum Neurotoxin for Head and Neck Disorders
May 25, 2016 | Posted by admin in HEAD AND NECK SURGERY | Comments Off on Oromandibular Dystonia
Premium Wordpress Themes by UFO Themes
WordPress theme by UFO themes