of the Neonatal Airway

(a) Narrowest point of airway: Adult vs Neonate. Note the more superior position of cricoid ring in the neonatal airway vs adult. (Courtesy of David Low, CHOP). (b) Sagittal View of the Adult vs Neonatal Airway. Note the reduced nasopharyngeal space and larger occiput of the neonate contributing to the tendency for tongue based obstruction during airway emergency situations. (Courtesy of David Low, CHOP). (c) Cross section of the narrowest point of the airway: Neonates vs Adults, (adapted from Wheeler and Shanley, et al. eds. Resuscitation and Stabilization of the Critically Ill Child). Springer, 2009. (d) Major anatomic differences between infants and adults

The airway of the younger child is very different from that of the older child or adult, and these pediatric features are usually present until about age 8 or 9. After this age, the airway becomes more adult-like in configuration, and the generalist emergency physician is on more familiar grounds. There are many levels of differences from the nose and mouth to the tracheal bifurcation and, generally, more malacia of structures due to a relatively greater amount of connective tissue and weak supraglottic tissue. In general, the segments of the upper airway include the nasopharynx, oropharynx, hypopharynx, and larynx.

One of the most important factors in the infant’s anatomical differences is the nasal anatomy. It is long standing common knowledge amongst neonatal physicians and caregivers that the infant is an obligate nose breather until approximately 3–6 months of age [32]. The obvious consequence of this fact is that they are reliant upon patent nares for adequate ventilation. Even the smallest nasal congestion is thought to potentiate obstructive apnea. Due to a high metabolism, small lung volumes, and reduced functional residual capacity, the oxygen reserve is relatively decreased, which can relate to rapid desaturations and cyanosis. Interestingly, however, recent studies have shown that infants can mouth breathe during both spontaneous breathing and nasal occlusion. [3]. The term preferential nose breathers may be a better term as, under normal circumstances, the infant does breathe through the nose. Subsequently, any decrease in airway diameter due to secretions or inflammation can significantly add to the infant’s work of breathing. As such, rapid respiratory rate, grunting, and nasal flaring are key signs of respiratory distress in infants.
In considering the nasal anatomy, there are also some common conditions that obstruct the nasal cavity in neonates. Choanal stenosis/atresia, a posterior nasal obstruction, is seen approximately one in every 5,000–7,000 births and increasingly diagnosed with the utilization of high definition prenatal ultrasound. Rarely, nacrimal duct cyst or nasal mass can present as nasal obstruction and must also be ruled out by CT during the evaluation process. The surgical outcome for choanal stenosis/atresia is largely dependent upon the degree of bony atresia, size of the infant, and frequency of restenosis [25, 26, 42]. Congenital pyriform sinus aperture stenosis, also a rare condition, is a cause of nasal obstruction but a different entity than choanal atresia by virtue of location. In this case, obstruction occurs at the anterior nasal bony inlet, and the diagnosis carries genetic significance in that it is associated with holoprosencephaly, hypopituitarism and septo optic dysplasia [26, 42, 48]. Nonetheless, surgery is required for both conditions with stent placement and long hospitalization, giving rise to many potential airway obstructive episodes during the healing process. Other less common causes of nasal obstruction include nasal encephaloceles, nasal septal deviation, and tumor of the nasopharyngeal cavity (Fig. 2).

(a, b) CT scan of head showing: (a) Choanal atresia and (b) pyriform aperture stenosis. Note the differences in location of these embryologically different but similar clinical nasal obstructions. (Courtesy of Steve Sobol, CHOP Neonatal Airway Program)

The oropharynx consists mostly of the tongue and palatal structures. Macroglossia with tongue-based obstruction is frequently seen in neonates with certain genetic conditions such as trisomy 21 and Beckwith Weidmann syndrome, which can require tracheostomy in extreme cases. The palatal structures usually do not cause airway obstruction by themselves, unless congenital malformations of the palate occur causing complete oropharyngeal obstruction. In addition, tumors arising from the palate may be the source of oropharyngeal obstruction in rare cases (Fig. 3).

(a, b) Photographs of infants with complete oropharyngeal airway obstruction: (a) oropharyngeal teratoma and (b) Epignathus (Courtesy of Alan Flake MD, Children’s Hospital of Philadelphia)

Retrognathia and micrognathia cause life-threatening airway obstructions in neonates if either is present in a severe form. While retrognathia relates to a recessed position of the jaw, micrognathia relates to the actual size of the mandible with both causing tongue-based obstructions. Many genetic syndromes like Robin sequence and Stickler syndrome can be associated with these conditions and should be ruled out. Treatments such as tongue–lip adhesion and tracheostomy have long been the mainstay of treatment for tongue-based obstruction. Of particular interest, mandibular distraction osteogenesis has recently proven to be an effective technique in relieving the obstruction in a relatively short period of time (Fig. 4).

(a, b) Photographs of infants with severe Micrognathia (a and b), (Courtesy of Jesse Taylor MD, Children’s Hospital of Philadelphia)

In proportion to the adult, the infant tongue is larger and potentially more obstructive [45]. Although instrumental in the suck-and-swallow mechanism, the tongue can compromise the pulmonary status of the infant by falling to the back of the pharynx and causing an airway obstruction. Generalized neck muscle or pharyngeal muscle hypotonia can exist with other conditions and together create a tongue-based obstruction and airway emergency. It is well known and obvious to those caring for sick neonates that the tongue always seems too large for the mouth. As such, the tongue frequently impedes intubations and is one of the major causes of failure to maintain a stable airway. Conditions such as Trisomy 21 and Beckwith-Wiedemann syndrome are regularly associated with large tongues. Flexion may also provide a positional contribution to upper airway obstruction in these neonates. Many of these tongue-based obstruction syndromes are underappreciated and are often mistaken for central apnea, gastroesophageal reflux, or other cardiovascular episodes causing an unstable situation. During an emergency, insertion of an oral airway is important in maintaining a patent airway in these types of infants. In neonates, anything that is inserted into the nose or mouth can obstruct the airway further. However, in a spontaneously breathing infant a nasopharyngeal trumpet or a simple nasopharyngeal endotracheal tube is often underutilized and should be considered when intubation is impossible (Fig. 5). 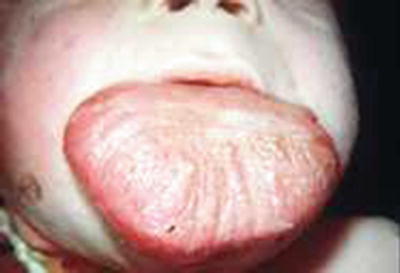 The hypopharynx includes the structures seen during intubation such as the epiglottis and vallecula, and the larynx is the entrance to the airway including both the true and false vocal cords.
Typically described as being cone-shaped with the narrowest segment at the level of the cricoid cartilage the infant larynx lies higher in the neck in relation to the cervical spine [27, 28] (Fig. 8). The larynx is also proportionally smaller, while the surrounding arytenoids and folds are larger relative to the surrounding larynx [26, 42]. The larynx descends as the infant grows into a child and is similar to an adult airway by the age of six. The most important structure, the epiglottis differs in infants from adults in three ways: it is proportionally longer, narrower, larger, less flexible, and often Omega-shaped. These factors may lend to airway obstruction under certain conditions and also make it extremely susceptible to trauma during intubating, suctioning, or examining the infant upper airway.
The supraglottic and glottic anatomy in the neonate is more compact and difficult to visualize for the inexperienced. The aryepiglottic folds, arytenoid cartilages, and epiglottis can all look like one structure when secretions and edema obscure a clear view. Critical landmarks for exposure include the base of the tongue, tip of epiglottis, and vallecula. When intubating with a rigid blade, knowledge of these landmarks is essential to successful intubation (Fig. 6).

(a–b) Proper view during laryngoscopy of the neonate. Note the correct position of the blade in relation to the glottis opening. Compare with the detailed anatomic drawing of the neonatal airway showing all structures in relation to one another. (adapted from Weissman and Donn. Steve Donn, et al. Manual of Neonatal Respiratory Care, 3rd ed. Springer 2012. (c) (Courtesy of David Low, CHOP)
Laryngomalacia is a major and common problem in certain neonates resulting from a combination of the aforementioned anatomic characteristics and the physics of airflow through a tube (Bernoulli’s effect of less pressure on tubular walls with fast flow and Venturi effect of collapse of these low pressure walls with inspiration) [26, 42]. Recent use of supraglottoplasty surgery with release of tight aryepiglottic folds early in neonates with severe laryngomalacia has allowed earlier feeding and discharge. Previously many of these neonates experienced repeated bouts of airway obstruction, some even going on to tracheostomy (Fig. 7).

(a–c) Photographs showing severe laryngomalacia. (Courtesy of Steve Sobol, Neonatal Airway Program, CHOP)
The larynx is separated from the trachea by the cricoid cartilage which is and is entirely composed of cartilage [26, 42].
The narrowest point in the infant airway is the cricoid cartilage ring (in contrast to adults—which is the epiglottis). Due to the narrowing of the airway of this cricoid ring, many people refer to the infant airway as funnel shaped. A 3-D image of the neonatal trachea looks more like an “hourglass” than a tube. Again, it is the cartilaginous cricoid cartilage making up the narrowest part of neonatal airway with a point of resistance at the cricoid ring, often a common area of difficulty in a preterm infant during intubation of a difficult/critical airway by most neonatologists (Fig. 8a, b). This natural narrowing is the reason that uncuffed endotracheal tubes are used almost exclusively in neonates. Anatomically, this area forms a complete cartilaginous ring approximately 2 cm in length starting below the vocal cords. Knowledge of these airway differences is the most important factor in determining the skill and ease of airway visualization and access and ultimate success in intubation [27, 28].

(a, b) Differences in the size and location of cricothyoid membrane, cricoid and thyroid cartilage in infants and adult. (Courtesy of David Low, CHOP)

The cricoid cartilage marks the true beginning of the lower airway.
The first structure encountered is the trachea, which ends at the carina. The tracheal size and length vary with age (Fig. 9).

Table of tracheal dimensions: neonates vs adults (Adapted from Chap. 25, Ian Jacobs, MD Fundamentals of Pediatric Surgery, in Peter Mattei editor: Springer
The neonatal trachea is much shorter, narrower, and more compact than the adult trachea proportionally, and a high tracheal position at C1-2 can result in anteroposterior differences. There are major differences in the length and diameter of the trachea at different age groups (Fig. 9). The trachea is “C” shaped with soft trachealis muscle posteriorly and a 3:1 ratio of rings/muscle circumference. The soft muscle provides flexibility during breathing but can be the source of severe collapse in cases of significant tracheomalacia [45]. At the level of the cricoid ring any mucosal edema will encroach on the lumen, resulting in exponential increases in resistance to airflow per Poiseuille’s law (that is, air flow is proportional to the fourth power of the airway radius) [27, 28].

The neck of the infant compared to the adult is much shorter, composed of more subcutaneous fat, and often requires different maneuvers while intubating when compared to a child or an adult. Cricoid pressure is often necessary during intubation to overcome the limited space and lack of anatomical landmarks easily seen in adults or children.

The diameter of the pediatric airway is much smaller than the adult airway, making it far more vulnerable to obstruction by either foreign objects or edema. Minor narrowing from respiratory infections or bronchospasm may result in profound airway difficulties in the pediatric patient. Airflow through a pipe like the bronchi is described by Poiseuille’s equation. Airflow in the narrowed airway meets resistance that is described by an inverse proportion to the fourth power of the radius of the airway for laminar airflow, and to the fifth power for turbulent airflow (Fig. 10). 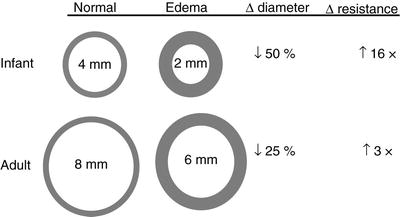 (R is resistance and r is the radius)
Only gold members can continue reading. Log In or Register to continue