Vocal characteristics and qualities are determined by fine-tuning the vocal fold vibratory patterns during phonation. Since Rethi’s first reported recognition of the mucosal wave in 1897 and through use of high-speed photography of the vibratory cycle, interest in studying the details of vocal fold oscillation has increased.1 A variety of vocal fold vibratory parameters have come to the forefront for study, including symmetry and phase.

At the onset of normal vocal fold vibration, the vocal folds are adducted. Evidence from stroboscopic imaging indicates that they begin their displacement away from the midline in unison, achieve their maximum point of displacement at the same time (and to the same extent), and arrive back at the midline at the same time. This mirror-like symmetry pertains not only to vibration in the horizontal plane but also to vibration in the vertical plane. When the vocal folds are closing, contact is made, first, between the lower margins of the folds and then extending to the superior margins. During opening, the same pattern occurs; that is, separation between the folds begins along their lower margins and continues vertically to their superior margins (Video Clip 3). The separation, or opening, and approximation, or closing, components of a vibratory cycle of the vocal folds are described as phases, and the symmetry of fold behavior across these phases is referred to as phase symmetry.2–4

The portion of a vibratory cycle in which the folds are open (which includes opening and closing) is referred to as the open phase of vibration, and the portion when the folds are approximated is defined as the closed phase of vibration. At comfortable pitch and loudness (or modal voice), the open and closed phases are approximately equal in duration (see Chapter 10, Fig. 10.3A). The actual extent of displacement and the time spent in displacement and return to midline may vary according to several factors. For example, the amount of time the vocal folds are open, opening, closing, and closed in each cycle is related, in part, to the regulation of airflow through the glottis. The extent of displacement is influenced by other factors, including vocal intensity (Video Clip 6).5,6 These differences notwithstanding, the “mirroring” of the two vocal folds in amplitude and timing has generally been considered characteristic of normal vibration and normal voice.2–4 Similarly, significant deviations from such symmetry have been associated with abnormal vibration and voice.2

Most authors rate symmetry dichotomously as either present or absent; symmetric versus asymmetric. Colton and colleagues describe a more detailed rating system including normal versus open phase predominates sometimes or always; or normal versus closed phase predominates sometimes or always.7 The significance of phase determination is that greater glottal efficiency with improved flow conversion is seen when the cycle is in-phase.6

The evaluation of finer vocal fold vibratory qualities like symmetry and phase is not possible when viewing the vocal folds with a constant light source. Stroboscopy uses high-speed flashes of light that are synchronized on sequential parts of the vibratory cycle and allow for an illusion of motion and the ability to appreciate whether the cycle is symmetric and/or in-phase. Careful review of the virtual slow-motion recordings made during stroboscopy allows the clinician to evaluate the extent and timing of movement of the right and left vocal folds relative to each other (Video Clip 7). Vocal folds that begin to open simultaneously, that move laterally at the same speed and to the same extent, then begin to close at the same time, move to the midline at the same speed, and then come together simultaneously, through several cycles of vibration, are considered to be vibrating symmetrically (Fig. 15.1; Video Clips 1, 3, 5, 6, 15, and 21).

Dejonckere and colleagues studied the reliability of experienced clinicians in rating a variety of vibratory parameters, including symmetry.8 Low reliability in rating symmetry was found when seven experienced laryngologists and/or phoniatricians rated 30 stroboscopic images. Thus, whereas symmetry is an important factor of vocal fold vibration, the reliability of assessing it, at least via stroboscopy, is not completely clear.

To determine the phase characteristics of vibration using stroboscopy, the “montage” function is often used. This feature allows the clinician to choose a representative sample of vibration from the study. The software then places 10 images from that point in the study, representing one cycle of vibration, on the screen simultaneously. The number of images with the vocal folds open during the cycle can be counted and compared with the number of images with the vocal folds closed during the cycle. Normal open phase during phona-tion at a comfortable pitch and loudness is 50% (Fig. 15.2). 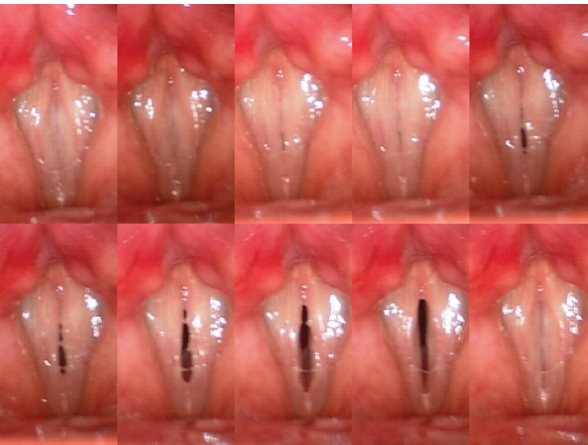 As vocal fold vibration is dependent not only on the myoelastic properties of the vocal fold epithelium and lamina propria but also on control of the laryngeal intrinsic musculature and on coordinated pulmonary support, it is not unexpected that some variations would exist in otherwise asymptomatic individuals. Doellinger and colleagues assessed the effect of vocal load on symmetry of vibration in a normal subject via phonovibrogram and found asymmetric, left versus right, movement at the end of the day, indicating that “fatigue” in otherwise healthy individuals may result in “abnormal” symmetry.9 Likewise, Shaw and Deliyski assessed 52 healthy subjects via stroboscopy, high-speed videoendoscopy, and kymography. They found asymmetry of vocal fold vibration during modal and pressed phonation leading them to question the clinical utility of this vibratory parameter.10 In another study of normal subjects, Elias and colleagues evaluated 65 asymptomatic, classically trained singing students. They found that four of the students had prominent asymmetry of horizontal or lateromedial vocal fold excursion despite a lack of symptoms. The authors concluded that some degree of variability in vibratory symmetry did not appear to have a significant impact on the subjects’ perceptions of their voice, possibly owing to technical training.11 Kendall studied 50 healthy volunteers and found periods of asymmetric vibration in 26%.12

The effect of pitch on symmetry has also been evaluated (Video Clip 5). Haben and associates studied videostroboscopic images in 57 normal subjects (30 females and 27 males) and found 33% of subjects exhibited lateral phase asymmetry in their upper registers with 10.5% demonstrating asymmetry in both chest and upper registers.3 However, Fong assessed symmetry at different pitch levels (modal, vocal fry, falsetto) (Video Clip 4) in 15 normal subjects with high-speed videography and found no significant difference in the incidence of asymmetry based on pitch.13 In addition, Jiang and colleagues studied the effect of physiologic alterations on pitch and symmetry. They studied vocal fold vibration from an infraglottic view and found that thyroarytenoid muscle contraction resulted in larger amplitudes of vibration with a concurrent decrease of the vibratory frequency and increased vibratory asymmetry. In contrast, increased airflow through the glottis resulted in smaller amplitudes of vibration and minimized vibratory asymmetry while increasing vibratory frequency. Vocal fold lengthening was also shown to decrease vibration amplitude with a resultant increase in vibratory frequency and decreased asymmetry.5 This conflicting evidence, even in normal subjects, underscores the importance of accurate interpretation of asymmetry associated with pitch or frequency in dysphonic patients. In short, some asymmetry may be “normal,” and asymmetry may not always explain an individual patient’s dysphonia.

Pontes and colleagues evaluated the effect of age on phase symmetry.14 They reviewed 50 laryngeal imaging studies from young (20 to 45 years) individuals and compared them with 50 imaging studies performed in older (65 to 85 years) individuals. The results of the study revealed abnormal vibratory patterns predominately in the older group. Specifically, phase and amplitude asymmetry was seen more frequently in the older group despite a lack of vocal complaints among subjects. Biever and Bless also looked at the effect of aging on vibratory patterns. They evaluated 40 asymptomatic females, 20 young versus 20 old, and found that older women demonstrated 15% asymmetry versus no asymmetry in the younger group.15

Woo studied 65 normal subjects with simultaneous stroboscopy and EGG at different pitch and loudness levels (Video Clips 5 and 6).6 When vocal intensity or loudness was increased, males in the study demonstrated a slight increase in the amount of asymmetric vibration for all pitch levels. Males also demonstrated a longer closed phase for all pitch levels when compared with the females in the study. Both groups had an increase in the closed phase as vocal intensity increased. In general, Woo concluded that the open phase of the cycle tends to vary with variations in the frequency of phonation, while the closing phase of the cycle changes with variation in the intensity of phonation.

The importance of hydration for vocal health is emphasized throughout the voice literature with varying amounts being recommended. However, the impact of hydration on vibratory symmetry and phase closure has not been established. Fujita and colleagues looked at the effects of hydration on vibration via videokymography and found that individuals that were better hydrated demonstrated an increase in the closed phase of the cycle.16

The intricate vibratory patterns of the vocal folds are subject to many different influences. Contractions of the intrinsic laryngeal musculature interact with steady airflow from the pulmonary system, with support from the abdominal musculature, to create vibration. As described by Woo, “good vocal function requires symmetric vibration with the vocal folds on the same vertical level, good phase symmetry, and the ability to open and close rapidly to modulate airflow.”6 In general, vocal folds vibrate in a mirror image of each other in terms of symmetry and phase properties. Asymmetric, out-of-phase vibration is more frequently seen in pathologic states, in particular, where there is a differential in the mass or tone between the two vocal folds, as seen with lesions and unilateral vocal fold paralysis or with neurologic voice disorders such as spasmodic dysphonia. On the other hand, the evaluation of specific vibratory factors like symmetry and phase in patients with voice symptoms must consider the variations observed in healthy individuals prior to deciding that any one abnormality seen on examination is the cause of specific voice complaints. Some variations in normal individuals are found with changes in register, vocal intensity, fatigue, and advancing age. Thus, abnormalities observed in symmetry and phase on laryngeal examination need to be considered with the rest of the physical findings, acoustic measures, and the patient’s symptoms to determine whether this finding alone is indicative of underlying pathology.

4. Thompson DM, Maragos NE, Edwards BW. The study of vocal fold vibratory patterns in patients with unilateral vocal fold paralysis before and after type I thyroplasty with or without arytenoid adduction. Laryngoscope 1995;105(5 Pt 1):481–486