There is ample evidence of variability in the “normal” larynx. Investigators using a broad array of investigative techniques directed toward either structure or function have contributed to this information base. Structural differences are reflected in size, shape, and, in particular, symmetry from right to left. For example, in a study of human cadaver larynges, Hirano et al. described asymmetry in all samples considered, regardless of age or gender.1 Asymmetries were identified in the thyroid lamina, with the right tending to tilt laterally and the left medially. Further, the thyroid cartilage tended to shift right, against the cricoid cartilage. The right cricoarytenoid joint was typically located slightly more laterally, posteriorly, and inferiorly compared with the left joint.

Other authors have reported similar variability in the posterior larynx, as well as in the thyroid cartilage.2 Reviewing computed tomography (CT) scans of the larynx, these investigators noted that the thyroid lamina in the majority of subjects was longer in the anteroposterior direction on the left side compared with the right. They related this finding to their observation that the most frequent pattern of corniculate cartilage crossover on vocal fold adduction involved the right crossing in front of or over the left. That is, the left aryepiglottic fold, positioned more posteriorly than the right due to the longer length of the left thyroid lamina, is likely to remain posterior to the right on adduction. Differences in the shape of the thyroid lamina, possibly associated with aging, have also been described. Honjo et al. reported medial displacement of one false vocal fold in 10 elderly males.3 CT scans of the underlying structures revealed a marked concavity of the thyroid ala on the same side as the false-fold protrusion.

In a study of 109 normal subjects, Lindestad et al. noted several types of asymmetries on vocal fold adduction assessed with rigid endoscopy.4 The most common involved different placements of the corniculate or cuneiform cartilages, observed in 66% of individuals examined. Other asymmetries included one corniculate cartilage crossing over the other and differences in the angles of the aryepiglottic fold to the epiglottis. Of note, abduction asymmetries were rare in this group of normal individuals.

Such evidence of asymmetries in the paired structures of the larynx, though not uncommon in other bodily structures, is perhaps surprising in view of the coordination and symmetry required for normal vocal fold vibration and voice. As noted by Wang, evidence from human laryngeal embryologic development that the glottis and arytenoid cartilages are formed in adduction, not abduction, may offer one explanation for how vocal process approximation is achieved for normal vocalization.5 Filho et al., examining characteristics of the vocal folds in 24 human cadavers, reported no significant within-subject differences in length, width, or thickness from right to left.6 If the vocal folds demonstrate greater symmetry in size and shape than other laryngeal structures, this may further explain how normal vibratory behavior is achieved. If and how other compensatory mechanisms contribute to this process is not clear.

The longer length of the left recurrent laryngeal nerve, compared with the right, represents a particularly intriguing example of normal variability that has long been of interest to researchers and clinicians. The question raised is whether there are conduction time or other asymmetries that could account for coordination of bilateral laryngeal events, such as the opening and closing of the vocal folds. It has been suggested that, as the left recurrent nerve lengthens with the descent of the aortic arch, faster fibers may be preferentially retained in the right to left corticobulbar tract compared with the left to right corticobulbar tract.7,8 Faster conduction times in the longer nerve would, of course, seem to provide a basis for the coordination observed in abduction and adduction and perhaps in other vocal fold behaviors.

Further evidence of variability, between individuals, but also across tasks and over time within the same individual, has been reported for voicing behaviors of the vocal folds. Electromyographic data reported by Poletto et al. have suggested that activation patterns of the cricothyroid and thyroarytenoid muscles on the same side demonstrated as high, or higher, correlations than activation patterns between the same muscles on opposite sides.9 Digital high-speed laryngeal imaging of an individual speaker over a time period of 2 days revealed evidence of variability in opening and closing patterns as well as asymmetries between the right and left vocal folds that appeared related to voice usage, or vocal “loading.”10

A stroboscopic examination of vibratory behavior provides additional evidence of normal variability across age and gender. For example, Bless and Hirano reported that closed phases of vibratory cycles tended to be longer and more complete in males than in females.11 Children demonstrated a shorter closed phase than that of adult males, as well as larger posterior chinks. Older individuals were characterized as demonstrating lower amplitudes of vibratory displacement and greater asymmetry than that of their younger counterparts. Bonilha et al., using multiple imaging techniques, reported both left-right and anterior-posterior phase asymmetries in most of the 52 normal adult speakers examined. The findings were noted for both habitual and pressed phonation and were typically judged as mild.12

At some point, our expectation is that “normal” variability along the continuum of a laryngeal structure or behavior will become “abnormal.” But even here, differentiation may not always be straightforward. For example, Elias et al., in stroboscopic examinations of professional singers with no vocal complaints, reported frequent observations of “abnormal” laryngeal findings, including evidence of reflux laryngitis, small benign lesions, varicosities, vibratory asymmetries, and weakness.13 Complicating the matter further are frequent reports of poor reliability (or large variability) among examiners attempting to characterize the same vocal fold behavior, as well as the voice produced by the behavior.14–17 What appears more or less normal to one observer or listener, for example, may seem less so to another, depending on many factors.

Several examples of normal variability in laryngeal structures and behaviors described here can be observed on routine clinical examination. In our experience, they are particularly well observed with rigid endoscopy, though variability is common to all imaging techniques discussed in this text. In the remainder of this chapter, examples of such observations, all based on rigid endoscopic examination, will be presented. For comparison, examples will range from very typical to less typical. The examples presented were considered within the range of “normal” by the laryngologists and clinicians who identified them. None of the observations presented was believed to be symptomatic in the individual in whom it was identified or to require intervention. 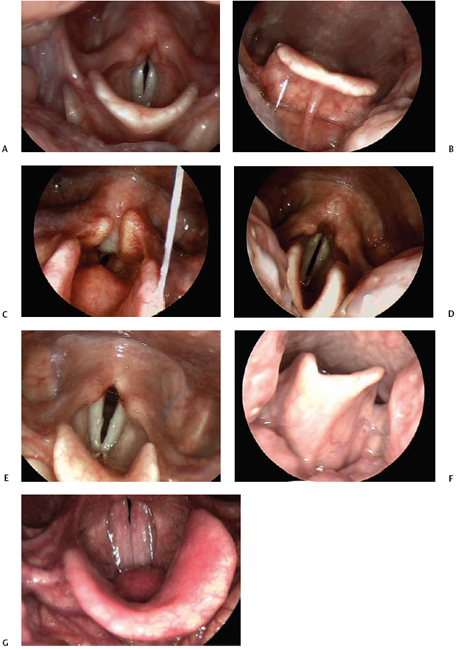 Interestingly, Langmore has suggested that penetration of swallowed materials into the airway may be facilitated or hindered by epiglottic shape.18 For example, an epiglottis that is relatively flat and lies against the base of the tongue at rest may obliterate the vallecular space and make it easier for bolus material to enter the laryngeal vestibule. We might also suspect that the somewhat omega-shaped epiglottis in Fig. 6.1C could facilitate airway protection, serving to divert bolus material around the larynx. Incidentally, an omega-shaped epiglottis in children has been associated with laryngomalacia, but it is not infrequently observed in adults on clinical exam. In Fig. 6.1B, the vallecular space is quite prominent, whereas in Fig. 6.1D, it is generally obscured. Some authors have associated a curled epiglottis that touches the tongue base at rest possibly with a globus sensation.19 In Fig. 6.1F, both the position and angle of the cartilage make visualization with rigid endoscopy difficult. In Fig. 6.1G, the pediole of the epiglottis is quite prominent.

As previously discussed, the arytenoid cartilages, with the smaller corniculate and cuneiform cartilages composing their most superior portions, also vary substantially from left to right in many individuals. Examples are presented in Fig. 6.2. In Fig. 6.2A, the structures appear quite symmetric in size, shape, and relative location. In Fig. 6.2B–D, significant variability is apparent. Consistent with the findings of Lindestad et al., when asymmetry is present, it is more common for the left side to be located posterior relative to the right.4 In all examples presented, arytenoid function was appropriate on abduction and adduction of the vocal folds. 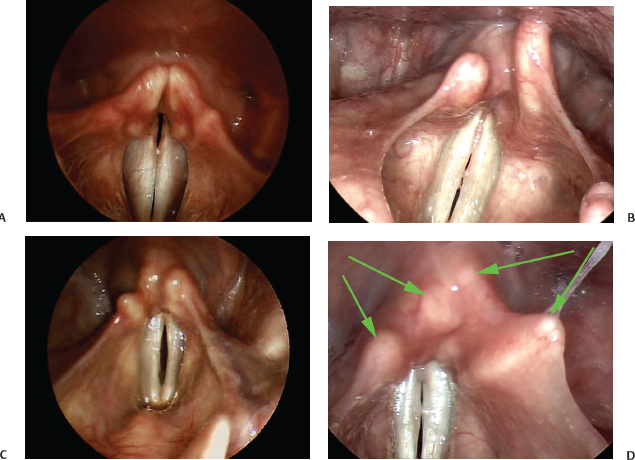 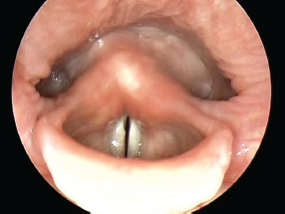 Fig. 6.3 The left pyriform recess appears larger in this example.

Most typically in our experience, the pyriform sinuses appear approximately symmetrical and equal in size from side to side. Occasionally, however, one may seem to be smaller than the other, as in Fig. 6.3. Obviously, if a patient is turning the head to one side or the other, this will influence the size of the space. In elderly individuals, compared with younger individuals, the pyriform recesses may also appear to be deeper.

In Fig. 6.3, there is little evidence of the greater cornua of the hyoid bone present in the pharynx. This is in marked contrast with Fig. 6.4, in which these horns are unusually prominent.

Cysts, if not “normal,” may nonetheless be benign and asymptomatic, not requiring intervention. Examples of vallecular or aryepiglottic cysts are presented in Fig. 6.5.

In Fig. 6.6, a slight notch in the uvula is apparent. This is not an uncommon observation, and is not indicative of a “bifid” uvula. In some individuals, the uvula is quite long and appears to separate only slightly from the tongue during production of “ee.” If so, examination of the larynx with a rigid endoscope or mirror may be difficult. 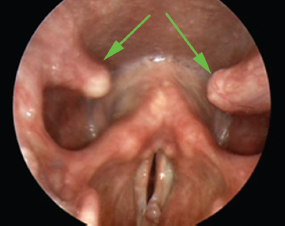 Fig. 6.4 The greater cornua of the hyoid bone project into the pharynx in this example (green arrows).

In Fig. 6.7, closure patterns commonly observed on rigid endoscopic examination are presented. All three examples are of normal speakers with no vocal complaints. In Fig. 6.7A, the vocal folds are adducted along the posterior vocal processes. Though typical, it can also be observed in individuals with some degree of glottic incompetence for voicing and may represent an adaptive response. In such cases, there will likely be evidence of thinness or bowing of the true vocal folds, as well. In Fig. 6.7B, a slight gap or chink is present between the vocal folds posteriorly. Secretions and mild erythema are also apparent on the vocal folds in this image. In Fig. 6.7C, there are slight gaps both anteriorly and posteriorly. The subjects in the figures were phonating at comfortable frequencies and intensities. Contact patterns can change depending on these variables, as well as with effort. See Chapter 15 for a more in-depth discussion of the variations in the normal glottic configuration.

The material presented here is not intended to be a comprehensive review of all aspects of normal laryngeal variability. Rather, the purpose is to introduce clinicians and, in particular, those who may be new to laryngeal imaging to the wide range of normal observations possible on clinical examination of the larynx. Further, based on studies representing a variety of investigational techniques, we have attempted to present evidence that offers explanations for, and speculation about, the examples of normal variability presented. Perhaps it is most important for clinicians to simply be aware that there is indeed a wide range of normal laryngeal and vocal presentation and to recognize when a deviation from normal is significant. Many contributors to this text have provided examples of normal and abnormal laryngeal function. Included here is a clip (Video Clip 1) of a normal subject engaging in a range of vocal tasks filmed with rigid endoscopy and stroboscopy. It will hopefully serve to illustrate, within a single subject, variability in laryngeal function associated with changes in frequency, intensity, and phonational mode. Changes in vibratory and mucosal displacements, length characteristics of the vocal folds, and involvement of other laryngeal structures are readily observed. The reader is encouraged to review this study, as well as others, and to perform as many examinations of normal laryngeal and vocal function as possible prior to engaging in the clinical assessment of patients with disordered voice. 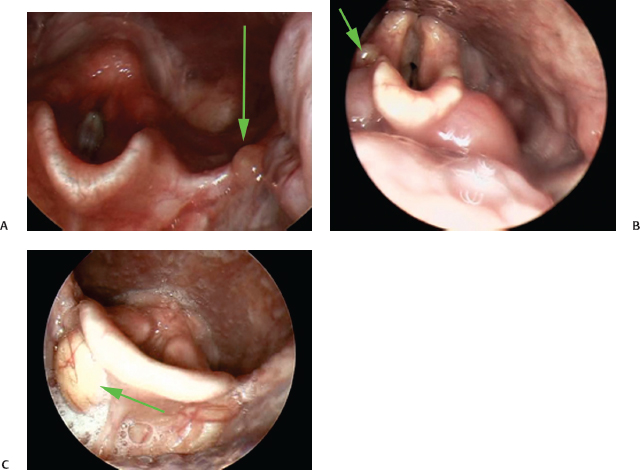 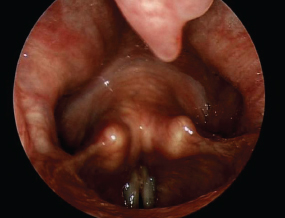 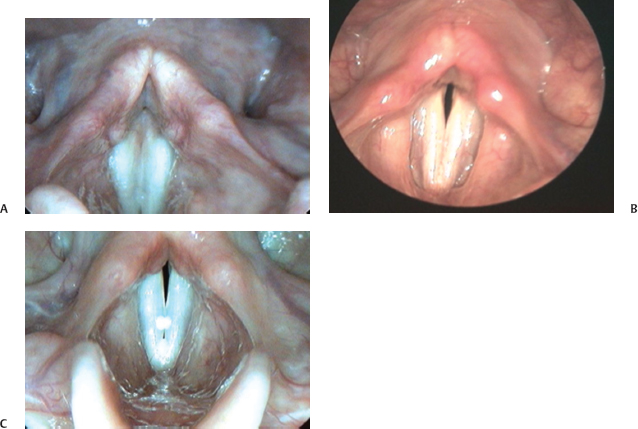 8. Peters M. Cerebral asymmetry for speech and the asymmetry in path lengths for the right and left recurrent nerves. Brain Lang 1992;43:349–352