1. Pondered increase of optic cylinder’s diameter through biometric assessment of the optical power
2. Total removal of the iris
3. Cryoextraction of the lens whether opaque or transparent
4. Anterior vitrectomy
5. Use of biological glue to reattach the periosteum
6. Lamellar keratectomy including Bowman’s membrane
7. Use of cheek’s mucosa, thicker and more abundant than labial’s
8. Joining of 2 osteodental laminae
9. Use of impacted teeth
10. Use of blood relation’s teeth
11. Use of Eckardt’s prosthesis in retinal detachment
12. Double-thread cyclodiastasis with a single sclerotomy (due to glaucoma)
13. Posterior drainage tube (refractory glaucoma) substituted during the last 5 years using Ahmed’s valve

Both in the MOOKP and in the OOKP – from which MOOKP originated – the cornea is replaced by the optic cylinder, made of polymethyl methacrylate (PMMA), which is joined to a biological haptic made of living human tissue which really is an autologous osteodental lamina, obtained from the dentine of a monoradicular tooth and the bone surrounding it and from all the elements contributing to its vitality (Fig. 21.1).

MOOKP scheme
The MOOKP’s and OOKP’s biological peculiarities recall and reproduce the same conditions that a dental system is taking advantage of inside the oral cavity, where the gingival mucosa joins to the alveolodental ligament of the tooth’s neck, creating a true epithelial seal (inside the mouth) able to defend the tooth against infections.
Histological studies [5–7] and clinical data [8–10] reveal how the anatomo-functional results remain the same even on a long period (40 years) [11]. These results are a natural consequence of the biological properties of the osteodental lamina [12] that has to be taken out very carefully in order to save its vitality.
The biological properties of the osteodental lamina are as follows:

Dentine’s hardness
Dentine is a highly mineralized tissue with very slow metabolism and cellular turnover, providing a solid and longtime adhesion to the acrylic resin used to join the PMMA optic cylinder to the dentine itself.
2.

Anterior chamber epithelial seal
In all types of keratoprostheses, the optic part must not be obscured by the epithelial tissue covering the prosthesis, to enable the patient to see. This interruption of the epithelial tissue that is always taking place no matter which tissue (cornea-conjunctiva, buccal mucosa, skin) is covering the prosthesis represents a locus minoris resistentiae that may foster infections, retroprosthetic membranes, and expulsion of the prosthesis. Both in the OOKP and the MOOKP, the epithelium of the buccal mucosa covering the prosthesis, once it has been interrupted, proliferates along the optic cylinder and, then, it steadily joins the alveolodental ligament and the dentine which, on its turn, is joined to the optic cylinder (Figs. 21.2 and 21.3). All these, while reproducing the same conditions we just mentioned, in the oral cavity, are taking place at the level of the tooth’s neck (Fig. 21.4), where a seal, an indissoluble tie between the epithelium of the gingival mucosa and the alveolodental ligament, is established. 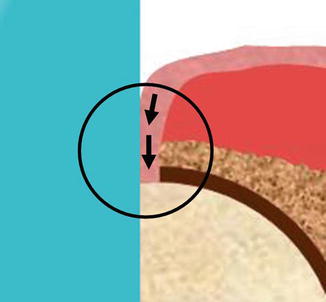 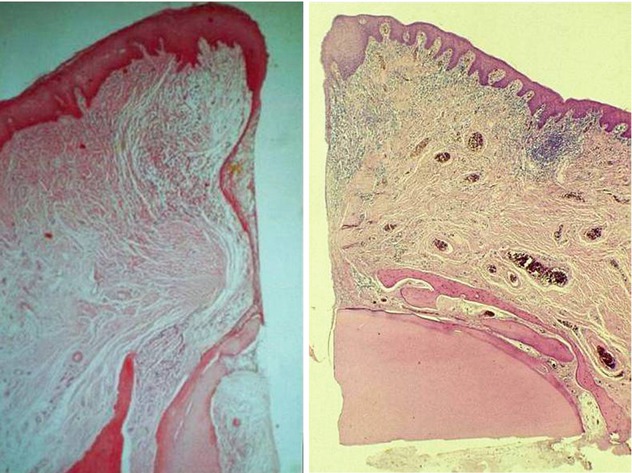 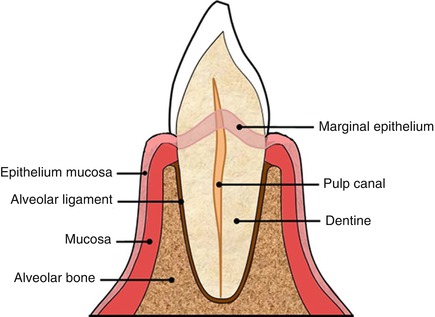 Absence of vascularized tissue in contact with cornea
Both in OOKP and MOOKP, dentine represents the surface of the osteodental lamina in contact with the cornea and is completely lacking in connective tissue and blood vessels. For this particular reason, no retroprosthetic membranes are ever developing, whose presence, on the other hand, is always possible when, in between the cornea and the prosthesis, either by accident or due to the surgeon’s choice, there is some vascularized tissue.
4.

Absence of buccal mucosa’s remodeling
The buccal mucosa used to cover various types of keratoprostheses, and especially MOOKPs and OOKPs, in the medium to long period, is growing thinner, is remodeling, and, then, is conjunctivalizing. All these transformations are helping the onset of infections, retroprosthetic membranes, uveitis, and expulsions. These remodeling phenomena that are present in the other keratoprostheses covered by buccal mucosa are worthless in the MOOKP as the mucosa covering the osteodental lamina is maintaining its own identity and is not really changing, as it is covering the same tissue it protects inside the mouth [13].
5.

Heterotopic autograft
If we carefully assess all the different components of the osteodental lamina, we cannot but conclude that in addition to being the haptic of a keratoprosthesis, it is a heterotopic autograft, so it enjoys all the properties of immunological defense, repair, and proliferation that are peculiar to the living tissues. These fundamental properties are not present in the biocompatible haptics and are significantly reduced in the bio-integrated haptics due to the scarce living tissue that is involved in their structure.

The osteo-odonto-keratoprosthesis according to Falcinelli (MOOKP) may be performed with any types of corneal alterations, even the most serious (Figs. 21.5, 21.6, and 21.7) which cannot be treated, with reasonable expectations of success, either with any corneal transplant techniques, including the stem cells, or with other kinds of keratoprostheses different from ours (MOOKP) (Table 21.2). 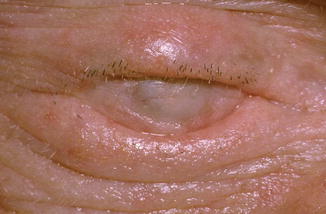 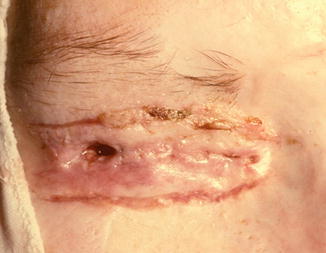 From: Hille et al. [9].
In the presence of a bilateral corneal blindness, MOOKP may be performed either in only one or in both eyes. MOOKP performed in both eyes gave excellent results. A bilateral intervention is important especially when, in the presence of an opaque and deeply altered cornea, glaucoma is present too. In these cases, the visual field and the optic disk cannot be assessed, and it is often impossible to obtain a trustworthy tonometry finding. The only possible way to monitor the glaucoma is by the disk evaluation and the performance of a visual field, though with the presence of a MOOKP.
In a patient having one normal eye and the other suffering from an alteration of the cornea needing an MOOKP, this is not advisable.

Phthisis of bulb: risk of complications is very high and so is the possibility of lost of the remaining perception of light.
3.

Age under 14, because of incomplete development of dental arches
5.

Defective light perception (for instance, terminal stage glaucoma) which cannot really be considered as an absolute contraindication, an amazing and unexpected visual recovery happened to be experienced by some patients suffering from it. In these cases, patients must be informed of the possibility of a poor functional recovery.
2.

Patients who cannot undergo medical tests during their follow-up. Patients and their family members must be conscious of the importance of periodical postoperative tests and of the possibility of future complications, even a long time after the surgery, which can be treated only by the surgeon who performed the operation or experienced colleagues of his/her.

The MOOKP is performed in two fundamental surgical stages, with a 3-month interval in between them, with a smaller additional intermediate intervention performed 1 month later the first one. The two stages plus a short intermediate stage represent the latest modification we made to Strampelli’s original technique in order to make the last stage safer, as we will see later in details, namely, the implant of the prosthesis into the blind eye.
MOOKP first stage includes:

Preparation of anterior surface of the eye
1B.

Preparation of anterior segment of the eye
2.

21.3.1.1 Preparation of the Anterior Surface of the Eye

At conjunctival level, even in the presence of light alterations (hyperemia, poor fibrotic and/or degenerative phenomena), a complete and irreversible involvement of the stem cells is always observed. In the majority of cases, fibrotic-degenerative phenomena are very evident and complicated by serious ocular dryness. Conjunctiva may look thickened, and partial or complete symblepharon may be present and sometimes an ankyloblepharon. These alterations, characterized by different extension, seriousness, and localization, represent a problem that cannot be neglected and need different surgical approaches.
If the cornea is free from conjunctiva and fibrotic tissues, it is advisable to perform a peritomy horizontally expanded to the canthi. On the contrary, if the cornea is covered by conjunctival or cicatricial tissue, the conjunctiva has to be incised at the intermediate point between the two eyelids, following the palpebral edges. The incision in between the two eyelids is performed even in the presence of a total symblepharon (Fig. 21.8). 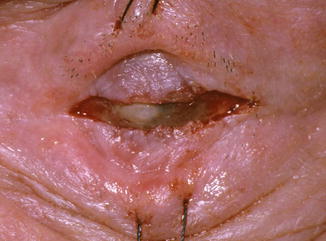 The incision between the two eyelids is performed even in the presence of a total symblepharon
After the peritomy or the horizontal incision, both the cornea and the sclera are laid bare by delicately detaching, toward the upper and lower fornices, the possible conjunctival or palpebral fibrotic and/or degenerated tissue covering the ocular surface. Then, a Flieringa ring is applied over the sclera. The insertions of the rectus muscles are hooked by traction threads.
Only gold members can continue reading. Log In or Register to continue