Inflammatory orbital disorders become more common in the second decade of life, when causes of orbital disease increasingly resemble those found in adulthood.

The principal inflammations can be divided into non-specific orbital inflammatory syndromes (NSOIS) (also known as idiopathic orbital inflammation,1 and previously known as “inflammatory pseudotumor”) and specific causes such as sarcoidosis and Wegener’s granulomatosis, both of which are rare but potentially life-threatening. The incidence of thyroid orbitopathy increases in the teenage years, and this is discussed briefly.

The child’s orbit is occasionally the site of acute or subacute inflammation of unknown cause.2,3 This entity was previously known as “orbital inflammatory pseudotumor,”4 a term which, with the advent of CT and MRI and pathologic studies, has been abandoned. Instead, the site of inflammation is identified,5,6 including anterior, diffuse, apical, myositic, and lacrimal types. Children tend to develop the anterior and diffuse types, but myositis and lacrimal inflammation may occur. Apical involvement is rare. Non-specific sclerosing inflammation of the orbit is very rare in childhood.

These syndromes present acutely or subacutely with inflammatory signs. Although apparently idiopathic, they have many features of an orbital immune reaction.7 Histologically, there is an influx of lymphocytes, plasma cells, sparse neutrophils, and macrophages. Inflammatory mediators cause edema, vascular dilatation and pain without systemic malaise. In contrast, chronic inflammations and granulomatous diseases cause mass effect as their predominant feature without clinical features of acute inflammation. The common CT profile of acute or subacute NSOIS is a poorly defined margin to the inflammatory focus, as well as contrast enhancement.8,9 With MRI, T2-weighted sequences with fat suppression and gadolinium can highlight areas of fluid accumulation indicative of inflammatory foci.

This is the most common type of NSOIS in childhood. The inflammatory process is centered on the anterior orbit and adjacent globe (Fig. 30.1). Pain, proptosis, lid swelling, conjunctival injection, and decreased vision are the main presenting features, with an onset over days or occasionally weeks. Children are more likely to have an associated anterior and posterior uveitis, which can potentially lead to misdiagnosis and erroneous treatment with topical steroid.3,10,11 The disc may be swollen.3,12 Systemically, the erythrocyte sedimentation rate may be raised, and there is often cerebrospinal fluid pleocytosis.12 Disturbances in thyroid function tests and hypothyroidism have also been reported in association with NSOIS.13,14 CT scans show diffuse anterior orbital inflammation centered on the globe, producing scleral and choroidal thickening with or without serous retinal detachment. The junction of the globe and optic nerve is characteristically obscured on CT scan with inflammatory changes extending along the nerve sheath. On ultrasound, there is a uniform-density infiltrate corresponding to sclerotenonitis, with accentuation of the sub-Tenon’s space and doubling of the optic nerve shadow producing a T-shaped shadow (or T-sign) (Fig. 30.2). 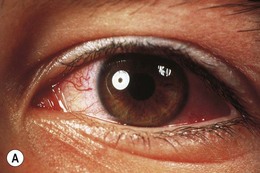 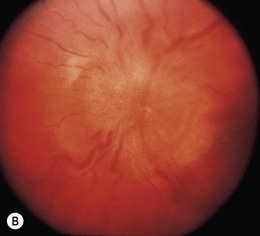 Fig. 30.1 Anterior NSOIS in a 6-year-old boy who presented with a red eye (A), pain on eye movement and decreased vision of 3 days duration. Fundoscopy (B) shows choroidal swelling and papillitis.

(Patient from the University of British Columbia.) 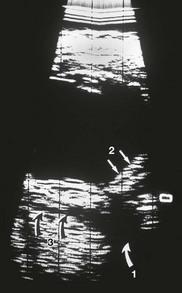 Fig. 30.2 Ultrasound scan of anterior NSOIS showing the T-sign. There is doubling of the optic nerve shadow (1), shallow retinal detachment (2) and accentuation of Tenon’s space (3).

(Patient from the University of British Columbia.)

This is clinically similar to the anterior form, although the symptoms and clinical signs are more severe (Fig. 30.3). The eye movements are more restricted and the visual acuity is worse due to serous retinal detachment and/or optic neuropathy. Inflammatory soft tissue changes permeate the whole orbit on CT scan, with a white-out appearance whose density is proportional to the severity of the clinical signs, and which resolves as the condition settles. Again, the T-sign is evident on ultrasonography. 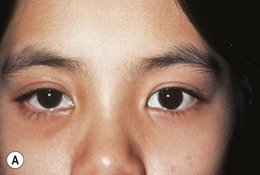 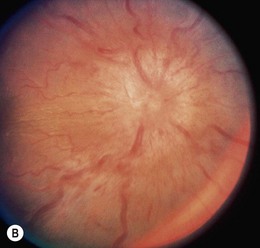 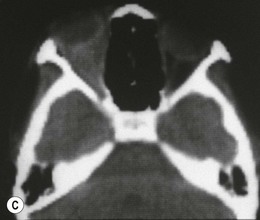 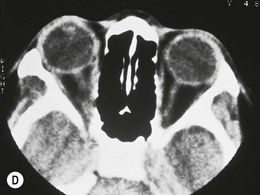 Fig. 30.3 Diffuse NSOIS in a 12-year-old girl who presented with a retrobulbar ache, associated with ptosis (A), and pain on eye movement. There was right-sided uveitis with marked disc swelling (B). On CT scanning (C), there was a “white-out” appearance of the right orbit (similar patient) which resolved after treatment with systemic steroids (D).

(Same patient from the University of British Columbia.)

The differential diagnoses include infection such as orbital cellulitis, scleritis, sudden enlargement of a pre-existing lesion such as a ruptured dermoid, hemorrhage into a venous-lymphatic malformation (lymphangioma) or malignancy which, in childhood, may be rhabdomyosarcoma, neuroblastoma, Ewing’s sarcoma, or leukemic infiltration. Anterior and diffuse NSOIS are also part of the differential diagnoses of uveitis and serous retinal detachment in childhood. Biopsy of involved orbital tissues should be considered in all but the most typical cases.

Treatment with non-steroidal anti-inflammatory drugs such as flurbiprofen is tried first. Systemic steroids may be used in addition, or as an alternative in doses for prednisolone of 1–1.5 mg/kg per day. There is usually rapid improvement in symptoms, especially pain, as well as clinical signs. Progress can be monitored by resolution of the clinical, CT, and ultrasound features. This disease may have a recalcitrant course, with frequent recurrences and steroid dependence. High-dose steroid is re-started for recurrence and tapered as quickly as clinical progress will allow, usually over a few weeks. Failure to respond suggests the need for biopsy and the renewed search for a specific etiology. Low-dose radiotherapy has been advocated for biopsy-proven cases that do not respond to steroids. Combined steroids and immunosuppressives may be necessary.

This is characterized by proptosis, pain and limitation of eye movement with diplopia, ptosis, lid edema, and conjunctival chemosis. Strabismus is often present with duction limitation in the direction of action of the involved muscle(s).15 Spasm of the affected muscle also causes restriction of the ipsilateral antagonist with a positive forced duction test. Globe retraction and narrowing of the lid fissure similar to Duane’s syndrome is a frequent finding.16,17

CT scan shows diffuse muscle enlargement with irregular margins (Fig. 30.4). The muscle enlargement frequently involves the tendon,18 in contradistinction to thyroid orbitopathy where, typically, the tendon is spared. The superior rectus–levator complex or medial rectus are the most common muscles to be involved, but any muscle can be affected, including the obliques.19 More than one muscle may simultaneously be involved and bilateral disease may occur.