The technical definition of otitis media is inflammation of the middle ear space without any reference to etiology, and, in medical terms, a chronic condition typically persists at least 3 months. Although this definition of chronic otitis media is not dependent upon underlying pathophysiology, the primary cause for middle ear disease discussed in this chapter is a dysfunctional Eustachian tube. More in-depth discussion of Eustachian tube anatomy and physiology is found in Chapter 2. Furthermore, other factors relevant to chronic otitis media, such as middle ear inflammatory conditions, microbiology, and cholesteatoma pathophysiology are also discussed in Chapter 12, Chapter 5, and Chapter 4, respectively. Thus, for the sake of simplicity, this chapter will focus on the management of chronic otitis media in terms of a perforation with inflammation of the middle ear space, retraction of the eardrum, and/or cholesteatoma.

We view CSOM as an entity with variable expression of associated signs, including otic discharge, granulation tissue, diseased mucosa, myringitis, ossicular erosion, and tympanosclerosis. Typically, the initiating event in CSOM is an acute bout of otitis media, leading to perforation of the eardrum. Persistent Eustachian tube dysfunction then allows the perforation to persist and the infection to flare up, particularly during upper respiratory tract infections or with excessive external contamination. Over time, the collective impact of pathogenic microbial colonization, reactive middle ear inflammatory mediators, and middle ear remodeling will result in a dysfunctional ear. ▶ Fig. 16.1 depicts the complex contribution of various pathophysiologic entities that lead to CSOM. 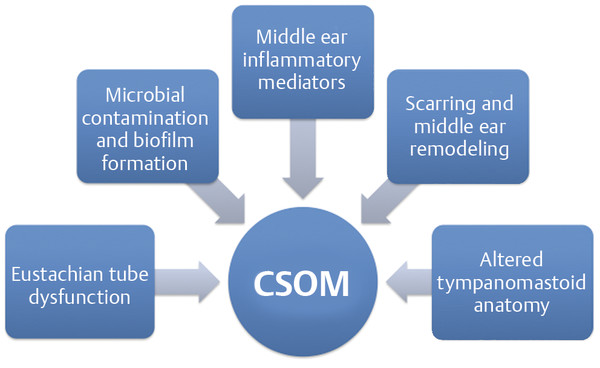 Whatever the cause, patients with CSOM usually present with hearing loss and foul otic drainage, with the possibility of pain, tinnitus, and/or vertigo, all of which follow a repetitive course of acute exacerbation and remission. Initial examination should include a thorough microscopic examination that may demonstrate disease, ranging from an ear involved with copious pus to a dry perforation. The mucosal disease or inflamed tissue may range from an ear canal filled with an aural polyp to evidence of relatively quiescent chronic inflammation, such as tympanosclerosis, myringosclerosis, ossicular erosion, and/or middle ear fibrosis. Indicators of either current or intermittent middle ear inflammation should be present for the disease to be classified as chronic otitis media.

For patients with an actively draining ear, regardless of cause, the ear should be thoroughly cleaned such that excess drainage is removed and an unobstructed view of the ear is attained; this is typically accomplished by suctioning. On occasion, suctioning is problematic for the patient due to noise and/or caloric vestibular stimulation, and so a cotton-tipped applicator may be used to absorb excess discharge. Serial examination of ears affected by severe inflammation and mucosal disease will better delineate the nature of the underlying ear after treatment has been instituted and the ear has been rendered quiet. Should a patient continue to have infection despite medical treatment inclusive of topical and systemic antibiotics, we typically perform cultures and laboratory testing for autoimmune disease or immunodeficiency.

Careful binocular microscopy of both ears will give the clinician hints about the nature of the particular chronic ear pathologic disease process and the general subtype of chronic otitis media that is in play. For example, a unilaterally diseased ear comprising an intact and mobile pars tensa with associated epitympanic cholesteatoma and scutum bone erosion (▶ Fig. 16.2) suggests an isolated atticoantral disease process. In contrast, a severely retracted pars tensa (▶ Fig. 16.3) with an associated contralateral middle ear effusion signifies a more pervasive chronic tubotympanic condition. The presence of tympanosclerotic plaque and dry fibrotic mucosa depicts a relatively quiescent but long-standing remodeling process (▶ Fig. 16.4), whereas the presence of edematous middle ear mucosa and pus (▶ Fig. 16.5) portray an acute suppurative disease process. Notice should be made of any fungal element (▶ Fig. 16.6), which is often associated with retained debris, excessive moisture, and myringitis. Lastly, it is useful to note that an aural polyp (▶ Fig. 16.7) is typically generated by chronic mucosal irritation, most commonly in the form of a foreign body reaction to retained keratin debris; thus, the presence of polyp should heighten clinical suspicion for underlying cholesteatoma. 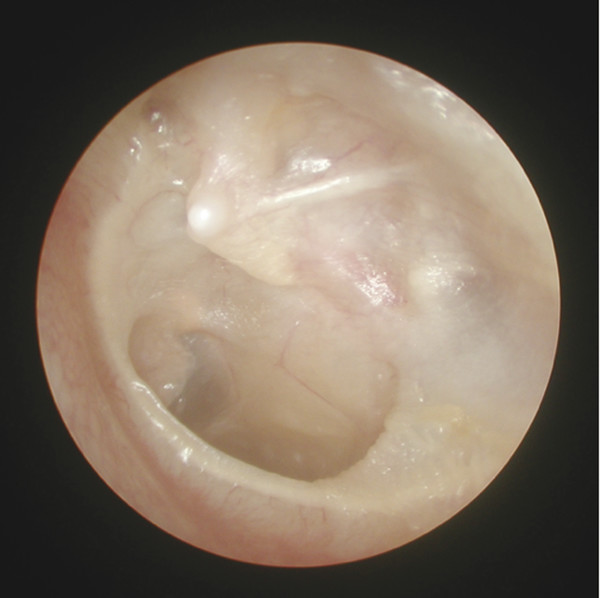 Fig. 16.3 Pars tensa retraction. Chronic retraction of the pars tensa of a left ear has led to a foreshortened malleus and middle ear adhesions. 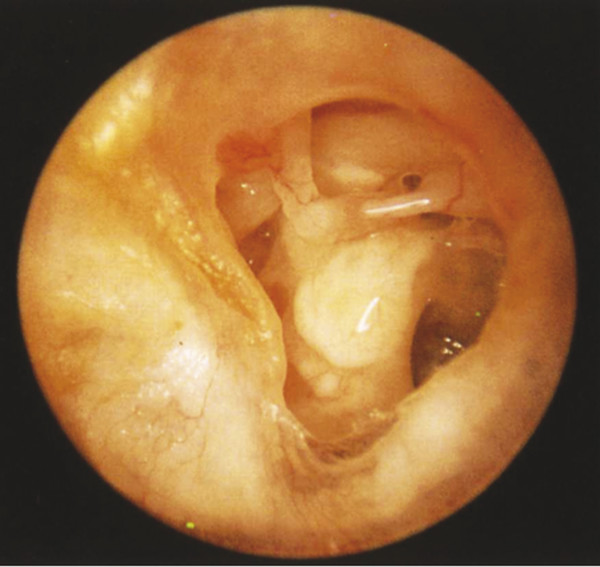 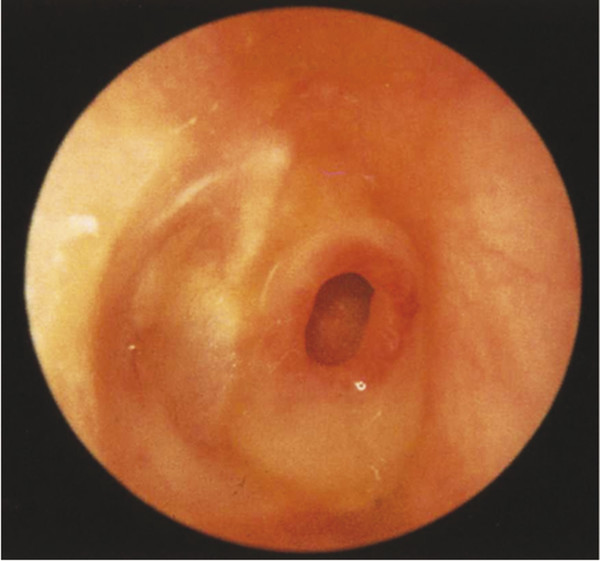 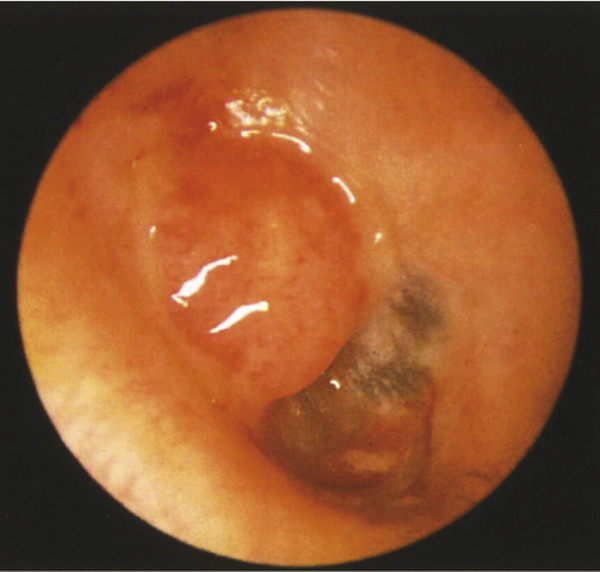 Fig. 16.7 Aural polyp. The presence of aural polyp should always heighten clinical suspicion for underlying cholesteatoma, especially when originating from the posterior-superior quadrant.

During the initial visit, we conduct a 512-Hz tuning fork examination in the form of the Weber and Rinne tests. If the patient is experiencing significant vertigo or if there is other concern about the status of the inner ear, pure tone audiometry is obtained during the initial assessment, but otherwise this may be done during the following visit once inflammatory effects have diminished. As a matter of good medical practice, we perform a thorough head and neck examination, paying close attention to the cranial nerves and potential underlying factors that may affect Eustachian tube function, such as craniofacial anomalies, rhinosinusitis, and adenoid disease. Additional effort is made to survey the patient for evidence of a complication, as outlined in Chapter 17.

The majority of patients we treat with chronic otitis media are shown pictures of their diseased ear(s) through video microscopy, and a rudimentary discussion of normal ear function and their pathology takes place. This way, the patient better understands why he or she has a hearing loss and the inherent dangers of ear disease. We believe this improves patient compliance with therapy and follow-up visits and also helps the patient better understand why surgery is being offered.

Radiologic evaluation of chronic otitis media is covered in detail in Chapter 11, but it should be noted that we have a lower threshold for obtaining radiologic imaging than what is taught in some textbooks. In particular, high-resolution computed tomography (CT) scanning is helpful in planning surgery, detecting underlying disease complications, and allowing us to more accurately counsel patients. Although imaging is not obtained in ears that are mildly diseased, we feel that it is quite important for particular situations, such as extensive mucosal disease, clinical findings suggestive of a complication, cholesteatoma of unclear extent, and persistent drainage despite medical therapy, or for patients who have had prior surgery elsewhere, syndromic patients, or patients who cannot provide a good otologic history.

Traditional arguments for not obtaining imaging of chronic ears include the idea that the surgeon should be well aware of his or her anatomy and that imaging is unlikely to change the course of surgical action. For comparison’s sake, the most experienced and skilled rhinologist in the world would likely never perform sinus surgery without preoperative imaging, despite a similar risk profile. Knowledge of a potential encephalocele with or without a cerebrospinal fluid (CSF) leak in a young patient would change the management strategy to one in which neurosurgical standby is available if performing surgery in a potential inpatient setting (▶ Fig. 16.8). Knowledge of a potential labyrinthine fistula may lead the physician to recommend a canal wall-down mastoidectomy in advance, which has a risk of poor hearing outcome (▶ Fig. 16.9). A syndromic patient may have inner ear malformation, facial nerve abnormality, or even carotid abnormality (▶ Fig. 16.10).

Fig. 16.8 Massive, erosive cholesteatoma. Imaging in cases such as these allows for improved surgical planning including planning and patient counseling. (a) displays the axial view with erosion of the mastoid cortex, ear canal, and posterior fossa plate. The coronal view in (b) reveals erosion of the tegmen mastoideum.